An Arizona State University capstone team has designed and launched a new interactive NASA Psyche mission smartphone app to engage with the public.

Available on both Apple and Android devices, the free app invites individuals to test their knowledge of the Psyche mission and various scientific concepts, along with inviting them to interact with the mission’s official timeline and view a gallery of artworks explaining the science behind Psyche. 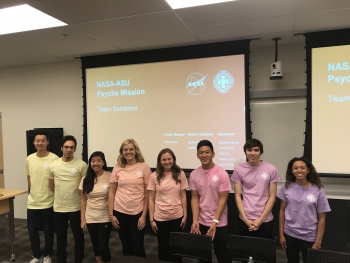 The app was developed by an interdisciplinary team of ASU senior capstone students with majors ranging from graphic design to engineering management and computer science.

Their app creates a new and unique platform to promote public engagement and knowledge about the Psyche mission.

Capstone students competed against each other in teams to develop an app that best incorporated five elements: a media gallery, links to social media, a countdown clock, a mission timeline and an engaging way to share Psyche mission information.

Each team spent their senior year creating their unique application. At the completion of this time period, teams presented their app to a panel of judges from ASU, the Jet Propulsion Laboratory (JPL), the Massachusetts Institute of Technology (MIT) and NASA. After being scored on experience, technical rubrics and presentation, the Sombrero capstone team, named after the Sombrero Galaxy, was announced as the winner.

“It was one of those moments when you pause for a minute to take it in before you burst into jumping around and yelling with your teammates,” said Sombrero team member Abdullah Alarabi, who graduated from ASU in 2018 with a bachelor’s degree in computer science and software engineering.

Even though these students came from different fields of expertise, they joined this capstone team for similar reasons.

“We chose this project because of the combination of several things: It was a mobile app, which was a skill we all wanted more experience in, it was NASA- and ASU-sponsored, meaning it would likely be well-structured, and the description seemed like such a such a fun idea with a lot of room for creativity,” Liu said.

With the goals of the project in mind, the Sombrero team came together to develop their winning application.

“Our team's designers drove the design of the app, while the developers came up with the technical implementation and having to decide what was possible to achieve within the schedule set by our project manager (Sanford),” Price said.

The designers started by creating a shared folder with inspirational images.

“As a team, we decided what graphics we tended to like or dislike. It really set the mood for the overall feel of the app and set a good starting point for mockups,” Liu said. “Their ability to incorporate overarching themes for small details was really incredible, like the navigation bar widgets, which creatively incorporated the shape of the Psyche logo.”

Because of the amount of thought and effort the team put into the design and implementation of their application, they felt prepared to present their mobile application to ASU, JPL, MIT and NASA representatives.

“Once we stood before the judging representatives, it came naturally to every one of us,” Alarabi said.

“I remember being incredibly proud with the way our app turned out and very confident and prepared with what we were presenting. Our team had a lot of fun with it, though it did help that our project manager always stressed that the presentation was mostly about sharing our experience. The team also wore shirts to match the gradient of the Psyche logo, and the reactions to that really lightened the mood,” Liu said.

After the team’s strong presentation and victory in the competition at the end of the semester, each member graduated and has gone on to professional work in their respective fields. However, the application’s journey did not end there. ASU software engineering master’s degree students Madhukar Raj and Rohit Singh, previously mobile app developers, were brought on board to refine the app for inclusion on the App Store and to make a version available for Android on Google Play, turning a college capstone project into something truly accessible to the public.

“I feel achieved, especially satisfied, and incredibly proud to watch something my team and I poured so much time, effort and passion into getting recognition. It is a great feeling of accomplishment that I hope I get to encounter often in the future,” said Alarabi, upon learning about the state of the application.

“It's kind of scary, but it is also really exciting. I remember while designing and developing the app, the team was so determined to win the competition. It seemed like we all had the mindset throughout the whole process that this would eventually be launched to the public. We never let the possibility of not winning the competition make us lazy,” Liu said.

“It's neat that my college capstone project is becoming a real product. It feels great to see something I worked on have real-world use," Price said.

With their excitement building as the publication of their app neared, Sombrero team members shared that they are proud to have worked on the project and that it helped build their team working skills immensely by allowing them to discover what working environments best suited them, and providing them with new perspectives on software design, especially in relation to consumer usage and accessibility.

In the future, the team’s app is projected to undergo updates, including gaming features developed by Psyche capstone students from 2019 and 2020 and possibly beyond. To these future capstone teams, the Sombrero team advises students to have fun with their capstone project, to break their project into workable increments, and to communicate any issues you may find with your team openly.

“This Psyche mission capstone project was a once in a lifetime journey, as challenging as it was rewarding,” Alarabi said. 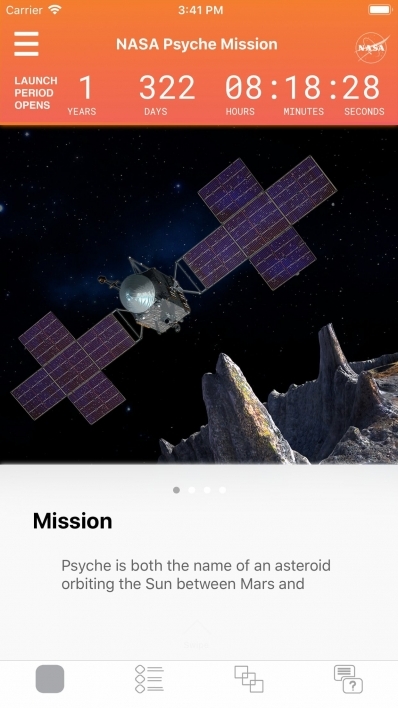 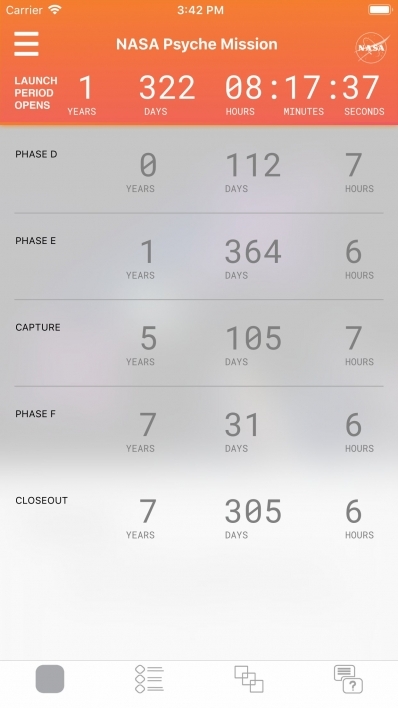 Countdown clock for the NASA Psyche Mission, one of the many features of the mission's newly launched smartphone app. 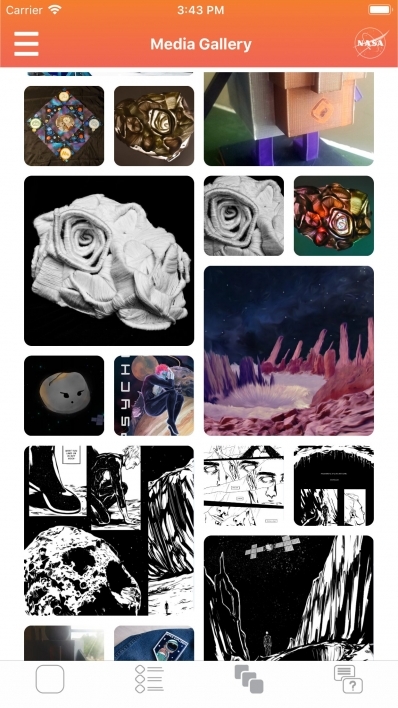 The NASA Psyche App features a media gallery of images from the mission, among other features. Check out the Game Page of the NASA Psyche App, one of the many features of this ASU student-designed smartphone app.

This article was written by Psyche mission intern Kaxandra Nessi

In the natural sciences division of The College of Liberal Arts and Sciences at Arizona State University, students and faculty explore the great unknowns of the Earth, our solar system and the universe beyond through groundbreaking research. Two new directors and one new chair will soon join the natural sciences division to lead the research being done within ASU’s School of Mathematical and St...

In the natural sciences division of The College of Liberal Arts and Sciences at Arizona State University, students and faculty explore the great unknowns of the Earth, our solar system and the universe beyond through groundbreaking research.

Two new directors and one new chair will soon join the natural sciences division to lead the research being done within ASU’s School of Mathematical and Statistical Sciences, the School of Molecular Sciences and the Department of Physics. 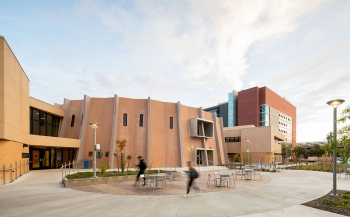 “We are eager to welcome these incredibly talented women to The College community,” said Nancy Gonzales, provost pro tempore and outgoing dean of natural sciences.

“They are each highly accomplished scholars with strong track records as leaders in their respective disciplines. They will help us advance our mission of inclusive excellence in research while leading innovative approaches to educate the next generation of leaders in science and math.” 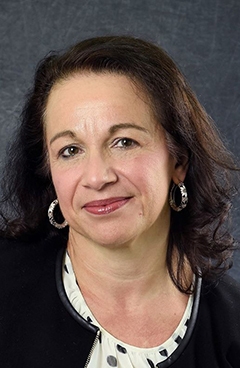 Donatella Danielli, director of the School of Mathematical and Statistical Sciences

Danielli joins The College after working as a professor of mathematics at Purdue University for nearly 20 years. Her research is in the areas of partial differential equations, calculus of variations and geometric measure theory, with specific emphasis on free boundary problems arising from physics and engineering.

Prior to joining the Purdue faculty in 2001, she held visiting positions at The Johns Hopkins University and at the Institut Mittag-Leffler in Sweden. She was also a visiting fellow at the Isaac Newton Institute for Mathematical Sciences in Cambridge, United Kingdom, in 2014.

She is a fellow of the American Mathematical Society and has received several awards and distinctions for her teaching, research and leadership including the 2020 Class of Fellows of the Association for Women in Mathematics. 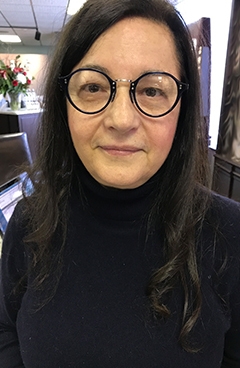 Tijana Rajh, director of the School of Molecular Sciences

Rajh joins ASU from the Center for Nanoscale Materials at Argonne National Laboratory. Her research examines colloidal semiconductor nanocrystals and their integration with biomolecules.

In her roles as a senior scientist and an Argonne Distinguished Fellow, she conceived, planned and managed the interdisciplinary research that resulted in several successful programs supported by the U.S. Department of Energy Office of Science and Basic Energy Sciences.

In addition, she served as deputy division director for the Center for Nanoscale Materials and the Nanoscience and Technology Division, where she worked on the vision for scientific growth.

Throughout her career, Rajh has been passionate about leading change in diversity and inclusion in scientific institutions. She has held roles with the Women in Science and Technology steering committee and the Diversity and Inclusion Council of Argonne National Laboratory.

Rajh received a PhD in physical chemistry from the University of Belgrade in Serbia. Her appointment as director of the School of Molecular Sciences begins July 1, 2021. Patricia Rankin, chair of the Department of Physics

Rankin comes to ASU after working as a professor of physics at the University of Colorado Boulder. Through her work, she strives to find ways to encourage broader participation in the sciences while enabling multidisciplinary teams to address complex problems like climate change.

She was the principal investigator for the National Science Foundation’s ADVANCE Institutional Transformation grant, a program with the goal to promote equity in science, technology, engineering and mathematics (STEM).

Rankin has held a variety of administrative roles throughout her career including as program officer at the NSF and as the associate dean for the natural sciences and associate vice chancellor for research positions at the University of Colorado Boulder.

She recently chaired the American Physical Societies (APS) Committee on the Status of Women in Physics and is currently an at-large member of the executive committee of the four corners section of the APS.

She received a bachelor’s degree and a PhD in physics from Imperial College London. Her appointment as chair of the Department of Physics will begin on Jan. 1, 2021.