Growing up in Albuquerque, New Mexico, within a community of people from all over the world, Arizona State University alumna Mariam Mead Yaqub felt drawn to cultural exchange from a young age.

Mead Yaqub chose to go to ASU thanks to the financial support she could receive, but she was also drawn to Barrett, The Honors College and other opportunities a large research university could provide. 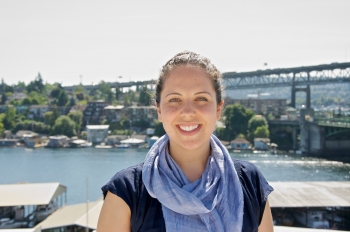 Choosing a major was a more difficult decision.

“I used to joke that I may have held the record for most number of declared majors over my time at ASU,” she said.

Mead Yaqub’s interest would soon turn to global studies, thanks to a friend who introduced her to some of the courses. She quickly realized that she found the major for her after she audited a class.

“That class made me realize my career interests lay more with global studies than with art, so I switched majors one final time.”

During her time at ASU, Mead Yaqub would take advantage of the opportunities and experiences it provided. She was connected with faculty who were leaders in their fields and people who had a wide range of backgrounds.

Mead Yaqub was able to work with organizations that advocated for the things she was passionate about, such as Community Outreach and Advocacy for Refugees (COAR), which tutors refugee students at local elementary schools.

“My dad's family was displaced by war multiple times, so the trauma of losing everything and moving to a new country was something I witnessed growing up,” Mead Yaqub said.

“I wanted to be a welcoming, friendly presence in the lives of people like my family and help them through the often-disorienting process of starting a life in the U.S.”

At ASU, Mead Yaqub also had the chance to meet the diplomat in residence – Southwest. Even though her interests always aligned with a career in foreign service, she hadn’t really considered it an option that was available to her.

“Meeting the diplomat in residence helped me learn what foreign service officers actually do, and planted a seed that this was something I could pursue.” Mariam Mead Yaqub graduated from ASU's School of Politics and Global Studies in 2008 with a BA in global studies.

Upon graduation, Mead Yaqub would earn a Master of Arts in comparative and international education at Lehigh and pursue a career in higher education, where she held a number of roles ranging from residential life to student engagement.

She was drawn to a career in higher education because she wanted to help students through a transformative part of their lives.

“My experience in college is what really drew me to that field, both the hard time I had adjusting to the transition, as well as the support and mentorship of staff and faculty," said Mead Yaqub.

However, the seed that was planted in college about becoming a foreign service officer had started to sprout. It was four years after applying with the Department of State that she was officially hired.

“It was incredibly exciting and also a little surreal, to have such a long-anticipated goal come to fruition.”

Due to COVID-19, she had a completely remote onboarding. Thankfully, Mead Yaqub was still able to build relationships during the process.

“After spending so much time in training, especially virtually, and an even longer time dreaming of working as a foreign service officer, I am excited to actually experience it and get to know my colleagues in the embassy!”

Mead Yaqub encouraged ASU students with all kinds of backgrounds and professional experiences to consider a career in foreign service. It may be a long and arduous process, but ASU can provide resources and connections to help.

“The scholarship I received, and what I learned at ASU, really shaped my path.”

After nearly three-week hiatus, @SunDevilWBB returns to action on Friday vs. Colorado

After having its last four games postponed due to COVID-19 protocols, the ASU women's basketball team returns to action on Friday (3 p.m. MST) for the first time in nearly three weeks when it hosts Colorado at Desert Financial Arena. ...

After nearly three-week hiatus, @SunDevilWBB returns to action on Friday vs. Colorado After having its last four games postponed due to COVID-19 protocols, the ASU women's basketball team returns to action on Friday (3 p.m. MST) for the first time in nearly three weeks when it hosts Colorado at Desert Financial Arena.