Hölldobler is known as one of the world’s experts in insect social behavior and ecology. A behavioral biologist, he has spent his career exploring how insect societies are organized, diving deep into the underlying mechanisms of communication. His innovative and multifaceted research has led to many new discoveries about the dynamics of social structures, communication behavior and the evolution of animals. 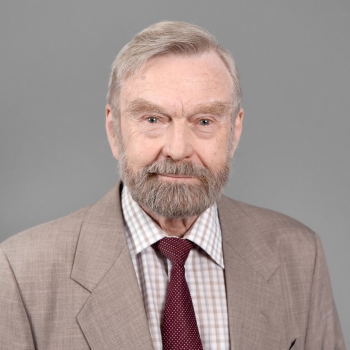 In addition to his many other accomplishments, Bert Hölldobler is also one of the founders of the ASU Social Insect Research Group, now an internationally acclaimed group studying the evolution and organization of insect societies. Download Full Image

“Bert Hölldobler’s extensive, award-winning work on behavioral biology among insects is a shining example of the innovation being done within The College,” said Patrick Kenney, dean of The College of Liberal Arts and Sciences at ASU. “We are thrilled to recognize him as the inaugural Robert A. Johnson Chair in Social Insect Research for his decades of outstanding research.”

This distinguished appointment is made possible through the generosity of ASU alumnus Robert A. Johnson, who received his PhD from ASU in zoology in 1989, where he worked with adviser Steve Rissing on a comparative study of bumblebees and ants. This launched a lifelong passion for ants, and he has traveled around the globe researching numerous species of ants, with a primary focus on desert seed-harvester ants.

“Ants are cool!” Johnson said. “They are the world’s most successful eusocial organisms, as illustrated by their occurring virtually everywhere, having a mass similar to that of all humans, and displaying an amazing array of behaviors and life histories.”

“Life has been good to me, and I am lucky and happy to be able to give back to ASU to support high-quality research via funding an endowed faculty position – the Robert A. Johnson Chair in Social Insect Research within the School of Life Sciences – with research focusing on the evolutionary ecology of ants.”

“Bob Johnson has given a great gift to ASU, (the school) and to social insect research,” said Robert Page, Regents Professor and provost emeritus for the School of Life Sciences. “It is only fitting that Bert is the inaugural recipient of the endowed chair because of the parallel interests of Bob and Bert in ant biology and the great mutual respect they have for each other.”

Hölldobler taught at Harvard, the University of Würzburg (Germany), and Cornell (where he was the Andrew D. White Professor at Large), before joining the ASU School of Life Sciences in 2004. A widely published author, he has contributed to more than 325 scientific publications and co-authored several books, including “The Ants” and “The Superorganism” with E.O. Wilson, which explores the diversity and success of social organizations in ants, and the wider implications these observations hold for the theory of social evolution.

Hölldobler and Wilson were awarded a Pulitzer Prize in 1991 for “The Ants.”

In addition to his many other accomplishments, Hölldobler is also one of the founders of the ASU Social Insect Research Group, now an internationally acclaimed group studying the evolution and organization of insect societies.

“It was one of the highlights in my professional career when I received the offer from ASU to build together with Rob Page a first-class, internationally respected research group consisting of several of the best young scholars in this field of social insect research worldwide,” Hölldobler said.

ASU has grown immensely in both quality of teaching and research since 1983, when I started my PhD,” Johnson said. “With the most important moment for me being the hiring of Bert Hölldobler and his junior faculty, which formally started the Social Insect Research Group. This group has been a phenomenal success for attacking and understanding numerous aspects of the biology of ants and honeybees.”

Johnson’s generous support for the creation of this distinguished chair position will enable many future innovations and discoveries in the fields of social insect research, animal behavior and evolution.

“We all hope that SIRGSocial Insect Research Group will continue to flourish at ASU in the future and the creation of an endowed chair due to the generosity of Robert (Bob) Johnson — himself an outstanding systematist and ecologist who studies ants — will be an immense contribution to the 'stabilization' of SIRG,” Hölldobler said. “It will also reflect the significance of social insect research to the wider academic community. I feel very honored to be chosen to be the first holder of the Robert A. Johnson Chair in Social Insect Research.”

Friday vs. #12 Wisconsin Postponed to Sunday

Friday's game postponed to Sunday at 5:30 p.m. MT due to COVID-19 developments within ASU; Saturday's game still on as scheduled ...

Friday vs. #12 Wisconsin Postponed to Sunday Friday's game postponed to Sunday at 5:30 p.m. MT due to COVID-19 developments within ASU; Saturday's game still on as scheduled