It was instead the natural result of a politically involved high school career and a proclivity toward calm, dedicated actions from a particularly well-spoken and ambitious student. 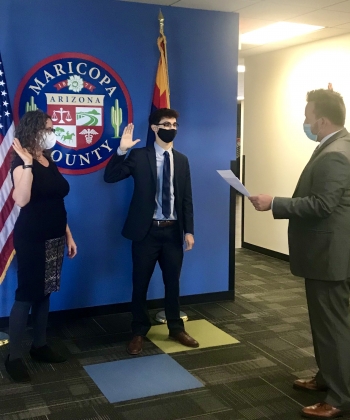 Armando Montero being sworn in, in December. Download Full Image

It was back in 2018 when Montero first approached the board with a student-led bill to increase mental health resources for students in the Tempe Union High School District. Montero, then a Desert Vista High School student, said he began to notice the lack of voice for students within their own governing body.

“A good governing board has representation that really reflects the community that it represents,” Montero said. “And when you’re overseeing close to 14,000 students, I think it’s important that at least one of those voices is someone who understands what students are going through.”

With only five board members in charge of eight separate high schools, including one online school, the Tempe Union High School District governing board has an incredible, yet often unseen, influence over the lives of many Valley students. They oversee everything from the nutrition of student meals to major curricula and budget changes.

This means that for Montero, who is striving for change in the way Tempe Union approaches the counseling and mental health of their students, the school board is exactly the place he needs to be. Though, interestingly, the idea to run was not his own.

“I was approached by a couple of community members as well as currently elected board members about the idea to run for the board,” he said. 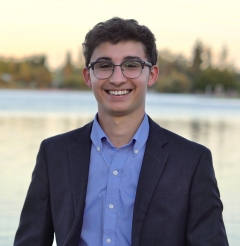 As a student involved with both his high school’s speech and debate team and Young Democrats organization, Montero had the voice and experience to give him clear goals and the ability to argue their effectiveness. All of which made him an appealing candidate. His on-campus involvement also gave him a network of fellow students who were more than willing to help his campaign succeed. That would be a decent start for any local candidate, but the 2020 election presented unique challenges.

“We really saw the shift toward social media and digital campaigning this year,” Montero said. “We were kind of in uncharted territory.”

While door-to-door canvassing was no longer an option because of COVID-19, communication through the phone was still a readily available option and one the Montero campaign had been prepared to act on regardless of what the year threw at them.

The other major challenge was Montero’s age. While a draw to many members of the community, others were less willing to accept a college student as a qualified board member.

“Being a young person in politics isn’t easy,” Montero said. “I knew that was a challenge that I was going to have to face. It takes a lot more convincing than it normally would. But I think ultimately what surprised me the most was the openness that a lot of people had when it comes to a perspective that they hadn’t really had yet.”

Montero’s age did, however, benefit him when he was attempting to garner support from other students.

“From the very beginning it felt like he had a good shot,” said Daanish Daudi, a first-year business law student at ASU who began volunteering with the Montero campaign in 2018. “Every single person I had a conversation with it was ‘Wow! He’s 19,’ ‘Wow! He’s straight out of high school,’ ‘This is a huge thing to do,’ and then when you combine that with the fact that he had people working all the time, he had people who were putting his name out there. It felt hard but definitely realistic.”

That openness and enthusiasm for Montero’s youthful perspective won him more than 40,000 votes on Election Day, Nov. 3. Those votes secured the young candidate one of the three board seats in contention during the most recent election, a reality that is just beginning to sink in for Montero.

“It’s definitely a surreal experience being sworn in as the youngest person that’s ever been elected to this office in the city of Tempe,” Montero said. He was sworn into office on Dec. 10. “I think it’s a good boost to student representation that really needed to be had in the city.”

His fellow board members are also optimistic for his term. Berdetta Hodge, the current president of the Tempe Union governing board, said that she was looking forward to serving with Montero.

“His perspective as a recent student will help guide the district to continue providing the highest quality of service for our TUHSD family. It has been a true pleasure to witness Board Member Montero’s growth from a high school freshman to a governing board member,” Hodge said.

Montero’s position is proof that college students are both qualified and capable of being involved in politics and representing themselves.

“You want to see people who have your same interests, have your values in mind,” Daudi said. “A student advocating for students on a school board, it just makes the most sense to me.”

Next up for @SunDevilHoops: Oregon State Saturday at 4 p.m. PT on Pac-12 Network

Next up for @SunDevilHoops is a Saturday 4 p.m. PT tilt at Oregon State on Pac-12 Network. ...

Next up for @SunDevilHoops: Oregon State Saturday at 4 p.m. PT on Pac-12 Network Next up for @SunDevilHoops is a Saturday 4 p.m. PT tilt at Oregon State on Pac-12 Network.