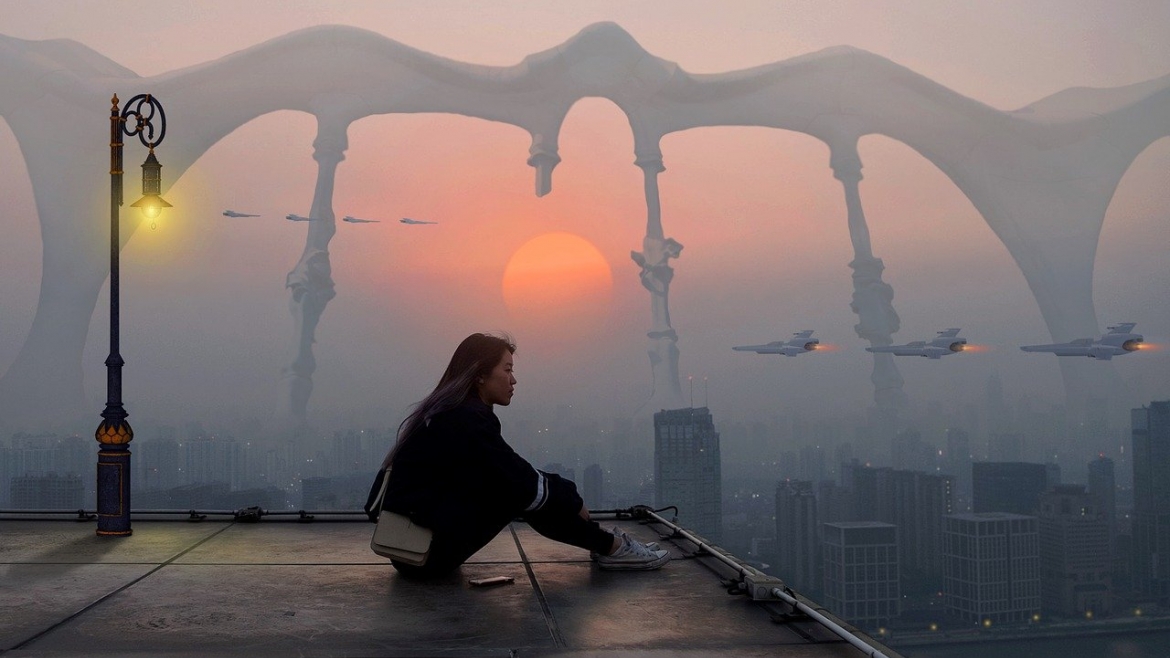 In a year of change, a new anthology examines the future of urban life

Cities were changing before the pandemic. Big cities, like London and Mumbai, India, were becoming bigger. Coastal cities, like New York, Miami, and Venice, Italy, were armoring up against sea rise.

But after COVID-19 struck, something new happened. People fled cities for the suburbs and countryside. The capability to work remotely has been around for a few years, but now millions of people embrace it as their lifeline. Rents in the country’s most expensive cities, like New York and San Francisco, have dropped and vacancies have risen.

What will cities look like in the future? That’s the idea behind "Urban Infrastructure: Reflections for 2100," a new anthology co-authored by Arizona State University engineer Mikhail Chester, an expert on preparing infrastructure for coming challenges.

What functions will cities serve? Who will live in them and why? Forty experts from around the world shared their reflections for cities in the year 2100 in a series of science fiction short stories, essays and poems. The goal of the book isn’t to make Alvin Toffler descriptions of the future. Instead, it is to provide a dialogue and visions of what we could hope for. Or fear.

The theme of decentralization comes up in the book: Tesla is building its own charging stations for its electric cars. Is it still just a car company or is it an energy provider too?

Question:  Were there any common themes that arose in the book about possible forms cities might take in the future?

Answer: The people were pretty colorful in terms of how they approached it, right? Some people put together board games or some people profiled citizens of the future. There were some common words, the ones that you would expect — sustainability, resilience, adaptation, transformation, stuff like that, that came up. But I don't think people zeroed in on a particular physical form. … We had a lot of colorful interpretations of a world that's changing fast and how cities and infrastructure need to be able to respond to that.

Q: Anything that surprised you, that came out unexpected?

Q: What will be the dominant forces shaping the future?

A: The dominant force will be change. It'll be how quickly infrastructure is able to respond to change. If it can't respond quickly, it'll become obsolete. If it can respond quickly, it'll have a chance. So, you know, that is antithetical to the way that we have been building for the past hundred years since the industrial era, which has been an emphasis on rigidity, which leads to things like armored (cities). But the future seems to be more and more marked by chaos in the sense of surprise, uncertainty, volatility, accelerating conditions — all of these things coming together create a landscape of unknown, right? Which sort of means surprise. And if we continue with these mental models, we can predict the future we're going to build ourselves into trouble. We're going to build ourselves into obsolescence.

I'm not saying that things will collapse and unravel, but our public services and infrastructure will not be able to keep up with what we need them to do. And that will probably lead to more and more other types of services inserting themselves and creating a very different landscape for how we have access to things. Case in point being Amazon, right now introducing drone delivery service. Why are they doing that? Is this simply because drones are cool, and they could fly it from a warehouse to your home? Sure. That's part of it. But also I think nested in that investment is the idea that they're building their own infrastructure, right? Their basic public infrastructure, as we know, is probably not going to be sufficient for what we need.

Jacob “Jack” Fuchs, who began his teaching career when Arizona State University was still Arizona State Teachers College in 1952, died Jan. 3 at the age of 97. Fuchs’ career at ASU included roles as a chemistry professor, professional timpanist and sportsman.“Jack was a phenomenon, he was the longest serving faculty member at ASU, joining the faculty before ASU was a university in its pres...

Jacob “Jack” Fuchs, who began his teaching career when Arizona State University was still Arizona State Teachers College in 1952, died Jan. 3 at the age of 97. Fuchs’ career at ASU included roles as a chemistry professor, professional timpanist and sportsman.

“Jack was a phenomenon, he was the longest serving faculty member at ASU, joining the faculty before ASU was a university in its present form,” said Ian Gould, director of ASU’s School of Molecular Sciences. “Even after he retired Jack was still a regular visitor to the school, keeping in close contact with school activities, consulting with the advising team to help with transfer credits and striding through the corridors with a smile and a sprightliness that belied his age. He was a much-loved member of our community.” 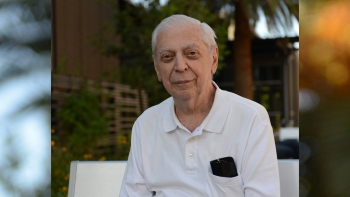 Fuchs was born on May 7, 1923, in New York City to Sandor and Irma Fuchs. He knew at a very young age what he wanted to be when he grew up.

“When I was 7 or 8, I said I was going to be a chemist,” Fuchs previously said. “I had chemistry sets, but they didn’t have what I wanted, so my father took me to Eimer & Amend, a chemical supply store in New York.” Once the clerk at Eimer & Amend was satisfied that this young boy knew how to handle the more advanced chemicals, the sale was made.

In June 1944, Fuchs was awarded a BA in chemistry from the Heights Campus of New York University and by that time he had already spent three months in basic training in the army at Camp Croft, South Carolina. After serving in Europe as a combat infantryman with the 79th Infantry Division, he was discharged on Halloween in 1945. A blind date on New Year’s Eve in 1946 brought Rose Lochansky into his life and they were married six months later. Then it was off to the University of Illinois-Urbana-Champaign for graduate study. Fuchs received a MS in chemistry in 1947 and a PhD in analytical chemistry in 1950, followed by an additional 18 months of postdoctoral training.

Fuchs had planned to be a bench chemist, but his life was changed forever after he taught his first class as a graduate assistant at the University of Illinois-Urbana-Champaign.

“Even after only one semester, I decided teaching was for me,” he said.

Teaching jobs were scarce, so when word came to Illinois that there might be a job in Arizona, Fuchs’ colleagues suggested that he look into it. 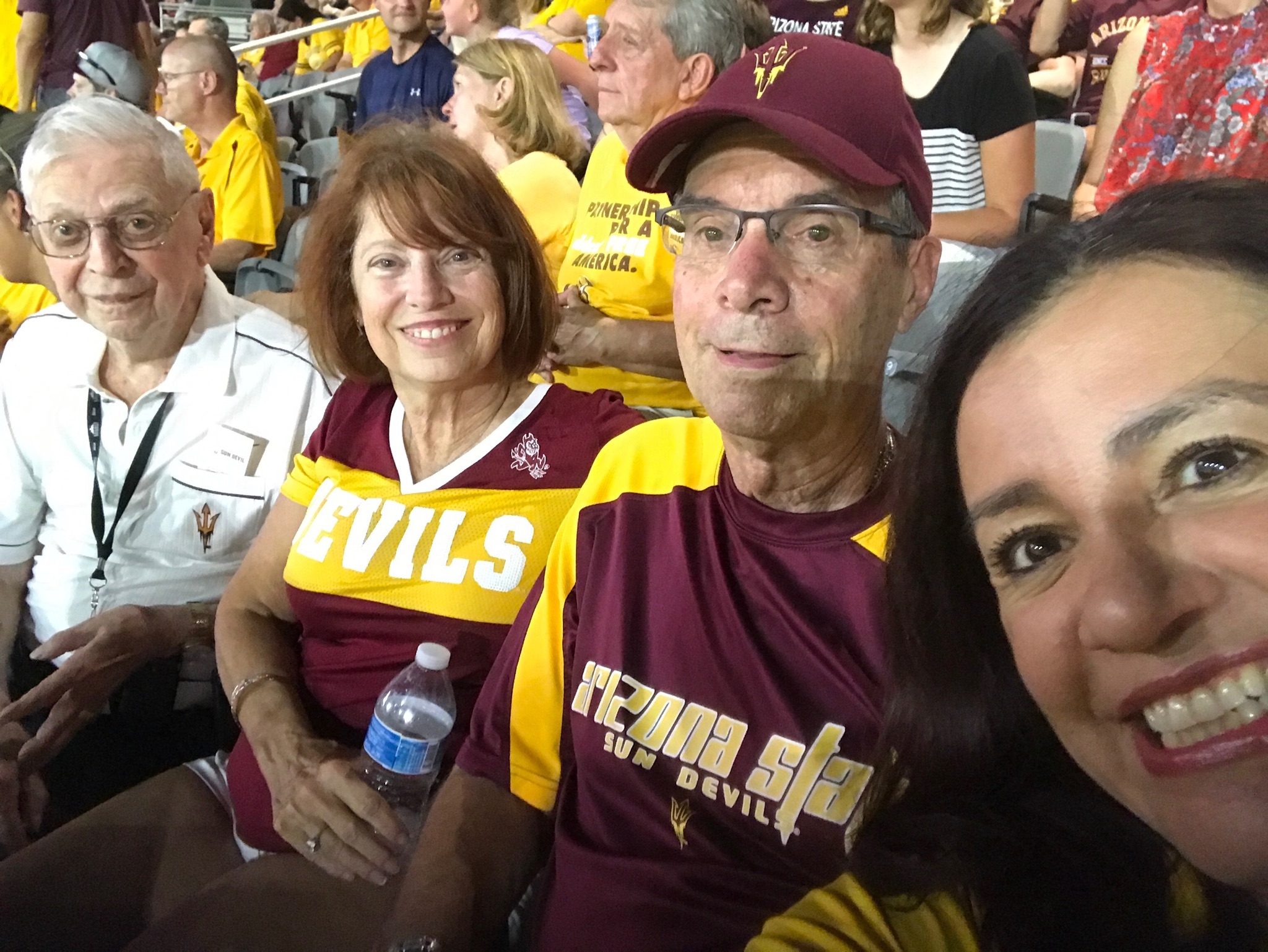 Jack Fuchs and family at an ASU football game. 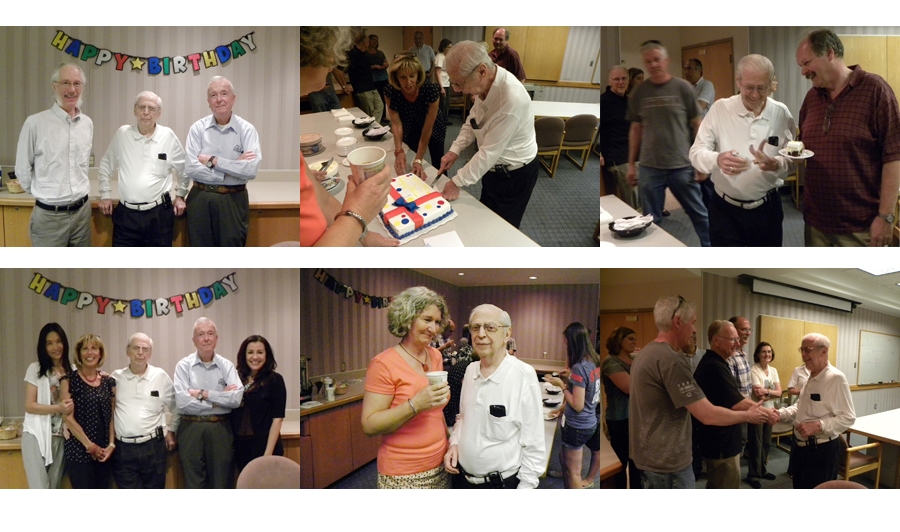 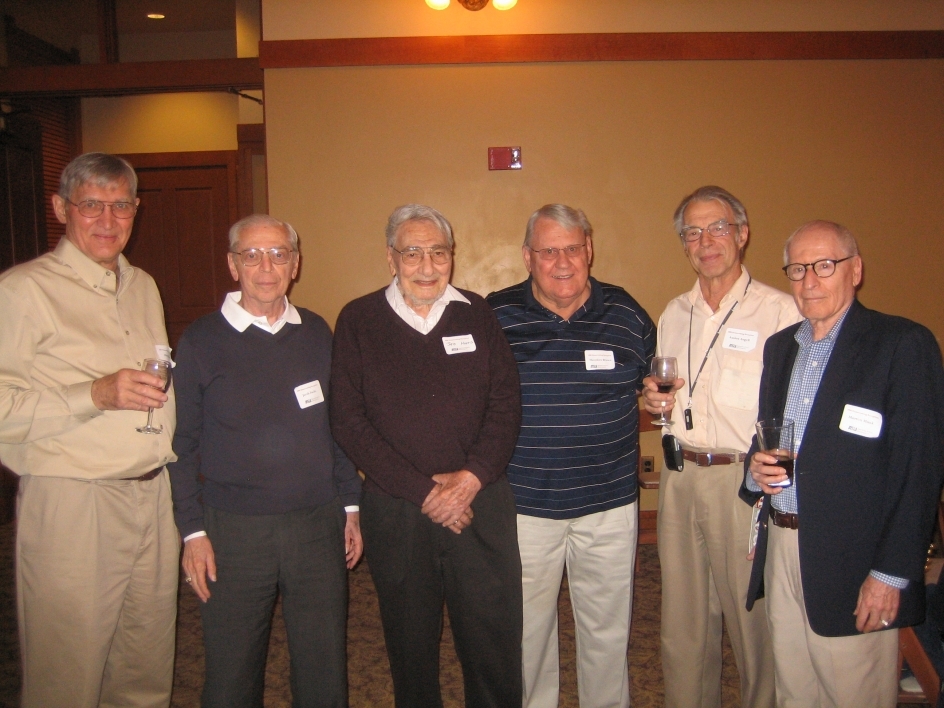 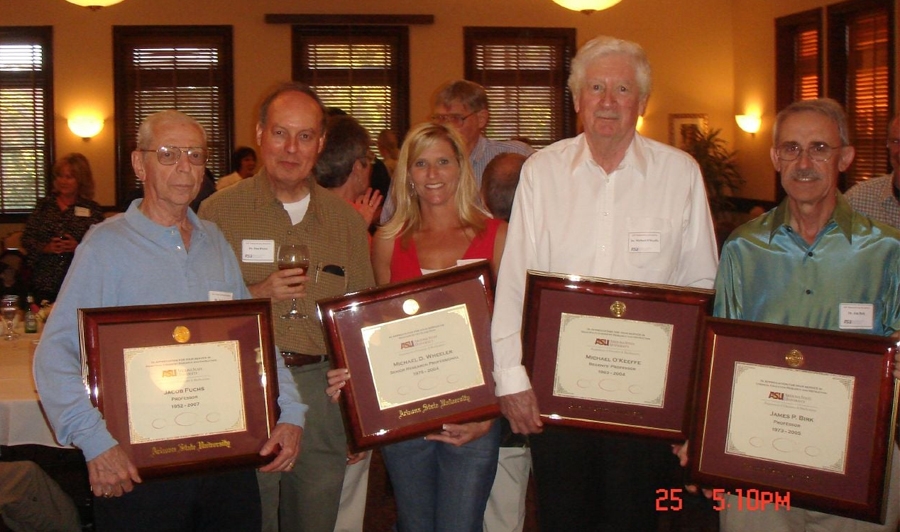 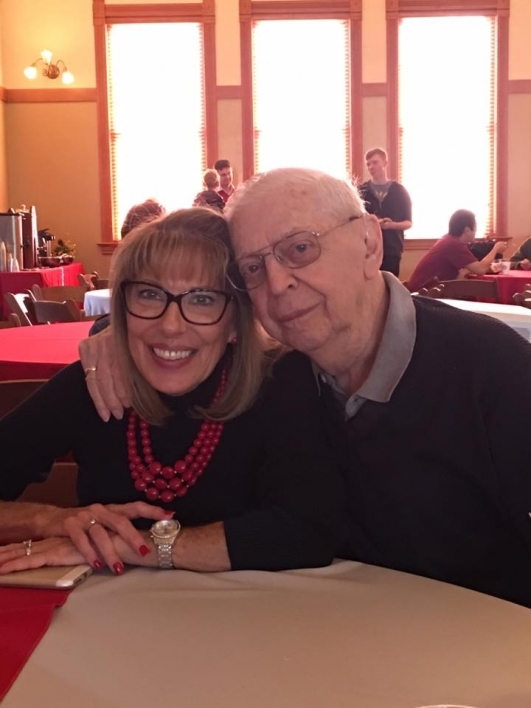 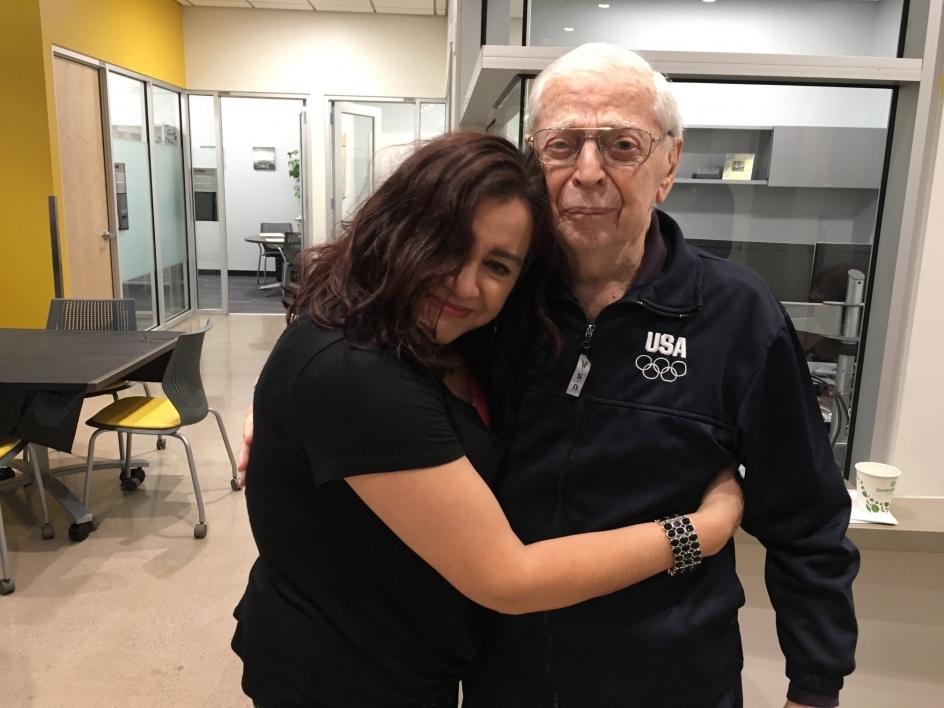 “Jack was an early pioneer in establishing a meaningful graduate program in chemistry at ASU. After approval of the doctoral program, Jack continued as its guiding force,” said Emeritus Professor Morton Munk. “He received his PhD from the University of Illinois and knew what was required to build a solid graduate program. He understood the importance of mentoring and nurturing graduate students and devoted himself to the task. Jack established a nationally recognized summer program in Instrumental Analysis for industrial chemists that ran for many years. Jack was also a well-rounded citizen in the community. He was a serious musician and the timpanist of the Phoenix Symphony."

He was principal timpanist with the Phoenix Symphony from 1952 to 1979, with guest artists such as Dame Margot Fonteyn, Jack Benny, Pablo Casals and Andres Segovia, then played with the Sun Cities Symphony Orchestra from 1983 to 2002.

“Music was as much a part of my life as chemistry,” Fuchs said.

“There was a time when ASU had a faculty tennis team,” Fuchs said. “There was a civic league, and we’d play a match every weekend.”

Fuchs also played with the legendary ASU coaches Frank Kush, Bobby Winkles and Ned Wulk, and together they were a formidable foursome.

Kush said of Fuchs: “He was really active and involved with programs at ASU. He was one of those individuals who always cared about his students and made sure they were going to be successful.”

And, “his tennis game was as good as his intellect,” added Kush, who lost to Fuchs more than once on the court.

“Jack was executive officer, i.e., assistant chair, for LeRoy Eyring when I joined the faculty, a position he held for many years," said Regents Professor Peter Buseck of the School of Molecular Sciences and the School of Earth and Space Exploration. "He was unerringly kind and helpful at a time in my career when I felt relatively insecure.

“This was especially true because I thought I had been hired into the geology department rather than also being an assistant professor of chemistry. Jack’s door was always open, and he was generous with his advice whenever asked. His spectroscopy course attracted people from many institutions and helped give our department good visibility.”

Fuchs is survived by his daughter, Tara Roesler, as well as his grandson, Alexander, and granddaughter, Kimberly; his daughter-in-law, Debra, and grandchildren Jennifer Masse and Robert Tischler; and great grandchildren Jaeden, Zoe, Blake and Ryker. Fuchs was preceded in death by his wife and his son, Gary. 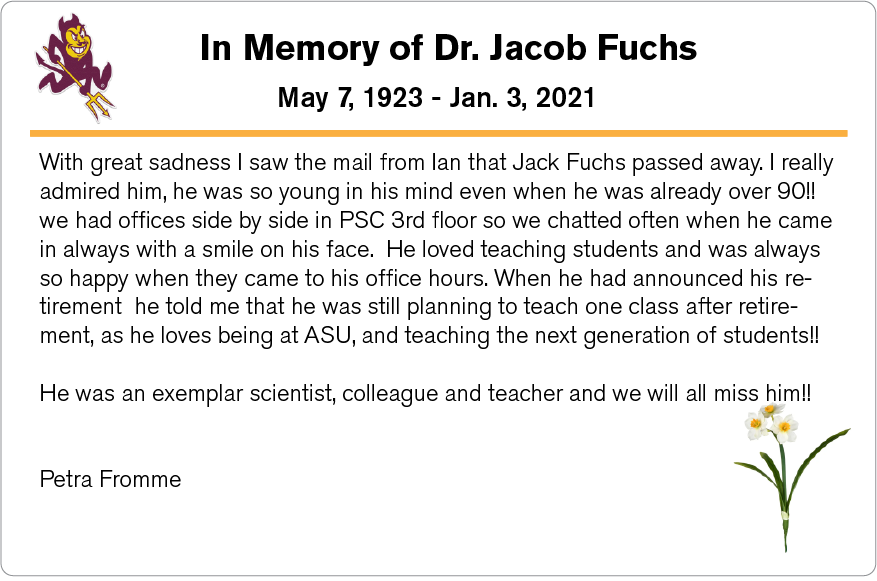 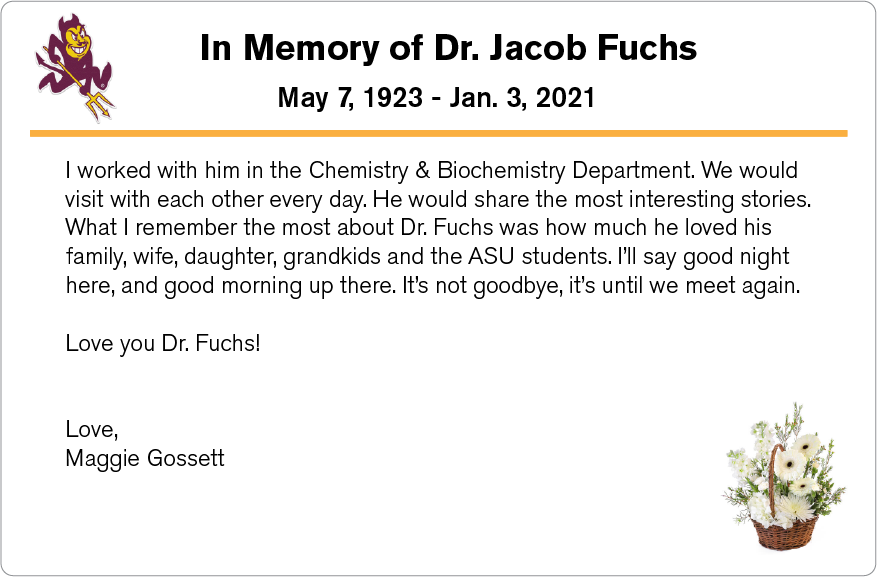 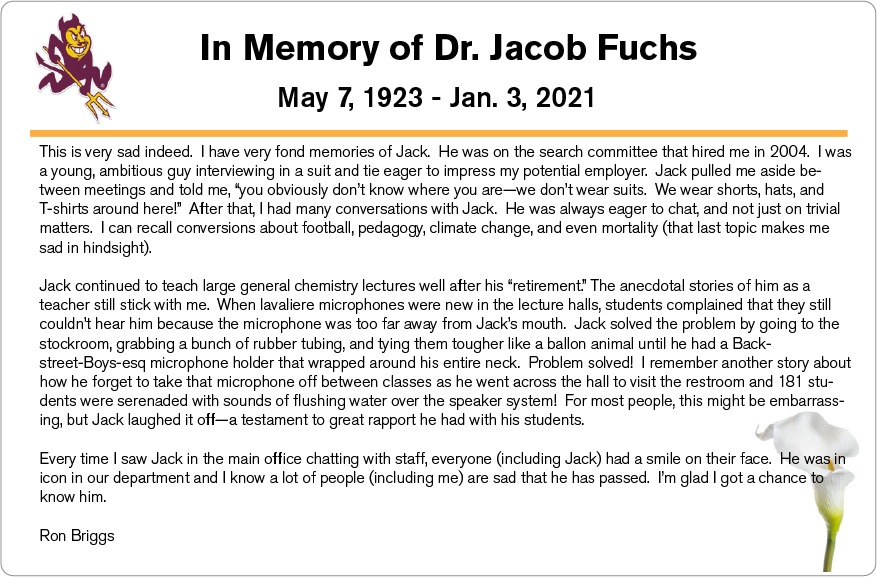 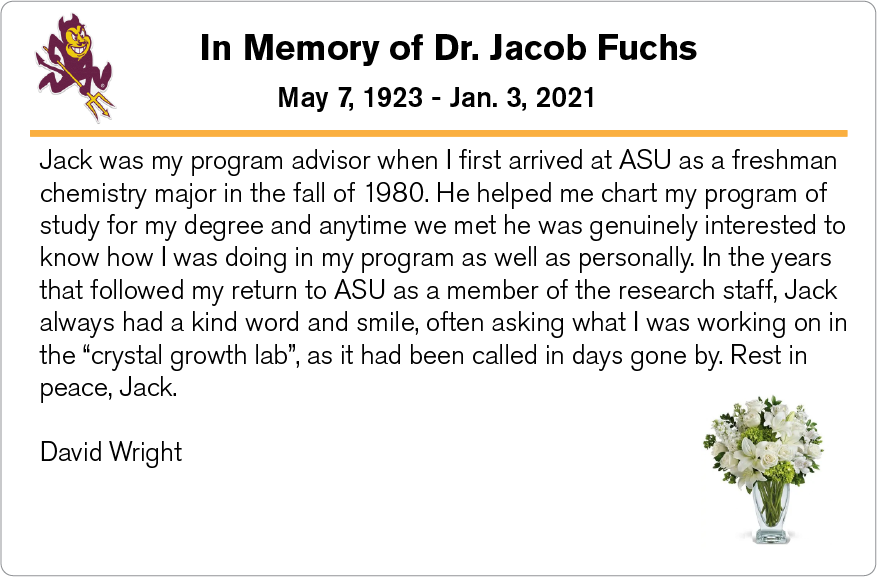 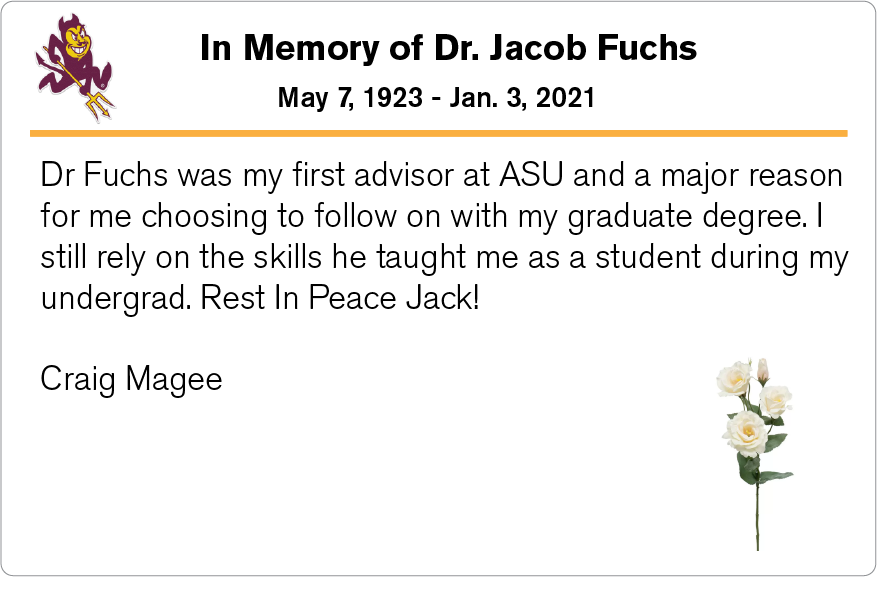 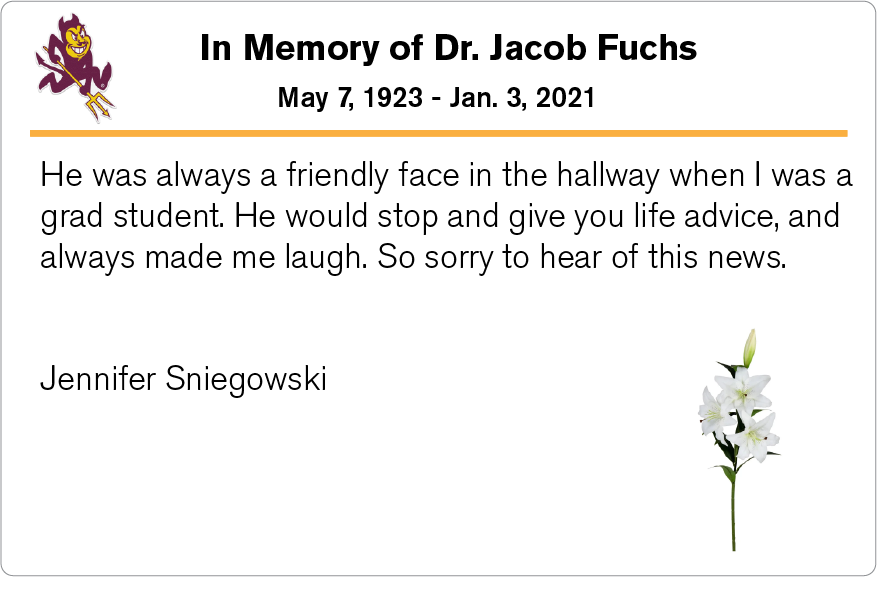