Simon Ortiz, a Regents’ Professor of English and American Indian Studies at Arizona State University, has been selected to receive the 2013 Golden Tibetan Antelope International Prize. He will be honored in China, along with Syrian poet Adonis (Ali Ahmad Said Esber), at the Qinghai Lake International Poetry Festival on Aug. 7-12.

Of the award Ortiz says, “I am truly honored and humbled to receive the Golden Tibetan Antelope Prize. As a member of the Aacqumeh hanoh – Acoma people-nation – I humbly regard this award as a gesture of honoring from one community of people to another community of people, because this act represents the respectful recognition of each other culturally, socially, spiritually and politically.” 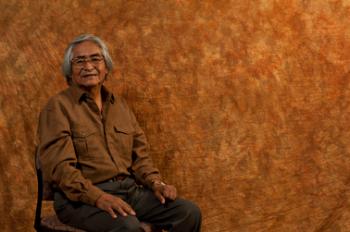 Ortiz is a major voice in the 20th-century literary movement termed the “Native American Renaissance.” Raised on the Acoma Pueblo reservation in New Mexico, he worked in uranium mines and processing plants, joined the U.S. Army and studied chemistry before focusing on his writing. Ortiz earned an honorary doctor of letters degree in 2002 from the University of Iowa in recognition of his many academic and literary accomplishments in poetry, fiction, creative non-fiction, essay and children’s literature.

“As a poet, storyteller, orator and chronicler, I am often overcome by the power of language to form and shape thoughts, provide ideas or concepts, and to effect change in people and society,” says Ortiz. “And I am overcome by the beauty of language to change human beings so that human beings can truly appreciate the life that surrounds them and to change human society for the better.”

In 1982, he won a Pushcart Prize for his work “From Sand Creek,” and most recently his book “Going for the Rain” was published by the Tsinghua University Press, Beijing as a bilingual edition (English and Chinese). There are plans to develop a Chinese translation of a compendium of three of his earliest poetry collections, “Woven Stone,” considered by some to be his “spiritual autobiography.”

While Ortiz’ research interests have largely focused on the cultural, social and political dynamics of Indigenous peoples of North, Central and South America, his insights cut across cultural and ethnic boundaries with literary perspective as a guide.

“The power of language resides in the beauty of spirit that comes about when we change ourselves into helpful, generous, understanding, compassionate and thoughtful human beings who benefit others,” notes Ortiz. “If I am anything as a poet, I must always try to be a human being who is helpful to others, for that also is the power of language: to encourage ourselves always to be helpful to others.”

New research from the ASU's Biodesign Institute aims to improve the effectiveness of a Salmonella-based vaccine by modifying its ability to survive the hostile environment of the stomach.

The troublesome invader, however, can be turned to human advantage. Through genetic manipulation, the species S. Typhi can be rendered harmless and used in vaccines in order to prevent, rather than cause illness. 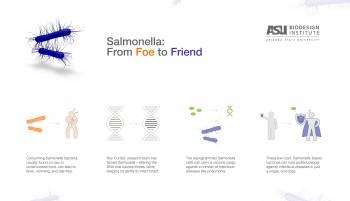 In new research, reported in the Journal of Bacteriology, lead author Katie Brenneman and her colleagues describe efforts to improve the effectiveness of a Recombinant Attenuated Salmonella Vaccine (RASV) by modifying its ability to survive the hostile environment of the stomach.

“Even though wild-type strains of Salmonella are quite capable of surviving the acidic environment of the stomach, it is surprisingly difficult to deliver a live Salmonella vaccine orally,” Brenneman says. “Many vaccines have mutations that leave them especially vulnerable to low pH, which means a large proportion of the vaccine cells are killed before they reach the intestine, and thus are unable to do their job of delivering vaccine targets to the immune system. We’re trying to compensate for that increased acid sensitivity by increasing expression of the normal acid resistance systems.”

Further, the acid resistant vaccine strains may behave more like unmodified Salmonella, which are cued by low pH conditions to prepare for the later stages of the infection process by up-regulating a key suite of genes involved in host interactions. These factors, the authors suggest, may significantly improve the effectiveness of Salmonella vaccines.

At the Biodesign Institute’s Center for Infectious Diseases and Vaccinology at ASU, researchers have been harnessing Salmonella’s impressive ability to infiltrate human tissues and stimulate immune responses, producing Salmonella-based vaccines targeting a range of illnesses.

The center is under the direction of Roy Curtiss III, whose team has been genetically modifying the pathogen in efforts to produce a new breed of safe, efficient and cost- effective vaccine.

Salmonella vaccines offer great potential in meeting growing needs for effective protection against existing and emergent threats. One such vaccine – designed by the Curtiss group and currently in Phase I FDA trials – targets infant pneumonia, a disease that continues to kill some 2 million people per year, many of them in the developing world. Other RASV’s are in various stages of development.

Such vaccines are attractive for a number of reasons. They can typically be produced much more cheaply than conventional vaccines, they may be delivered orally rather than through injection and can confer long-term immunity without the requirement of a subsequent booster dose. Further, Salmonella powerfully stimulates both cellular and humoral immunity, producing a robust, systemic response in the vaccine recipient.

The basic idea behind RASVs is to genetically retool the Salmonella bacterium in such a way that it retains its strong, immunogenic properties without causing illness. It is then outfitted with antigens for the particular disease the vaccine is designed to protect against. This Trojan-horse method introduces the disease antigens hidden in the Salmonella carrier, which then stimulate the immune responses.

But as the authors of the current study explain, the promising technique – potentially applicable for vaccines against virtually any pathogen – is not without its challenges. One of the most significant hurdles concerns the ability of Salmonella to survive the harsh environment of the stomach, where highly acidic (low pH) conditions prevail.

Naturally occurring, unmodified Salmonella have evolved sophisticated strategies of acid tolerance and acid resistance that allow them to survive the stomach environment. By contrast, modified Salmonella strains cultured in the laboratory are weakened or attenuated to improve their safety. The process has the negative effect of greatly reducing Salmonella’s acid tolerance.

A number of features allow normal Salmonella to survive low pH conditions. Two of the most important have been studied in some detail. The first is known as the acid tolerance response (ATR) and the second, the arginine decarboxylase acid resistance system. The latter of these mechanisms is not expressed in Salmonella cultured for vaccine use and the remaining ATR system is often insufficient to protect bacterial cells from stomach acid.

One approach to the problem has been to protect the vaccine strain from low pH conditions by shrouding it in an enteric capsule. Alternately, vaccines have been administered in conjunction with an antacid to lower stomach pH, (typically with sodium bicarbonate).

These strategies improve the survival of vaccine strains but have the disadvantage of depriving Salmonella of encountering the low pH environment, which acts to signal the bacteria that they have entered the host environment. These signals stimulate the upregulation of genes to help Salmonella survive the next phase of infection in the intestine, where it is threatened by short-chained fatty acids, antimicrobial peptides and osmotic stress. Further, induction of normal acid tolerance response improves Salmonella’s ability to invade epithelial cells in the intestine.

In the current study, researchers attempted to restore acid tolerance in modified Salmonella at pH levels of 3 and 2.5 in order to overcome the loss of tolerance imposed by three common gene mutations used for RASVs. To accomplish this, a hybrid version of the arginine decarboxylase acid resistance system was created. This system was not only capable of inducing acid resistance in cultured Salmonella cells, but could be tightly controlled by means of a special promoter, triggered by the presence of the sugar rhamnose.

Use of the rhamnose promoter to induce acid resistance allows cultured cells to be prepared to withstand the low pH rigors of the stomach. Following the initial stages of infection, the bacterial cells expend their storehouse of rhamnose and their acid resistance is then rapidly downregulated.

Experiments confirmed that the rhamnose-regulated system could indeed rescue Salmonella from exposure to low pH conditions and that it provided bacterial cells with an equivalent degree of protection from acidic environments to the native arginine decarboxylase system.

The three acid unadapted mutants used in the study all showed significant improvement in survival at pH conditions of 3 and 2.5. The results open the door to the efficient and cost-effective creation of highly acid resistant vaccine strains that can exhibit fine-grained control under a rhamnose promoter and can be produced on demand. Allowing vaccine strain exposure to low gastric pH should further improve performance, by triggering virulence genes necessary for subsequent survival and colonization in the intestine.

“In future studies, we will need to validate that this system, or other similar systems under construction, will improve the immunogenicity of an RASV,” says co-author Ken Roland. “This work is ongoing, but I can tell you that we have preliminary data supporting the idea that our rhamnose-regulated arginine decarboxylase system can significantly enhance the immunogenicity and protective immunity of an RASV.”