Professor honored for 4 decades of seminal research in urban climatology

Anthony J. Brazel, ASU professor emeritus, has received the Helmet E. Landsberg Award for 2013 from the American Meteorological Society’s Board on the Urban Environment. The AMS is this country’s primary professional society for atmospheric scientists.

“Tony’s recognition by the American Meteorological Society highlights the prominent recognition his work has garnered across a spectrum of geophysical disciplines,” said Randall Cerveny, ASU President’s Professor and climatologist in the School of Geographical Sciences and Urban Planning. “His research papers, with topics that include everything from Phoenix urban dust storms to the intricacies of urban climate energy fluxes, are some of the most highly regarded works by geographical climatologists.” 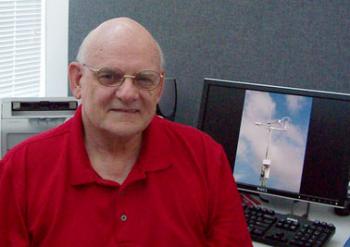 This award is named after Helmut E. Landsberg, a climatologist and Presidential Medal of Science winner who modernized how climate data are used to help solve societal problems. Among other accomplishments, Landsberg made ground-breaking connections between climate and urbanization by helping advance the study of urban climates from a descriptive study to one of physical understanding. In selecting Brazel for the award, the society notes the ASU professor’s “fundamental contributions to the field of urban climatology, especially those related to understanding urban heat islands in desert environments.”

Brazel’s work in desert urban climatology began soon after he became director of ASU’s Laboratory of Climatology and governor-designated Arizona State Climatologist in 1979. “With new realizations of climate change at this time, there arose many applied and fundamental research opportunities for colleagues at ASU to investigate the role of urbanization and climate change” said Brazel. “The “research laboratory” was right in front of us – Phoenix, Ariz.”

As state climatologist, a position he held until 1999, Brazel and his colleagues worked closely with stakeholders ranging from the National Weather Service, to the Arizona Department of Environmental Quality, water and energy provider Salt River Project (SRP), and city and county organizations. In the 1980’s, Brazel helped establish a partnership between SRP, ASU, and the State Climate Office that focused on improving short-term weather forecasting models applied to urban areas. Collaborations such as these catalyzed urban climate research, rooted in Phoenix-area and Arizona climate issues, but with implications for the understanding of urban climate globally.

“A simple literature search shows nearly twice as many peer-reviewed research articles dealing with Phoenix’s urban heat island as there are for either New York City or Houston,” comments Winston Chow, a research fellow in ASU’s Department of Engineering, College of Technology and Innovation, with a concurrent appointment in the National University of Singapore’s Department of Geography. “This flourishing of research in Phoenix is in large part due to Brazel’s success in advancing partnerships between ASU and local stakeholders.”

“Another important aspect of his work,” Chow adds, “is his dedication to geographical fieldwork. Tony has trained numerous students to value the importance of its proper practice, which is key to excellent research."

”Brazel’s work in urban climatology – particularly in desert urban climatology – over the last four decades has, quite literally, shaped the fundamental concepts and themes for current research into this increasingly vital and important scientific and social topic,” observes Luc Anselin, Regents’ Professor and School of Geographical Sciences director

Brazel is an emeritus professor in the School of Geographical Sciences and Urban Planning, an academic unit of the College of Liberal Arts and Sciences. In 2010, he received the Association of American Geographers Climate Specialty Group Lifetime Achievement Award. Brazel remains as a senior sustainability scholar with ASU’s Global Institute of Sustainability, is editor of the Journal of the Arizona-Nevada Academy of Science, and serves on the Editorial Board of the Annals of the Association of American Geographers.

Brazel will receive the Landsberg Award at the society’s national meeting, which takes place in Austin, Texas, Jan. 6-10, 2013.

Line up the marching band and put the finishing touches on the floats because ASU Homecoming is quickly rolling into town.

Line up the marching band and put the finishing touches on the floats because ASU Homecoming is quickly rolling into town.

“Sun Devil Homecoming: A Golden Decade” will bring to life the technology, innovation and leadership that skyrocketed Arizona State University to one of the top universities in the world. 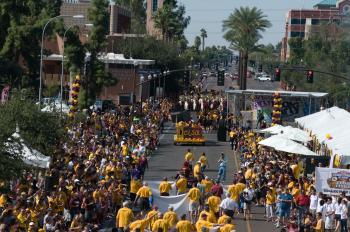 President Michael Crow will serve as grand marshal at the annual parade that will make its way down University Drive at 9 a.m., Oct. 27. The block party will begin immediately after and is set to feature a variety of exciting booths for the entire family.

The celebration will lead up to the Homecoming parade and block party on University Drive on Oct. 27, and culminate with the ASU vs. UCLA football at noon in Sun Devil Stadium. Tickets may be purchased in person or by calling the Sun Devil Ticket Office at 480-727-0000.

In preparation for daylong extravaganza, the university will host a series of exciting events happening Oct. 23-27.

Parking lots and structures in the northern portion of campus (north of University Drive) are open five hours prior to kickoff for prepaid season ticket parking passes, and cash lots are open three hours before kickoff. For more information on parking, visit http://cfo.asu.edu/pts-event-football or http://www.millavenue.com/transportation.

For details and a complete schedule of Homecoming events and activities, visit http://homecoming.asu.edu.