Lawrence Krauss, an Arizona State University Foundation Professor in the School of Space and Earth Exploration and the Department of Physics, has been elected to the International Academy of Humanists.

The academy, which includes Nobel laureates James Watson and Steven Weinberg, sociobiologist Edward O. Wilson and author Salman Rushdie as members, is limited to 80 persons. It was established in 1983 to recognize distinguished humanists and to disseminate humanistic ideals and beliefs. Once elected, laureates are members for life. 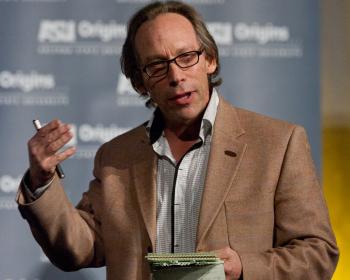 Members of the academy are committed to free inquiry in all fields of human endeavor, a scientific outlook and the use of the scientific method in acquiring knowledge and promotion of humanist ethical values and principles.

“I was taken completely by surprise when I received the news of this election,” said Krauss. “The mission of the academy is something I support wholeheartedly, and I was humbled to learn that laureates of the academy include such a remarkable group of individuals. It is an honor to be included among them.”

Krauss is internationally known for his work in theoretical physics and cosmology, and is a well-known author and science communicator. His research covers science from the beginning of the universe to the end of the universe. His research interests include the interface between elementary particle physics and cosmology, the nature of dark matter, general relativity and neutrino astrophysics.

In addition to being a Foundation Professor, Krauss is the director of the Origins Project at ASU, which explores key questions about our origins, who we are and where we came from, and then holds open forums to encourage public participation.

Krauss is the only physicist to receive major awards from all three U.S. physics societies: the American Physical Society, the American Institute of Physics and the American Association of Physics Teachers. In 2012 he was given the Public Service Award from the National Science Board for his efforts in communicating science to general audiences. Last year he was awarded the “Roma Award Urbs Universalis 2013” by the Mayor of Rome.

Krauss has authored more than 300 scientific publications and nine books, including his most recent best-seller, "A Universe from Nothing," which offers provocative, revelatory answers to the most basic philosophical questions of existence. It was on the New York Times best-seller list for nonfiction within a week of its release.

Krauss also wrote the international best-seller "The Physics of Star Trek," an entertaining and eye-opening tour of the Star Trek universe, and "Beyond Star Trek," which addressed recent exciting discoveries in physics and astronomy, and takes a look at how the laws of physics relate to notions from popular culture. A book on physicist Richard Feynman, "Quantum Man," was awarded the 2011 Book of the Year by Physics World magazine in the UK.

Krauss has been a frequent commentator and columnist for newspapers such as the New York Times and the Wall Street Journal. He has written regular columns for New Scientist and Scientific American, and appears routinely on radio and television. Last year, he was featured with Richard Dawkins in a new full-length film documentary, "The Unbelievers," which is billed as a “rock-n-roll tour film about science and reason.”

Krauss also serves as a co-chair of the board of sponsors of the Bulletin of the Atomic Scientists, on the board of directors of the Federation of American Scientists and is one of the founders of ScienceDebate2012.

The School of Space and Earth Exploration and the Department of Physics are academic units in ASU's College of Liberal Arts and Sciences.

Three ASU students committed to making a positive social impact have been selected to participate as finalists in the Social Venture Partners Fast Pitch Competition on March 26 at the Tempe Center for the Arts.

Three ASU students committed to making a positive social impact have been selected to participate as finalists in the Social Venture Partners Fast Pitch Competition on March 26 at the Tempe Center for the Arts. The Fast Pitch competition is a high-energy, rapid-fire presentation event where students will have an opportunity to share the mission, vision and impact of their innovative idea with an audience and judges.

The student teams were selected through an exclusive opportunity for ASU Innovation Challenge applicants. Innovation Challenge is an opportunity for undergraduate and graduate students from across the university to make a difference in our local and global communities through innovation. Team leaders Joshua Watson, Ashley Brennan and Jasmine Anglen will participate in a rigorous pitch training development program culminating in the selection of one team to win $2,000 and present at the Fast Pitch Competition event in March.

The ASU selected teams are:

All Walks– Jasmine Anglen, team leader
All Walks educates college students and the community about the commercial exploitation of women and children, and helps combat the issues of sex trafficking in the United States and aid its victims.

"I am absolutely honored to represent Local Exchange, Global Exchange in the Social Venture Partners Fast Pitch Competition," says Ashley Brennan. "As a finalist, I am continually inspired by individuals and organizations also committed to positive social change."

All three student groups have also applied to attend Clinton Global Initiative University (CGI U), hosted by Arizona State University from March 21-23. CGI U is an annual event that brings together students and world leaders to address global challenges with practical, innovative solutions.

“It’s always difficult to narrow our list of applicants in the semifinal phase because each year we are reminded of the many innovative nonprofits that are doing great work in the Valley – most of the time without fanfare or adequate resources,” said Terri Wogan, executive director of Social Venture Partners Arizona. “We are excited to be a resource to help build and improve these organizations, and to see them compete in our signature competition this spring.”

Tickets for the March 26 event at Tempe Center for the Arts can be purchased online.