Arizona State University students are invited to take the field with the Sun Devil football team for the Pigskinpalooza and the Movie on the Field event at Sun Devil Stadium on Thursday, April 19.

The first-ever Pigskinpalooza, which starts at 5:30 p.m., gives ASU students the chance to connect with Sun Devil Athletics while at the same time getting the opportunity to participate in activities on Frank Kush Field. Students attending the event will be able to punt, pass and kick with Sun Devil football players.

Following the interactive portion of the event will be the Movie on the Field, as a screening of "The Blind Side" will take place at 8 p.m.

There will be food available in addition to prizes and giveaways from local businesses throughout the evening. In addition, students are encouraged to bring snacks and blankets for the movie.

The event is open to ASU students with a valid Sun Card, and each student is allowed to bring one guest.

Playing without a conductor – and with Menahem Pressler

When Sarah Schreffler learned that she would be co-concertmaster with New York-based violinist Curt Macomber in a chamber orchestra concert in ASU Gammage, it just couldn't get any more exciting. Or could it?

Playing without a conductor – and with Menahem Pressler

When Sarah Schreffler learned that she would be co-concertmaster with New York-based violinist Curt Macomber in a chamber orchestra concert in ASU Gammage, it just couldn’t get any more exciting. Or could it?

But then it did. Schreffler learned that the chamber orchestra would be performing without a conductor, and with world-renowned pianist Menahem Pressler as soloist. 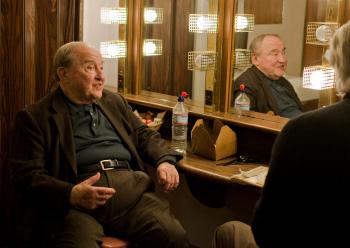 And that the orchestra, comprised of ASU students, would be coached by Maestro James DePreist, director emeritus of conducting and orchestral studies at The Juilliard School.

And that noted flutist Virginia Taylor from the Australian National University in Canberra would be stopping in to help coach the student orchestra.

For music students, it would be difficult to determine which part of the concert would be more exciting. But playing Beethoven and Mozart with a concertmaster leading the way, instead of a conductor, would definitely be a challenge.

For Gary Hill, director of ensembles at the ASU School of Music in the Herberger Institute for Design and the Arts, the evening with Pressler and Macomber was an event nearly a year in the making, and an opportunity to provide ASU students with a rare opportunity to learn how to play better in an ensemble.

For members of any ensemble, the key to making better music is learning to listen to the other parts and understand how they all fit together, Hill said.

“How do you learn to listen to a whole group? First you need to know the music. The musicians need to study the score and be familiar with their own part. Complete ownership of their own part is mandatory, because all spare cognitive energy must be devoted to listening and watching other players.

“Additionally, having access to a score – either a printed copy or an online version – quickly answers most questions and saves a great deal of discussion during rehearsal time.”

Hill added that in the “ideal world,” ensemble musicians playing in any ensemble with a conductor would be watching and listening to one another, as well as paying attention to the conductor.

“The difference in a non-conducted setting is that when any aspect of the performance begins to fail – e.g., rhythmic synchronization, textural balance, intonation, etc. – there is no conductor to step in and quickly settle the matter. Instead, the musicians must come to collective agreement and solve the problem ‘on the fly.’"

The concert with Menahem Pressler as soloist came about through a long-term partnership between ASU Gammage and the School of Music.

“We’ve partnered with ASU Gammage to bring in musicians such as Philip Glass and Regina Carter,” Hill said. “It’s part of ASU Gammage's giving back educationally.”

Nearly a year ago, Michael Reed, director of cultural participation for ASU Gammage, met with Pressler’s agent to discuss the possibility of a concert at ASU. When a date was set, Hill and Kimberly Marshall, director of the School of Music, started talking about which ensemble should play with Pressler.

Hill suggested that since Pressler made his name playing with the Beaux Arts Trio, ASU should “do this as a chamber music experience.”

So, Hill asked the studio faculty for student nominations, and they responded, nominating more students than could be accommodated.

“We had more terrific students than we could use,” Hill said. “We selected 20 strings, several pairs of woodwinds and percussion – 36 all told. This enabled us to bridge the gap between a small ensemble and a full orchestra.”

Pressler’s agent suggested that ASU bring in Macomber to help prepare the students for the conductorless experience, so Macomber came to Tempe in early December to meet with the student musicians and talk about tempo, bowings and other aspects of the works they would perform. He also gave a master class for violin students.

During the first week of the semester, Taylor, who also plays with the Australian National Chamber Orchestra, met with the students and talked about “how you use your ears and eyes to read each other,” Hill said.

Then, DePreist, who lives in the Valley, coached the ensemble in two rehearsals, then Macomber returned for two more rehearsals. The last two rehearsals were with Pressler himself. “All told, there were just 10 rehearsals before the students met with Pressler,” Hill said. “The students outdid themselves. They were very well prepared, and professional – and excited.”

Schreffler, who has played in conductorless ensembles before, said, “The cool thing about it is that it allows everyone to take on a more proactive role in the music making. Communication among the orchestra members increases as people have to listen to, watch, lead, and follow musicians or sections they might not normally have to.

“You really start to listen closely; in a conductorless group, everyone seems to have a greater awareness of all the individual parts and how they come together to form the entire piece.”

Sitting next to Macomber, Schreffler said, was “a great experience. He plays beautifully and is a thoughtful and engaging leader who is clear and easy to follow. It was easy to play not just alongside him, but together with him, and that ease extended to the entire orchestra.”

And playing with Pressler, she added, “was a privilege, and the experience is one I will always remember. His sound is special – warm, intimate, and like no other. He really knows the music – not just in his mind, but in his heart. He knew precisely how he wanted the piece to sound, and guided the orchestra with kind words and beautiful playing.”

Hill decided, at the beginning, to have one woodwind faculty member play with the ensemble to guide the wind section. Elizabeth Buck, professor of flute, volunteered.

“The experience was eye-opening for many students, especially for the wind instrumentalists, since having a faculty member as a principal player in the midst of the orchestra provided a level of professionalism that was new to them,” she said. “I believe they ‘rose to the occasion’ and they worked hard to maintain a high level of consistency throughout the rehearsal period since there were other guest conductors and musicians who coached and listened as well."

Some of the students were, in fact, nervous about having a professor in their midst, Buck said, “but in the end, they came away with exactly the kind of real world experience that most of them wish to pursue: performing at the highest levels with leading musicians in our field and without a conductor.”

So what did Pressler, who made his American debut with the Philadelphia Orchestra in 1946, think about playing with a university ensemble?

“I found them to be ‘a big and happy surprise’ in two ways,” Pressler said: “Their caliber as instrumentalists, and their complete willingness to be a part of something more than playing the notes but recreating a masterpiece, which can be dangerous but rewarding.”

Buck was pleased and honored that “Pressler remarked about the high level of wind playing and he treated everybody collegially and respectfully.

“He made frequent eye contact with the orchestra and insisted that this was chamber music, making music intimately while listening and responding to the soloist. His gestures and phrasing were so eloquent and sublime that the students were inspired to match his level of expertise.”

Pressler, born in Magdeburg, Germany, in 1923, fled Nazi Germany in 1939 and emigrated to Israel. His world-renowned career was launched after he was awarded first prize at the Debussy International Piano Competition in San Francisco in 1946. The ASU Gammage program included Mozart’s Concerto G Major 453 and Beethoven’s 2nd Piano Concerto.