Chad Waltz, a graduate student at Arizona State University, has been selected as a Tillman Military Scholar for the 2012-2013 academic year.

In 2008, the Pat Tillman Foundation established the Tillman Military Scholars program to support educational opportunities for servicemembers and military families by bridging the financial gaps left by the Post-9/11 G.I. Bill. As a result, Tillman Military Scholars receive financial support to not only cover traditional study-related expenses such as tuition and books, but also other needs, including but not limited to: housing, transportation and childcare. 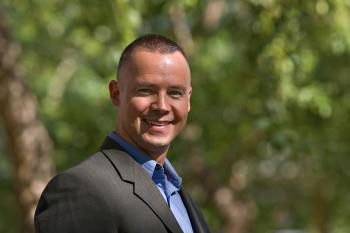 Waltz is currently working toward a master’s degree in social work in the College of Public Programs. He first became aware of the scholarship opportunity while searching for information about Pat’s Run on the Pat Tillman Foundation’s website. After going through the application process, Waltz’s application was put before the committee and selected along with one other student from ASU.

“I was completely moved and blown away by the board recognizing and selecting me. I consider it to be a tremendous honor to represent the Tillman Foundation,” said Waltz.

During his time in the military, Waltz served two years in the Navy after finishing high school, spent time in the Army National Guard and, from 2003 until the present, has been a member of the Air National Guard.

A proud supporter for advocacy and education among the military community, Waltz is currently interning with Vets4Vets, an organization specializing in peer support for veterans who have experienced mental trauma while in combat. He says that the experience gained while working for the non-profit has further ignited his passion to give back to the veteran community.

“I ultimately want to work as a professional within the military in their mental health core, and assist with trauma and those who are coming back from war with serious mental illnesses and readjustment issues,” he said. “In my internship we have vets from all walks of life and it is great to help with the integration back into society.”

Coming from a military family, both Waltz’s grandfathers served in the Korean War, and his father served in the Vietnam War. His wife is in the Navy Reserve and is currently deployed on a mission scheduled to return in February of 2013. Although he knew the separation would be difficult, Waltz says he most anxious about how the couples 16 year-old daughter would react to the news.

“I was concerned with how she would handle the departure of her mother and the challenges of it just being father/daughter time, but she has been a joy. She is committed to academics and is heavily involved in sports,” said Waltz.

Through his partnership with the Pat Tillman Foundation, Waltz is looking forward to giving back to the military community that has continually supported his family through many deployments. He is also interested in serving as an example for other veterans who may be considering getting an education.

ASU and the Pat Tillman Foundation have chosen two students to be Tillman Military Scholars for the 2012-13 academic year.

Arizona State University and the Pat Tillman Foundation are pleased to announce two students have been selected as Tillman Military Scholars for the 2012-13 academic year.

Chad Waltz, a member of the Air National Guard, is currently working toward a master’s degree in social work at Arizona State University. A proud supporter for advocacy and education among the military community, Waltz currently assists with an organization specializing in peer support for veterans who may have experienced mental trauma while in combat. Through his partnership with the Tillman Foundation, Waltz is looking forward to serving as an example for others who may be considering getting an education. 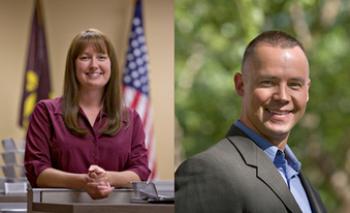 Casaundra Wallace, a United States Army veteran, will study at the Sandra Day O’Connor College of Law in the fall. She is considering focusing her studies in the public policy arena on either environmental law or Indian law. Wallace, a student worker in the Pat Tillman Veteran Center, sees the Tillman Military Scholar designation as an opportunity to give back the veteran community.

ASU is one of 14 campuses serving as a Tillman Military Scholar University Partner for the 2012-2013 academic year. University partners are selected based on their innovative servicemember-specific support services and proven culture of community for military families.

“As part of ASU’s initial screening committee, we had the very tough job of going through 42 applications, and forwarding only the top 10 to the Pat Tillman Foundation for final selection. We were very excited to hear that Chad and Casaundra were chosen – they both stood out as exceptional candidates,” said Christian Rauschenbach, Veteran Services program manager.

In 2008, the Pat Tillman Foundation established the Tillman Military Scholars program to support educational opportunities for servicemembers and military families by bridging the financial gaps left by the Post-9/11 G.I. Bill. Military families face numerous challenges during the transition from military to civilian life and have unique needs that often prevent successfully completing a degree. As a result, Tillman Military Scholars receive financial support to not only cover traditional study-related expenses such as tuition and books, but also other needs, including but not limited to: housing, transportation and childcare. In providing this support, the Pat Tillman Foundation aims to remove obstacles that would otherwise prohibit academic success.

“We received 1280 applicants this year and, with support from our selection committee, narrowed these applicants down to 59 outstanding candidates to join the fourth class of Tillman Military Scholars,” said Hunter I Riley, director of programs at the Pat Tillman Foundation. “These Scholars represent leadership in the military, classroom and community and we’re proud to invest in their education and support them in making a positive impact into the future.”

About the Pat Tillman Foundation

Family and friends established the Pat Tillman Foundation following Pat’s death in 2004 while serving with the 75th Ranger Regiment in Afghanistan. Created to honor Pat’s legacy and pay tribute to his commitment to leadership and service, the Pat Tillman Foundation is a national leader in providing educational support and resources to veterans, active servicemembers and their spouses. Inspired by Pat’s attributes of leadership, passion for education and spirit of service, the Foundation annually awards educational scholarships through the Tillman Military Scholars program. Since the Foundation’s inception, over $5 million in educational support has been invested in individuals committed to a life of service both in an out of uniform, including over $3.2 million awarded to 230 Tillman Military Scholars nationwide. For more information, visit: www.pattillmanfoundation.org.