When Aaron Landsman watches a city council meeting, he doesn’t see a boring gathering of local politicians who talk a lot of municipal mumbo jumbo. Rather, he views it as great theater.

“Unlike national politics, council meetings are amazing in that things actually get done by people who disagree with each other,” said Landsman. Landsman’s “City Council Meeting: The Complicated and Ironic Maneuvering of Politicians” will kick off the spring 2013 Humanities Lecture series, which is hosted by ASU’s Down School of Letters and Sciences on the Downtown Phoenix campus. The lecture and 25-minute demonstration is scheduled for 6:30 p.m., Feb. 7, at the Walter Cronkite School of Journalism and Mass Communication, 555 N. Central Ave., room 128. The lecture series is free and open to the public. All public parking in the downtown area is free after 6 p.m.

“City Council Meeting” is an engaging and participatory theatrical adventure created by Landsman, director Mallory Catlett and designer Jim Findlay, all of whom are based in New York City. The team visited local city council meetings in San Antonio, Portland, New York and Tempe to create a production that allows audience members to become actors, actors observers and elected officials to do both as the performance takes attendees to the intersection of life and theater.

“Hopefully everyone who attends will view council meetings with a different lens so that we can see how we govern ourselves in a new way,” Landsman said.

Landsman makes theater for many kinds of spaces. His work and plays have been commissioned and produced in Oslo, Minsk, New York, Detroit, Houston and Lund. Also an actor, Landsman has performed with Elevator Repair Service Theater since 2004 and appeared in the work of many directors and choreographers. He teaches workshops for artists nationwide.

For more information on the spring 2013 Humanities Lecture Series, call Mirna Lattouf at 602-496-0638 or email her at Mirna.Lattouf@asu.edu.

Robert W. Durrenberger, a professor of geography at ASU from 1971-1982, passed away on Oct. 20, 2012 at the age of 94. Durrenberger, already a nationally-known climatologist when he arrived at ASU, will be remembered at ASU for establishing the position of Arizona State climatologist at the university, as well as helping develop ASU’s climatology program into an internationally-recognized center for teaching and research. He’ll also be remembered for his research and insights into environmental challenges presented by rapid population and economic growth of the American Southwest.

When he arrived at ASU in 1971, Durrenberger was well-known as a geographer with a focus on arid land research, environmental problems, agricultural geography and the United States southwest. He had been professor at San Fernando Valley State College (now California State University – Northridge) since 1956, where he had also served as department chair and dean of graduate studies. 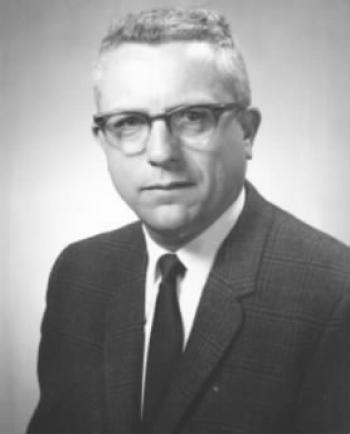 He arrived at ASU at a time when the federal government was turning over responsibility to maintain state climate records and assist with state-focused climate questions from NOAA to the individual states. Durrenberger worked to establish Arizona’s State Climatology Program at ASU, and in 1973, the state named Durrenberger as Arizona’s first state climatologist. At the same time the Arizona Board of Regents also established of the Laboratory of Climatology, an independent unit at ASU with a mission to serve the public, state agencies and businesses of Arizona by maintaining historical climate data for Arizona and conducting research in climate-related issues. Durrenberger held the position of Arizona State climatologist until 1979.

In his role as state climatologist, Durrenberger authored numerous publications specifically relevant to Arizona, including studies of precipitation, historical storms and floods, drought, and climate and energy in various regions of the state. After stepping down from his post as state climatologist, he focused on solar energy development, directing a project to assess Arizona’s solar energy resources and authoring a report on a solar radiation monitoring system for Arizona.

While at ASU, Durrenberger published a dictionary of the environmental sciences, and played a role in a wide range of other professional activities. Just as a sample – he published a paper in the Annals of the Association of American Geographers that presented opportunities and challenges for the Colorado Plateau as an economic frontier for energy development, spoke at an International Geographical Union Symposium on “Urbanization in Arid Lands,” and served as editor-at-large for The National Weather Digest. He also served on the executive board of the Solar Radiation Division of the American Section of the International Solar Energy Society.

Minnesota State University in Moorehead, where Durrenberger earned his undergraduate degree, presented him with its 1977 Distinguished Alumni Award, citing his contributions in education, climatology, and service to state and federal governments.

After his retirement in 1982, Durrenberger settled in Sun City, Ariz., where he enjoyed golfing, playing bridge, and spending time with friends and family.  He is survived by his wife of 66 years, Bernadine A. Durrenberger, his daughter, Mary Ann Marasco and her husband Mike, as well as 3 grandchildren and 2 great-grandchildren. His son, Dan Durrenberger, preceded him in death.