Career in forensic science starts at ASU for New Yorker

It has been approximately two months since she left Long Island for Arizona State University’s West campus to begin work on a bachelor’s degree in forensics. What does Arielle Herguth miss about her hometown? 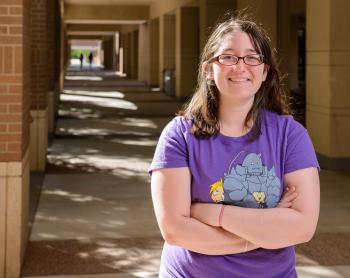 “I really miss the Chinese food from New York, believe it or not,” she confessed. “And I miss my family, of course. However, I’m so glad I was able to come here, go to these awesome classes and this wonderful school, and meet all of the spectacular people who have become my friends and have taught me so many cool things since I came here.”

Herguth is contemplating a career path that leads to a position as a medical examiner. While pursuing a bachelor’s degree in forensics through ASU’s New College of Interdisciplinary Arts and Sciences, she also is taking advantage of the opportunities offered by Barrett, the Honors College, which recruits academically outstanding undergraduates from across the state and nation, and is active on all four ASU campuses.

When it came time to choose a college, Herguth considered Yale University, Duquesne University and the University of New Haven. But after an ASU campus visit, she decided to make the move to Arizona. “I felt like everything was designed specifically to make sure students are prepared for the world outside school, and that the professors and staff were more than happy to help make that happen,” Herguth said about her perceptions of her ASU visit.

Now that she is partway through her first semester, Herguth reports that things are going well both in the classroom and with her experiences on campus.

“I’m in professor (Bonnie) Wentzel's public speaking class. I really wanted to get more experience in this area and this class is really helping me to improve myself,” she said. “My biology and chemistry classes are really interesting. I love the labs and I just love science in general.”

Herguth also has praise for her Barrett classes. “The Human Event is probably one of the best and most thought-provoking classes I’ve ever taken,” she said. “The honors freshman seminar, Becoming a Community of Scholars, is a very engaging experience. I’ve learned to think about things in a philosophical way (that) I would not have before.” Herguth’s freshman seminar is being taught by Ramsey Eric Ramsey, associate dean for Barrett on the West campus.

Herguth also has wasted no time getting involved with campus organizations. “There are so many clubs here that I wish I could join everything,” she said. “I joined Barrett Artists and Musicians, the chess club my friend Carissa is organizing, the Otaku club and the Cosplay club, which is setting up a convention that I’m really excited about. I also want to join the Conservation Chemistry club. I'm so happy I could find activities that reflect my interests and find others who have those interests, too.”

The West campus has proven to be an ideal setting, Herguth said. “The campus is so beautiful. I love the fact that it’s just the way it is, not huge enough to get lost, but not so small that you never meet anyone new.”

Herguth started meeting people at the West campus during her visit in her senior year of high school. Among them was Todd Sandrin, associate director of New College’s School of Mathematical and Natural Sciences and associate vice provost at the campus. Sandrin says Herguth will be entering a growing field when she graduates.

“A recent U.S. Bureau of Labor Statistics report predicted that jobs for forensic scientists will grow significantly faster than average in the coming years,” Sandrin said. “Forensics graduates are prepared for careers in forensics laboratories and in the research and development of new technologies in the field. Graduates of the program also will be well-prepared to pursue advanced degrees in the sciences or law.”

In addition to its emphasis on biology, chemistry and the analysis of evidence, the forensics curriculum focuses on oral communication skills, which are important in preparing graduates for the multifaceted and multidisciplinary aspects of careers in forensics, such as providing articulate and compelling expert testimony in criminal trials. The public speaking course Herguth is now taking is part of the degree curriculum.

The opportunity to develop and use multiple talents may be part of what attracted Herguth to forensics a few years ago when she happened upon the video game called Apollo Justice: Ace Attorney. “I soon came across a character named Ema Skye, who was so enthusiastic about and in love with forensics. She made me interested in the science behind solving crimes and I’ve been reading everything I can about it since then,” she said.

Herguth’s natural curiosity and desire to learn and explore make her a perfect fit for ASU, said Joe Swingle, director of New College and West campus admissions for the university’s Undergraduate Admissions office, who also met with Herguth during her campus visit.

“The value ASU places on entrepreneurship encourages our faculty and students to pursue innovative and creative ideas, which is the reason we are on the cutting edge in so many disciplines,” Swingle said. “This benefits students across all majors by giving them unique research opportunities in areas that are confronting some of the major challenges facing our world today.”

Added Sandrin, “Arielle is a talented, hard-working individual, and her talents and work ethic will take her far. We’re extremely pleased that she has chosen ASU, New College and Barrett to assist in her next phase of personal and professional development.”

ASU professor Hao Yan has been appointed as leader of a new effort to advance 21st-century discoveries that will have a major impact on the fields of biomedicine, energy research and bioelectronics.

ASU professor Hao Yan has been appointed as leader of a new effort to advance 21st century discoveries that will have a major impact on the fields of biomedicine, energy research and bioelectronics, called the Center for Molecular Design and Biomimicry.

“With the formation of the first ASU center entirely devoted to biomimicry, Hao Yan’s considerable leadership and expertise will serve as a major catalyst in developing a world-class research initiative that seeks to better understand nature’s design rules and reimagine, reinterpret and rebuild them in a countless number of ingenious ways in order to make our lives better,” said ASU President Michael Crow. 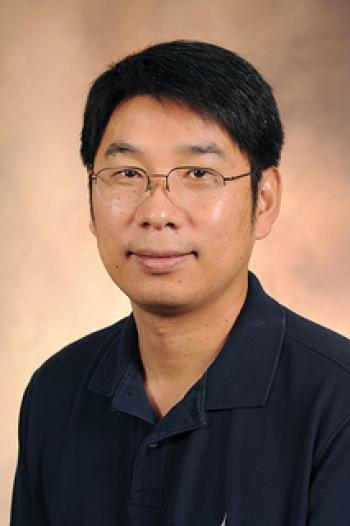 “Starting as an ASU assistant professor just a decade ago, Hao Yan has had a meteoric rise through the academic ranks of ASU and thrived in the multi-disciplinary atmosphere of the Biodesign Institute,” said Raymond DuBois,  executive director of the Biodesign Institute. “With his impressive body of work, extraordinary talents of the research team he has assembled and the breakneck speed of their discoveries and achievements, he has had a profound impact on nanotechnology. Now, with the expansion of Hao Yan’s research in the establishment of this new center, and the recruitment of more top-notch talent, we will significantly broaden the scope and influence of his research.”

The new center becomes the 12th research center at ASU’s Biodesign Institute and is emblematic of the institute’s mission of scientists tackling complex societal issues by creating “bio-inspired” solutions to some of the world’s most urgent challenges in the areas of biomedicine and health outcomes, sustainability and national security.

“Now, with this center, there is a golden opportunity to expand ASU’s research in molecular design and biomimicry,” said Yan, who holds the inaugural Milton Glick Distinguished Professor of Chemistry and Biochemistry. “I am thankful to President Crow and ASU’s leadership for the opportunity to implement the vision of this new center and develop a world-class biomimicry effort to benefit ASU, the state and ultimately society.”

In nature’s role as Earth’s master architect, an almost 4 billion-year trial-and-error process has refined all of our planet’s living organisms, functions and materials. Scientists have long looked at nature as inspiration for answers to both complex and simple problems throughout our existence, from Leonardo Da Vinci creating elaborate sketches of flying machines by studying birds in flight to more recent attempts to understand the properties of spiders’ silk to build materials as strong as Kevlar. The field of biomimicry has given rise to new technologies created from biologically-inspired engineering, ranging from nano-scale to macro-scale outcomes.

To date, Yan’s research approach has focused on using DNA, an essential building block of all life forms, as the architectural underpinnings of a biomimicry approach to advanced nanotechnology with the ultimate goal of building a suite of dynamic nanoscale devices.

Yan is a well-recognized leader in his field, known as structural DNA nanotechnology, or DNA origami, that can fold and self-assemble DNA into a broad range of technological applications important for human health and bio-electronic sensing devices. In addition to his research team’s scientific achievements that have graced the covers of leading research journals such as Science and Nature, honors for Yan include a $6.5 million Department of Defense MURI award; an Alfred P. Sloan Research Fellowship (2008-10); National Science Foundation CAREER Award (2006-2011); Air Force Office of Scientific Research Young Investigator Award (2007-2010); and the Arizona Technology Enterprise Innovator of Tomorrow Award (2006).

Yan’s inspiration behind the new biomimicry center is to move beyond DNA nanotechnology and develop innovative technologies that may spark a ‘bottom up’ nanotechnology industry to develop novel solutions in medicine, energy and electronics. Such a field could spawn the growth of entirely new 21st century industries.

“I have always been very interested in designer architecture,” said Yan. “Every architect needs a set of design rules. In nanotechnology, we need a set of rules that will allow anyone in the field to be able to design an engineered biochemical pathway using a bottom-up approach, where we use the biochemical building blocks of a cell as our building blocks to make new discoveries.”

From bio-inspiration to innovation

Yan’s research team has built a variety of 2-D and 3-D structures at a scale 1,000 times smaller than a human hair, and now, he wants to push their efforts to build even smaller, and design at the scale of individual atoms, molecules and chemical bonds, which he has dubbed “Angstrom level control.”

Support for the establishment of the center includes federal funding and funds from ASU’s Office of Knowledge Enterprise Development. As the center grows and matures, large collaborative grants with other universities and industrial partnerships will serve to accelerate discovery.

Major Center for Molecular Design and Biomimicry research thrusts include developing faculty labs devoted to all aspects of the biomimetic innovation cycle, including:

• Programming – thinking of biomimetic systems like the transistors, circuits and logic found in microprocessors and computer hardware

“Our initiative will ultimately distinguish itself significantly from the majority of other biomimicry efforts around the world, where scientists develop biomimetic materials by identifying, adapting and modifying existing biological components for subsequent integration with man-made materials,” said Yan. “Our vision is to design intelligent materials and processes, and a suite of smart molecules that can self-assemble into materials or function in biological networks to deliver drugs, control chemical reactions or build molecular scale electronics, as well as for tissue engineering, biosensors and renewable fuels."