Arizona State University junior James Qian is the winner of the Impromptu Speaking competition at the 2015 American Forensics Association’s National Individual Events Tournament – a feat never before accomplished by any ASU student.

The tournament was hosted April 3-7 at Lewis & Clark College in Portland, Oregon. The American Forensics Association is the largest organization for college speech and debate in the country. 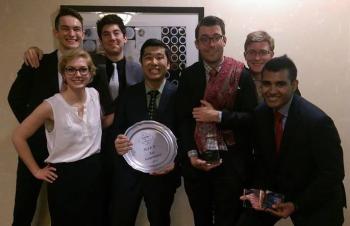 The tournament hosted over 75 schools for competition, with more than 800 students in 11 public speaking events.

The events are divided into three categories:

“I’m not a bit surprised that Jimmy is our newest national champion,” said Adam Symonds, ASU Speech and Debate Team director. “After finishing 5th as a frosh in Extemporaneous Speaking – the other limited preparation event at the NIET (National Individual Events Tournament) – I thought it was only a matter of time. He has an obvious natural speaking talent which he blends with a very strong work ethic. It’s a perfect recipe to win a national championship.”

Qian’s win in Impromptu Speaking means the ASU Forensics (speech) team has now won the national championship in each of the 11 events offered at the National Individual Events Tournament. Since the inception of the tournament in 1978, ASU Forensics competitors had claimed 1st place in every event except for Impromptu. The most recent title was earned by Eddie Gamboa in Prose Interpretation at the 2010 tournament.

“It still hasn’t really sunk in ... I feel grateful, and also incredibly happy," said Qian, a computer information systems major in the W. P. Carey School of Business. "I was just proud to give a speech that will be remembered.”

His victory adds Qian to a long list of ASU champions, as it is the 19th individual events title by ASU Forensics during the lifespan of the tournament.

Led by Qian’s Impromptu championship, the team – comprised of juniors Frankie Marchi and Paxton Attridge, sophomores Kohinoor Gill and Benjamin Steele, and firs-year student Abigail Toye – placed 14th in overall sweepstakes at this year’s tournament. As a group, they competed in nearly 30 events, collectively performing over 150 times over three days. Additional standout performances came from Gill, who placed as a quarterfinalist in both Impromptu Speaking and After Dinner Speaking.

“The NIET is a grueling competition, where the students are up at 5 a.m. and won’t return to the hotel until 10 p.m. or later. Finishing 14th is a testament not only to their abilities, but to their determination and strength of will throughout the weekend,” Symonds said.

The team’s 14th place finish marks a move up in the standings from its 16th place award at the 2014 tournament. Sweepstakes points are tallied like the gymnastics competition at the Olympics: each student individually performs in several of the categories, and the points from those performances are totaled to rank the overall team performance.

“We were ecstatic last year when a squad of only six competitors from ASU Forensics tallied a 16th place finish. To see the team improve on that finish with six students again this year – it’s just remarkable,” Symonds said. “Schools are able to bring as many students as they want until they reach the cap of 66 total events entered. Our students performed so well with less than 30 events that they were easily one of the most productive squads on a per-student basis. The excellence in their preparation carried one and all to a wonderful achievement.”

“On the heels of these accomplishments at the NIET, I think the students are fired up for this year’s NFA tournament," Symonds said. "The Division II National Championship was a crowning achievement last year, and our students have demonstrated they are more than capable of repeating that feat."

Three professors at Arizona State University have been selected to receive the 2014-2015 Centennial Professorship Award.

Three professors at Arizona State University have been selected to receive the 2014-2015 Centennial Professorship Award.

Created by the Associated Students of ASU, the award is given out to reward community service and to compensate, recognize and encourage excellent teaching and leadership in and out of the classroom.

Joseph Blattman, from the School of Life Sciences, was selected for his dedication to the community and teaching methods that distill the biology of the immune system into an engaging and comprehensible format for students.

Sara Brownell, also from the School of Life Sciences, was selected for her continued commitment to employing active, translatable student-centered teaching approaches.

Jacquelyn Scott Lynch, from Barrett, the Honors College, was selected for her motivated contribution to and dedication in molding scholar citizens through collaborative, interdisciplinary learning.

Professors Panagiotis Artemiadis, in the Ira A. Fulton Schools of Engineering and Patricia Murphy, in the College of Letters and Sciences, were selected as honorable mentions.

The Associated Students of ASU will officially announce the 2014-2015 Centennial Professorship Awards April 14 at the ASU Art Museum on the Tempe campus. The event begins at 11:30 a.m. and will include a short program and lunch. Attendees must RSVP by April 10.