He is one of 15 professors from 13 universities whose appointments were announced by the Maryland-based biomedical research institute on June 30. The appointment includes a five-year, $1 million grant to support Anbar’s research and educational activities. 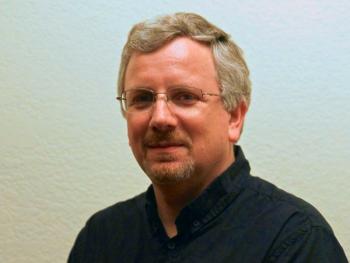 Since the inception of the institute's professor program in 2002, and including the new group of 2014 professors, only 55 scientists have been appointed Howard Hughes Medical Institute professors. These professors are accomplished research scientists who are working to change undergraduate science education in the United States.

“Exceptional teachers have a lasting impact on students,” said Robert Tjian, Howard Hughes Medical Institute president. “These scientists are at the top of their respective fields, and they bring the same creativity and rigor to science education that they bring to their research.”

Anbar, a professor in ASU’s School of Earth and Space Exploration and the Department of Chemistry and Biochemistry in the College of Liberal Art and Sciences, as well as a Distinguished Sustainability Scientist in the Global Institute of Sustainability, was named an ASU President’s Professor in 2013 in recognition of his pioneering online education efforts. He is deeply involved in using the medium to its fullest to help educate and encourage a generation that has grown up with the Internet.

A leading geoscientist with more than 100 peer-reviewed papers to his name, Anbar’s research focuses on Earth’s past and future as a habitable planet. This expertise feeds directly into his teaching in the highly successful class "Habitable Worlds," developed through ASU Online. In "Habitable Worlds," Anbar and course designer Lev Horodyskyj combine the power of the Internet, game-inspired elements and the sensibilities of a tech-savvy generation to teach what makes planets habitable and engage students in a simulated hunt for other habitable worlds in the cosmos. This innovative online course kindles student interest and learning. Beginning in fall 2014, it will be available outside of ASU as "HabWorlds Beyond," via a partnership with education technology company Smart Sparrow. "Habitable Worlds" has been taken by more than 1,500 ASU students and consistently receives outstanding student reviews.

Anbar helped lead a multi-institutional team that developed a number of such virtual field trips for use in "Habitable Worlds" and elsewhere, supported by the NASA Astrobiology Institute and the National Science Foundation. Now, working with ASU education technologist and doctoral student Geoffrey Bruce, ASU professor and geoscience education specialist Steven Semken and partners at other institutions, Anbar will build virtual field trips (VFTs) covering the sweep of Earth's history. He and his team will take students to some of the most important places on Earth to explore how the planet came to be what it is today.

“The goal is to develop powerful and engaging new tools to teach about Earth’s evolution,” explains Anbar. “In the near term, we will create VFT-based lessons that can be incorporated into existing introductory geoscience courses. Right away, that can impact the roughly 2,000 majors and non-majors who take such courses each year at ASU, as well as thousands of students elsewhere. In the long run, we aim to create a fully online course like 'Habitable Worlds' – I’m calling it 'Evolving World' for now – that covers the content of one of the most important introductory geoscience courses, historical geology.”

Anbar’s plan could re-invigorate instruction in historical geology, which is taught in nearly every geoscience program. In addition to being fundamental to the field of geology, it provides vital context for the search for life beyond Earth and for the changes that humans are causing to the planet. However, historical geology is best taught through field experiences, which are logistically challenging at large universities. Even when they are possible, it is impossible to expose students to all the most scientifically important sites because they are scattered around the globe. While virtual field trips cannot rival physical field trips, they are a big advance over teaching this material only through lectures.

“Most science classes teach science as facts and answers,” says Anbar. “With VFTs, as with Habitable Worlds, we are trying to teach that science is really a process – a process of exploration that helps us first organize our ignorance about questions to which we don’t have answers, and then helps us narrow the uncertainties so that we can replace ignorance with understanding.”

Faculty, staff service made simple with My ASU

ASU has enhanced support tools for faculty and staff by updating the Service tab in My ASU.

Faculty, staff service made simple with My ASU

ASU has enhanced support tools for faculty and staff by updating the Service tab in My ASU.

As an ASU faculty member, academic professional or staff employee, you now will have easier access to IT and HR help directly through your My ASU account. You can explore each service area by viewing the IT Services or HR Services infographics.

With the new and improved My ASU Service tab, you can:

• submit a request for IT or HR assistance, service or technology items
• track the status of your pending IT or HR service requests
• report an IT outage or technical issue
• search for solutions to IT and HR questions
• get immediate IT help using live chat

Call 855-ASU-5080 to be immediately connected with the ASU IT and HR support team. A team member will be able to assist you with the following and more:

IT and HR Services feedback is welcome by using the “Feedback” button in My ASU, which is located at the lower right-hand side of the page.