Urban anthropologist Katrina Johnston-Zimmerman is passionate about people and public spaces – and bringing them together.

She is at the forefront of the placemaking movement, which positions public spaces at the center of communities and puts the key to shaping those spaces in the hands of local residents. 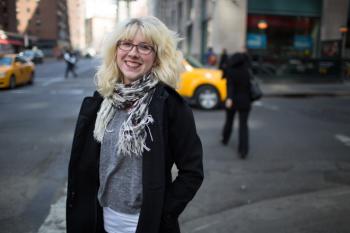 The Arizona State University alumna graduated with a bachelor’s degree in anthropology before moving to Portland State University for her master’s degree in urban studies. She has deftly combined her interests into a career as the research and communications associate for the nonprofit Project for Public Spaces in New York City.

For this self-proclaimed idealist, it is not only a great job, but also a chance to change the world for the better.

“I’m a part of a very dedicated group of people who have been propelling placemaking into mainstream society,” Johnston-Zimmerman says. “As any anthropologist knows, it takes time to change culture, and I truly believe we are finally at the forefront of this paradigm shift in urbanism. Where once we thought nothing of the people that places were designed for, it is becoming more normalized now to focus on the users of the spaces in our urban environments.”

Because of her experience with ethnographic observation and survey, Johnston-Zimmerman knows from what people have told and shown her that for public places to work, they need to fill more than just basic human needs. For many, feeling a sense of community is as important as having air to breathe, and for the vast majority, function must trump form.

Despite her penchant for the field, urban anthropology seems like a strange choice for someone who grew up in rural areas climbing trees and playing in mud, and who, even upon entering college, was set on a career in fine art.

Johnston-Zimmerman’s first time living in a city was when she moved to Phoenix to attend ASU.

Arriving on the scene without a driver’s license made her realize the need for cities planned to meet residents’ needs. Her first-hand experience, combined with the urban design literature she reviewed at ASU for a research project, set her on the course for urban anthropology.

While the field is one of her loves, she also considers it a necessity.

“If over half of the world’s population is living in cities for the first time in the history of humankind, we should all be focusing on it to some extent as anthropologists and human beings,” she says.

Equity is the motivation. She says that means an emphasis on livability for all inhabitants, regardless of whether or not they can afford to live in the “best” neighborhoods.

“In some cases, that can be achieved by top-down overarching improvements that impact all users – a sewer system in an informal settlement, for example,” she explains. “But many changes can and should be in the hands of the citizens themselves in order to strike a balance and improve the quality of lives of billions of people worldwide. I believe that applying anthropology is a helpful piece to the human happiness puzzle that impacts us all. Personally, I have applied this through grassroots interventions as well as research on urban environments.”

After finishing her graduate program, Johnston-Zimmerman teamed with a group of like-minded urbanists to found Better Block PDX and spearheaded a PARK(ing) Day event in downtown Portland. PARK(ing) day is an annual, international affair wherein people transform parking spaces into parks for one day to showcase the need for more open space in cities.

For Johnston-Zimmerman, what began as plans to temporarily repurpose one or two parking spaces led to the creation of a mini-park that spanned an entire block. Pingpong tables, hammocks, movable tables and chairs, plants and stand umbrellas were set up curbside to encourage people to connect and take some time to enjoy the urban outdoors. The event was a success, drawing scores of people who benefited from the social oasis and made their desires for similar, lasting public spaces known.

To keep the momentum going, Johnston-Zimmerman and her Better Block PDX colleagues collaborated with Coady | Bowman to create a presentation about the event and presented it to the head of the Portland Bureau of Transportation. As a result, a Portland branch of the Better Block project was established to help improve public spaces in the city.

Even as an undergrad in the School of Human Evolution and Social Change in the College of Liberal Arts and Sciences, Johnston-Zimmerman was building a firm research foundation. She conducted an independent project that provided firsthand knowledge of survey research and co-authored two articles published in professional journals. During that same period, she participated in an archaeological dig in Cyprus and hostel-hopped across Scandinavia.

“The professors I had at ASU not only encouraged me, but found opportunities for me to take part in, whether it was following up a field school or hiring me as a research associate after graduation,” she says. “When it came time to apply to grad school, they were ready with recommendations and kept in touch to see how I was.”

As a result of her preparation, Johnston-Zimmerman has landed what she calls her dream job in a dream setting.

“I think New York City is like the sum of humanity in one place, playing out before our eyes every day. It is truly the ultimate urban laboratory with its perfect combination of density and diversity,” she notes. “I also really appreciate the delicious pastries and incredible variety of ethnic food, as well as being a part of the majority who live car-free.”

She has some words of advice for students considering entering the field of anthropology.

“Firstly – do it!” she says. “But also, know what you want to do with it. Do your research into job prospects. Focusing on one area of anthropology that resonates with the workplace – such as urban issues, community development or social research – will help you fit in with already existing organizations if you don’t want to go beyond a bachelor’s degree. Then again, if teaching is your passion and you want to dig in the summer and be a professor, set your path in motion for a PhD!”

A new collaborative program between Sun Devil Athletics and Arizona State University's College of Public Programs offers ASU's high-achieving student-athletes with a passion for public service the opportunity to build upon those strengths.

Whether they excel in individual or team sports, athletes tend to be natural leaders and community builders. A new collaborative program between Sun Devil Athletics and Arizona State University’s College of Public Programs offers ASU’s high-achieving student-athletes with a passion for public service the opportunity to build upon those strengths.

Tip of the Fork acknowledges student-athletes who have demonstrated success both on and off the field. The first cohort was recently selected to participate in the program that will take them through two years of classes, culminating in a community service project. Students in the program graduate with a certificate in leadership and service in addition to their degree. 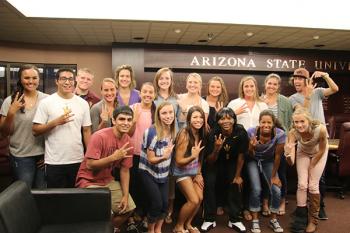 The program brings together students across a wide range of majors, and provides an opportunity for student-athletes to work closely with other students on campus.

“There is a natural correlation between participation in athletics and leadership. The goal of the Tip of the Fork program is to cultivate our best and brightest into agents of impact among their teams, campus and the local and global community,” says Jean Boyd, senior associate athletic director, Sun Devil Athletics.

“This is an opportunity for students who have a passion for public service to put their ideas and innovation to work today to make meaningful, positive change in our community,” says Jonathan Koppell, dean of the College of Public Programs.

“I applied because I can help people and actually make a big difference within this community,” says Elisha Davis. “Additionally, I think this program will help make me a better person because I will be more hands-on in the community and I will see how grateful and appreciative I should really be due to me seeing others' unfortunate circumstances.” Davis is on the women’s basketball team and pursuing a double major in communication and social work.

Matthew Schneider is on the men’s wrestling team and pursuing a degree in aerospace engineering. He says, “I’m passionate about making a difference in the world and leaving my own positive mark on society. My goal is to make sure I improve our way of living before I die. This program gives me an excellent opportunity to take my first step towards my ultimate goal.”

During their studies, students will fulfill over 100 hours of community service. The cohort will design and implement a local leadership initiative.

Students in the Tip of the Fork program will ultimately serve as mentors for future cohorts. Learn more at thesundevils.com.