Since graduating from Arizona State University in 2007 with a doctorate in anthropology, Christine Lee has made a name for herself in the field of bioarchaeology.

Earlier this year, she was selected as a 2011 TEDGlobal Fellow for her work “to uncover and better understand Mongolia’s and China’s ancient civilizations.” 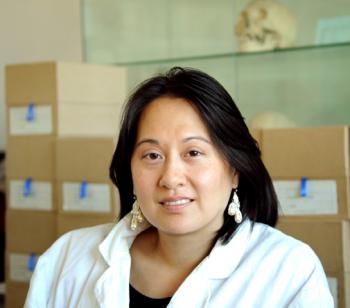 The TED Fellows program brings together extraordinarily high-achieving young professionals in a forum that promotes insight and inspiration. In July, Lee traveled to Edinburgh for the TEDGlobal conference, where big ideas from some of today’s brightest minds – like Lee’s – were presented. “Meeting and interacting with such brilliant and innovative people was really eye-opening for me,” she enthused. “I was blown away by all these people who are working to make the world a better place to live, one person, one idea, at a time.”

Lee, who was named a National Geographic Emerging Explorer in 2010, has also been tapped for a post-doctoral position at the University of Cambridge beginning next year. She will concentrate on lab work to detect parasitical infections and paleopathology. “The British excel in ancient disease and trauma,” she said, noting a link between her current and anticipated work. “I am hoping this will give me new insights into the things I have been recording in China.”

Her latest project is through the Chinese Academy of Sciences’ Institute of Vertebrate Paleontology and Paleoanthropology. She is investigating the Mogou burial grounds of the Qijia culture in northwestern China’s Gansu Province. The collection of more than 1,000 tombs housing 4,000+ individual remains is the largest and earliest cemetery excavated in China to date. The number of people buried there indicates a vast city around 1800 BC. The site pre-dates the Silk Road, yet evidence is already in hand showing that people in the cemetery originated from north, east and west of that location.

Lee, who studied bioarchaeology and physical anthropology at ASU’s School of Human Evolution and Social Change in the College of Liberal Arts and Sciences, is looking for evidence of infectious diseases at the site and whether the pathogens originated in China or elsewhere. “I am very excited to see what was going on here, as it was outside of the Chinese Central Plains sphere,” she said, referring to the area along the lower Yellow River commonly referred to as the cradle of Chinese civilization.

Recently, Lee wrapped work on a project analyzing the relics of soldiers from a 2,000-year-old site in the Qinghai Province. “I found that, compared to other sites I have analyzed in China and Mongolia, these people had a hard life,” she related. “They did hard labor from an early age and had severe arthritis in later life. They also suffered from trauma consistent with patrolling the frontier against the Chinese.” In addition, Lee discovered evidence of leprosy and tuberculosis at the site, indicating that the people here were interacting on a regular basis with individuals outside their community.

Over the last seven years, Lee has come to know China and Mongolia in a unique way. Her favorite method of exploration has been road trips. She shared, “I think it’s a great way to discover a country and its people. You also really build a relationship with your fellow travelers, cope with mishaps and enjoy how differently everyone sees the world around them.” Lee covered over 2,000 miles of central and western Mongolia in two weeks and also ventured through the Tibetan region of Sichuan Province and to the Mogou site.

Lee has spent the recent past making do without her favorite aspects of Southwestern life – the desert, Native American culture, good Mexican food and convenient shopping. Now, as she readies herself for Cambridge, she is again preparing to part with a land and a way of living to which she has become accustomed. She’s especially dreading the loss of wonderful regional fare like spicy noodles and is photographing and trying to recreate her favorite dishes so she can carry that taste of Asia with her.

Eventually, Lee would like to establish a foundation that encourages dialogue and the exchange of ideas between American and Chinese scholars and students. “I think there is still a lot of work to be done to solidify collaborative efforts and benefit both sides,” she explained. “Both cultures are so different that I think there needs to be institutional support to teach each side how to communicate and understand the other effectively.”

Also on Lee’s horizon: She plans to one day return to the U.S. and resume her research in China. Additionally, she hopes to write a book based on her multi-cultural and -continental experiences.

The deadline for submitting seed grant applications to the Institute for Humanities Research is Oct. 24.

The Seed Grant program, offered by the Institute for Humanities Research, provides support for projects that advance the transdisciplinary, collaborative, and issue-focused mission of the Institute and are sufficiently developed to be competitive for national grants.

Seed grant funds are available for up to $12,000 for collaborative teams or $7,500 for individual researchers, and may be requested for the purpose of conducting research and developing proposals for submission to external funding agencies.

It is expected that within a year of support for planning and research, faculty will enhance the competitive nature of their grant proposals.

The Institute for Humanities Research in ASU’s College of Liberal Arts and Sciences was established in 2005. It has taken the lead in promoting excellence and innovation in humanities scholarship by contributing to scholarly research that addresses socially significant issues and engaging the community. More information is available at http://ihr.asu.edu or 480-965-3000.