While many are familiar with the ASU Academic Bowl, the annual quiz show competition among Arizona State University's various colleges, there are few who know about the ASU Quizbowl Club – and that's a shame, says ASU student Kenneth Lan.

Lan is something of an Academic Bowl legend, having competed in four of the previous five tournaments to ever take place at ASU. And twice he led his College of Liberal Arts and Sciences team to victory. 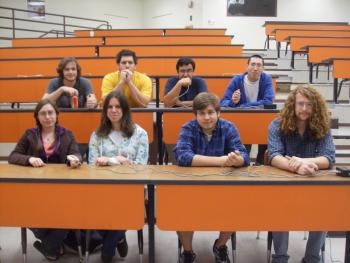 But now as a graduate student in ASU's Ira A. Fulton Schools of Engineering, where he is working toward a master's degree in biomedical engineering, Lan is officially out of the Academic Bowl game – as the tournament is for undergraduate students only. However, that doesn't seem to phase him much.

The ASU Quizbowl Club which he started in 2008 and managed until last spring – and still participates in – is for students of all academic levels and ages, and it makes the Academic Bowl look like a very small piece of the pie. In just three years, the club has not only made it to national competitions, but it has placed in them – a dramatic evolution thanks to the leadership of Lan, who was the club's main organizer and coach.

"I'd like to be known as the person who led ASU – not CLAS [College of Liberal Arts and Sciences], not Engineering, but all of ASU – to back-to-back Top 25 national finishes and upset wins over UCLA, Stanford and Columbia," Lan says.

"Quizbowl is a very big activity," Lan says. The club practices and competes year-round, traveling all over the United States to face off against competing universities. There is no monetary reward; Lan says that camaraderie, teamwork and the glorification of academic knowledge are the key motivators for the club's members.

Members of the club meet for two to three hours a couple nights each week to practice. According to Lan, those members who want to represent ASU at national competitions also specialize in specific subjects and will study on their own time. However, many members are just part of the club for fun.

"Graduate students do tend to have less time and go to fewer tournaments, but that’s entirely voluntary," he adds.
Now as a graduate student himself, Lan is not leading the team anymore, but he still participates and helps spread the word about opportunities or academic competition at ASU and in the community.

"When I was in high school, Quizbowl didn’t even exist in the whole state of Arizona," Lan says. Now, the Quizbowl Club has become the center of a new Arizona high school competition that has grown from 10 teams and five schools to 17 teams and 8 schools in just one year. "Hopefully one day all the high schools in the state will have students involved."

Lan says the club's work is making a difference in the lives of these students.

"We have been hosting high school tournaments regularly, which gives these high school students a chance to experience being rewarded for academic knowledge and gives them one more reason to study for more than just a grade in their classes," Lan says. "If you ever moderate at a tournament, you can see the spark in these kids’ eyes when they realize they know an answer.

"I’ve personally seen some of these high school kids improve from one tournament to the next. New teams struggle at first and then find their way."

As for the future of the ASU Quizbowl Club, Lan says this year will be centered around rebuilding due to changes in leadership and members leaving. One thing that won't change is Lan's commitment to academic competition.

"I think every university should have such opportunities available," Lan says. "Academic competition is certainly a lot closer to the very point of a university’s existence – the discovery and transmission of knowledge."

For more information on the ASU Quizbowl Club, contact the club officers at asuquizbowl@gmail.com.

Arizona State University's Cheryl Nickerson has been selected as one of four finalists for the Arizona BioIndustry Association's Award for Research Excellence.

Arizona State University’s Cheryl Nickerson has been selected as one of four finalists for the Arizona BioIndustry Association’s Award for Research Excellence. The 2011 recipient will be recognized at an awards dinner at the Sheraton Wild Horse Pass in Chandler, Ariz., on Oct. 13.

Prompting her nomination was Nickerson’s pioneering research into the responses of cells to the unique microgravity environment of spaceflight. She is internationally recognized for her use of the microgravity environment as an innovative biomedical research platform to provide new insights into the host-pathogen interaction that leads to infectious disease. Her findings are leading to better ways to protect astronauts during manned missions and hold exciting potential for development of new vaccines and therapeutics to prevent infectious diseases on Earth. 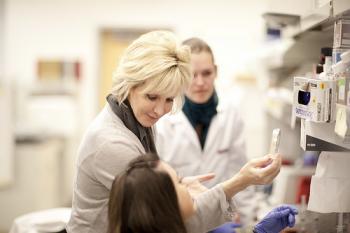 “There are conditions that are encountered by pathogens during the infection process in the human body that are relevant to conditions that these same organisms experience when cultured in spaceflight. By studying the effect of spaceflight on the disease-causing potential of major pathogens like salmonella, we can provide insight into infectious disease mechanisms that cannot be attained using traditional experimental approaches on Earth, where gravity can mask key cellular responses,” says Nickerson, a professor in the School of Life Sciences, in the College of Liberal Arts and Sciences, and a researcher in ASU’s Biodesign Institute Center for Infectious Diseases and Vaccinology.

Landmark spaceflight experiments aboard the NASA Space Shuttle and International Space Station have placed Nickerson’s work at the forefront of the field of cellular biomechanics, which is the study of physical forces on living cells and how this response is related to disease. Her multidisciplinary research focuses on microbial and human cellular responses to the physical forces of fluid shear and gravity. Minimizing these forces in microgravity creates an environment that is relevant to that encountered by pathogens during the natural infection process in the host and also for human cells during their natural development into functional tissues.

Nickerson’s approach has elucidated previously undetected cellular and molecular mechanisms of infectious disease, which were masked by the forces associated with gravity on Earth. Her groundbreaking discoveries include unique changes in the disease-causing potential of microbial pathogens and the development of advanced 3-D models of human tissues as high fidelity tools for infectious disease studies and drug and therapeutic development. These findings have resulted in a paradigm shift in how we view the infection process from the host-microbe perspective.

“It is exciting to me that our work to discover how to keep astronauts healthy during spaceflight is translating into novel ways to prevent diseases here on Earth,” Nickerson says.

Nickerson has a long and productive relationship with the U.S. space program. She has been a scientific consultant for the NASA Life Sciences Program since 1998 and was an astronaut candidate finalist in 2004. She received the Presidential Early Career Award for Scientists and Engineers in 2001 at the White House and has testified before Congress for NASA.

This summer, Nickerson was awarded NASA’s prestigious Exceptional Scientific Achievement Medal. She has trained more than 40 students, published more than 55 peer-reviewed articles and book chapters, holds six patents, and has obtained millions of dollars in research grants. She led an unprecedented effort to obtain a Space Act Agreement between NASA and ASU for routine access to the ISS research platform for collaborative spaceflight biosciences/biotechnology investigations.

For more information about the awards dinner, visit www.azbioexpo.com.