From empathy to self-regulation of emotions and back again: Developmental psychologist Nancy Eisenberg retires

Nancy Eisenberg has been a trailblazer in developmental psychology for over 40 years. What began as dissertation research on political attitudes turned into a sprawling career that has addressed everything from the underpinnings of empathy and moral reasoning to factors influencing the self-regulation of emotions and behavior. Her research studies, which shaped the field of developmental psychology, have been cited more than 100,000 times by other scientists.

Eisenberg joined Arizona State University in 1976, a time when there were no other female tenure-track professors in the Department of Psychology. She was named a Regents Professor of psychology in 1991 and will retire at the end of the fall 2020 semester. 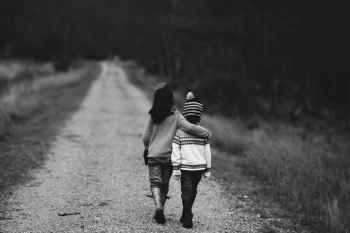 Nancy Eisenberg's four-decade career at ASU has been defined by studying empathy and self-regulation of emotions in development. Photo by Annie Spratt/Unsplash. Download Full Image

Like her study citations, her awards and accolades are numerous. Eisenberg has been recognized by the National Institute of Mental Health with a Research Scientist Development Award and two Research Scientist Awards. She also served as president of the American Psychological Society and of Division 7 of the American Psychological Association (APA). Eisenberg was the founding editor of the flagship journal of the Society of Research for Child Development, Child Development Perspectives, and worked as the editor of the APA’s most prominent journal, Psychological Bulletin.

Despite the impact her research has had on developmental psychology, Eisenberg is most proud of the relationships she formed with the students and postdoctoral scholars she mentored during her career.

“No matter how good you are, your real contribution is how you affect the next steps in science, which is the next generation,” she said. “I am most proud of my students and postdocs, and the relationships I have with them.”

One of her former postdoctoral scholars is Tracy Spinrad, a professor in the T. Denny Sanford School of Social and Family Dynamics who did her postdoctoral studies in Eisenberg’s lab. Spinrad and Eisenberg have worked together for over 20 years. Nancy Eisenberg (right), Regents Professor of Psychology, and one of her former postdocs, Tracy Spinrad, professor in the T. Denny Sanford School of Social and Family Dynamics.

“I began as a postdoctoral researcher working under her direction, and now we are colleagues who collaborate on nearly all of our research. She has impacted my thinking about child development, research, and science – but more importantly, Nancy has inspired me as a mentor and as a friend,” Spinrad said.

Eisenberg showed an early aptitude for science — she was valedictorian of her high school and won a science award — but it was an introductory developmental psychology class at the University of Michigan that sparked the lifelong interest that is the foundation of her four-decade career.

“People have always fascinated me, especially what makes them who they are,” Eisenberg said.

After graduation, she moved to the University of California, Berkeley, where she earned her doctorate studying the moral beliefs and behaviors that contribute to political attitudes.

Because she was especially interested in how humanitarian political attitudes come about, Eisenberg started studying the link between moral judgments in children and their prosocial behaviors like sharing, helping and comforting others. She found that the types of moral judgments children made about helping others also was related to their political attitudes and prosocial behaviors.

These findings led her to ask questions about the role of empathy in prosocial behavior and moral judgments. Because empathy – the ability to understand and share others’ emotions – can result in feeling intense emotions that are vicariously induced, Eisenberg studied how the ability to regulate emotions contributed to social and moral behaviors in children.

Researchers studying emotion regulation and empathy often measure the balance of sympathetic and distressed feelings as a way to assess whether people are motivated to help others or to reduce their own discomfort. Most of the findings about emotion regulation came from asking adults about their feelings, but such self-report measures do not always work well in children. So, Eisenberg created objective ways to measure sympathy and distress in young children by tracking facial expressions and physiological measures such as heart rate and skin conductance.

This work on emotion regulation soon led Eisenberg to question how individual children varied in their ability to self-regulate and how that affected their development and outcomes like success in school. Her research affirmed the impact environmental factors like parenting style can have on self-regulation abilities in children.

Lately, Eisenberg has used the study of individual differences in empathy and emotion regulation to return to the research question that started it all: How do people form beliefs that shape the current political environment?

“There is a big distinction between feeling empathy for people who you know, like and are connected to versus for people who are different,” she said.

Eisenberg, in collaboration with Tracy Spinrad and graduate students, has been working on understanding how empathy develops in the context of race. One study showed that implicit biases of parents impact empathetic responses in very young children but have less of an effect as the children grow up.

Another study measured brain responses associated with empathy in white children as they watched videos depicting social injustice scenarios involving both white and Black children. Children had neural activity in response to seeing other children bullied or teased, but this brain activity did not differ based on the race of the victim.

“These studies are an opportunity to understand ways in which children may become ‘anti-racist’ – how children can feel sympathy towards all people and be equitable in their helping and sharing,” Spinrad said. “We think this work has really important implications for ways to socialize and promote generosity toward humanity, and not just those who are most like you.”

Though Eisenberg is retiring from ASU, her influence will remain. She recently donated funds to the Department of Psychology to ensure it remains a center of excellence in developmental psychology. The Nancy Eisenberg Distinguished Speaker Series will foster conversation and idea exchange by hosting scholars in socialization, moral and emotional development, socio-emotional competence, altruism, empathy and gender role development and other topics related to development.

Venue to host university and community events and serve as the future home for Sun Devil men's ice hockey, wrestling and women's gymnastics ... Venue to host university and community events and serve as the future home for Sun Devil men's ice hockey, wrestling and women's gymnastics