Hao Yan, director of the Biodesign Center for Molecular Design and Biomimetics at Arizona State University has been awarded the 2020 Foresight Institute Feynman Prize.

The coveted award, named in honor of visionary physicist and Nobel laureate Richard Feynman, is given annually for outstanding contributions to nanoscience in two research categories: experimental and theoretical. 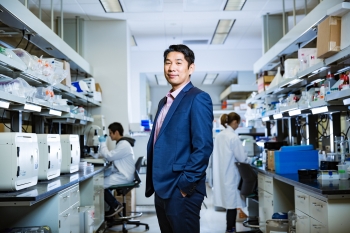 Hao Yan, director of the Biodesign Center for Molecular Design and Biomimetics at Arizona State University and professor in the School of Molecular Sciences at ASU. Download Full Image

This year’s award for experimental research recognizes Yan’s significant contributions to the field, including major advancements in the design and construction of DNA nanostructures.

The innovative techniques that have made Yan a world leader in this fast-paced arena involve the fabrication of 2- and 3D nanoarchitectures that take advantage of DNA’s properties of self-assembly, through the base-pairing of its four nucleotides.

“I’m thrilled and greatly honored to be recognized by this prestigious prize. This award is very special because my PhD adviser, Ned Seeman, who introduced me to the wonderful world of DNA nanotechnology, received this prize 25 years ago,” Yan said. “Thanks to all the lab members and collaborators I have worked with; I have had the opportunity to contribute to Feynman’s original vision, using nucleic acid molecules as building blocks to engineer programmable nanostructures. The highly interdisciplinary research environment at ASU and the Biodesign Institute helps facilitate these goals.”

Many of the nanostructures conceived in the Yan workshop involve variations of a revolutionary technique known as DNA origami, in which a predesigned nanoscale scaffold self-assembles through base pairing and is held together with a series of shorter staple strands.

Yan’s research has consistently pushed the boundaries of this method as well as devised new means of manipulating nucleic acid sequences to form virtually any shape imaginable, with precise control. The applications for these nanocreations range from tiny circuits capable of lightning calculation to storage containers for delivering smart drug molecules to protecting kidneys from acute injury.

“Since his arrival at the Biodesign Institute, Hao Yan has been a relentlessly creative force and one of the guiding lights in the rapidly advancing field of DNA nanoscience,” said Joshua LaBaer, executive director of the Biodesign Institute and director of the Virginia G. Piper Center for Personalized Diagnostics. “The discipline has wide-ranging implications for the future of computing and cryptography, nanomachinery and robotics, smart materials, nanoscale electronics and photonics, and next-generation medical advances, all of which Hao has aggressively pursued in his research.”

Indeed, Yan has created a zoo of DNA architectural forms at the scale of billionths of a meter in size. These include spheres, spirals, flasks, Möbius shapes, DNA-based computer storage and cryptography applications, autonomous DNA walkers, nanoscale tweezers, light-harvesting devices and cancer-hunting nanobots, to name a few.

Hao Yan studied chemistry and earned his BS degree at Shandong University, China, later receiving is PhD in chemistry at New York University in 2001 under Seeman, a pioneer in the field of DNA nanotechnology. There, Yan’s research focused on the design and construction of sequence-dependent DNA nanomechanical devices.

Later, Yan pursued his interests in DNA-based molecular computing and programming at Duke University, before his arrival at ASU as assistant professor in the Department of Chemistry and Biochemistry in 2004.

In 2008, he was promoted with early tenure directly to full professor and then became the inaugural Milton D. Glick Distinguished Professor in Chemistry and Biochemistry and director of the Center for Molecular Design and Biomimetics in the Biodesign Institute at ASU, where his research focuses on the use nature’s design rules as a platform to advance biomedical, energy-related, and other technological innovations, constructed with self-assembling molecules and materials.

Eyes on the prize

Richard Feynman, for whom the prize was named in 1993, had an illustrious career in physics, and was renowned for his unconventional thinking. Among his many scientific preoccupations was a fascination with the emergent field of nanoscience.

In 1959, for example, Feynman delivered an influential lecture to the American Physical Society titled “There’s Plenty of Room at the Bottom,” in which he laid out the prospects of engineering atomic scale structures. Again in 1984, he described the science behind nanotechnology in a lecture titled “Tiny Machines,” revealing how machines and tools could be designed and constructed, atom-by-atom.

Feynman would no doubt be delighted at the explosive growth of nanoengineering and the novel designs and diverse applications Yan and other leaders in the field have produced. The award is only the latest in a lengthy list of accolades Yan has earned, honoring his visionary insights into structural and functional phenomena at the nanoscale.

At the Biodesign Center for Molecular Design and Biomimetics, Yan and his colleagues continue to pursue a highly creative path, which often involves appropriating and refining nature’s subtle principles of molecular-scale design to produce novel forms of benefit to society.

Yan became a fellow of the American Association for the Advancement of Science in 2019. He has served as president of the International Society for Nanoscale Science, Computation and Engineering and has been a member of the Nano Research editorial board since 2014, member of Journal of Nanobiotechnology editorial board, and recently chosen to serve as associate editor for ACS Applied Biomaterials starting January 2021. He holds the inaugural Milton D. Glick Distinguished Chair of chemistry and biochemistry and received the prestigious 2013 Rozenberg Tulip Award in DNA computing. In addition to his appointment at the Biodesign Institute, Yan is a professor at ASU’s School of Molecular Sciences.

Editor's note: This story is part of a series of profiles of notable fall 2020 graduates.If you lead a virtual team, are a constituent of a virtual leader, or if you are experiencing the world of virtual work for the first time due to the pandemic, you might want to connect with ASU graduate Elizabeth Giacobbi on LinkedIn.Giacobbi, who hails from Richmond, Michigan — a small city in metro Detr...

If you lead a virtual team, are a constituent of a virtual leader, or if you are experiencing the world of virtual work for the first time due to the pandemic, you might want to connect with ASU graduate Elizabeth Giacobbi on LinkedIn. 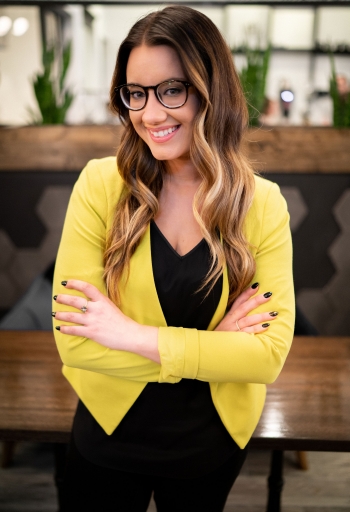 As a human resources professional eager to branch out into other realms of her company, Liz Giacobbi decided ASU's master's degree program in organizational leadership would give her the breadth she sought. Download Full Image

Giacobbi, who hails from Richmond, Michigan — a small city in metro Detroit — has just completed the Master of Science in organizational leadership online while working full time with ADP and juggling a very demanding schedule and work-travel.

A human resources professional for the last decade, she is already seeing a payoff in her career.

“I just accepted a new role at ADP as a human capital management business consultant for Global Enterprise Solutions and accepted a board position as a director of digital programming for ADP’s Diversity and Inclusion’s Generations National,” Giacobbi explained. “I was asked to be a participant in ADP’s new Front-Line Leadership Excellence Program as a beta tester with the completion of my master’s degree.”

She created a digital download encapsulating her months of research on her capstone project “Best Practices for Leaders on Effectively Managing a Team and Maximizing Engagement in a Virtual Environment” that Giacobbi will be sharing with her colleagues at ADP and has posted to her LinkedIn account.

“I would love to hear people’s thoughts,” she emphasized, “and want people to feel free to share and enjoy! I hope these tips inspire others and offer some new perspectives.”

Giacobbi’s coaching mentality is consistent with her goal to one day teach as a professor in leadership or human resources with a concentration on virtual leadership practices.

"Liz in many ways exemplifies the kind of student that the MS in OGL program serves, for it allows students to use the knowledge they have gained in their undergraduate careers and integrate it with graduate-level study and professional experience,” said Robert Kirsch, assistant professor of leadership and integrative studies and graduate program director. "Our students face this adaptive opportunity and find ways for this degree to augment their personal, professional and academic goals."

Question: What was your “aha” moment, when you realized you wanted to pursue graduate study in organizational leadership?

Answer: I spent the last 10 years of my career working in the realm of HR. Once I transitioned to ADP, I started craving other parts of the business and knew that taking a more broad approach like organizational leadership would be a better fit.

A: Even when you are in the developmental stages of your career and personal goals, you never know who you are inspiring.

A: It’s a leader in innovation and because of ASU’s flexibility with the virtual environment and serving working professionals.

A: Explore different avenues in the field you are studying. Job shadow as much as possible or conduct informal interviews. And please, please, please network!