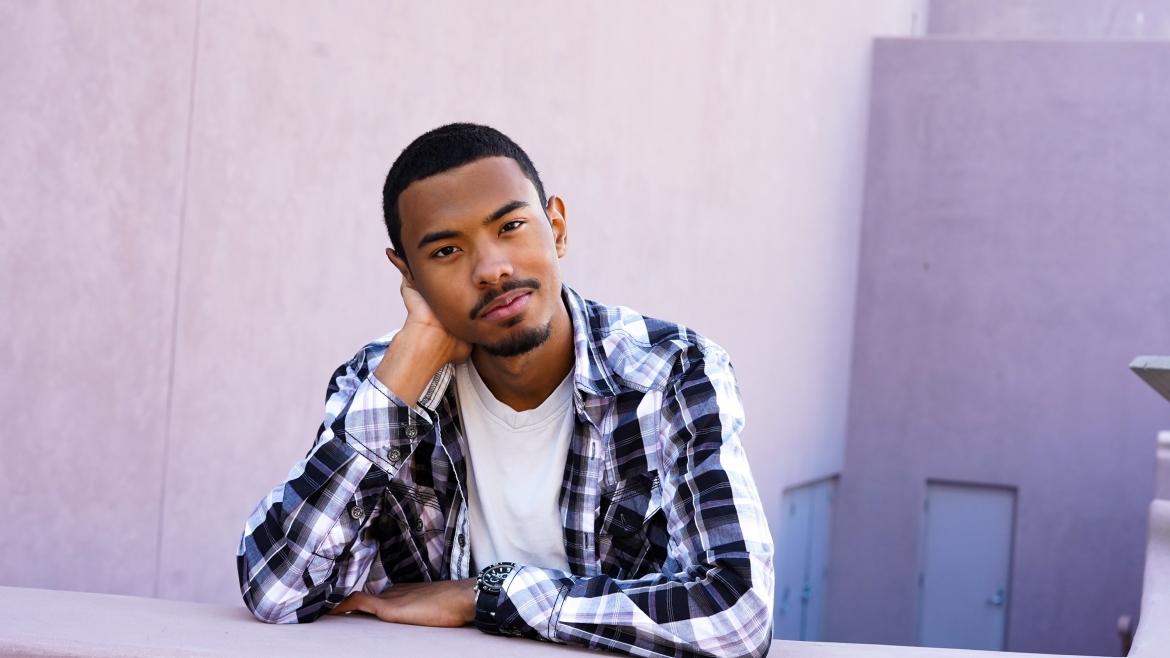 Accomplished students are frequently asked about their “aha moments,” when they discovered their path in life. But few of those students experience “aha moments” as life-altering as the one that Michael Hasan faced.

Hasan, who is graduating this month from the New American Film School at Arizona State University, faced a crisis in his freshman year and found meaning in a class that helped to change his life.

“My freshman year, in my first semester, I was suicidal,” he said.

He was taking a course called “The Filmmaker’s Voice,” and about a month after the crisis, he talked about it during class.

“I was surprised to find out that people were a lot more responsive than I expected. They said, ‘You should tell your story and you should be open about it because a lot of people are ashamed or afraid to talk about it,’” he said.

“Having that support made it easier to go through the mental health issues I was going through and that I still have,” said Hasan, who was diagnosed with depression and bipolar disorder.

“That class changed everything for me.”

Hasan, an outstanding graduate in the Herberger Institute for Design and the Arts, is graduating with a degree in film and media production with a focus on directing. Originally, he thought he would be a screenwriter.

“I didn’t want to be somebody well known. I thought I would just have my name appear in the credits,” he said.

“But now, I want you to know that ‘I did this.’ That class changed the trajectory of my life more than I expected it to,” he said.

Hasan, who's worked as a community assistant in the dorms, answered some questions from ASU Now.

Answer: Like most people, pricing was a factor for me. I started looking at film schools, and the others were really expensive. Plus, I saw this as a rising film school, and it’s really grown since I’ve been here.

A: My freshman year I wrote a script for a director who wanted to direct a movie about somebody with schizophrenia. I’ve had struggles with mental health so I used my own experience and put a lot of work into it. The director cut half the script and completely changed the direction of the film. I was upset about it and thought, "How do I prevent this from happening in the future?" And that’s when I decided I wanted to direct.

A: All of my professors made a huge difference. I’ve had some professors tell me, "This idea wouldn’t work in a professional setting because it’s not commercial." I hated hearing that at first but now I understand where they’re coming from. The entire film industry is a business.

The professor who made the biggest difference would be the one who taught “The Filmmaker’s Voice,” Tiffany Lopez. Because of that class, I took another one that she taught, “What Hamilton Means To Me,” about bridging the gap between musical theater and other arts. I got to learn a lot more about music. And she’s always been very encouraging about all of my projects.

Q: What kind of movies do you want to make?

A: I want to make dramas. Although I don’t feel like I can write or direct them, I do like romantic dramas. My capstone film, "Friendless," is about friendship. I like to analyze relationships and how friendships are affected by things people do and say. I like family movies where the bond is strengthened, like “The Incredibles.” My favorite movie is “Last Flag Flying,” which is about (the characters) rebuilding their friendship on the way to burying one of their sons. It sounds really sad but it’s heartwarming and I like that.

A: For film students, it would be, "Make sure what you’re studying is really what you want to do." They should try all the positions because they won’t know what they want until they try it. I wanted to be a screenwriter, but once I tried directing, I never looked back.

A: It’s the James Turrell work, “Skyspace: Air Apparent.” I go all the time at night. I found it my freshman year. The lights change color like the lights at the Memorial Union, and even with the lights you can still see the stars and the moon. It’s really cool.

A: Although I’m done with the film degree, I’m going to study theater for the next semester, and after that I’m going to try to move to California to work on some film sets. I’m looking at a position for a set production assistant. I still need to learn a lot more about how a feature film set works.

Q: If someone gave you $40 million to solve a problem, what would you tackle?

A: I really admire what (actor) Jaden Smith is doing in regard to water infrastructure, helping people in places like Flint, Michugan, who don’t have access to clean water. I would find ways to purify water more efficiently, campaigning to get cities and towns to repair their water facilities. It’s a serious issue.

Graduating with her master’s degree in history, student plunges into the world of research

Editor's note: This story is part of a series of profiles of notable fall 2020 graduates.Laura Harris Hales grew up on a dairy farm in Idaho with her large family who all shared a love for knowledge. Her memories consist of running barefoot in the grass, lively discussions at the dinner table and living in the country.“Think Laura Ingalls Wilder and ‘Little House on the Prairie,’” said H...

Graduating with her master’s degree in history, student plunges into the world of research

Laura Harris Hales grew up on a dairy farm in Idaho with her large family who all shared a love for knowledge. Her memories consist of running barefoot in the grass, lively discussions at the dinner table and living in the country. Laura Harris Hales is graduating with her master’s degree in history with a focus on North American history. Download Full Image

“Think Laura Ingalls Wilder and ‘Little House on the Prairie,’” said Hales. “Despite our closeness to the land, a college education was in the milk we drank. My dad worked for the U.S. Forest Service as a soil physiologist and my mother received her master’s degree in English as a nontraditional student. She was emphatic that her daughters graduate from college before pursuing any other endeavors. She did not need to coax, though, the desire to learn fills my soul and never seems to satiate.”

Hales is graduating with her master’s degree in history with a focus on North American history from the School of Historical, Philosophical and Religious Studies. She stumbled into the world of history unexpectedly about seven years ago and hasn’t turned back.

“I married an amateur historian who has written extensively on the history of religious groups that broke off of the Latter-day Saint Church after they ceased endorsing polygamy as well as on Joseph Smith’s practice of polygamy,” said Hales. “Shortly after we married, we collaborated on a condensed version of his three-volume tome on Joseph Smith’s polygamous marriages.”

This led her to opportunities for speaking engagements, memberships in historical associations and academic conference presentations. A few years later, she invited some respected Latter-day Saint history scholars to collaborate on an anthology of Mormon history topics.

From her research in polygamy, she started a podcast called LDS Perspective Podcast.

“After a presentation in Sweden on Joseph Smith’s plural wives, one of the male audience members bemoaned the fact that there was practically no material on the topic available in his country,” said Hales. “By that time, my husband and I had put together a website that provided essays in written and audio formats. He asked me if I would be able to do the same for other Mormon history topics. When I began my podcast, there was nothing in that medium for those looking for nondevotional material on Latter-day Saint history.”

“The confidence gained while working on my anthology gave me the nerve to seek my first grant to begin producing my show and to get people to listen to it. The response has been more than I ever could have imagined.”

We caught up with Hales to ask her about her time as a graduate student.

Answer: I attended an academic conference about three years ago and realized that I only had limited options in the field without a history degree. I sold the prospect quite easily to myself. Studying the past has always been an avocation. As a teenager, I would drive to the library, retrieve the bound vintage newspapers from the shelves, and gingerly turn the yellowing pages as I read about life in the 1900s. My undergraduate and first master’s degree diverted me from those inclinations, but my public history work steered me back to a familiar path.

A: It was a bit surprising to learn the extent to which scholars dispute history. It distills down to a matter of perspective. We do not always know the entire story, so ongoing research adds little brush strokes to a giant portrait of the past.

A: I had started an on-site program at a local university and the faculty and students did not quite know what to do with me as a nontraditional student. The staff at ASU never made an issue out of my age or questioned my ability to make valuable contributions to the field of history. In addition, I appreciate sharing discussions with cohorts who have a bit of professional experience.

A: Dr. Catherine O’Donnell taught me some great writing tips. First, she suggested that a light touch is best when critiquing authors’ works, such as in book reviews. Second, she reinforced the importance of simplicity in providing clarity instead of crowding sentences with clauses. Both pieces of advice have improved my writing.

A: Subscribe to Grammarly Plus. It is worth the money. It catches common grammatical errors, and it gives excellent advice on rewording awkward sentences. A history degree is essentially a writing degree with fantastic subject material.

A: In the immediate future, I plan on polishing a couple of papers for publishing in academic journals. I will also volunteer on a research project headed by several respected historians. I am hoping the internship will open some doors for me.

A: Curing COVID-19 would be fabulous.