“We congratulate Carver Bierson on this award from the American Geophysical Union,” said Meenakshi Wadhwa, director of ASU’s School of Earth and Space Exploration. “It is wonderful to see our promising early-career researchers recognized in this way by the broader scientific community.” 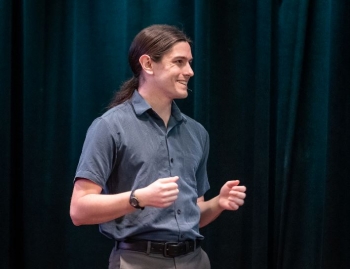 Postdoctoral research scholar Carver Bierson of the School of Earth and Space Exploration has been selected for the Study of Earth’s Deep Interior Section Award for Graduate Research from the American Geophysical Union. Download Full Image

Bierson’s research spans the solar system. He uses models to glean physical insight out of existing data in an effort to understand how worlds form, what makes them distinct, and what has guided their evolution. He is currently focused on the small worlds of the solar system, investigating how Kuiper belt objects form, why Jupiter's large satellites have large ranges in compositions, and what there is to learn about the asteroid 16 Psyche from thermal data.

"Carver is an interdisciplinary inspiration whose work is grounded in rigorous fundamentals and this award testifies to the strength of his broad-minded approach,” said Assistant Professor Joseph O’Rourke, who is Bierson’s postdoctoral adviser. “We are fortunate that he recently joined our school as he is already leading several promising projects and helping students advance their own research."

Bierson earned his bachelor’s degree in astronomy at Northern Arizona University and his PhD in planetary science at the University of California, Santa Cruz.

“Planetary science allows me to explore a wide range of questions as I try to understand the diversity of worlds in our solar system,” Bierson said. “I have studied topics ranging from atmospheric chemistry on Venus, to the formation of Jupiter's large satellites, and the thermal history of icy worlds in the outer solar system, including Pluto. I love exploring new topics and making connections between different processes and places in the solar system.”

The AGU will formally recognize this year’s award recipients during their fall meeting, which is being held online through Dec. 17.

Freshman forward Matthew Kopperud scored two of the four Sun Devil goals and is now tied for first in the country for most goals (6). Kopperud leads all freshmen in the NCAA in goals scored. ... Freshman forward Matthew Kopperud scored two of the four Sun Devil goals and is now tied for first in the country for most goals (6). Kopperud leads all freshmen in the NCAA in goals scored.