Tempe campus
Consumer spending in AZ is back to January levels; retail spending up over 17%.
But restaurant spending is down 26%; airline and entertainment sectors hard hit.
December 1, 2020

Arizona has already made good progress in recovering from the pandemic-induced economic decline, but big worries could be ahead as federal aid programs expire, according to Arizona State University’s economic outlook expert.

Lee McPheters, research professor of economics and director of the JPMorgan Chase Economic Outlook Center at ASU, spoke at the 57th annual ASU/PNC Bank Economic Forecast Luncheon, which was livestreamed by the W. P. Carey School of Business on Dec. 1. 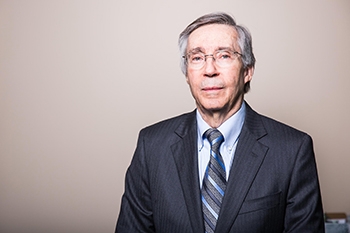 Lee McPheters is research professor of economics and director of the JPMorgan Chase Economic Outlook Center at ASU.

McPheters used the theme from the movie “The Good, The Bad and The Ugly.”

Among the “good” economic points:

Arizona has recovered 66% of the jobs that were lost to the pandemic this year, he said, and is on track to add about 40,000 more — as long there is an effective COVID-19 vaccine and the federal government passes a stimulus bill.

“That will have the effect of propelling job growth in Arizona back up to around 4%,” he said.

In addition, consumer spending in the state has recovered to January levels, and retail spending is up more than 17%.

The “bad” points include the fact that restaurant spending is down 26%, and the airline and entertainment sectors are still hard-hit.

Also, 285,000 Arizonans are still unemployed, predominantly among industries with lower wages, and the state’s unemployment compensation of $285 a week is the second-lowest in the country.

That leads to the “ugly” predictions, including a potential eviction “cliff” for 66,000 households in Arizona, while nearly 13% report having insufficient food.

In addition, two federal aid programs that help nearly 300,000 people in the state are set to expire on Dec. 26.

“There’s a serious issue as these policy programs wind down,” he said. “Consumers saved quite a bit of money over 2020, but those savings are being exhausted and food insecurity is becoming a problem.”

Three other experts joined McPheters at the event.

Bart Hobijn, professor of economics at ASU, said that in the long run, the U.S. economy faces a substantial challenge: not the pandemic, but entitlements. Bart Hobijn is an applied macroeconomist and a professor of economics at ASU.

He said that some people worry that stimulus programs will increase the debt levels, but instead, “We should worry about the long-term commitment to government-related entitlement programs. That will lead to explosive debt.”

At the current rate, Social Security is predicted to run out in 2034.

“We need a combination of reduced entitlement programs, such as raising the retirement age or having government negotiate down the prices for Medicare, and tax increases,” he said.

He noted that every piece of major legislation passed over the past few decades, including Obamacare and tax cuts in the Bush and Trump administrations, have gone in the opposite direction.

“Currently, Biden plans to increase taxes but also to propose increases in entitlements, so it’s not going in the direction that will make this long run look more sustainable,” he said.

“The U.S. economy lost 22 million jobs. One of out every seven people lost their job in March and April,” he said.

“And we’ve gotten about half back.”

Recovery is dependent on several factors.

“I want to emphasize that the strength and durability of any economic recovery depends on the path of the pandemic, which is getting much worse, and on the arrival of a vaccine, and of course vaccinations, consumer willingness to resume normal activities and an additional federal stimulus, which we think is absolutely necessary,” he said.

Mary Daly, president and CEO of the Federal Reserve Bank of San Francisco, said that the COVID-19 pandemic has highlighted economic disparity in the country.

“Just 12 months ago we were in the midst of the longest economic expansion in U.S. history,” she said. “And overnight our fortunes changed.

“People have lost jobs, businesses and livelihoods, and the burden has fallen most harshly on those least able to bear it.”

Daly said that when she walks in her Oakland neighborhood, she sees many shuttered businesses that highlight the economic circle – businesses can’t pay rent to landlords, who can’t pay mortgages to banks, who then don’t have enough funds to loan to other businesses.

In addition, the racial wealth gap is limiting economic prosperity, she said.

Economists estimate that the aggregate economic output of the country since 2000 would have been $16 trillion higher if Black Americans had had equal educational opportunities and wages, she said.

“The COVID-19 response has made it clear that interest rate policies and lending programs do not reach everyone equally,” she said.

People who do business outside the traditional banking system aren’t able to refinance or initiate loans.

“To solve these issues and increase the reach of our financial infrastructure, we need to think outside the traditional banking box,” she said.

Partnerships with nonprofits and small-dollar lenders would help because those institutions are already connected to low- and moderate-income communities.

She lamented that the pandemic erased so much economic progress and increased economic disparity.

“But it’s also brought clarity of priorities and purpose,” she said.

“As we close this year, let’s bring that thread with us.” The Sun Devils (2-3-1) look to carry over their offensive momentum into the series and even out the all-time record against the Fighting Irish (0-2-0) after losing the opening series of the 2016-17 season 9-2 and 4-2 in South Bend.