Koop Bills is an Arizona State University senior in neuroscience and psychology who wants to pursue a PhD in cognitive neuroscience after graduation. Bills was the first recipient of the brand-new Jenessa Shapiro Undergraduate Research Scholarship designed to support underrepresented students in their pursuits of research opportunities. He is a research assistant with the Perception, Ecological Action, Robotics, and Learning (PEARL) Lab.

Bills’ personal research interest centers on astrocytes — glial cells in the brain — and on human memory and behavior, such as walking in a pandemic and how you approach people. For example, there is a general trend when walking toward someone to shift to the right side when passing. This bias is consistent worldwide, even in countries that drive on the other side of the road.

“Koop Bills has been working as a research assistant in the PEARL lab and attending lab meetings for over a year now, so I and graduate student supervisor Matt Langley have gotten to know him quite well. Like many others in this COVID-directed year, he was forced to change directions from a well-developed earlier project to one that could be run under social isolation conditions, but he has adapted well and come up with a nice, socially relevant study,” said Michael McBeath, professor of psychology and director of the PEARL Lab.

McBeath added, “He is a bright, thoughtful, and insightful student and researcher. He has had to endure personal hardship and spend a lot of time working many hours to earn a living while attending ASU, which has slowed down his progress up until now. But he now has a renewed vigor and is making good headway due to receiving the Jenessa Shapiro Research Scholarship.”

Bills was previously an engineering major, but after taking his first neuroscience course, he finished the semester and immediately changed his major.

“When you are reading something and you get to the point of thinking that it is so cool, that is something you should be doing more of. I found that when I read about astrocytes and neuroscience. I had to have more of it,” Bills said.

Video by ASU Department of Psychology

Bills has worked two jobs in the restaurant service industry for the past seven years to support his family while pursuing his undergraduate degree and serving as a research assistant in the PEARL Lab. He has had to make sacrifices that other students haven’t in order to pursue his passions and research.

This experience is representative of challenges that underrepresented students face regularly. Many students need to work multiple jobs in order to make ends meet while trying to study and achieve an undergraduate education.

“When I found out I was receiving the scholarship, I lost it and danced around,” said Bills, “It took a few moments to really set in how much my life had just changed from receiving this scholarship.”

The next day, Bills gave his two weeks’ notice at both jobs and refocused his schedule to be entirely research-centered.

Support from his research team

One of the most gratifying parts of the experience for Bills was the support he received from his mentors, McBeath and Matthew Langley, a doctoral student in the Department of Psychology. He hadn’t seen the application for the scholarship, and they pushed him to apply, encouraging him to work on the application a little bit every single day.

As Bills’ comments came through the shared document, they would edit in real time, even late into the night. They set up additional one-on-one meetings to make sure he was hitting his deadline to apply.

“That was the most amazing thing, to see the support I was receiving from my professors and how much they wanted me to get this scholarship,” Bills said. “They didn’t have to do this — I’m just an RA, I’m just a student — but they put in that extra effort, just because they care.”

“What really benefits the world is diversity. It is unique experiences getting to the highest level of education. It is the idea that we are better as a team, so if you are looking to donate to a fund, I think it is really important to give to scholarships like this one,” Bills said. “You just don’t know who someone can be, until they are given an opportunity to grow.”

The Jenessa Shapiro Scholarship, which is dedicated to supporting annually one to two students with funding of up to $5,000, is part of the ENERGIZE Initiative in the ASU Department of Psychology. The ENERGIZE initiative is designed to streamline the process of getting involved with research and working around requirements that would previously prevent underrepresented students from gaining the research experience they need.

Learn more or donate to the fund here.

Editor's note: This story is part of a series of profiles of notable fall 2020 graduates.Pooja Addla Hari found her calling her very first week at Arizona State University.She was attending the inauguration ceremony of the Generator Labs in 2016 when one of the leaders present talked about the new Technological Entrepreneurship and Management (TEM) program in the Ira A. Fulton Schools of E... 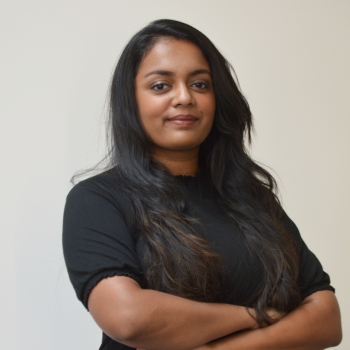 Pooja Addla Hari graduates this December with a bachelor's degree in technological entrepreneurship and management, plus a minor in statistics through the W. P. Carey School of Business and a certificate in cross-sector leadership from Watts College of Public Service and Community Solutions. Download Full Image

She was attending the inauguration ceremony of the Generator Labs in 2016 when one of the leaders present talked about the new Technological Entrepreneurship and Management (TEM) program in the Ira A. Fulton Schools of Engineering. The program prepares students to launch technology-based ventures and tackle social and corporate issues to impact the world around them.

"Instantly, I felt so heard and understood and I knew I belonged in that program because of its interdisciplinary format, top-notch faculty and resources," said Hari, who hails from Chennai, India. "I switched to it within two weeks, after discussing it with my trusted advisers."

This December, she is receiving her bachelor's degree in TEM, plus a minor in statistics through the W. P. Carey School of Business and a certificate in cross-sector leadership from Watts College of Public Service and Community Solutions. During her time at ASU, Hari received the New American University Scholarship, Public Service Academy Award and the Sustainability Champions Award.

Students in the TEM program learn a range of skills needed to develop new products, services and business models, as well as whole new industries. For Hari, it has already led to a position with a startup that uses technology to help people find better jobs and improve their financial situation. Learn more about her in the Q&A below.

Answer: The list of everything I’ve learned at ASU is endless. However, for the purposes of this (story), I’m going to share two examples. Prior to coming to ASU, I thought that “sustainability” was a field/concept limited to the environment. I didn’t understand the multidimensional, interdisciplinary, cross-sector nature of it. Here I learned that it includes social and economic aspects as well, learned about the UN Sustainable Development Goals, and got involved in a variety of coursework and outside-of-class projects. Secondly, I didn’t understand the depths of gender and sexuality until I came here and learned from several amazing folks, which helped me introspect, check my biases and understand my own sexuality.

A: Dr. Steve T. Cho taught me important lessons in all spheres of life — academic, professional, technical, personal, philosophical … you name it. He is one of the biggest reasons for my growth and successes in the last few years.

A: Adapting a quote from Harry Potter, “Help shall always be given at ASU to those who ask for it,” and oftentimes, even for those who don’t because ASU is all about inclusivity — we try to reach out to you and help before it’s too late. Nevertheless, asking for help is a great sign of strength and a valuable skill to have. If you don’t ask, the answer is always no. Don’t be afraid to voice your opinions, thoughts and ideas because there is always a place for you and what you have to offer here.

A: I’m the product and customer success manager for Enfuego Technologies, a Phoenix-based high-growth startup that streamlines the job application process by instantly generating resumes, customized to match any job description, using artificial intelligence and machine learning. We recently secured half a million dollars in funding from Schmidt Futures as part of the Alliance for the American Dream competition to achieve the challenge goal of increasing by 10% the net income of 10,000 middle-class Arizonans by 2022.

A: I would create locally focused, but globally available, upskilling and reskilling programs to help the unemployed and underemployed find quality, meaningful, high-growth work. This would not just help them increase their incomes, which would consequently increase their quality of life, health, leisure spending, etc., but also help them reclaim their sense of independence and purpose.