It will come as no surprise to anyone living in Phoenix that 2020 has been a record-breaking year for high temperatures. According to the National Weather Service, in 2020 the Phoenix area has surpassed all previous years for average high temperatures and excessive heat warnings.

With the combined oppressive heat and COVID-19 restrictions on travel and indoor activities like movies and restaurants, many people have turned to urban parks for outdoor recreation. 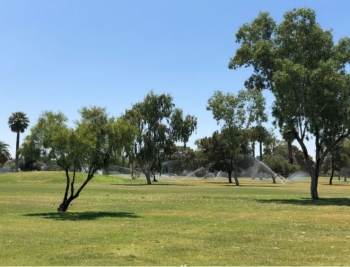 And while Phoenix area parks can serve as an oasis for residents, the irrigation needed to keep parks lush and cooler comes at a high cost of water consumption.

To determine this cost, a team of scientists led by hydrologist Enrique R. Vivoni of Arizona State University’s School of Earth and Space Exploration and School of Sustainable Engineering and the Built Environment spent a year collecting data on weather conditions, evapotranspiration and soil water at Encanto Golf Course in Phoenix. The results of their study were recently published in Geophysical Research Letters.

Vivoni and his team identified that the park showed what meteorologists call the “oasis effect,” which refers to the creation of a microclimate that is cooler than a surrounding dry area due to the evaporation of a water source.

“The word ‘oasis’ may conjure up the image of a pool of water surrounded by palm trees in a sandy desert,” Vivoni said. “But this same effect occurs in urban parks when heat from the surrounding neighborhood is transported by winds into the park, increasing the evaporation rates.”

To measure the oasis effect at Encanto Golf Course, Vivoni and his team used special sensors at a weather station located within the park. These sensors measured water and energy fluxes along with carbon dioxide exchanges depicting plant photosynthesis and respiration.

Vivoni and graduate students Mercedes Kindler, Zhaocheng Wang and Eli Pérez-Ruiz worked together on the sensor deployment, data analysis and use of satellite-based products to monitor the park conditions. 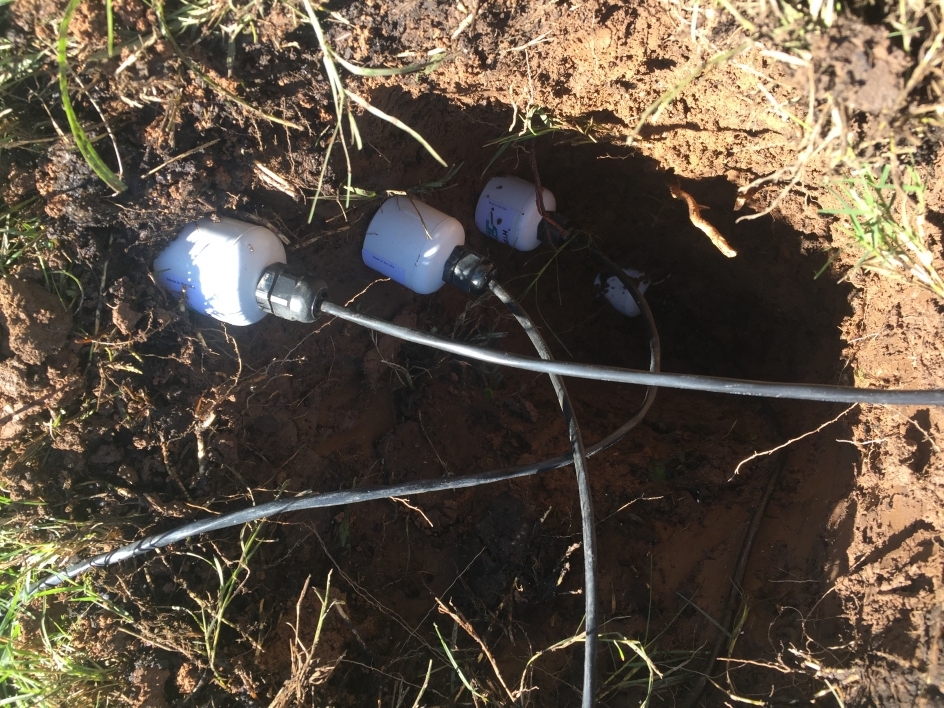 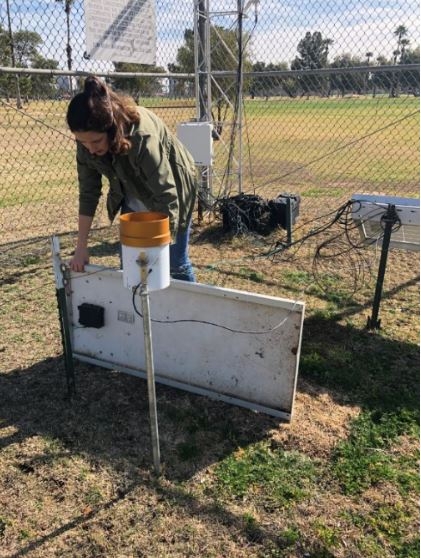 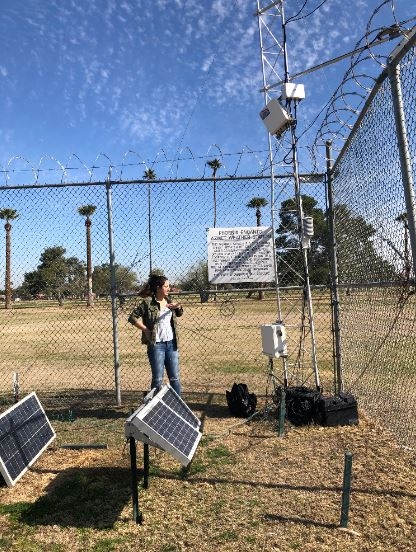 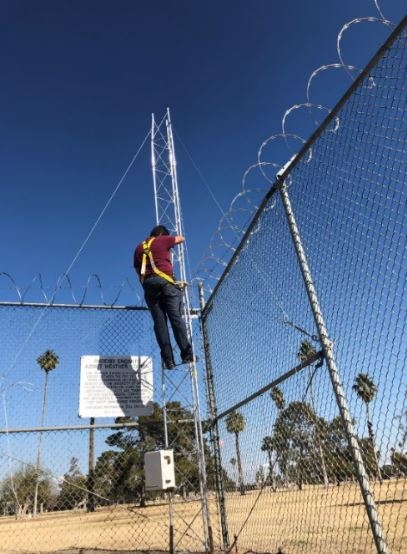 “We set up at Encanto Park in February 2019 and all of our instruments were operational by the next month,” Kindler said. “For a year, we conducted weekly or biweekly visits to the sites for data collection and station maintenance. It has been a great experience working on this research project, since it has allowed us to learn more about water and energy fluxes at an urban golf course.”

Their notable findings were twofold. First, the oasis effect led to unexpectedly high evaporative losses during the night. Second, the oasis effect was related to the evaporation of soil water and irrigation water, and not to the activity of plants and grasses in the park.

“Because of the oasis effect, when we irrigate our urban parks at night, we lose vast amounts of water and we see increased carbon dioxide emissions, which could lead to higher global warming potential,” Vivoni said. “This has important implications for water conservation and greenhouse gas emission management in desert cities such as Phoenix.”

While additional studies are needed to determine when during the day it would be preferable to irrigate, making this management change would decrease evaporative loss and the carbon dioxide emissions — which contribute to global warming — during hot, dry, windy days.

It also remains to be determined how widespread this effect is within Phoenix. Given the large number of parks and golf courses, however, it is anticipated that the results of this study will yield important regional consequences to be considered by state, county and city agencies.

Using storytelling and imagination to govern in the long term

Democracies have been getting worse at governing for our long-term interest, or so concluded two-thirds of the audience for “Governing for the Future,” a recent Future Tense webinar focused on how we can use science fiction, storytelling and imagination to contend with the problems of the 21st century and plan for the long term.Science fiction author Kim Stanley Robinson, Peter Schlosser, vic... 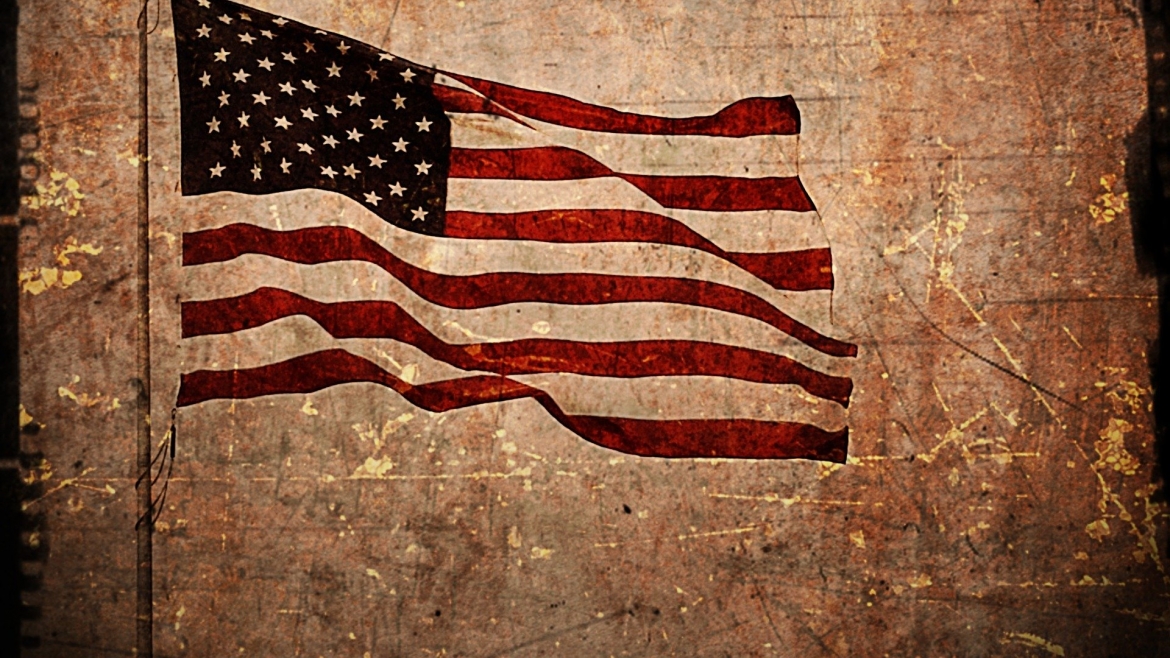 Using storytelling and imagination to govern in the long term

Democracies have been getting worse at governing for our long-term interest, or so concluded two-thirds of the audience for “Governing for the Future,” a recent Future Tense webinar focused on how we can use science fiction, storytelling and imagination to contend with the problems of the 21st century and plan for the long term.

“What a great moment to be having this conversation,” Finn said. “As we are reflecting on the question of democracy and the transition of power in the United States, we continue to reflect on the broader and global context of the challenges we're facing in terms of climate change, good governance and constitutions, and in terms of just getting along and fundamental forms of cooperation.”

Decision-making is often myopic and localized, and decision-making that focuses on small parts of enormous problems will prove insufficient for solving global challenges. Solving these long-term problems on a global scale will require new governance strategies.

“I think it is imperative that we start to make changes in the ways that our systems and democracies work,” Older said. “The nation-state system is far from ideal for dealing with global problems. And more and more all the problems that we are facing are global to one extent or another because we are so interconnected. We really need to start looking at how we govern ourselves differently.”

The imagination can be a catalyst for this kind of systemic change, because imagining disastrous consequences can help people better understand why governing should account for the interests of future generations.

“We are constantly toggling between effective and rational decision-making,” Schlosser said. “We are constantly pinged with immediate decisions that we have to make in our daily life that are urgent. That often wins out over long-term decision-making, which often has to rely on somewhat more abstract effects and features that we can take in and react to momentarily. But then we are distracted again by the immediate concerns. I think that is where we are really struggling to figure out how to address that and how to get into people’s minds that things will play out the way we project.”

People usually believe they are insulated from catastrophe if they are not personally experiencing any effects. Approaching governance as a storyteller — for example, explaining how worsening natural disasters from climate change will personally affect people’s everyday lives — is essential for eliciting change and governing for the future. But that will also require some rethinking of traditional storytelling devices, which may not be up to the task.

Future Tense is a partnership of Slate, New America, and ASU that examines emerging technologies, public policy, and society. The Nov. 10 event was part of “Us in Flux,” a new series of short stories and virtual gatherings convened by ASU’s Center for Science and the Imagination that explore themes of community, collaboration and collective imagination as a response to transformative events.