Arizona State University is entering that golden time of year when the desert at last turns its back on a relentless summer, and months of excellent weather stretch ahead.

And with the risk of coronavirus transmission lowerRisk is lowered but not eliminated. Wear face coverings in all of ASU's outdoor spaces and practice physical distancing. outdoors than inside, some professors are finding ASU's beautiful outdoor spaces a great option.

"I moved my class outside because the weather is beautiful," said Associate Professor Brian DeMaris, who has held his opera repertoire class outside the Music Building. "And all my colleagues at other institutions are going inside or going home."

Watch below how DeMaris' and other Herberger Institute for Design and the Arts performance classes took to the fresh air to reconnect. (And yes, those are trumpet masks.)

To make it easier for more of the ASU community enjoy its outdoor spaces, the university added 272 tables, 1,088 chairs and 113 benches across its four Valley campuses during the fall 2020 semester.

And in Tempe, there are four new "outdoor rooms" — shade structures with seating, power, lighting and Wi-Fi. They are located west of the Memorial Union, where Interdisciplinary A and B meet; southeast of Schwada Classroom Office Building; west of Mesquite Hall; and on Palm Walk, next to the Bateman Physical Sciences Center. Starting in the spring semester, professors will be able to reserve them.

“Whether it’s a study session on the library’s patio or a class in one of our new Wi-Fi-equipped outdoor rooms, ASU’s welcoming outdoor spaces allow professors and students to reconnect in person while reducing COVID-19 risk,” said Mark Searle, executive vice president and university provost. “We’re encouraging faculty to find creative ways to utilize all of ASU’s spaces in their classwork. Let’s enjoy our beautiful campuses.” 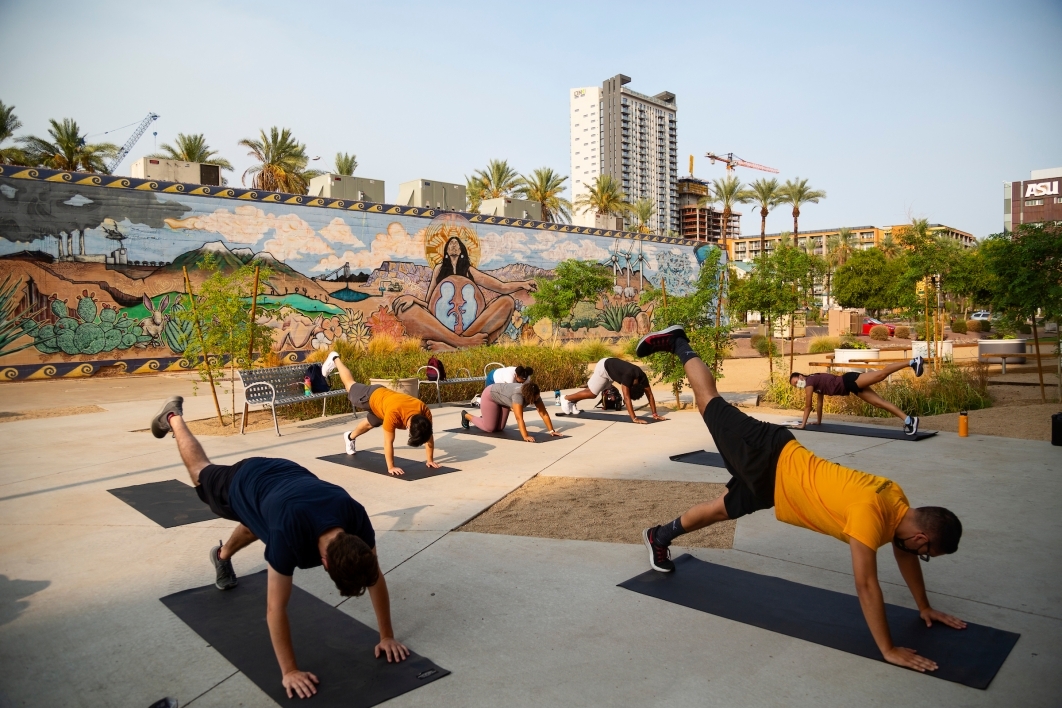 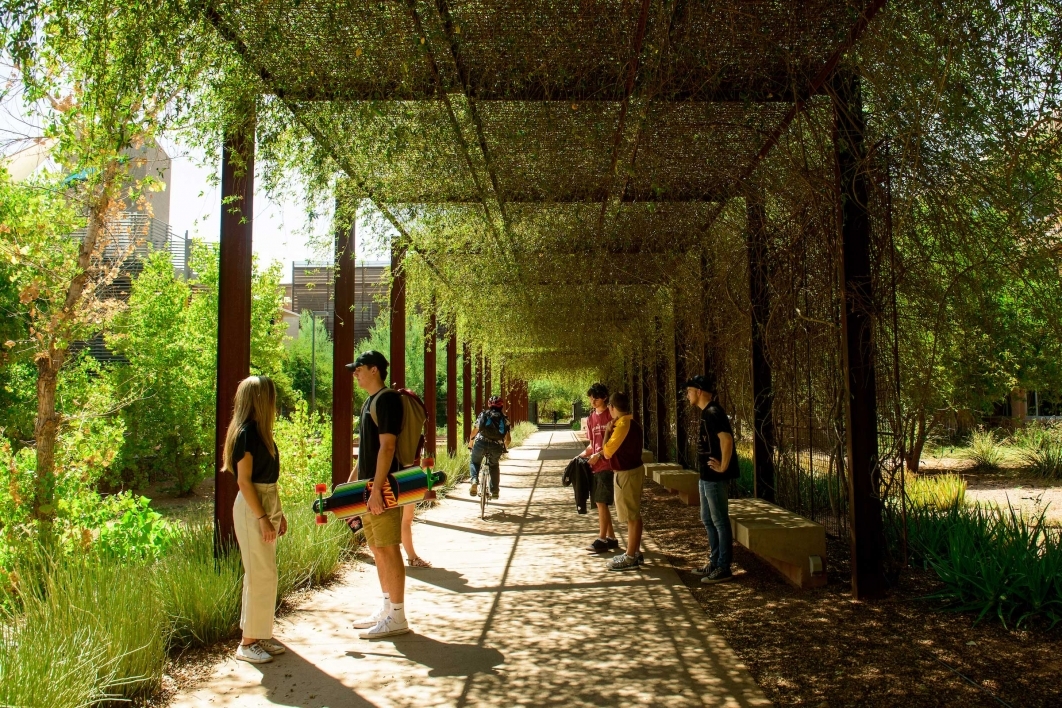 ... to the surprisingly verdant desert beauty on display in this prepandemic photo of the Polytechnic campus ... ... to the color-changing "Air Apparent" Skyspace by James Turrell on the Tempe campus ... ... to the stately serenity of the West campus, modeled after the cloisters of Oxford and Cambridge. Each building has a courtyard, and every courtyard has a unique water feature. To help ASU's community enjoy its spaces, the university added four outdoor rooms in Tempe that feature seating, shade, fans, Wi-Fi and abundant outlets. Pictured is the first one to be constructed, between the Memorial Union and the Interdisciplinary A and B buildings. Professors can use the rooms for classes, and starting in the spring semester, they will be reservable. 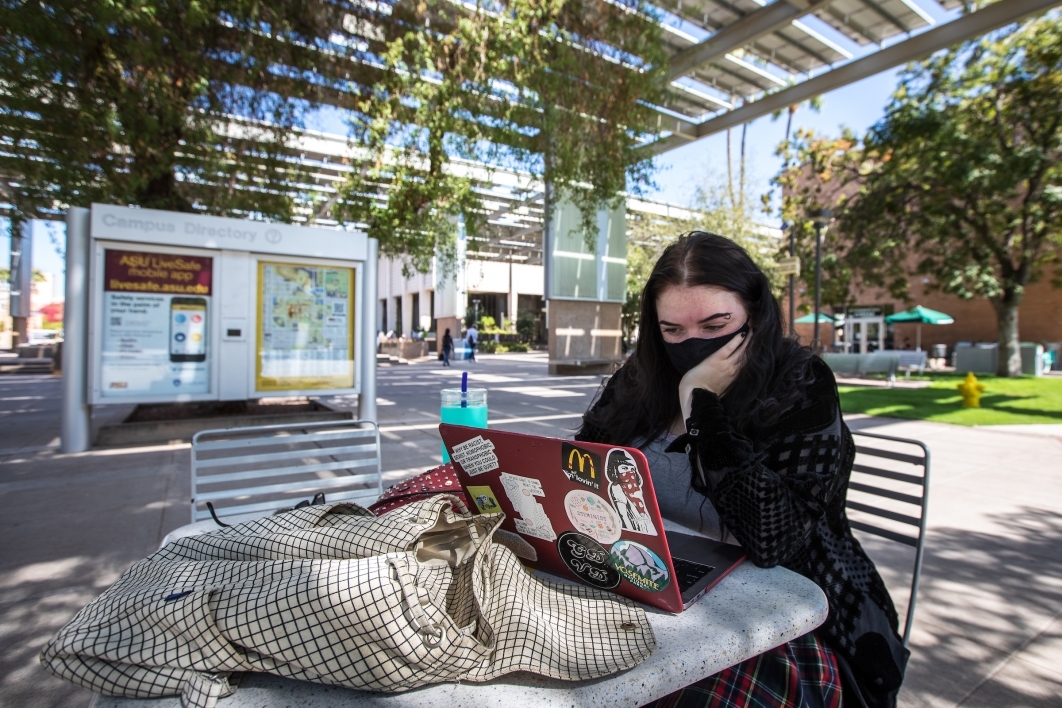 Grace Spotts takes a break between classes outside the Memorial Union on the Tempe campus midday on Oct. 20. She is in her third year studying biomedical sciences and psychological sciences. To encourage more people to use ASU's outdoor areas for study and socializing, the university added 272 tables, 1,088 chairs and 113 benches across its four Valley campuses this fall. 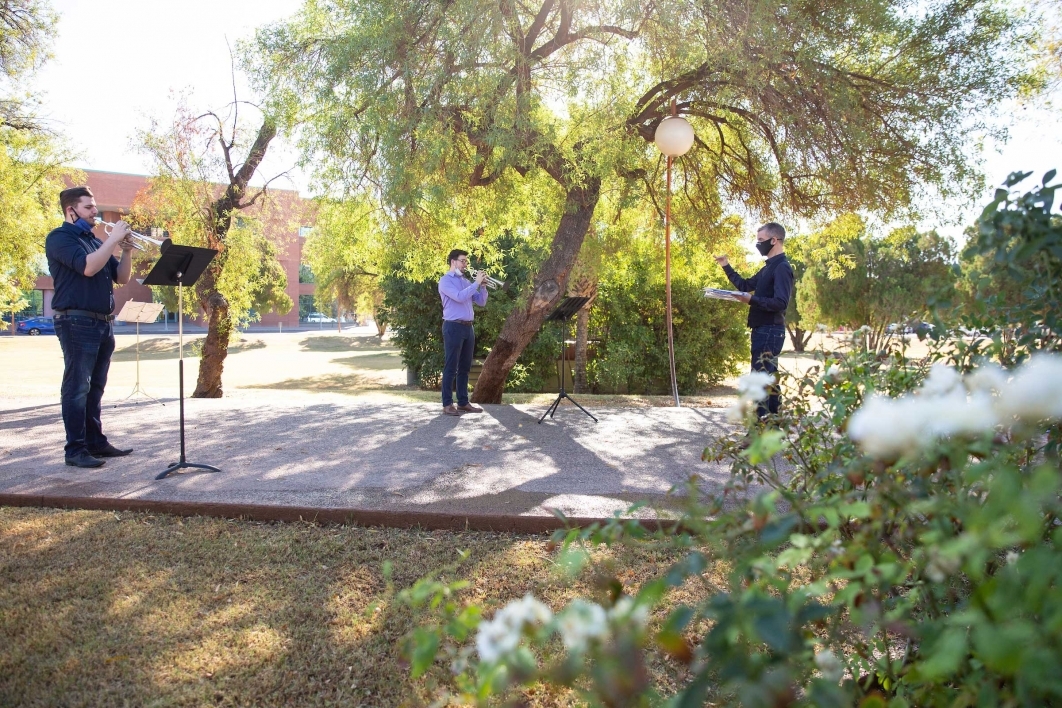 Some classes are already venturing outside to take advantage of cooler weather. Here, Associate Professor Joe Burgstaller (right) leads his students during the trumpet studio group lesson in front of ASU Gammage on an early Friday morning in late October. Players use instrument bell covers as they play and space 18 feet apart to be as safe as possible when playing together. 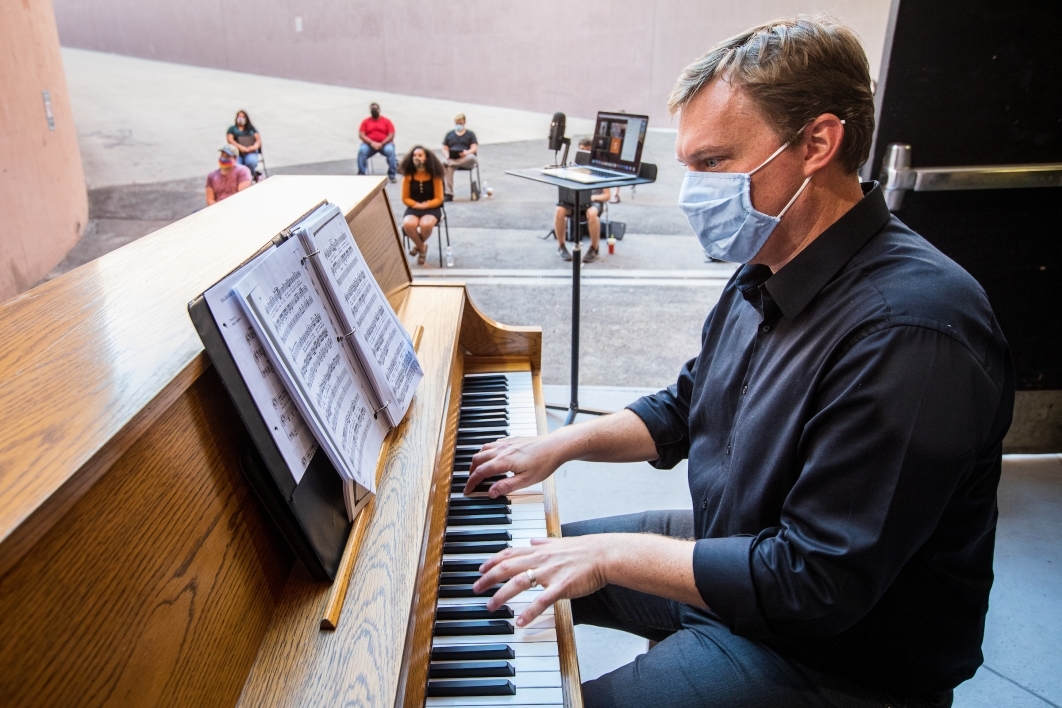 Associate Professor Brian DeMaris plays as his students practice their works in his opera repertoire class on Oct. 22 in the loading dock of the Music Building on the Tempe campus. (Why the loading dock? Because moving a piano across a lawn is a challenge.) A third of the class participated through ASU Sync on Zoom. 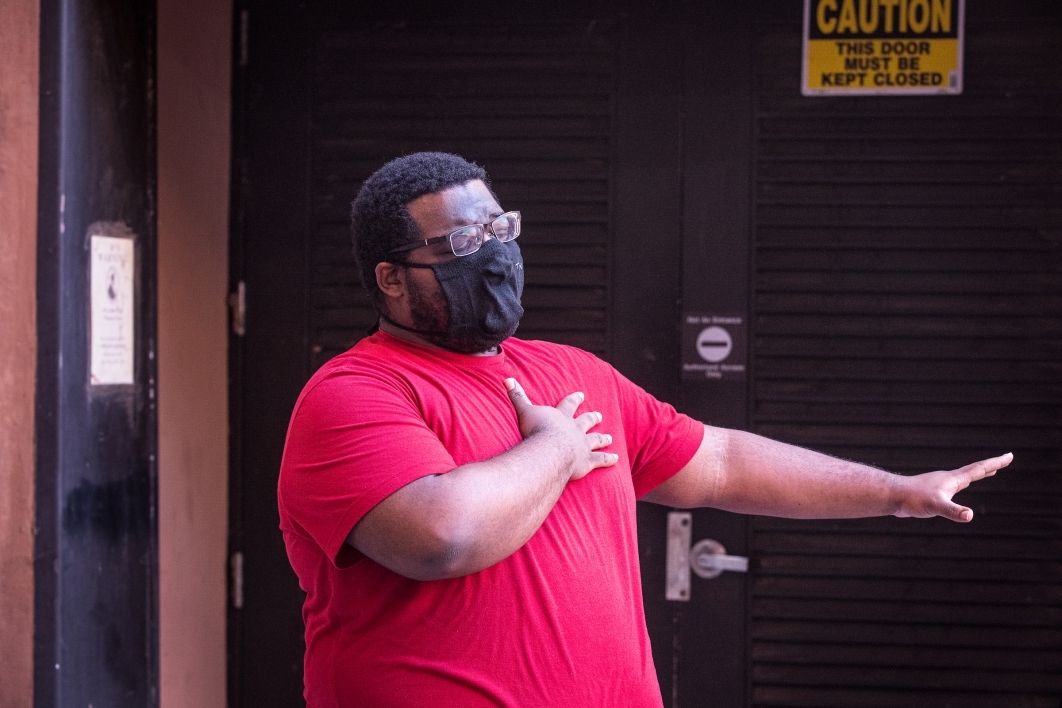 ASU faculty, are you taking your classes outdoors? Please contact the ASU Now team at asunowpitches@asu.edu and let us know about your plans.

Election Day is here and the Indian Legal Clinic at the Sandra Day O’Connor College of Law at Arizona State University is out in full force continuing its efforts to ensure Arizona’s tribal communities and tribal members have access to the polls.Leading the Arizona Native Vote Election Protection Project, in partnership with the Inter Tribal Council of Arizona, the National Congress of America...

Election Day is here and the Indian Legal Clinic at the Sandra Day O’Connor College of Law at Arizona State University is out in full force continuing its efforts to ensure Arizona’s tribal communities and tribal members have access to the polls.

Leading the Arizona Native Vote Election Protection Project, in partnership with the Inter Tribal Council of Arizona, the National Congress of American Indians, and the Native American Bar Association of Arizona, the clinic has been providing multiple resources leading up to today’s general election. 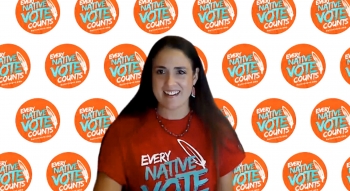 The tools include a dedicated website, an “incident command center hotline” to answer voter questions, an interactive map to help voters find their polling locations, and student-led training and organization of approximately 100 volunteers manning polling locations. The hotline, 1-888-777-3831, is available if voters are experiencing any problems or have questions.

ASU Law Professor Patty Ferguson-Bohnee, faculty director of the Indian Legal Program and director of the Indian Legal Clinic, has been leading the initiative and development of resources since 2008, including the addition of Torey Dolan as the the clinic's first-ever Native Vote Fellow. Dolan was brought on board last year in anticipation of this election and helped to create the voting map. The Indian Legal Clinic organized a webinar on National Voter Registration Day in September to celebrate the Native American right to vote.

Despite the Indian Citizenship Act of 1924, Native Americans in Arizona were denied the right to vote until 1948, and state law continued to deny voting opportunities for Native Americans through laws, policies and practices until 1970. Ferguson-Bohnee was joined in the webinar by Maria Dadgar, executive director of the Inter Tribal Council of Arizona; Gov. Stephen Roe Lewis of the Gila River Indian Community; and Derrick Beetso, general counsel for the National Congress of American Indians. The panel discussed the history of Native Americans’ fight to win the right to vote in Arizona and why it is important to register and vote today.

In a recent Time magazine interview, Ferguson-Bohnee said, “It’s not just voting but also voter registration that is difficult this year for Native Americans, many of whom register in person because they lack good internet access,” and many Native people lack a formal address and official identification, which complicates things further.

“It’s not their fault they don’t have a standard address or have no need for a state ID — that’s a huge issue which disproportionately impacts native people and their ability to register and participate in the election,” she said.

Navajo Nation Attorney General Doreen McPaul also was referenced in the Time article. McPaul, a 2001 ASU Indian Legal Program alum, testified before Congress in February, saying that about 70 of the Navajo Nation’s 110 chapters “do not have street names or numbered addresses, which adds up to at least 50,000 unmarked properties.”

Ferguson-Bohnee was instrumental in organizing ASU Indian Legal Program students in a call for volunteers to serve at polling locations in Indian country. Students held a virtual training with the volunteers who will be assisting at 58 polling places.

If you experience difficulty voting on Election Day or have questions about voting, call the hotline at 1-888-777-3831. For more information, contact the Indian Legal Clinic at 480-727-0420 or at indianlegalclinic@asu.edu. 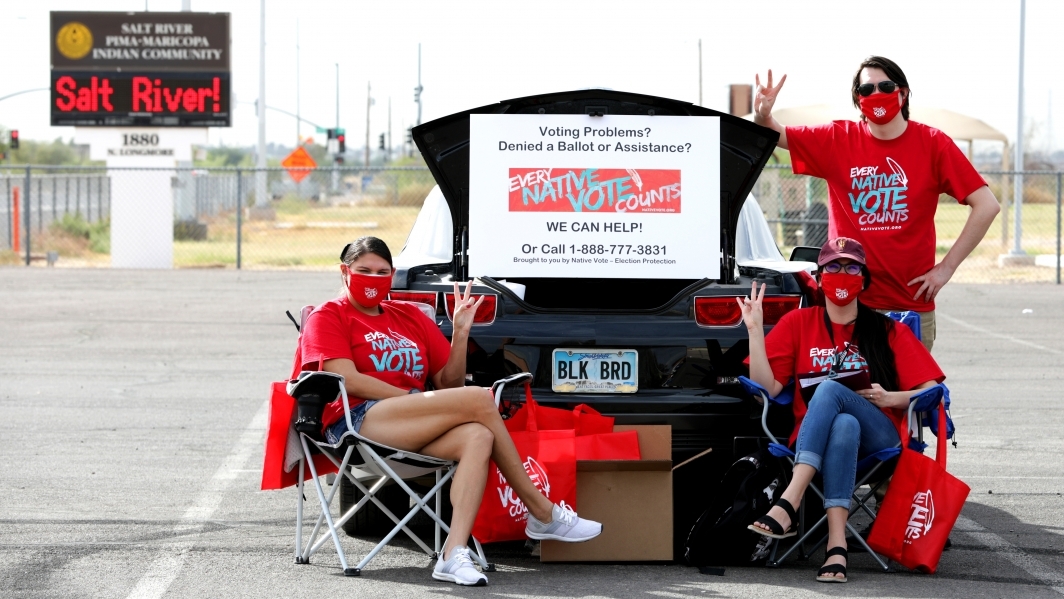 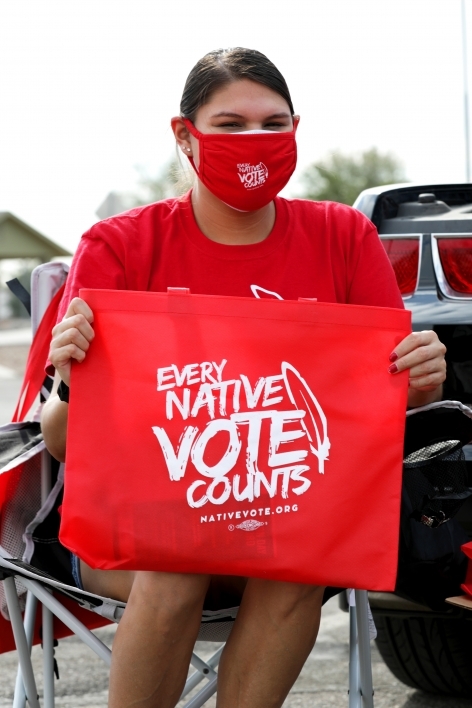 ASU Law third-year student Mariah Black Bird with resources available to help get out the vote in Arizona's Native communities on Election Day. 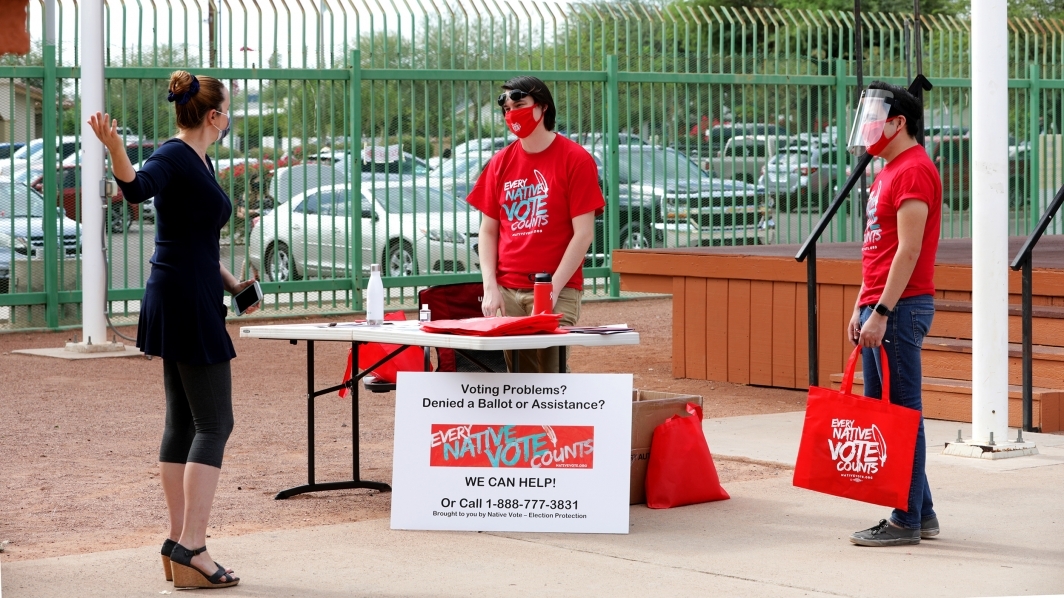