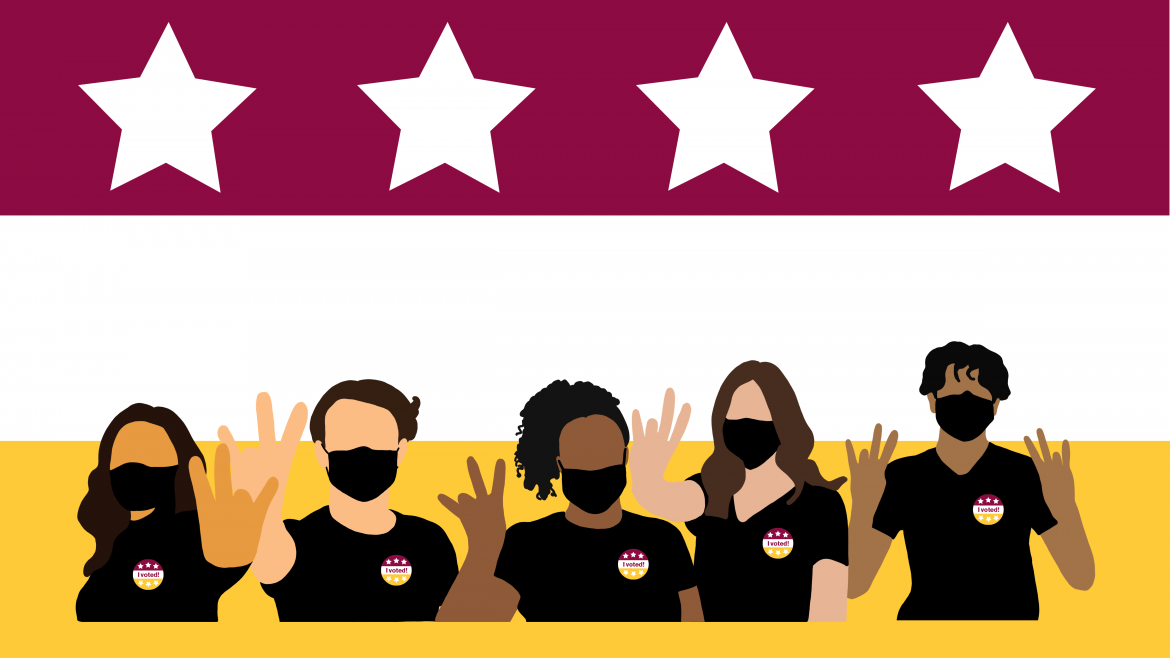 Why your voice matters

Amid the COVID-19 pandemic, early voting in the 2020 election in Arizona has surged nearly 100% in the state's three most-populous counties. Voters are turning out in record-shattering numbers to ensure their voices are heard. With early voting locations on or near all four Arizona State University campuses, students, employees and members of the public have ample opportunity to cast their ballots.

In advance of the election, faculty from The College of Liberal Arts and Sciences shared their thoughts on the importance of exercising the right to vote, interesting facts about Election Day and personal anecdotes about their voting experiences.

Question: Why should ASU students participate in the election?

Karen Adams, professor, Department of English: Your voices are important, as are your views and concerns. Don’t think that things will go your way every time or that if your candidate didn’t win the primary that sitting out the election is OK. When you vote for most offices and candidates, what you are voting for is a group of people who will have access and even make government appointments. Think about who is likely to move into positions because of party affiliation or the skills they demonstrated during the primary. Often, they can still make known the issues that matter to you.

Lisa M. Anderson, associate professor, School of Social Transformation: Students should participate in the election because it is an essential part of our democracy. Elections help us to determine the direction of the country, and students — who will live with the consequences of any election for longer — should be investing in having their voices heard. As a Black person, I know that people died in order for me to have the right to vote, and voting is honoring their sacrifice.

Paul Carrese, director and professor, School of Civic and Economic Thought and Leadership: Schools and higher education now tend to emphasize the right to vote and don’t equally discuss it as a civic duty – but from America’s founding principles onward, this fundamental civic act was understood as a responsibility of all citizens who were eligible, partly to show gratitude for the ordered liberty and the relative security and prosperity Americans enjoy compared to many other places in the world; and some Americans believe that gratitude extends to the creator who endows us with inalienable rights, as the Declaration puts it.

Vera Lopez, professor, School of Social Transformation:  Students should absolutely participate in this election because their future depends on it. Climate change, racial injustices, economic inequalities … these are just a few of the issues our world is currently facing. As a longtime faculty member in ASU’s School of Social Transformation, I know our students care deeply about these issues. Now is the time for them to use their voices, now is the time for them to roar. The world is listening.

Deirdre Pfeiffer, associate professor and associate director of planning, School of Geographical Sciences and Urban Planning: Students should keep in mind that the November 2020 election promises to be historic. The candidates we elect at the federal level will determine the fate of our democracy, environment and race relations for decades to come. The candidates we elect at the state and local level will shape how our communities weather and recover from the COVID-19 pandemic. Policies made at both levels will directly influence students’ ability to find and keep decent jobs in the fields that they’re training for after graduation, afford housing and live in places where they can grow their families and thrive. By voting, students accept the challenge of being active builders of their own futures rather than passive recipients of a future created by others.

Q: What is something interesting about the U.S. election process and Election Day that people might not know?

Fabian Neuner, assistant professor, School of Politics and Global Studies: Something that I think people might not know and that might be good to know this year concerns when early ballots are counted. As elections are administered by the states, the procedures for when mail ballots can be processed differ by state. With some being able to process weeks before the election and others only starting on Election Day. This means that mail-in ballots contribute to the overall results differentially by state, which might lead to lots of confusion among the pundits on election night. In some states we’ll see results early in the night being heavily skewed by early ballots, whereas in some states the bulk of early ballots will only be counted in the days after the election. Just something to be aware of as you watch election returns.

H.L.T. Quan, associate professor, School of Social Transformation: The 15th Amendment, extending the right to vote to African American men, was ratified in 1870. As early as 1868, states developed various techniques meant to systematically disenfranchise Black people — from vigilante mob violence and state-sponsored massive fraudulent schemes to writing a whole new Constitution. Until the voting Rights Act of 1965, poll taxes, literacy tests, grandfather clauses and all-white primaries were employed to suppress votes by Black people and other people of color. In recent years, 25 of 50 states have implemented various voting restrictions that disproportionately affect Black and other voters of color. According to one report, as of 2016, over 20% of Black adults in Florida, Kentucky, Tennessee and Virginia are disenfranchised.

Krista Ratcliffe, chair and professor, Department of English: Women in New Jersey were able to vote between 1776-1807; then the right went away until the 19th Amendment became law in August of 1920, giving women across the nation the right to vote even though women mostly meant white women, and it took four decades for African American and Indigenous women to be able to vote in the U.S. election system.

Sujey Vega, associate professor, School of Social Transformation: In the 1960s, James Meredith was wounded by a sniper for trying to register African Americans to vote. Suffragettes in the early 20th century were jailed, tortured and force-fed for advocating for a woman's right to vote. Citizens with Asian descent were denied the right to vote from the 1920s to 1952. Native Americans were denied the right to vote, even in Arizona, until 1947. Intimidation, literacy tests and poll taxes kept people from voting as late as 1982. In 2013, parts of the Voting Rights Act of 1965 were chipped away making voter suppression once again rampant throughout the United States. People literally died for this right. Brave individuals continue, to this day, to fight for the rights that so many of us take for granted. We owe it to them to proudly submit our ballots and not let those who would deny us this right to win out.

Q: What is a personal memory you have associated with Election Day?

Jonathan Barth, assistant professor, School of Historical, Philosophical and Religious Studies: At the beginning of fall semester 2016, I had accidentally scheduled a History of Money exam for the day after the presidential election. I later discovered this error but didn't want to confuse students by suddenly changing the syllabus halfway through the semester. The students came in the morning after the election and the very last thing they had on their mind, of course, was the Free Silver Movement in the 1890s. I regretted not postponing the exam and made up for it by offering a generous curve. Needless to say, I was careful this semester to not time an exam for the day after the election.

Carrese: I now have lived for two decades in states that conduct elections largely by mail, Colorado and Arizona, but I grew up in New York state and studied in New England when almost all voting occurred in person, and often churches and schools were polling places; so I now miss seeing fellow citizens on Election Day, and I recall my parents bringing me to the polling place as a boy so that I could see fellow citizens participating in one of the great rituals of self-government.

Kim Fridkin, foundation professor, School of Politics and Global Studies: When I was 18 years old, I became very interested in the presidential election being waged and I worked to elect one of the presidential candidates as a high school senior and then as a freshman in college. The candidate that I worked for ended up losing dramatically in the general election. Because of that election, I became fascinated with the factors that drive people to vote a certain way. I’ve been interested in that question throughout my entire career, although I know a lot more now than I did then.

Lopez: I vividly remember the first presidential election I ever voted in. I had been too young to vote in the 1988 election, but I was ready in 1992. I was a 21-year-old junior at the University of Texas at Austin. When the polls opened at the local elementary school on Nov. 3, I was one of the first in line to cast my ballot. I remember feeling goosebumps as I marched down the school hallway with my head held high to cast my vote for Bill Clinton. Early on, I recognized the struggles of the brave folks before me who fought for my right to vote. When I vote, I honor their legacy.

Neuner: I want to share a lesson to always check your voter registration to make sure you’re properly registered. I remember one election in which there was an administrative mix-up that prevented me from voting and I will never forget the frustration I felt that day.

Vega: I take my son with me to drop off my ballot and together we honor the lives of those fellow citizens who fought so hard for us to be able to do so. This civic familial bond carries forward to my mother who was not born in this country but became a citizen later in life. I can distinctly remember calling her on election night in 2008 and just screaming and crying since we were both so incredibly moved to tears at the election of President Barack Obama. We knew that there was still a lot of work to do in this country, but we felt ecstatic that this was a move that meant this country was finally in a place to move forward together.

Sun Devil Baseball alumnus Austin Barnes made history for the Los Angeles Dodgers on Tuesday as he helped lead his squad to its first World Series Championship since 1988. ... Sun Devil Baseball alumnus Austin Barnes made history for the Los Angeles Dodgers on Tuesday as he helped lead his squad to its first World Series Championship since 1988.