In the wake of the COVID-19 pandemic, universities have had to find and adopt new ways of building, maintaining and creating communities for students to flourish in and remain connected through. The School of Arts, Media and Engineering at Arizona State University has taken a creative approach to solving this issue.

Daniel Jackson, a staff member at the School of Arts, Media and Engineering, decided to lead an operation to help strengthen the school’s community by developing a server on the video game Minecraft where students, staff and faculty can co-mingle and build replica ASU environments. With the approval to build this server, Jackson enlisted the help of several digital culture students over the summer to design and recreate the Stauffer B building on ASU’s Tempe campus, where the majority of digital culture classes are held. “With the approval of a new concentration in Games and Interactive Media, the expressed interest among (digital culture) students and at the request from the (Arts, Media and Engineering) executive team, we decided now would be a great time to launch a Minecraft server,” Jackson said. “With many students spending much of their time in isolation, my hope is that by creating this virtualized environment and the associated Discord server, students will be able to connect in a more intimate environment and perhaps recreate, to some degree, the creative, collaborative digital culture community.”

After several months of working within the server, it is now open and ready for students to join in and start creating together. This server is currently limited to digital culture students and faculty, but the team hopes to welcome people from all over the ASU community as they grow.

On top of developing and designing the server, Jackson and his students have also developed an easy to navigate hubspot where new players to the game can learn the basics and receive guidance, while returning players can have access to collaborative opportunities within the server to help build and design new environments. By leveraging the platform Canvas, they have designed an easy way to navigate around and join in the fun without feeling lost. Jackson and his team will have moderators on the servers to help guide people through the experience.

We spoke with one of Jackson’s students, Mia Ramos, a sophomore at the School of Arts, Media and Engineering, who has been with him since inception, about the process and what she hopes this community server will provide.

Question: How long did it take to recreate Stauffer B? What are some of your favorite areas you created?

Answer: We started around the beginning of September. My favorite area right now is the Equipment Pool, because it was the first room we started with.

Q: How do you see this server impacting the School of Arts, Media and Engineering community? What are your hopes for this server?

A: I see this server bringing the AME community together during these hard times. I hope that this server will bring some joy and some smiles to our community as we all face the pandemic.

Q: What are your future plans for this server?

A: My future plan is to expand the building even further, adding titles, fun plugins and mods for the community, and maybe some NPCsnon-player characters of some of the faculty/ staff such as Althea Pergakis, Kayla Elizondo-Nunez and tech team members.

Q: What was the hardest part about building this server and designing the building? How did you overcome it?

A: The hardest part was the beginning; it started with a small group of people just brainstorming. Not all of us knew how to use Minecraft or how to create a server. There were days where Dan and I were troubleshooting the server on our own. But those days helped out in the end! We eventually got the hang of the server controls.

Designing the building was hard at first. I started with one room at first, then realized just how big the actual building was. I couldn’t do it on my own. Dan suggested getting volunteers from AME, and they’ve been such a huge help! It’s thanks to our community that the building exists in Minecraft now.

Q: Do you think this exercise helped to strengthen any of the skills you are learning at ASU and the School of Media, Arts and Engineering?

A: Creating and building the server has definitely helped my design skills and my leadership skills.

Q: How can people join if they want to help build/play together?

A: Due to limited resources and server capability, the initial launch will be for AME/DC students. The DC Minecraft Server Community will be accessed/ hosted through a Canvas Org. DC/AME students who would like to join can email Dan Jackson djackson@asu.edu or Mia Ramos maramo14@asu.edu.

Q: Who helped build Stauffer B?

A: We have a small group of wonderful early adopters that are helping create Stauffer B so far:

Award-winning journalist and White House correspondent Peter Alexander has covered tsunamis and wars, interviewed dictators, and at times, clashed with President Donald Trump.Holding the powerful accountable sounds like a contact sport, but Alexander said he wouldn’t trade his fast-paced, pressure-filled, all-consuming job for anything.“There are a lot of sacrifices with this job but if you co... 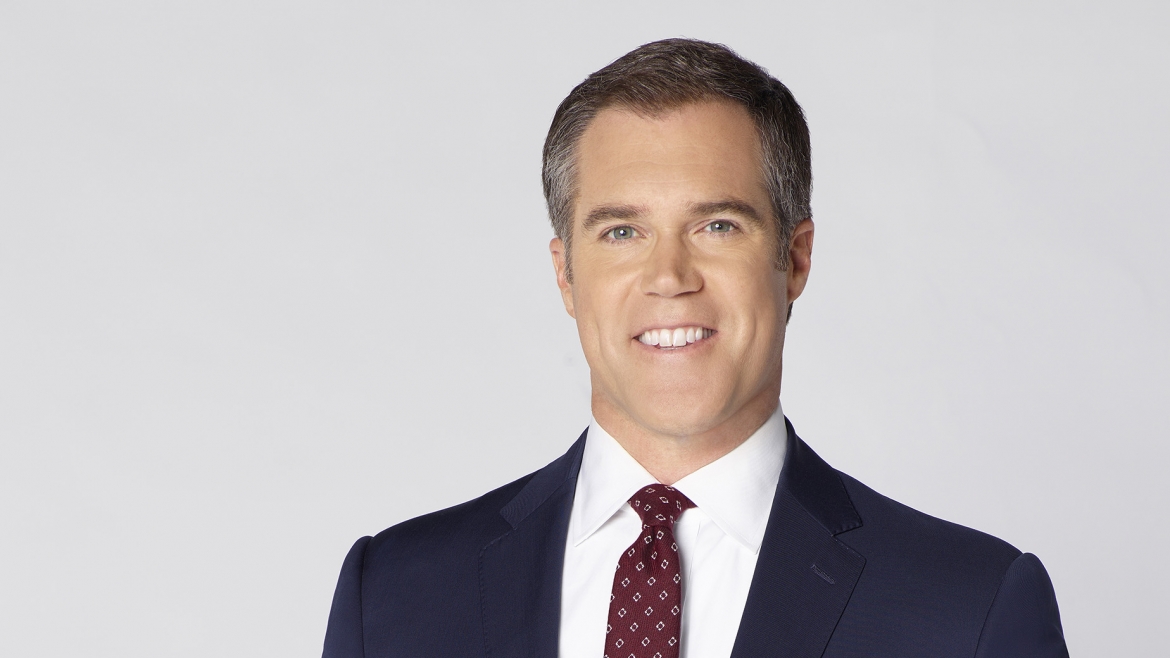 Holding the powerful accountable sounds like a contact sport, but Alexander said he wouldn’t trade his fast-paced, pressure-filled, all-consuming job for anything.

“There are a lot of sacrifices with this job but if you commit to doing this, I guarantee you will have life experiences whether it’s at the network or local news or in whatever community,” said Alexander, a "Weekend Today" co-anchor and NBC News White House correspondent. “Doing this job gives me a unique opportunity to make a difference. It’s a heck of a way to live.”

With two weeks left until Election Day 2020, Alexander discussed his experiences and insights in a talk titled “Political Crossroads: Reporting on the White House,” as part of the fall 2020 Must See Mondays speaker series, hosted by ASU's Walter Cronkite School of Journalism and Mass Communication.

“Peter is a shining example of one of the basic tenets of journalism – holding the powerful accountable,” said Brett Kurland, professor of practice and director of sports programs at the Cronkite School, who moderated the live Zoom event on Oct. 19. "He is quite literally on the front lines, sitting in the front row of the White House briefing room, questioning the president of the United States and various members of the administration. He is never afraid to challenge and fight for the truth. Peter is a wonderful role model for our Cronkite students.”

And Kurland ought to know. The two men have a shared history that dates back to the mid-1990s when they were classmates at the Medill School of Journalism at Northwestern University.

“Peter is one of my oldest friends in journalism. We met during the first week of our freshman year of college. We lived in the same dorm for two years and went through many of the same journalism classes together,” Kurland said. “We were hallmates in our sophomore year. Peter actually introduced me to my wife, so I am forever grateful.”

He was also grateful for the informative and wide-ranging discussion Monday night, which painted a picture of a White House correspondent’s job. 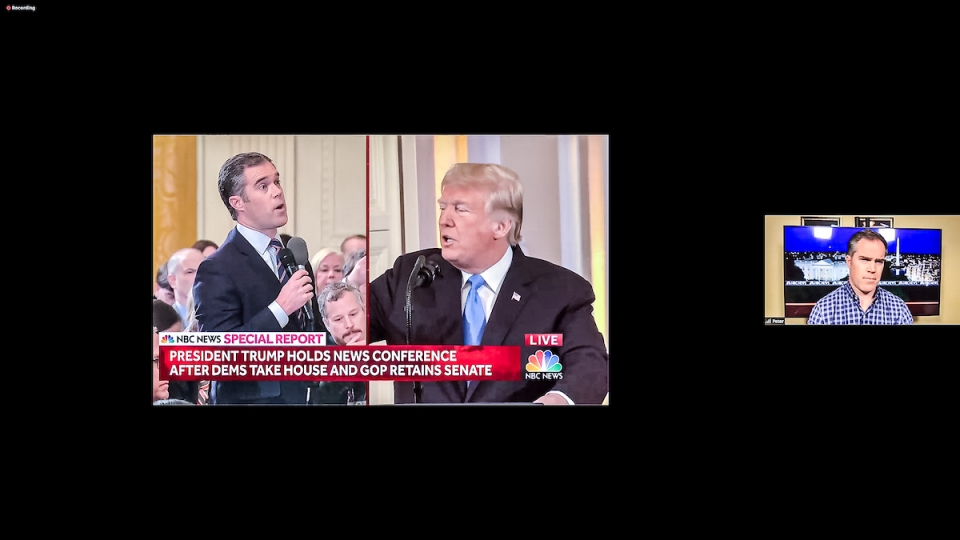 Cronkite Professor of Practice Brett Kurland played this clip of Peter Alexander, a White House correspondent for NBC News, having an exchange with President Donald Trump earlier this year. Kurland moderated the Zoom conversation and Q & A for the Cronkite School’s Must See Mondays speaker series on Oct. 19.

Alexander's fascination with journalism took hold in his youth while growing up in San Francisco.

“We would watch the "CBS Evening News" with Dan Rather and see these reporters signing off from Moscow and from Beijing and from Boston,” Alexander said. “That just intrigued me and it felt like such a cool, unique way to live your life.”

After college graduation, Alexander landed jobs in Lexington, Kentucky, and Spokane and Seattle, Washington, as a lead reporter and substitute evening anchor and covered the 2000 presidential campaign.

In 2004, he was hired by NBC News and covered numerous international stories, including Iraq’s historic 2005 election, the death of Osama bin Laden and the tsunami in Indonesia. He also interviewed then-Cuban President Fidel Castro during Hurricane Ivan in 2004. Alexander also covered national breaking news events, including anchoring live coverage of the “Miracle on the Hudson” and the tragedy at Virginia Tech. He got his sea legs with sports reporting covering the 2008 Beijing Olympic Games, the 2010 Vancouver Olympic Games and the 2016 Rio Olympic Games.

“I remember going through there and angelic music was played,” Alexander recalled. “My heart was beating out of my chest as I walked in. I couldn’t believe it. The idea that I would be reporting and the most powerful person on the planet is going to be standing somewhere in the middle of that building behind you as you were speaking and conceivably watching.”

Alexander spent a majority of his time with Kurland talking about the last four years, when a change in administration also brought about a distinct change in mood among the White House press corps. He constantly hears President Donald Trump call him and his colleagues “fake news media” and “an enemy of the people.” He also watched Trump dress down CNN’s Jim Acosta as a “rude and terrible person.” When Alexander stepped up to defend Acosta, Trump had words for him as well.

“I’m not a big fan of yours either, to be honest,” Trump said. In another instance, Trump called Alexander a “terrible reporter” in front of his colleagues when he asked a COVID-19-related question.

Alexander said he takes such comments in stride.

“To be totally sincere, I’m kind of used to it now, which is probably not a good place,” he said. “When the president says ‘fake news’ or ‘enemy of the people,’ it doesn’t even get a headline like it did early on but that doesn’t make it any better. Somehow I dare say ‘normalized,’ but we’ve become so used to it.’”

Alexander works hard to manage the challenges that come with the 24/7 news cycle, the first Twitter presidency, the era of “alternative facts” and the number of major breaking news stories in the past year. That includes the Russian collusion investigation, Trump’s impeachment in the House of Representatives, the COVID-19 pandemic, the death of George Floyd, the 2020 presidential race, President Trump testing positive for COVID-19, the death of Supreme Court Justice Ruth Bader Ginsberg and the confirmation hearings for Amy Coney Barrett.

“There’s a lot going on,” Alexander said. “News is breaking at a pace you cannot fathom. Our news cycle can turn on a dime. … There’s a lot to juggle. It’s a ton of different topics and you can’t be an expert on all of them, but you sure better know about plenty or most of them.”

Alexander said the best antidote to the demands of the job is to stay focused, rely on instincts and report the facts.

“I view myself now really more than ever as an advocate for the facts,” Alexander said. “The best thing you can do is know the facts and know the context. … It’s about the people we cover and we’re going to do our damn best every day to get the best information to Americans.”