Decades of progress for Latino scholars at ASU

They’re future diplomats, entrepreneurs and community advocates. But they’re also effecting change in the present day. Currently 110 Sun Devils make up the cohort of Latino Partnership Scholars, a collaboration between Arizona State University and partner organizations that was founded in 1984 to support underrepresented students and make a collective impact for access to education in the Latino community.

Originally launched as the Hispanic Community Partnership Program, the initiative established an endowment thanks to an investment from Freeport-McMoRan to the Una Promesa Para el Futuro Campaign. In 2007, the program became known as the Latino Partnership Scholars, with current partners including Chicanos Por La Causa, the ASU Chicano/Latino Faculty and Staff Association, Hispanic Business Alumni, Los Diablos Alumni and the Si Se Puede Foundation. 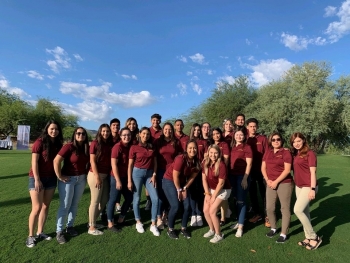 Together, the scholarships have supported students earning 605 degrees from 2011–19 alone, to the tune of $6.5 million total. The awards support students who are already serving their communities, and one award focuses on science, technology, engineering and math majors. The percentage of Latino Sun Devils among enrolled students at ASU has grown from 14.6% in 2009 to 23.7% in 2019.

Celina Villa, an ASU junior majoring in psychology and minoring in human and family development, said her scholarship through Chicanos Por La Causa has fundamentally changed not only her academic life but her professional track and her mental health during COVID-19.

“I was personally in a really, really dark spot because COVID hit and I think a lot of kids went through an anxiety and depression phase,” she said. “It kind of felt like they pulled me out of that hole and were like, listen. You’re doing great things. You need to realize that. And realize how many lives you’re impacting right now by being a part of this.”

Every Latino Partnership Scholar participates in networking, community service and mentoring activities. For Villa, her service work has put her in a leadership position in Chicanos Por La Causa's information technology office, where she coordinates the distribution of hundreds of computers to local families who need devices for at-home schooling. Experiences like this have showcased how the scholarship impacts her “beyond education.” Villa said she has met a lot of people who have influenced her life.

“I’ve been taught so many things,” she said. “It’s really awesome, especially for someone who had no idea what IT is. I think I’ve taken on the perspective of how can I apply my degree to something that's very out of the ordinary.”

Villa, who is from Laveen, graduated with her associate degree through dual enrollment and AP credits in high school. Though her ultimate goal is to pursue her master’s degree and open her own psychology practice as a trauma specialist for children, Villa said she wants to stay in the Valley and stay involved with Chicanos Por La Causa and the community.

For first-year Sun Devil Genesis Rivas, her Laura Rendón Scholarship through the ASU Chicano/Latino Faculty and Staff Association was a poignant moment as a first-generation college student. She grew up acutely aware of the hardships her parents faced, and her family had been facing financial stress for months before she was about to start college.

Her mother immigrated from Culiacán, Mexico, and endured family separation, having to sleep outside in sweltering temperatures and acclimating to a new culture when she arrived in the United States. Rivas, who is majoring in marketing, said she wants to radiate pride for her family and her culture.

(The scholarship) just gave me a moment to reflect on what I come from,” she said. “We have so many more privileges than my mom ever had. I put my energy toward making her proud, my dad proud.”

Rivas already has a lot to be proud of. As a high school student she was involved in the Make a Wish Youth Leadership Council, student government and also in March for Our Lives Arizona as a special projects director. She helped organize summits, lobby days and town halls about gun violence prevention in her junior and senior years at Westview High School in Avondale. She helped pass a resolution in Tolleson Union High School District to provide more mental health services for high schoolers; she even met some of the student advocates who had been affected by the Parkland, Florida, shooting in 2018, an event that inspired her to get involved in youth activism.

“The 2016 election was the start of everything for me. It kind of woke me up into the state our country is in,” she said. “And then once Parkland happened, there was never really a movement for youth. And I saw that. I was so amazed. I got to meet a bunch of the creators.”

She said it was emotional when she received her scholarship because she had been panicking about loans. The news came right in time, and she’s loved being a part of her cohort so far, attending heritage events and connecting with peers and mentors.

“I screamed and showed (the scholarship letter) to my mom,” Rivas said. “She stood up, started screaming, crying, and it just made me so happy to see that my hard work finally paid off for something.”

Rivas said she’s happy to have the chance to meet her fellow scholarship recipients and connect with them. “It’s a close-knit community,” she said.

A sense of community also looms large with business and Chinese language and culture sophomore Armando Hernandez, whose scholarship is through Los Diablos Alumni. Hernandez is passionate about representing the intersections of his identity as both Latino and gay, and he is very inspired by his fellow scholarship recipients.

“(The scholarship) has meant so much. … It is the connections. I have found amazing people who are some of the most compassionate and motivated people I have ever met,” Hernandez said. “It’s so inspiring to see another group of Latinx students who are not only motivated but they have goals and dreams.”

Hernandez said he’s inspired to be surrounded by friends who have such impressive goals.

“Some of these people want to be an astronaut and they want to go to Mars, and that motivates me and that makes me very happy to know that my Latin Hispanic community is out there,” he said.

Hernandez, who is from Phoenix, said he has also gained invaluable professional development in service, mentorship and networking for his future career in the foreign service.

“They have provided me with so many amazing opportunities to meet new people within my field,” he said.

Growing up surrounded by his entrepreneurial family, Hernandez was drawn to the business field and has been busy working on his Chinese, working with the Arizona Human Rights Campaign and keeping students civically engaged through his job as a resident assistant at Hassayampa (he has a goal that all his residents will be registered to vote).

From his perspective, his entire university experience has been amplified by being part of the Latino Partnership Scholars program.

“A lot of us would not be here in university if it weren’t for the scholarship,” Hernandez said. “It has really truly enriched our educational experience here at ASU. Just providing us with more resources and allowing us to make connections with people who are like-minded.”

Vice President of Outreach Partnerships Edmundo Hidalgo said that the Latino Partnership Scholars program is an opportunity to multiply the impact that scholarships have on students who deserve support. The program also helps work toward ASU’s goal of parity in six-year graduation rates across racial and ethnic groups. ASU provides funding annually for the program, and fundraising is ongoing to build on that financial base.

Maria Elena Coronado-Sutter is a co-coordinator for Chicanos Por La Causa's scholarship program and can’t help but see the connection between the ASU students who formed Chicanos Por La Causa more than 50 years ago and modern day scholars, many of whom are first-generation students and low-income students. Chicanos Por La Causa's Executive Vice President of Strategy and Relationship Management Max Gonzales said that the organization is proud to have been a partner for more than 15 years, interviewing scholarship applicants and connecting them with resources for student success as well as instilling a sense of service to the community.

“After they graduate they don’t forget that they also have a responsibility to bring others with them,” he said. “We hope that they achieve all the success they want to achieve in their lives, but let’s not forget that you have a whole community behind you that we need to lift up. And if we can instill that in the forefront of their mind when they’re out there and they’re succeeding, then we have been successful.”

ASU set to host future regionals for three other sports. ...

ASU set to host future regionals for three other sports.