Craig and Barbara Barrett weren’t looking to have a college named after them when they created an endowment to support the University Honors College at Arizona State University 20 years ago. 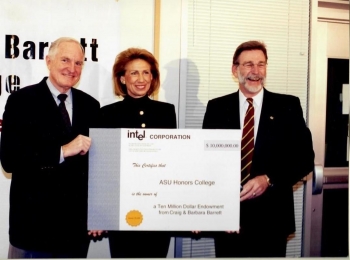 The couple’s ties to ASU and the business, political and philanthropic communities were strong. Barbara earned bachelor’s, master’s and law degrees from the university and went on to distinguish herself in business, education and government, including serving as ambassador to Finland. She currently serves as U.S. secretary of the Air Force. Craig was chairman of the board and CEO at the Intel Corp., a leader in science, and a higher education advocate. He currently serves on the faculty at ASU’s Thunderbird School of Global Management. They also shared a long friendship with ASU President Lattie Coor and his wife, Elva.

According to Ted Humphrey, founding dean of the honors college, the Barretts’ gift came about after a conversation they had with the Coors.

“ASU was entering the final stages of its to-then largest capital campaign. The Barretts and the Coors were longtime good friends who often had dinner together at one another’s homes. As I understand it, on a Sunday evening, as the Barretts and Coors were doing dishes after one of those dinners, Craig and Barbara told the Coors they wanted to ‘do something substantial for the campaign,’ ” Humphrey recalled.

As Craig Barrett remembers it, “we wanted to join in the vision of making the honors college the academic heart of the university that could attract great students from Arizona and all over the country.”

“We weren’t looking for any naming opportunity. We really wanted to support the honors college to help it grow,” he said.

About a week after that conversation between the Barretts and the Coors, then-President Coor contacted Humphrey to discuss directing the Barretts’ gift to the University Honors College and asking how the funds would be used.

“I drew up a plan for using $100,000 immediately, putting about $150,000 in a reserve fund and investing the rest. Lattie took the plan to the Barretts and then, having consulted me, suggested the gift be an endowment and that the college be named for the Barretts.”

While the Barretts agreed to the financial terms of the gift, “it took some time for them to agree to the latter,” Humphrey said, referring to their preference to keep the spotlight on the honors college and not on the source of its support.

In 2001, Coor surprised the Barretts with the news that the Arizona Board of Regents determined to name the college after them.

In addition to that serendipitous conversation between the Barretts and the Coors, there were several factors that led up to the gift, said Kristen Hermann, Barrett Honors College senior associate dean of students.

“First, Craig and Barbara Barrett were community stakeholders dedicated to the economic, social and cultural vitality of Arizona, and they knew that for intellectual capital to flourish there needed to be investment in high-quality academic experiences in the state,” Hermann said.

Second, President Coor — who understood the value of an honors college at a public university that was giving access to high-performing students and elevating the academic profile of the university as a whole — had a critical role in providing the college with resources and support, she said.

“He was exceptional at articulating the value of the college while crediting his predecessor President Russ Nelson and Ted Humphrey with doing the heavy lifting by establishing the honors college in 1988,” she said.

A third significant factor was the honor college’s rapid success under Humphrey’s leadership.

“Although we were among the first three university honors colleges, by the time of the gift, there were more than 75, and we needed to distinguish ourselves from the pack. The name allowed us to (do that),” said Humphrey, who passed the reins of the honors college to Barrett Dean Mark Jacobs in 2003 and retired as ASU emeritus professor in 2015.

And importantly, the Barretts’ gift inspired others to support the honors college.

“I believe the gift had an impact on several donors who wouldn’t otherwise have considered us,” Humphrey said.

Jacobs said the Barretts’ support was “absolutely critical to the growth in quality and the concomitant increase in visibility of the honors college” that is now known as the “gold standard” among public university honors colleges in the U.S.

“It has always been not only about the extra funds for critical programs that their gift supported, but the confidence that the people of Arizona have in the Barretts’ vote for this honors college by making it the recipient of their largesse. Once Barrett Honors College became known as super high quality, many other donors have supported us for that reason alone,” Jacobs said.

Barrett Honors College has lived up to the expectations bestowed upon it, Jacobs added.

“Hundreds of top students — National Merit Scholars, National Hispanic Scholars and ASU President’s Scholars — who would have gone out of state (to college) even 20 years ago are now staying in-state and in-state at Barrett. This influx of hundreds more of these students than we ever had before has lifted not only the high school GPAs and SAT scores for all of ASU, but improved the class participation across the university,” Jacobs said.

The Barretts’ gift not only helped grow the honors college, but it strengthened the university too.

“Through their dedicated engagement and generous support of ASU, Craig and Barbara Barrett have advanced our mission to enhance access and excellence among students from all walks of life and exemplified true leadership,” said ASU President Michael Crow. “While all Barrett Honors College students are high achievers, it is their diverse backgrounds and experiences that make BHC and our university stronger, and we are grateful to the Barretts for making that possible.”

The Barretts’ support of the honors college has continued throughout the years. They routinely attend honors college convocations, where they deliver inspirational remarks and stand for hours shaking each graduate’s hand as they walk across the stage, offering them congratulations and posing for photos. Whenever they can, the Barretts attend the annual Celebrating Honors Symposium of Research and Creative Projects, a showcase of honors students’ theses and creative work.

The Barretts also have helped students grow professionally, with Craig connecting students to internship and employment opportunities at Intel and Barbara assisting students with government internships and jobs.

At the 2017 Barrett Honors College convocation, Jacobs announced another significant gift from the Barretts to support global citizenship programming for students.

“It will allow the honors college to support its students as they become responsible global citizens while educating them about the issues and challenges that the international community and planet face,” Jacobs said.

Twenty years after the Barretts’ gift, the honors college that bears their name has grown in size and stature.

“The reputation is not so much in a name, it’s in the results. And I see those results at every honors convocation we attend,” Craig Barrett said, explaining that honors graduates often tell him they are going on to law school or medical school or teaching positions where they can make a positive difference.

“We see the results of the opportunities we support and how students take advantage of them. It’s absolutely rewarding to see the continuity of the honors college and its results year after year. It gets better and better.”

View a video about the impact of the Barretts’ gift.