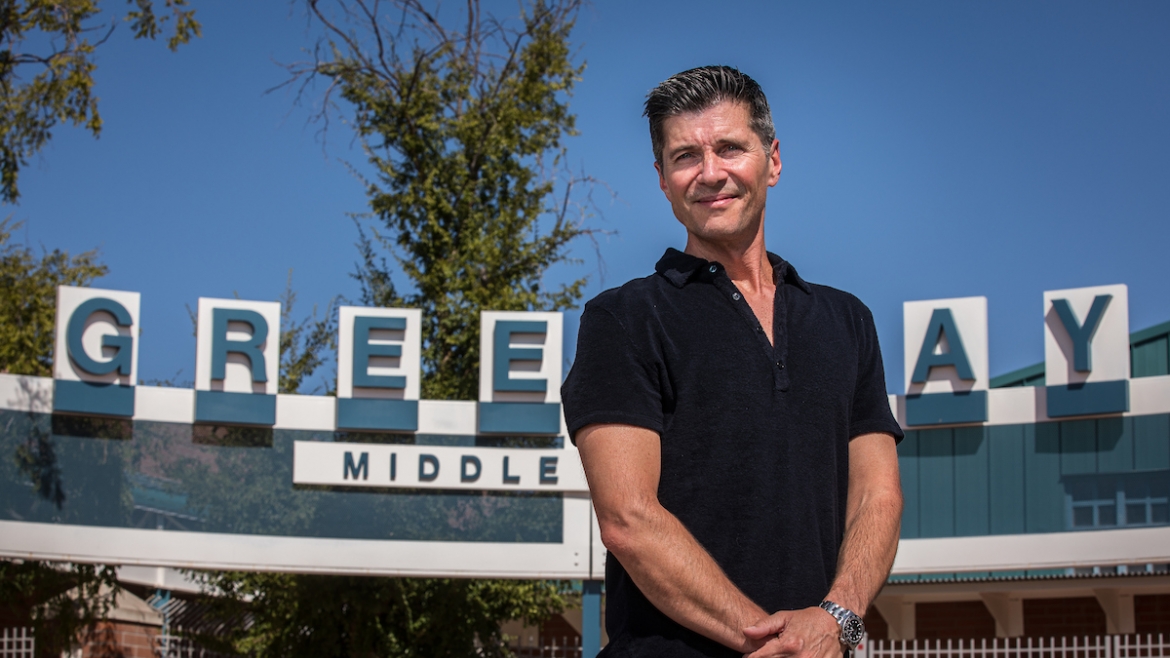 He knows how painful the transition can be when elementary students have to make the jump to junior high school. The stresses of navigating grades, mental well-being, burgeoning sexuality and new social structures often causes anxiety and negative academic outcomes.

However, his work aims to ease that stress and offer guidance that will make students' lives more manageable.

“Nine of 10 students in the U.S. transition from the familiar neighborhood elementary school to a larger, more complex, and typically more distant middle school or junior high school,” Borman said. “We wanted to help students find greater success in middle school and help reassure them that they are not alone during this stressful and difficult time — their schoolmates are going through the same transition process and teachers and other adults in the school can be trusted to help.”

Borman, a Foundation Professor of Quantitative Methods and Education Policy at Mary Lou Fulton Teachers College, speaks from experience. He led a 2011 research study at the University of Wisconsin-Madison, “Reappraising Adversity Improves Students’ Academic Achievement, Behavior and Well-Being,” for middle schoolers in that state, which received international attention and coverage from Time, the Washington Post and more distant outlets such as the Guam Daily Post and China’s Southern Weekly. The goal of the study's intervention was to reassure students that it's not just them — everyone has some difficulties when entering middle school — and to suggest that they, too will overcome them.

The study team designed simple but psychologically precise intervention exercises for Wisconsin tweens at virtually no cost. The students took part in two 15-minute reading and writing activities featuring stories based on the sentiments shared in focus groups by previous years' students. These anecdotes highlighted the core messages of the intervention: that nearly all students struggle to fit in at first but eventually realize they do belong; advice on ways to engage in social and academic life; and confirmation that other students and teachers are there to help. The first exercise focused on academics; the second on interpersonal relationships. Students then wrote reflections on the information they had read and how to apply it to their own lives.

A follow-up study in 2018 was implemented in seven middle schools in the Paradise Valley School District in Arizona. The results of the two studies were stunning: fewer days of school missed, better behavior, improved social and psychological well-being and better grades.

ASU Now spoke to Borman, who recently moved from Wisconsin to Arizona, about his work, research and how his project is transforming lives.

Question: Why did you choose to focus your research specifically on middle schools?

Answer: Outside of infancy, the overall developmental changes that children experience during early adolescence are more significant than those seen at any other time of life. Kids are also navigating the socially and psychologically difficult transition to a new middle school, which is unlike their first five or six years of formal education in so many ways. In grade school, most students are under the care of one teacher during each year, but middle schools suddenly demand that students develop new relationships with several teachers. These relationships with teachers in middle school are generally more formal and distant. There are larger and more cliquey networks of students, and social interactions with peers become more complicated. In early adolescence, children become increasingly aware of how others, especially their classmates, see them, and they are desperately trying to fit in. A bad day in the lunchroom or a bad grade on an assignment can cause them to question whether they are going to turn out to be popular or successful students who fit in both socially and academically. It is a difficult time of life in schools, and we wanted to help.

Q: What was the motivation behind conducting the Madison study?

A: Similar interventions focusing on helping students navigate the transition from high school to college improved school outcomes for select groups of low-achieving and historically marginalized students of color. Also, these results tend to suggest particular benefits for these groups of students who are making the transition to a highly selective college. We had originally thought that the intervention would help close middle-school achievement gaps between African American and Latinx students and their white and Asian counterparts and that there may be some differences in the impacts across different middle schools. As it turned out, though, the exercises benefitted all students equally, regardless of gender, family income, race, or ethnicity, and the results were consistent across all of the 11 participating schools. These results seem to reflect the more widespread and consistent uncertainties experienced by all students at this difficult educational and developmental transition, which reduces the importance of both individual and school-to-school contextual differences.

Q: The results of the Madison study led to international acclaim. What were some of the most interesting findings?

A: The students who received the intervention reported greater trust in their teachers, that they liked school, were not as nervous about important tests, and that, ultimately, felt like they fit in. These more positive attitudes about school helped students worry less, which helped them devote more cognitive and psychological resources to doing well in school. Their increased sense of fitting in also led to fewer absences from school and fewer instances of acting out. Over time, these shifts in student beliefs and behaviors improved academic performance, which then reinforced students’ positive beliefs. Rather than the all-too-often downward spiral students experience at the onset of middle school, the intervention set in motion some positive momentum that helped kids feel like they do belong.

Q: Given the strength of the Madison findings, what motivated you to study this again?

A: We were excited about the potential of the intervention to make a difference for more students across the country. In addition, though, as scientists we wanted to make sure that our results were not a fluke. There is currently a great deal of concern in the social sciences, especially within social psychology, that some results from important studies are not reproduced in new studies of the same intervention. This so-called “replication crisis” has been highlighted by a number of examples of new studies that, in fact, do not show the same positive results of the original landmark studies. We wanted to see if our exciting original results could be reproduced in an entirely different context and at a slightly different time of transition, as students move to middle school at grade six in Madison but transition at grade seven in the Paradise Valley Unified School District.

Q: How is it that your simple intervention produces such strong results?

A: It is pretty remarkable that two 15-minute reading and writing activities made such a difference. A big part of it is timing. We work with the schools to administer the two exercises at the beginning of the school year, before students have begun to develop a strong perspective of whether they are going to fit in academically and socially. With our intervention we try to teach students two important lessons. First, the exercises convey that all students experience some difficulty, both socially and academically, at the beginning of middle school. After a little while, though, things get better. When students read our exercises, they hear about anecdotes from their peers who have experienced the same struggles. By helping students understand that this adversity is normal and short-lived, they learn that there is not something wrong with them and that there is a light at the end of the tunnel.

Second, the exercises tell students that help is available from teachers and other adults at the school. Usually, students’ trust in their teachers wanes during middle school. These relationships become more distant and potentially negative, as greater emphasis is placed on teacher control and discipline. However, our exercises may have helped students see their teachers in a different light and feel more comfortable with them.

Finally, tweens don’t particularly enjoy being lectured at or given advice by adults and generally prefer hearing the perspectives of their peers. Our exercises ask students to read vignettes, ostensibly written by their peers who were experiencing similar feelings of belonging uncertainty when they began middle school a year prior. The vignettes are first-person quotations about students’ academic and social belonging uncertainties that, over time, resolve in a positive direction. After reading these anecdotes, the exercises prompt students to reflect in writing on what they just read, considering how they might address their own difficulties fitting in and how those difficulties could become easier to manage over time. These written responses help students reinforce and internalize the messages. After coming to realize that the worries that they are experiencing are both normal and transitory — rather than unique to them and enduring — students feel less anxiety and are better able to perform to their true potential in middle school.

Q: Where will you take this work now?

A: I receive many calls and emails from middle-school educators across the country and I am very interested in testing whether we can replicate these results in other places. As I am making the move to ASU, I particularly hope to connect with other school districts in the Valley that are interested in helping us further test the intervention and, hopefully, we can help make the middle-school experience better for their students.

Top photo: Geoffrey D. Borman is the new Foundation Professor of Quantitative Methods and Education Policy at Mary Lou Fulton Teachers College. He stands, on Saturday, Sept. 26, 2020, in front of Greenway Middle School, one of seven Paradise Valley School District middle schools that were part of his landmark research that started at the University of Wisconsin, "Reappraising Adversity Improves Students' Academic Achievement, Behavior, and Well-Being." Photo by Charlie Leight/ASU Now.

Sun Devil Football took to the field for the first official practice of the 2020 season. ... Sun Devil Football took to the field for the first official practice of the 2020 season.