Tempe campus
Senko on surprising marine life and plastic findings: “It caught us off guard.”
No evidence yet to suggest plastic causes population decline in marine life.
October 9, 2020

The carcass of an albatross chick, covered in bottle caps. A dead sperm whale on a Scottish beach, stomach full of debris.

Horrifying images, to be sure. But is plastic pollution causing populations of large sea animals like these to decline?

There is no scientific evidence to support that it is, according to a new study led by a marine biologist at Arizona State University.

The research examined 1,200 peer-reviewed studies published over the past 50 years that described interactions of marine wildlife with plastic pollution. Of these, only 47 studies considered population-level effects of plastic interactions with marine megafauna.

“I think there's some glimmer of hope in this study that is showing at least at current levels, it really isn't affecting these animals on a population level,” said lead author Jesse Senko, an assistant research professor in the School for the Future of Innovation in Society.

“We did not expect this when we started the study,” Senko said. “It caught us off guard.”

Graphic photos shock readers, but threats that don’t show up well on cameras are more serious, Senko said. Climate change, fisheries bycatch, habitat degradation, noise pollution, and direct catch for human consumption are all threats that have been proven to cause population levels to decline.

“It’s not a free pass for people to use as much plastic as they want. I think we should still aim to reduce it, obviously. But I think we really need to think about how we cover this problem because I fear that it draws away attention from the real threats.”

“If you look at the amount of coverage plastic pollution gets, it's really disproportionate compared to all the other threats,” Senko said. “The take-home is we know that plastic pollution kills individual animals. And it's certainly an animal welfare issue because not only does it kill them, it causes a lot of suffering, but there's no evidence yet to suggest that it causes any population decline in any of these species.”

Some species are more tolerant of plastic than others. Senko pointed to certain populations of large whales where almost 80% of the animals in that population have become entangled in plastic and eventually shed the gear. Sea turtles can have plastic in their guts for as long as four months.

“In a lot of cases, sea turtles and seabirds will just poop the plastic right out,” Senko said. “And so a lot of the mortality that we've attributed to the plastic might actually be because the animals are sick. … Sometimes animals wash ashore dead and they have a bunch of plastic in their stomach. Scientists will do a necropsy and say, ‘Oh, the animal died of plastic pollution.’ Well, it turns out that what we're starting to see is sick animals tend to feed on plastic so that it may be that the animal was already sick and then interacted with plastic. It's not necessarily the plastic itself that's killing the animals.” 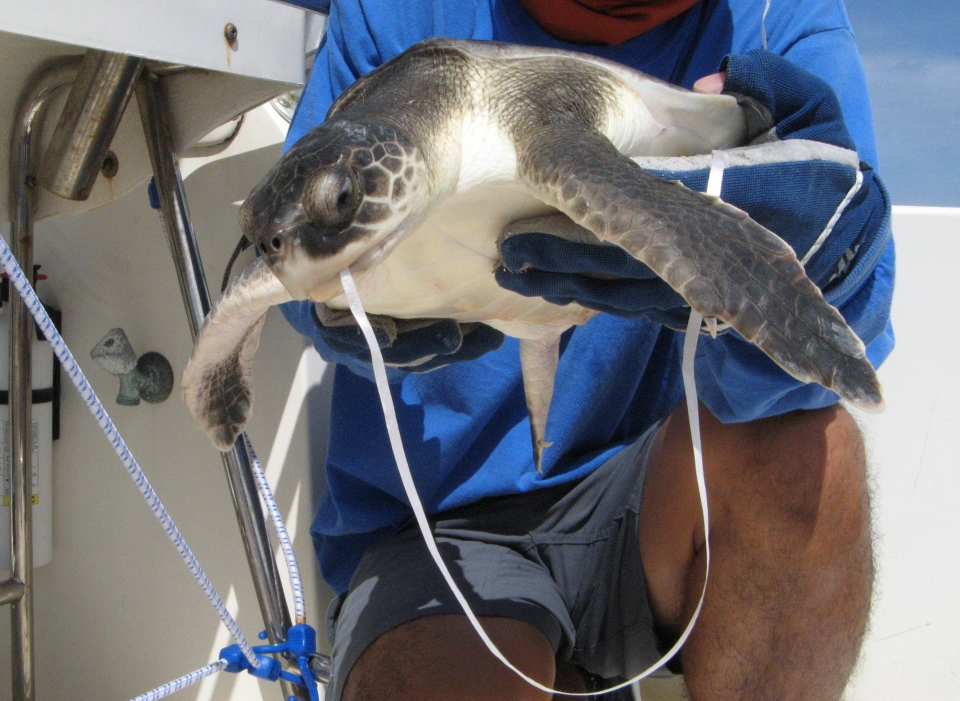 This juvenile Kemp’s ridley sea turtle was found 65 nautical miles west of Sarasota, Florida. It had ingested the latex end of a toy balloon, from which the synthetic ribbon trailed from the turtle and was wrapped around its front flippers. Photo by Blair Witherington

When Senko and his team started the analysis, they expected that they would find some studies that found population level impacts.

“This was a shocker that, you know, in the last 50 years, after sifting through thousands upon thousands of studies, not a single one was able to document that plastic caused the population decline and/or reduced population growth in any of these species.”

Senko believes that controlled studies can help shed light on the fate of marine wildlife. Studies will need to be evaluated on a case-by-case basis in terms of animal welfare, but surrogate species could potentially be used for endangered ones. These studies can control the amounts and types of plastic ingested, including chemical-laden plastic, as well as track weathering, dosage, and components of the introduced items. Researchers can concurrently track changes in feeding, weight, growth rates, and other behaviors to gain a better understanding of how marine megafauna might be affected, which can ultimately be used to infer possible population-level impacts where interaction rates with plastic pollution are well-documented or believed to be high.

“It’s not a free pass for people to use as much plastic as they want,” Senko said. “I think we should still aim to reduce it, obviously. But I think we really need to think about how we cover this problem because I fear that it draws away attention from the real threats.”

Co-author Janie Reavis said it’s possible to study the ocean without being near it.

"Working on this global review paper as an undergraduate student at ASU made me realize it’s possible to study marine species and global-scale conservation threats in a landlocked state like Arizona. It also gave me the opportunity to co-author a paper during my undergrad, which ended up being a stepping stone into my PhD project," said Reavis, a second-year PhD student in biology.

The study publishes Oct. 12 in the journal Endangered Species research.

With elegant designs, tied together with fine lines and details that pop off the surface, Mimbres pottery is some of the most beautiful art of the prehistoric Southwest. The china service at the historic El Tovar Hotel’s dining room at the Grand Canyon was in Mimbres style.It’s beloved today for the designs: antelope, fish, jackrabbits, lizards, bats, scorpions, bighorn sheep, parrots and s... Being and becoming Mimbres

With elegant designs, tied together with fine lines and details that pop off the surface, Mimbres pottery is some of the most beautiful art of the prehistoric Southwest. The china service at the historic El Tovar Hotel’s dining room at the Grand Canyon was in Mimbres style.

It’s beloved today for the designs: antelope, fish, jackrabbits, lizards, bats, scorpions, bighorn sheep, parrots and sacred figures. And that’s where most of the attention on Mimbres pottery has been focused: what’s depicted and how cool or charming it is.

But pottery and Mimbres social organization hadn’t been brought together. Academically, the pottery lived in a vacuum of its own.

Now, a new study by researchers at Arizona State University’s School of Human Evolution and Social Change highlights the meaning behind the painted designs.

“Everyone loves Mimbres pottery,” said lead author Michelle Hegmon. “It’s really easy to see; this has got a rabbit, this has got a duck, this has got some kind of sacred figure. But taking it much further than that is complicated, by all sorts of factors. … The analysis of the designs was either about artistry or some sacred meanings, and then there was the analysis of society which didn’t have much to do with pottery. … This study is a synthesis.”

The meaning of the design is not necessarily what the design depicts. You look at Impressionist art, and the meaning is not a water lily or a bridge: It’s the whole way of depicting things. Mimbres pottery is similar.

In archaeology, you’re always looking for patterns. With Mimbres, it’s tough to explain the designs because there’s nothing else in the Southwest like them.

“What we did in the study is bring together a whole series of analyses,” Hegmon said. “Some results are new and some are what archaeologists have been saying for a while.”

One fact that’s never been demonstrated is that distribution of the pottery had strict boundaries. It didn’t get traded or carried hither and yon. Inside the Mimbres area (southwestern New Mexico, near Deming, from 1000 A.D. to about 1130 A.D.), there’s almost no other styles of pottery. Outside the Mimbres area, there’s no Mimbres pottery.

“That is very unusual in the Southwest,” Hegmon said. “It’s pretty much all or nothing. Ninety-some percent on Mimbres sites and usually 5% (from) outside the region.”

“When they came into the region, they used the pottery,” she said. “When they left the region, they didn’t take much with them. It’s not a completely new idea, but ours is the first study that really showed that definitively, with a lot of quantitative data rather than an impression.”

Just about every attribute they studied, from the types of animals to the geometric designs, is distributed homogeneously through the region. “Pretty much everyone has the same suite of things,” Hegmon said.

“Why is it so beautiful, and what does it mean? The two seemed to come together.”

The Mimbres farmed and buried their dead with their pottery. It was both a way of claiming their land and how they were organized. It was an acknowledgement of a whole cultural system. The pottery was an important part of the land tenure system, which made the potters more important. In turn they made more elaborate designs.

There are some analogies to assimilation – an immigrant who moves to America starts mowing the lawn and eating hot dogs on the Fourth of July.

“What the pottery means is, in short, ‘I belong here,’” Hegmon said. “It means I’m part of this Mimbres system; I accept it. … It all comes together in a really neat package. Pottery was part of life in the Mimbres region.”

The paper was recently published in American Antiquity.

Top image: Mimbres pottery, courtesy of the collection of the School of Human Evolution and Social Change.