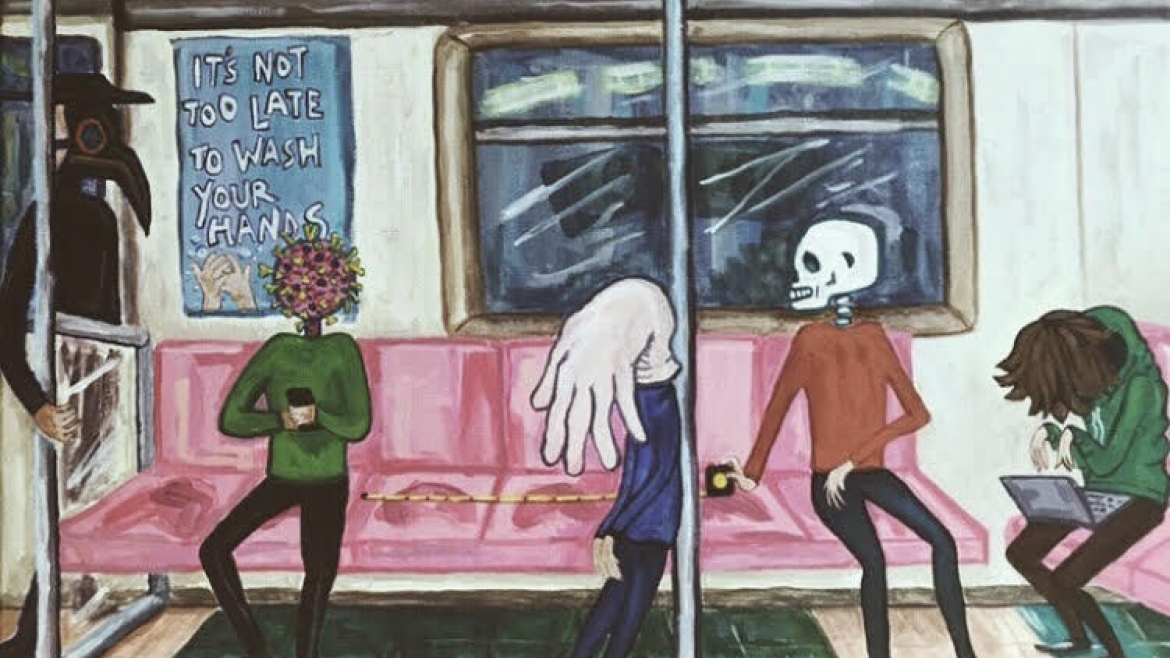 What 2020 taught us about the importance of the humanities

2020 has been a year. While the nation may feel more divided than ever, it seems we can all agree on the unprecedented nature that this calendar year has brought us. And in its unique moments, there have been lessons to learn — many that relate to how the humanities are intertwined with society’s experiences and the importance of studying human culture.

The beginning of the pandemic initiated a craving for creative outlets and virtual connections as many in the Arizona State University community and beyond faced isolation from friends and family. ASU poets were contacted as experts for the power of words and how they can heal: Associate Professor Natalie Diaz shared the poem she turns to in times of strife while Associate Professor Sally Ball discussed how words can ease isolation.

"The need for the humanities has never been more evident. Questions of social and environmental justice, understanding the long legacies of history and forging better futures are all at the heart of what the humanities undertake,” said Jeffrey Cohen, dean of the humanities in The College of Liberal Arts and Sciences. “Philosophy, literature, film and media, history, writing, religious studies, language and cultural studies; all of these disciplines are essential to comprehending how we arrived at this moment and to imagining a more just world.”

Professors from The College’s humanities division shared more insight into the lessons learned from this year.

2020 taught us: The importance of sharing our stories to connect now and in the future

When Catherine O’Donnell and Mark Tebeau, both professors in the School of Historical, Philosophical and Religious Studies, first planned to launch a digital journal documenting experiences with the COVID-19 pandemic, they initially called it “Journal of a Plague Semester.” They now chuckle at the naivete and optimism in thinking that by the fall semester, everything would be business as usual. Instead, the project was launched as “A Journal of the Plague Year: An Archive of COVID-19,” a title that still too may not quite capture the magnitude of the pandemic.

Along with the timeline of the virus, the impact of this project was also initially underestimated. The immediate idea, said O’Donnell, was to find their place and role in this unusual time and provide an outlet for their students to share their experiences.

“I understood how scientists and health care workers and all kinds of people could be helping. So what skills did we have? The skills that we have as historians are the skills needed to bear witness to human events and human suffering,” she said. “Creating an archive would be our way of contributing and the initial thinking was that our own students would be the primary creators and users of it.”

Soon after launching, the journal made the rounds across the globe and as of this fall, has collected more than 9,500 items in its archive. With funding from The College of Liberal Arts and Sciences Humanities Excellence Fund, a cohort of student workers were hired to help catalog and sort the thousands of submissions for future research. 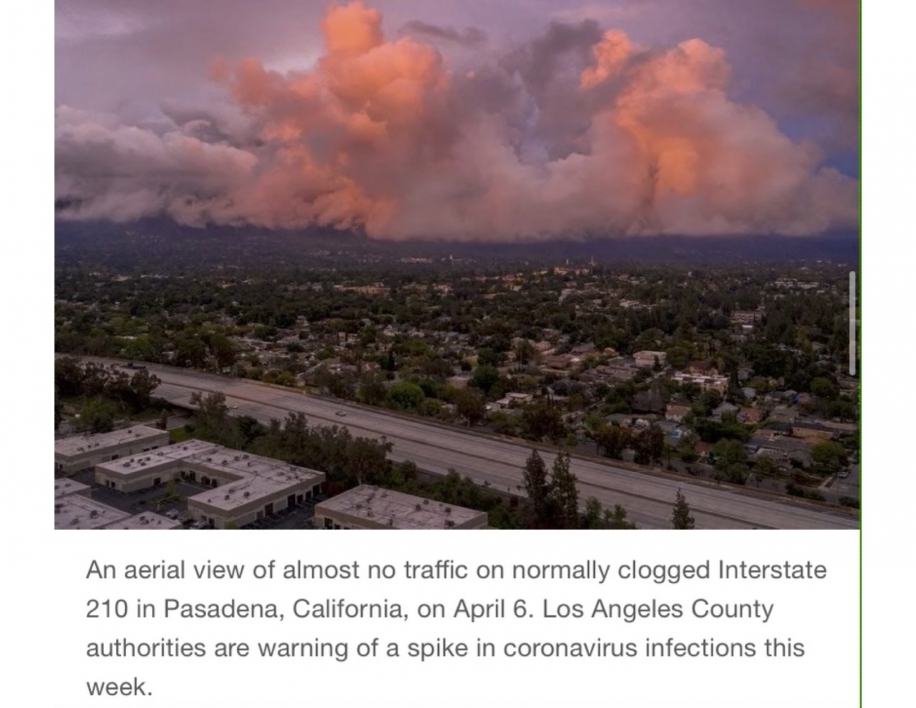 "The Reveal of True Colors Through Chaos." Source: covid-19archive.org/s/archive/item/29034 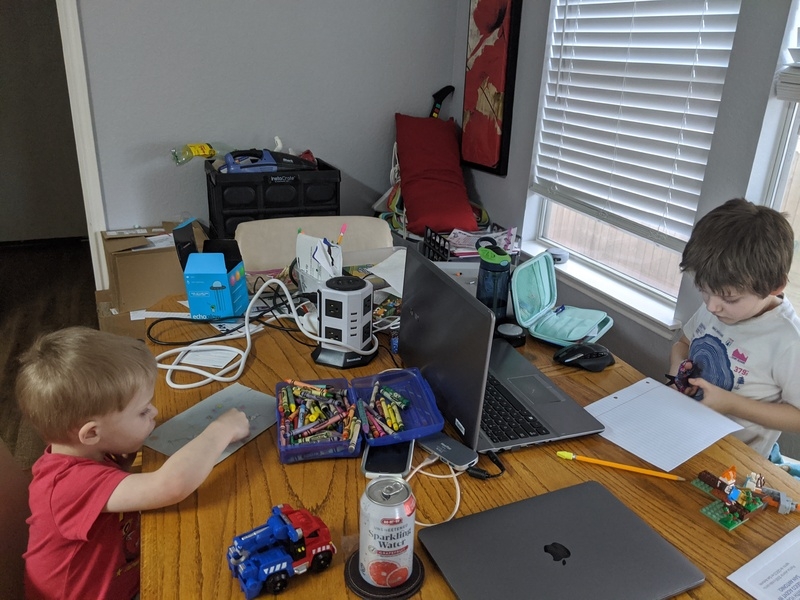 "The Challenges of Caring for Children and Working at Home." Source: covid-19archive.org/s/archive/item/28722 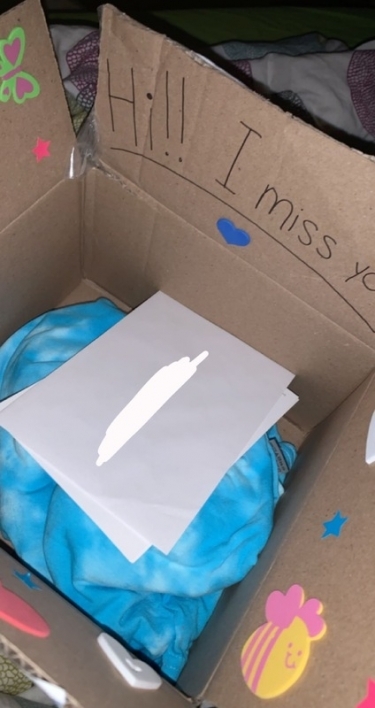 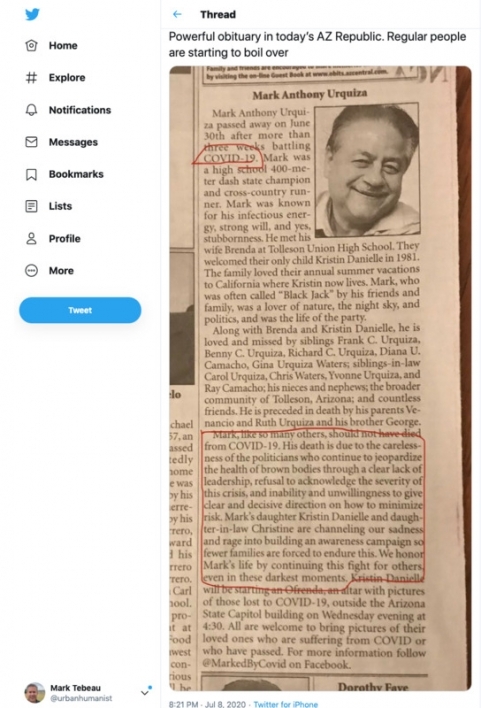 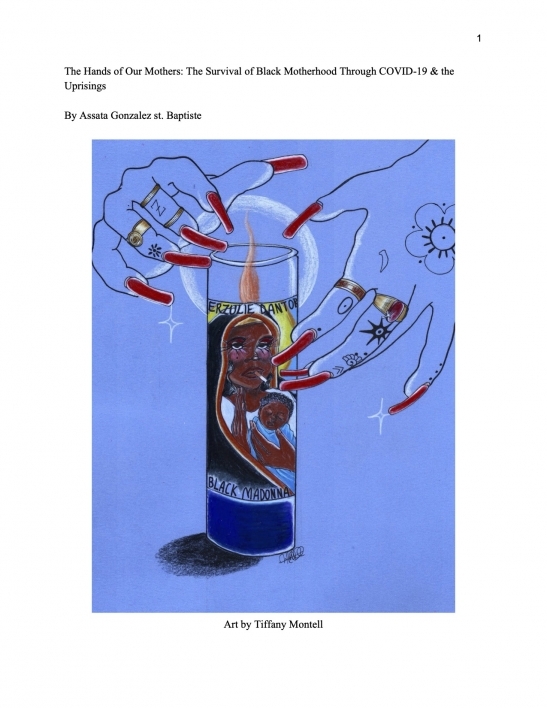 "The Hands of Our Mothers: The Survival of Black Motherhood Through COVID-19 & the Uprisings." Source: covid-19archive.org/s/archive/item/28299

“The archive is a response that attempts to make sense of (the pandemic), to organize it, to collect it, to share it with future historians,” Tebeau said. “To have our students and others describe it is a pretty powerful way to make sense of this moment. Many in our community have found solace and fellowship in the spaces of the archive.”

In a time where it seems the nation is plagued with constant division and individuals are facing new experiences with isolation and loss of normalcy, the journal is a prime example of what the humanities can do: connect and bridge understanding.

“We're basically mysteries to each other, right? Everybody is. Then the past is a mystery to the present; the present is a mystery to the future … the humanities are just trying to bridge that divide,” O’Donnell said. “We tend to talk more about bridging between cultures, but honestly, between one person and the next. The archive doesn't judge, nobody argues back against a submission. In a way, it's the opposite of today's political, very fraught, atmosphere. The purpose of it is to increase the extent to which someone is knowable to someone else. That to me is the humanities, and the archive’s purpose.”

2020 taught us: The importance of representation and understanding context

With the twin pandemics of COVID-19 and the fight for racial equality in the U.S., Ayanna Thompson said she’s never been busier in her life. As the director of the Arizona Center for Medieval and Renaissance Studies and a professor in the Department of English, she said institutions, professional organizations and journals were all reaching out for context.

“I think the humanities provides all of the contexts that people use and need to make sense of a lot of data input. We're the people who make sense of these larger narratives and stories and provide historical background,” Thompson said.

Throughout the summer, the Institute for Humanities Research and the Arizona Center for Medieval and Renaissance Studies attracted large domestic and international audiences for their events centered around race. Prior to COVID-19, similar events would get 20 to 60 people in attendance on campus, but in the new virtual format they are now seeing audiences of 150, 300 and sometimes even 500 people, Thompson said. 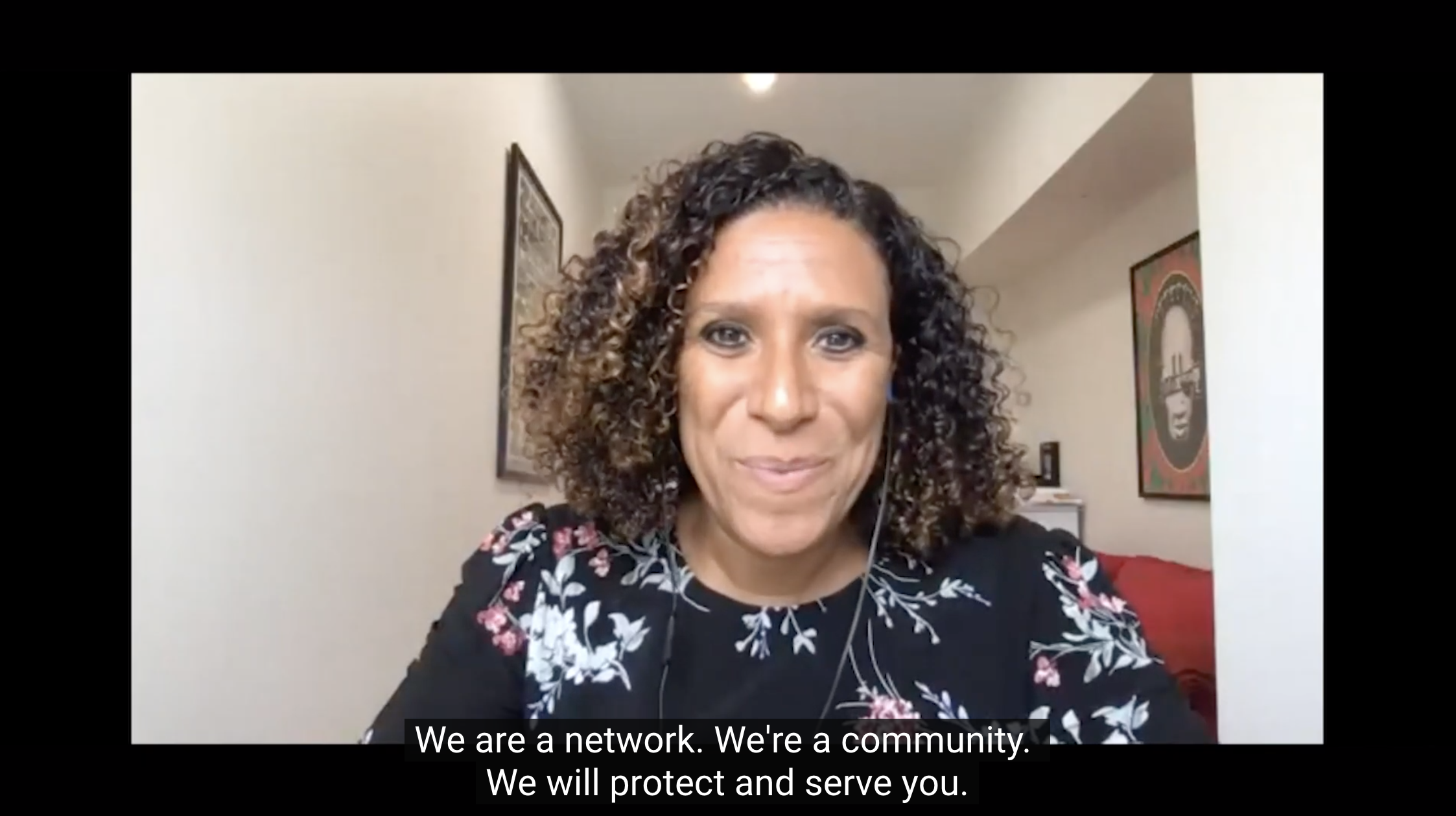 Ayanna Thompson during a digital event, “To Protect and to Serve: A RaceB4Race Roundtable.”

“There is this hunger for the context for the humanistic exploration of the big problems we're facing right now,” she said.

One of those issues many are facing is that of the power of language. In an article Thompson submitted to a journal in which she referred to a Black performer in the early 19th century as a “former slave,” she was corrected that the proper term was “enslaved person.”

“People are realizing the power of language and wanting to know how it changes,” Thompson said.

In a widely shared open letter published last June, the executive board of RaceB4Race (a conference series and professional network within the Arizona Center for Medieval and Renaissance Studies) called for an end to publishing gatekeeping. With a focus on amplifying Black, Indigenous, medieval and Renaissance scholars, and people of color, RaceB4Race noticed that cutting-edge work was being done, but it was incredibly difficult to get traditional venues to publish the research.

The flagship journal in literary studies, Publications of the Modern Language Association, initially was receptive to a pitch focused on the work of RaceB4Race, but after conferring with its editorial board, responded that contradictory opinions needed to be added as well, Thompson said.

“The essays were about anti-racist pedagogy and anti-racist practices. So at first, I was like, ‘What are they actually asking us? Are they asking us to include a white supremacist point of view?’ It was totally unclear. And it was then that I realized, ‘Oh, this is just a gatekeeping mechanism.’”

After receiving an overwhelming response from their letter, Publications of the Modern Language Association issued a response and apology, with plans to hire a new editor and revamp their submission process. Five years ago, maybe even one year ago, Thompson said she doesn’t think the open letter would have had the same effect. But the timing and context of organizations like Publications of the Modern Language Association releasing public statements in support of Black Lives Matter and anti-racist practices and then rejecting work like that of RaceB4Race helped the letter and the Arizona Center for Medieval and Renaissance Studies have a greater impact.

Beyond the world of academic research and publishing, Thompson said 2020 will be the year that showcases the importance of an education grounded in the humanities.

“I think the summer of 2020 might be the revival of the humanities because the questions that people are asking across the board are humanities questions, and they're not going to get the answers in other disciplines,” she said.

“And so they're going to keep asking the questions and if they're at ASU, they'll find the humanities because we are the place where we're going to explore: Is that the right question to ask? Have you thought about these other questions and how do you go about answering them? They’ll find all the tools that we use, and people want that right now.”

Top photo: "The Daily Commute" painting by Schuyler Workmaster submitted to “A Journal of the Plague Year: An Archive of COVID-19.”

Content Strategist and Writer , The College of Liberal Arts and Sciences

H. Christian Kim has joined the Center for the Study of Economic Liberty at Arizona State University as the associate director. In addition, Kim has been appointed associate professor in the Department of Marketing at the W. P. Carey School of Business.

“We are thrilled to have Christian join the Center,” said Ross Emmett, director of the Center for the Study of Economic Liberty. “He will launch a research program on the connection between economic liberty and people's appreciation for economic and social mobility. He is also interested in enlarging the center's Doing Business North America profile among business and economics researchers.” 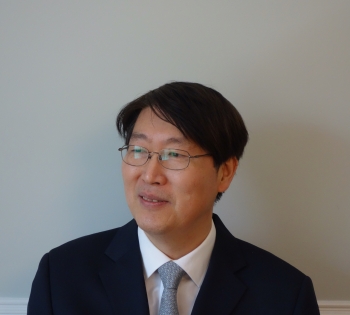 Kim will assist the center director with developing other projects that strengthen the relationship between the center's programs and business and economics education and scholarship.

Kim’s research interests include issues surrounding self-control, materialism, branding, social perception and behavioral pricing self-control. He examines issues in these areas using lab and field experiments as well as survey instruments. Among his research topics, economic mobility and materialism are pertinent to the center.

“Increased economic mobility is assumed to be a consequence of economic freedom, but there is little evidence to support the causal relationship,” Kim said. “Having been trained in behavioral science, I am interested in investigating how issues surrounding economic mobility and materialism affect human behavior and well-being in order to provide theoretical and managerial implications. This will help further the impact of the CSEL's research enterprise.”

Outside the university, Kim enjoys playing various musical instruments, reading books on the world wars and physics, and hiking, with the Bernese Alps and the Mont Blanc Massif being his favorite hiking destinations.