ASU professor studies how and why prevention programs work

Among high school students in the United States, cigarette smoking is down over 20% compared to the mid-1990s. Alcohol abuse and illegal drug use are also declining.

To prevent and treat substance abuse problems, scientists have to understand how and why they occur. Because there is more than one way to connect risk factors to substance use, scientists often have to take an indirect path that considers variables like parenting style or peer influences. 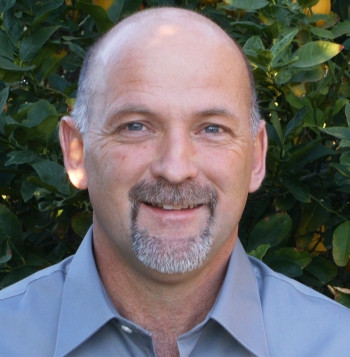 “Most research looks at the relationship between two variables – like risk taking and substance use – but there can be a lot happening in between, and those ‘third variables’ can cause the outcome,” said David MacKinnon, Foundation Professor of psychology at Arizona State University.

When a third variable transmits the effect of one variable to another, it is called mediation. Measuring the effects of third variables with mediation is a commonly used statistical method in biology, sociology, medicine and psychology.

Beginning in the late 1980s, MacKinnon started using and improving mediation analyses to better understand how drug prevention programs work. This type of research can uncover why some programs work for certain kids but not others. Mediation is now one of the most powerful tools used by scientists who develop interventions to prevent social, mental health, physical and academic problems.

An indirect – but causal – pathway

Forty years ago, school-based programs were the most effective option to prevent drug use, especially for cigarette smoking. Understanding how the programs kept children from smoking required measuring how the program changed third variables. MacKinnon and his collaborators considered third variables like how tolerant the school environment was of drug use and whether smoking was considered socially acceptable by peers.

“We knew the program worked, but I wanted to understand how,” MacKinnon said. “Mediation analysis lets researchers extract more information from the data, and this information lets us know how things work and how to make programs more powerful, efficient and shorter.” 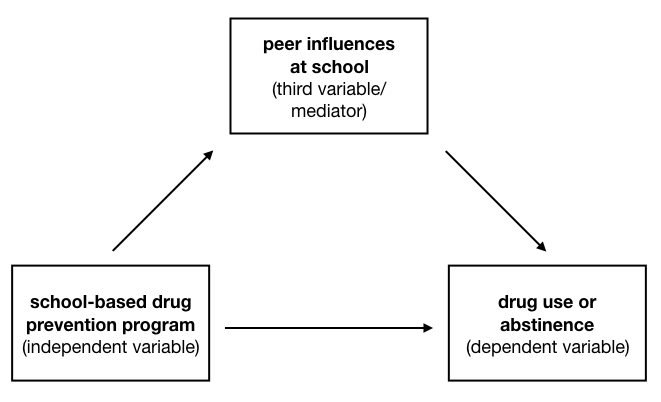 From professional hockey player to professor

MacKinnon’s path to bringing mediation to the field of prevention science includes attending Harvard University as a first-generation college student and a stopover in Spain, where he played a season of professional hockey for Futbol Club Barcelona after graduating.

While home from college, MacKinnon worked at a summer camp for children with mental health disorders and at an institute that served children with autism. Those experiences led him to quantitative psychology, combining his love of math and wanting to help people.

When MacKinnon suggested using mediation to understand how and for whom prevention programs work, he had recently earned his doctorate from the University of California, Los Angeles and was working at the University of Southern California Institute for Prevention. He joined the ASU Department of Psychology as a professor soon after, founding the Research in Prevention Lab. So far, MacKinnon’s work on mediation has led to nearly 200 publications and a Method to Extend Research in Time (MERIT) award from the National Institutes of Health, an honor given to only the handful of research programs that receive the highest possible rating. Since 2014, MacKinnon has twice been named in the top 1% of researchers based on the number of times his publications have been cited by others.

MacKinnon is a founding member of the Society for Prevention Research, which promotes research into the causes and prevention of social, mental health, physical and academic problems. Many, if not all, of the society members use mediation in their research.

Training students to be team players

Despite the widespread impact of his research, MacKinnon says without hesitation that what he is most proud of in his career is the success of his students.

In 2007, he won ASU’s Outstanding Mentor Award. One of the commenters for the award was JeeWon Cheong, who graduated with her doctorate in psychology from ASU in 2002 and is now a professor of psychology at the University of Florida.

“When I started working in his lab as a research assistant, I was a shy international student whose English was not fluent at all. Dave was extremely kind and patient. He always emphasized the positive, focusing on what I did well, while turning the negative into opportunities to handle the challenges in research,” Cheong said.

Another student, Oscar Gonzalez, said MacKinnon trained all his students to have a sense of independence while being a team player and insisting that their research should have a purpose, like helping prevention scientists.

“Dave MacKinnon saved my career. At the end of my first year of graduate school in 2014 my dear mentor and adviser Roger Millsap died, and Dave was immensely supportive and promptly invited me to join his lab,” said Gonzalez, who graduated with his doctorate in psychology from ASU in 2018 and is now an assistant professor of psychology at the University of North Carolina. “Dave’s excitement about work and science is contagious and is probably why I decided to follow a similar path. I’m now in my second year as a tenure-track assistant professor, and my admiration for Dave has grown exponentially now that I am on the other side of the desk.”

MacKinnon’s former students now work as professors at universities across the world, as data scientists in health care, in county and state departments of public health and the nonprofit sector.

For the third year, the ASU Alumni Association offered complimentary ASU-themed, back-to-school packs for Sun Devil educators who teach pre–K to college. This year, the association kicked off the school year by mailing 3,541 of these packs to teachers who reside in 49 states, two U.S. territories and three countries.“It has been wonderful to see the positive responses we’ve received from ou...

Teachers from across the country receive ASU-themed packs from Alumni Association, share their thoughts

For the third year, the ASU Alumni Association offered complimentary ASU-themed, back-to-school packs for Sun Devil educators who teach pre–K to college. This year, the association kicked off the school year by mailing 3,541 of these packs to teachers who reside in 49 states, two U.S. territories and three countries.

“It has been wonderful to see the positive responses we’ve received from our alumni educators,” said Christine K. Wilkinson, president and CEO of the association. “Sun Devil teachers are on the front lines inspiring the next generation of lifelong learners and the association is delighted to see that the complimentary materials and resources we’ve provided for them, their virtual and in-person classrooms, and their students have brought them joy and Sun Devil spirit.” 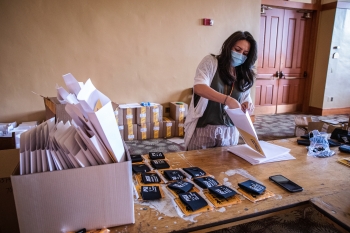 During the process to request a back-to-school pack the association asked teachers to answer a few questions. Here are a few of the answers from the thousands of responses received.

Question: What inspired you to become a teacher?

“I wanted to help parents of a second language, specifically the Hispanic community. I want them to be able to be a part of their child’s education. Being bilingual allows me to help them through the process.”
– Jennifer Roman, Phoenix

“A student was struggling with math when I was substitute teaching and I explained the math to him and he started crying because nobody had ever been that patient with him.”
– Beth Anderson, Phoenix

“My former educators who guided me as a young scholar through my troubling childhood inspired me. They had faith in me when I didn’t and they pushed me through success and college. When I graduated from ASU, they were all still there. Therefore, I became an educator because I knew I wanted to be just like them, inspire kids and be there for them.”
– Crystal Alulema, Phoenix

“Wanting to help at-risk students believe in themselves and reach their goals.”
– Marcus Washington, Wilsonville, Oregon

Question: During these unprecedented times, what is your silver-lining story from the past six months?

“The beginning of this year is the first time I've ever seen kids desperate to be at school and learn. My students were SO excited for our year to start that they smiled their way through every Google Meet! When something we've always taken for granted (being at school together) was stripped away, my students learned to relish every learning opportunity we have now.”
– Bethany Tarzwell, Tempe, Arizona

“With distance learning, it has been difficult for many students, but I have had quite a few students rise up and become even stronger students than before. Without the added peer pressure around all the time, they’ve been able to focus and do more than previously.”
– Stephanie Esquivel, Phoenix

“As a high school teacher, it was very inspiring to see how all students pulled together through this tough time. I saw students hosting their own proms in their backyards and communities coming together to get creative to support the graduates. My colleagues and I came together to make yearbooks for our students, mailed cards and pictures, and drove to their homes to drop off a sweet surprise. I saw parades of teachers driving through neighborhoods to surprise their students. It made me proud to be in a profession with people who realize that even when things are hard, it's all about the kids and what we can do for them.”
– Alexandra Allen, Gilbert, Arizona

Question: Who inspired you and how do you use that to inspire your students?

“My mom is my everyday inspiration and she is the reason I fight to make sure my students are heard. As an English language learner in school, my mom struggled to find someone who cared enough to help her succeed. I want to be the one that my students know will always support and help them reach their goals.”
– Elizabeth Carpio, Queen Creek, Arizona

“Children that I have worked with throughout the years continue to be my greatest blessing and constant inspiration to learn, grow and be the best special educator and advocate.”
– Whitney Hawkins, Waynesville, North Carolina

“My own students inspire me. They have shown true resilience in the last semester of school. They worked very hard despite the difficulties the pandemic had put them through and they never gave up.”
– Alexa Ferrer, Mesa, Arizona

“My 6th grade teacher showed me extra attention when I really needed it — when others dismissed what I was going through. This reminds me that if a kid is acting out of not caring, there may be a reason and they might just need to know that someone cares.”
– Kristina Peterson, Mesa, Arizona