Staying connected with others is more critical now than ever

COVID-19 really shook everything up, didn’t it? One day we’re climbing up that career ladder, then the next, due to no fault of our own, this pandemic pushed us into a land of masks and physical distancing.

Gone, for now, are the days of in-person networking events and happy hours. That doesn’t mean we should give up on networking. Opportunity is everywhere, even if we have to look harder for it.

The most important thing to do during this time is to breathe and keep moving forward. And that means making time to stay connected with people you’re not necessarily able to see in person.

To network in these times:

We have all done it. You add someone on LinkedIn and then never do anything with that new connection. Instead, create a goal to increase your LinkedIn presence. For example, comment on every new job/promotion announcement and every happy birthday notice you receive. Message a certain number of your contacts to check in and see how they/their companies are adjusting to the current times.

They may be awkward at first, but why not give it a shot? Many universities, including ASU, are taking alumni events virtual. Industry organizations are doing happy hours and trivia nights. Can’t find one that interests you? Then start your own. Reach out to an industry group you are part of and offer to arrange an event.

3. Make a meaningful connection with someone you admire/want to learn from.

Been looking for a good time to set up an informational interview but didn’t want to interrupt the person’s busy schedule? Have you always been trying to get an interview with an industry leader but never followed through? Now is your time. With the pressure off of in-person meetings, people are more open than ever to having virtual interactions. Request a simple Zoom meeting, offer to send an Etsy box so you are doing some kind of activity together, or finally propose that interview.

If we have learned anything from COVID-19 it is: There are always alternatives and we can adapt. The virtual world has expanded beyond social media; it is now the way we do business.

Our personal and professional lives have moved online. With that transition comes a greater opportunity to find the virtual connections for your next great opportunity. Try an unconventional networking method and see how it goes.

Then do it again, and again, and again. Who knows where you will be in six months if you work on growing and fostering your professional network? There’s only one way to find out.

Good luck out there. We will get through this; and you may even end up a bit ahead.

Written by Taylor Drake, ’09 BA in film, who leads marketing for a major litigation support firm in Los Angeles. At age 30, she co-founded Bluestocking Society, an online networking community for female professionals. Find out more at bluestockingsociety.co.

Professor Rebekka Wachter has spent nearly 20 years in Arizona State University's School of Molecular Sciences as an expert in the field of structural and functional characterization of proteins and as a mentor and inspiration to many students and colleagues.Her team has been interested in understanding how a protein’s three-dimensional structure, dynamic motions and self-assembly guide its bio...

Professor Rebekka Wachter has spent nearly 20 years in Arizona State University's School of Molecular Sciences as an expert in the field of structural and functional characterization of proteins and as a mentor and inspiration to many students and colleagues.

Her team has been interested in understanding how a protein’s three-dimensional structure, dynamic motions and self-assembly guide its biological function. Wachter, a faculty member in the Center for Bioenergy and Photosynthesis and more recently the Biodesign Institute for Applied Structural Discovery retired last month after an impactful career encompassing two major fields.

The first involves the carbon-fixing activity of the most abundant enzyme in nature, Rubisco, which carries out the vast majority of carbon dioxide fixation reactions on Earth and is therefore extensively regulated.

The second has been inspired by Wachter’s expertise in the field of structural characterization of green fluorescent protein (GFP)-like proteins.

Green fluorescent protein was first isolated from the jellyfish Aequorea victoria, which drifts with the currents off the west coast of North America. It was discovered that this protein glowed bright green under ultraviolet light. This phenomenon has found many creative applications in the biosciences.

“Rebekka has had an extremely productive career at ASU, her work on the structure and function of fluorescent proteins, and chemo- and mechanical proteins was world class. She was a sought-after collaborator in the school and her creativity and insight will be sorely missed. Along with her students, past and present, and her colleagues, I wish her well in her next adventure in life,” said Ian Gould, interim director of the School of Molecular Sciences.

Wachter attended high school in Munich, Germany, where her parents were both visual artists. In fact her father was an extremely well-known sculptor.

In high school Wachter loved biochemistry but started studying philosophy as an undergraduate in Munich because to quote her, “I thought biochemistry would be way too hard!”

Then her life took an unexpected turn and she moved to Santa Cruz, California, having married a young American. They started a family whilst Wachter started taking science classes at a junior college. Her love of biochemistry eventually won the day and she completed her BA in biochemistry and molecular biology from the University of California Santa Cruz in 1986. Wachter began work first as an analytical chemist, then as a biochemist in the pharmaceutical industry, where she was part of a team developing a lung surfactant replacement therapy.

Her passion for biochemistry led her to complete a PhD in 1996 awarded by the University of Oregon, Department of Chemistry and Institute of Molecular Biology. Wachter then continued as a postdoctoral research associate from 1996 to 2001 in the Department of Physics and Institute of Molecular Biology also at the University of Oregon.

In August 2001, when both her children were off to college, Wachter joined ASU as an assistant professor in what was then the Department of Chemistry and Biochemistry. This was approximately one year before President Michael M. Crow took the reins at ASU, when it was a far cry from the top research university that it is today.

At that time there was only one other female faculty member, Professor Ana Moore, in the department. Wachter has since enjoyed fruitful collaborations with a number of female colleagues who subsequently joined ASU.

During her tenure at ASU Wachter was continuously funded by the National Science Foundation, Department of Energy and the National Institutes of Health. Her group’s research findings have been published in many high impact journals. Her undergraduate, master's and doctoral students, postdoctoral researchers as well as collaborators are too many to mention individually but some of their photos appear in the slide show below. 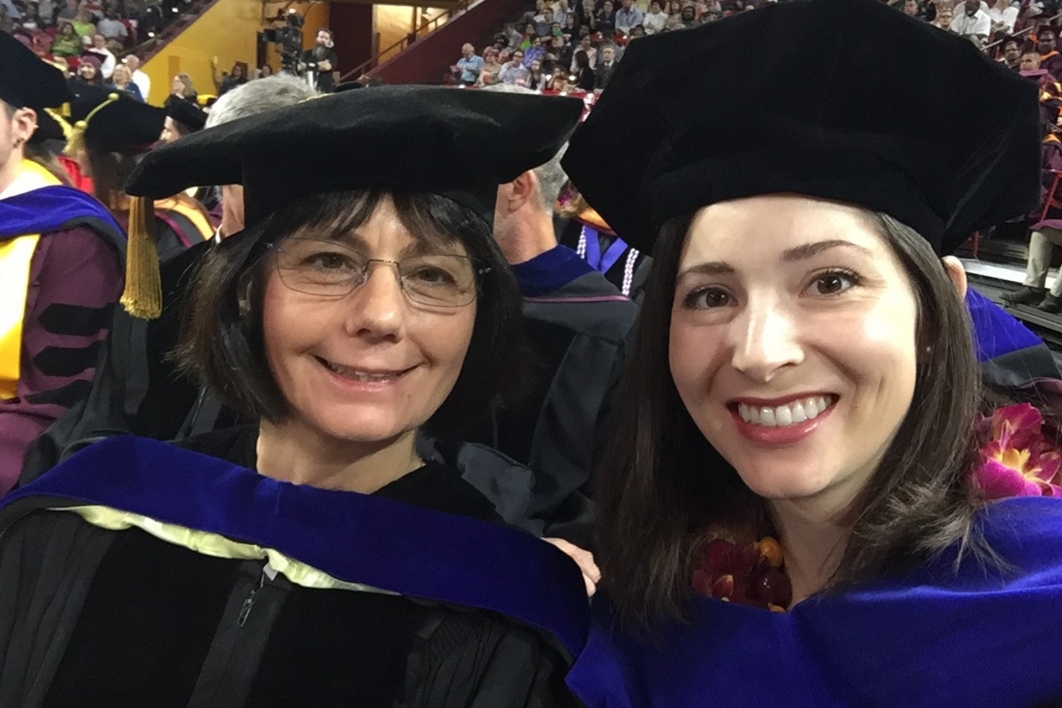 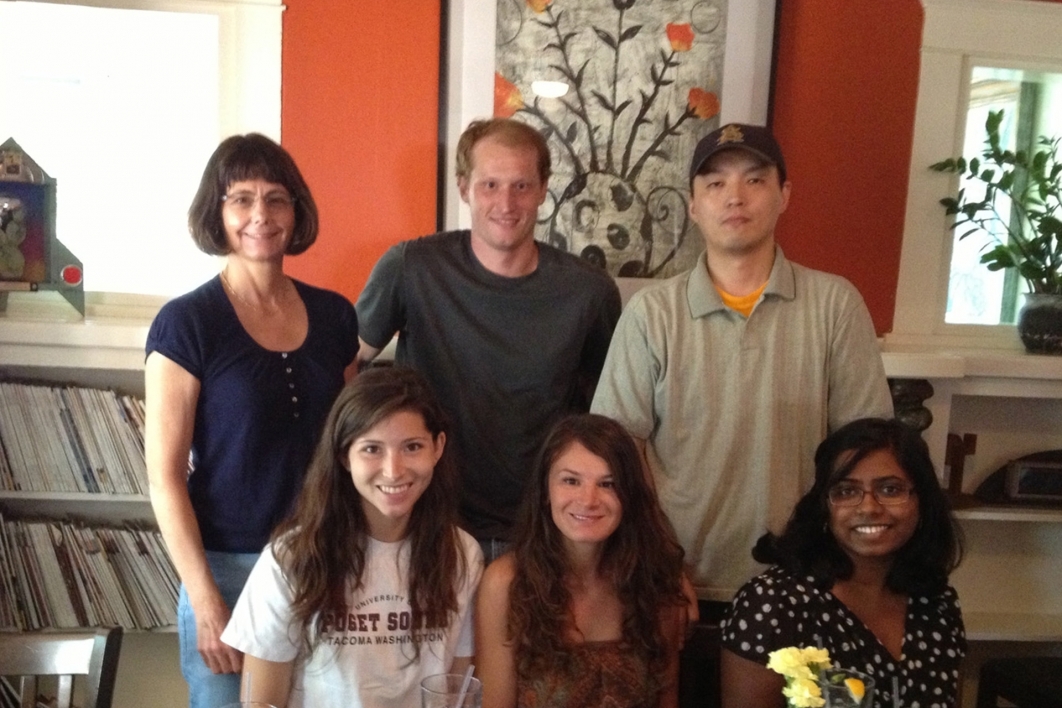 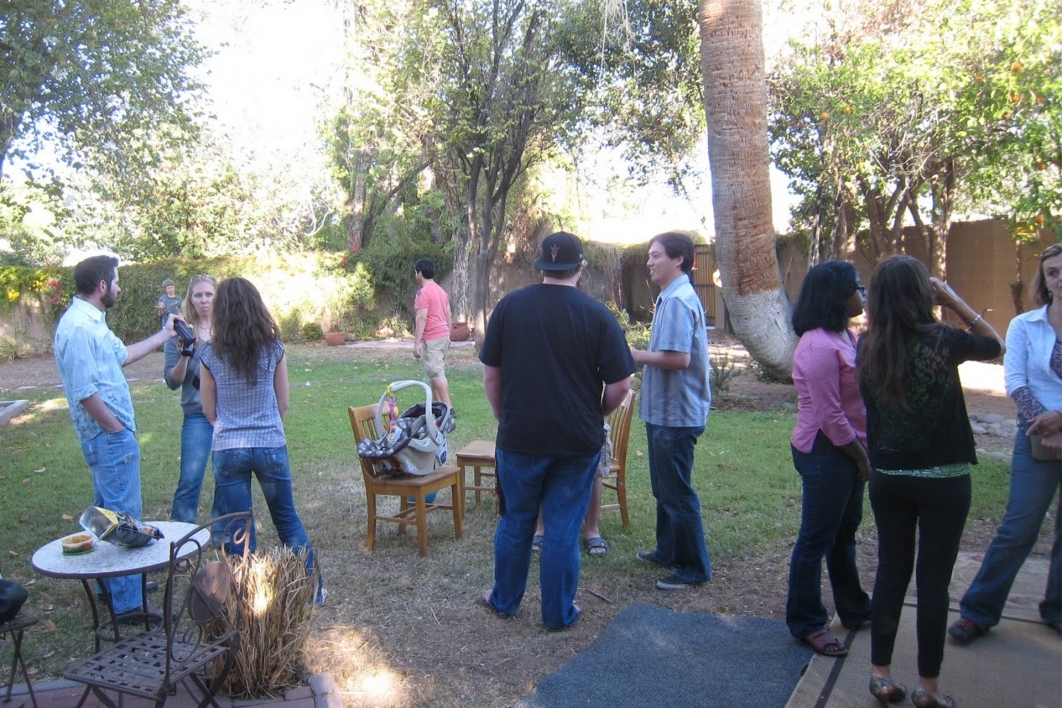 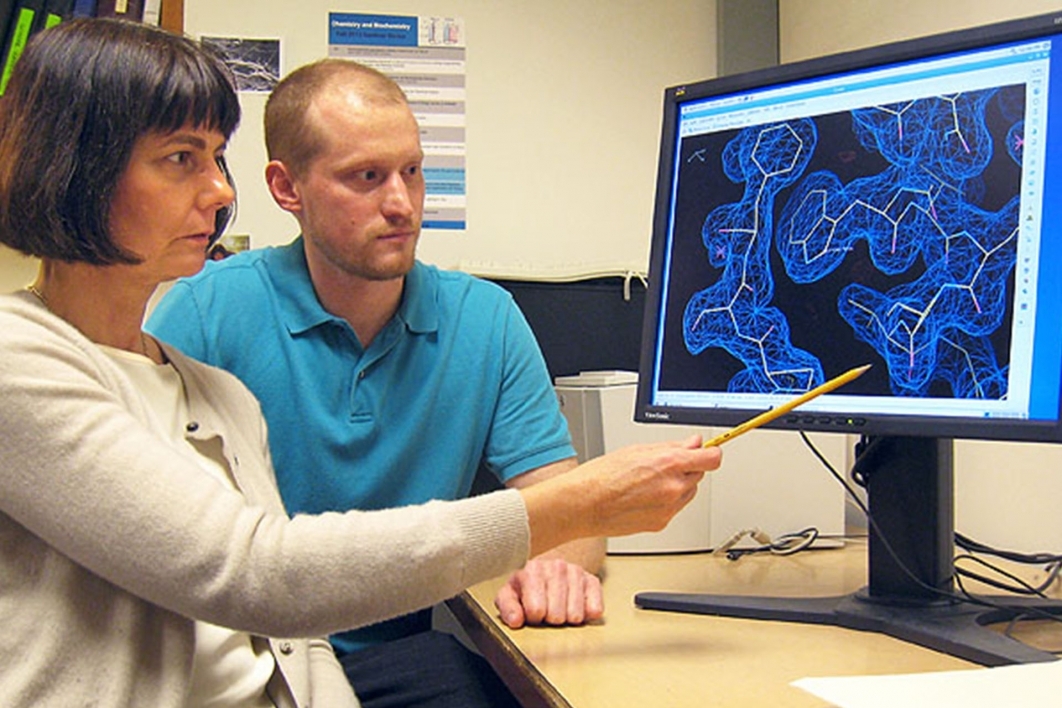 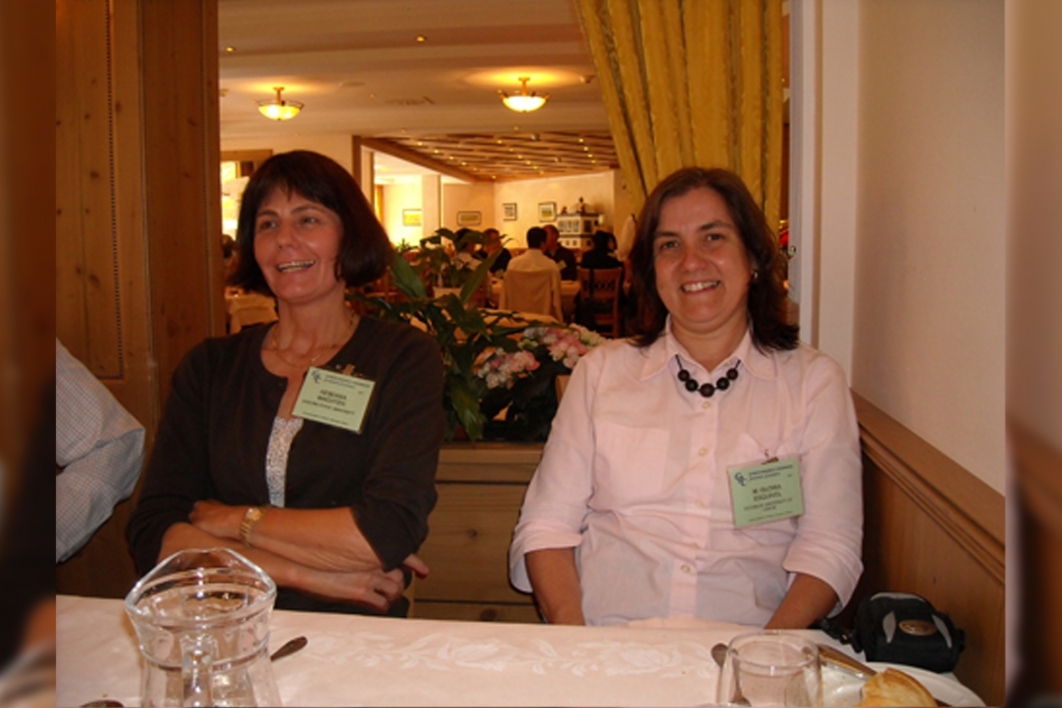 Rebekka Wachter (left) at a Gordon Conference with Gloria Esquivel in 2011. From left to right: Hoang Bui, Andrew Serban and Isabella Breen in the lab in 2018.

Wachter’s investigations of the enzyme Rubisco activase (Rca) have helped lay the foundation for efforts in metabolic engineering of photosynthesis. Rca works in concert with Rubisco (mentioned above), and under high irradiance, Rca provides continuous support of Rubisco activity. In fact, without this activity, higher plants (e.g. crops) would perish. Under rapidly changing light conditions, Rca assists in balancing the light and dark reactions of photosynthesis. 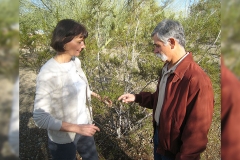 Wachter, Michael Salvucci (USDA) and Associate Professor Marcia Levitus, also from the School of Molecular Sciences, have been collaborating on this project for many years, with several co-authored, highly-rated publications to their credit. Some years ago, Wachter and Salvucci published the first crystallographic paper on Rca. Subsequently, Wachter and Levitus uncovered the catalytic role of Rca subunit assembly, a regulatory mechanism that has remained enigmatic for many years.

Wachter’s research on GFPs has addressed questions of light capture and energy conversion in fluorescent proteins. This work has led to a more profound understanding of color acquisition by GFPs, laying the foundation for protein engineering and design efforts employed all over the world. Using green-to-red photoconvertible GFPs as a model system, her team has uncovered a direct experimental link between phenotypic change and collective protein motions. 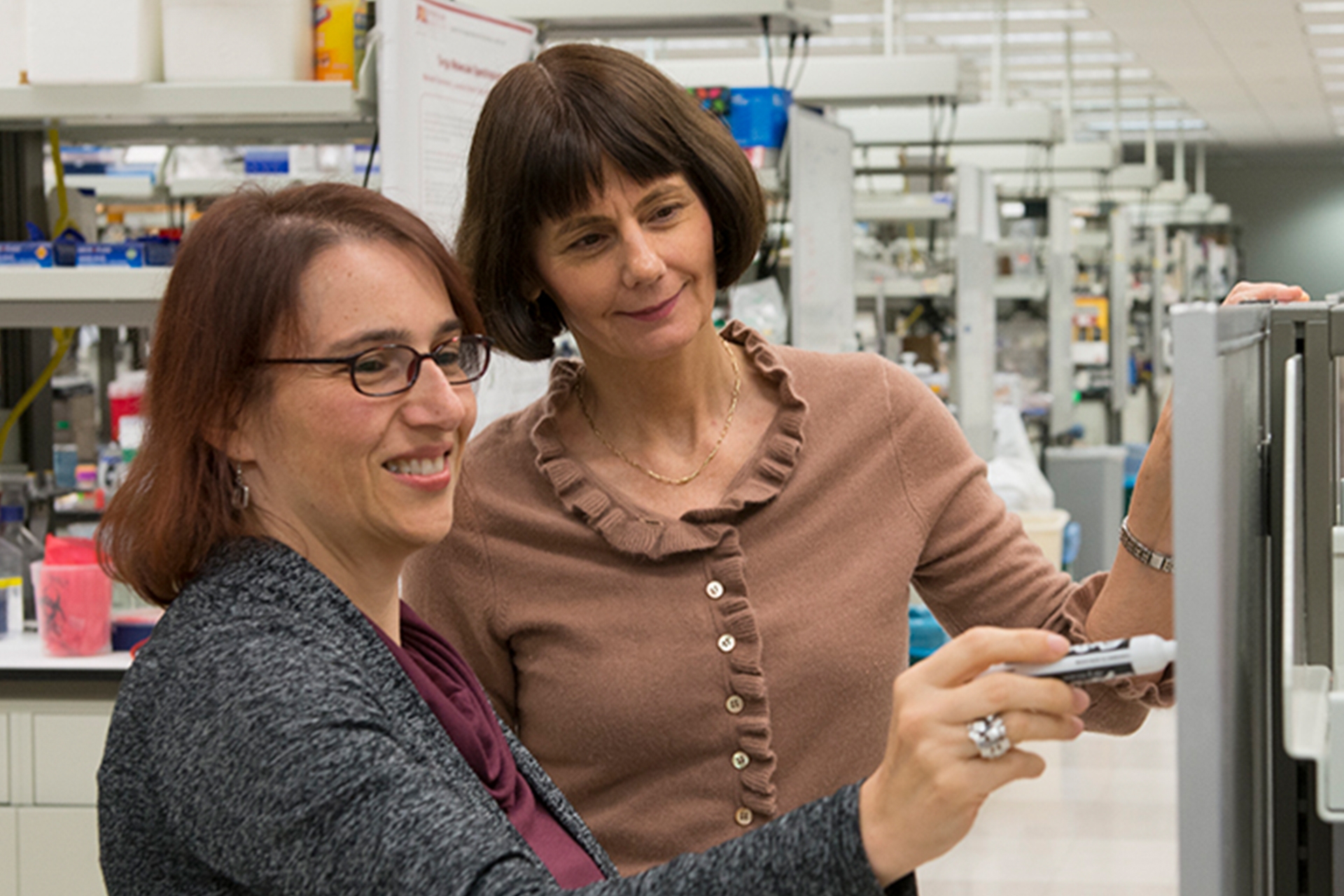 Rebekka Wachter (right) with Associate Professor Marcia Levitus from the School of Molecular Science in 2018.

In collaboration with S. Banu Ozkan, a physics professor at ASU, they have described a novel evolutionary process which involves the relocation of a rigid anchoring region diagonally across the globular protein fold. This result has provided the basis for proposing a plausible step-by-step mechanism for photoconversion, a process that has remained largely enigmatic for many years. Based on earlier work, Wachter also holds a couple of patents on GFP with Roger Y. Tsien, a UC San Diego 2008 Nobel laureate in chemistry.