Amy Hillman, dean and Charles J. Robel Dean’s Chair of Arizona State University's W. P. Carey School of Business, has been selected as a Strategic Management Society fellow. She will be officially inducted at the society's virtual 40th annual conference at the end of October.

The title honors a scholar’s theoretical and practical contributions to the strategic management field. To be inducted, a nominee must receive at least 60% in-favor votes from a membership committee of their peers. 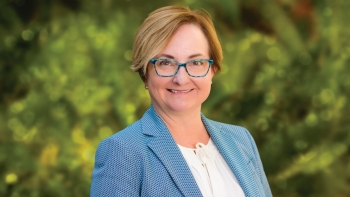 “It is an honor to be selected as an SMS fellow among so many of my brilliant peers,” Hillman said. “I look forward to the continued opportunity to share my research and the great work we do at the W. P. Carey School of Business with strategy scholars across the country and world.”

Robert E. Page Jr., an emeritus provost of Arizona State University and University of California Davis alumnus and an internationally acclaimed honeybee geneticist, author, researcher and leader in higher education, released in August his latest work, "The Art of the Honeybee: Shaping the Environment from Landscapes to Societies" (Oxford University Press, 2020).He is most widely known for his res...

Robert E. Page Jr., an emeritus provost of Arizona State University and University of California Davis alumnus and an internationally acclaimed honeybee geneticist, author, researcher and leader in higher education, released in August his latest work, "The Art of the Honeybee: Shaping the Environment from Landscapes to Societies" (Oxford University Press, 2020).

He is most widely known for his research on honeybee behavior and genetics, particularly the evolution of complex social behavior. One of his most striking contributions to science was to construct the first genomic map of the honeybee, which sparked a variety of pioneering contributions to social insect biology and to genetics at large. 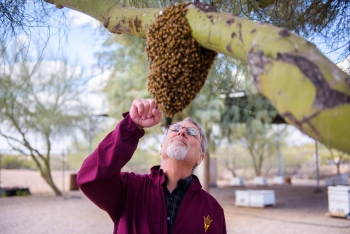 He is also known for his research into the genetic and physiological mechanisms that underlie the honeybee’s remarkable system of social organization, particularly their division of labor.

In addition to his many remarkable research contributions to science, Page has had an indelible impact on STEM education at Arizona State University.

Page received his doctorate in entomology from UC Davis and joined the faculty there, serving as the chair of the Department of Entomology.

In 2004, Page was recruited by ASU as the director of the School of Life Sciences. He organized three departments — biology, microbiology and plant sciences, comprising more than 600 faculty, graduate students, postdoctoral fellows and staff — into one unified school.

“It was a great challenge to go in and build a whole new concept,” Page shared in an interview with UC Davis Magazine.

As the School of Life Sciences founding director, he established the school as a platform for discovery in the biomedical, genomic, evolutionary and environmental sciences.

Page went on to serve as dean of the School of Life Sciences, vice provost and dean of The College of Liberal Arts and Sciences, and university provost, bringing his inimitable talent for employing modern and innovative strategies to long-standing systems.

“When I was dean of The College and university provost, I worked with a group of faculty who wanted to change the way that science is taught to nonscience majors and future teachers. We promoted the building of general studies science courses that were based on themes rather than the entry levels of all of the disciplines,” Page said.

“When I decided to write this book, I wanted it to be different, not built like a traditional text, based on excavatable layers of accumulated knowledge, or structured around levels of biological organization but on central, interesting themes that would weave in all of the different aspects of biology, ecology, genetics, behavior, etc.,” he said.

“I wanted each chapter to stand alone and for each to bring primary scientific information. At the end of the book, hopefully, a reader will have the whole set of information normally gleaned from a textbook on honeybee biology, but presented in a more interesting way.”

The book probes deep into the evolutionary history and social structure of bees, exploring the fascinating ways in which human societies and bee colonies are similar, and examining the role of bees as engineers and architects of our environment.