Arizona State University Music Theatre and Opera, in collaboration with musical theater writers Rachel Dean and David Brush, released the official cast album for “The Anxiety Project.” The new musical is a 90-minute themed production based on anonymous true stories of people who experience anxiety or depression.

"The Anxiety Project: Original Cast Album," released on YouTube, features 21 show tracks plus a bonus Dean-Brush song, "Something to Leave Behind," performed by ASU alumna and Broadway tour performer Caelan Creaser. The recording will soon be available on over 150 streaming platforms including Apple Music, Spotify, Google Play and Amazon Music. 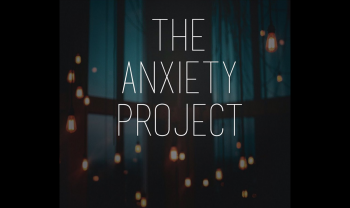 “The Anxiety Project” is a 90-minute themed production based on anonymous true stories of people who experience anxiety or depression. It is the first full-length musical recorded at ASU involving ASU students. Download Full Image

“I'm thrilled with how well the students did making a recording — a new experience for nearly all of us — and they sound terrific,” said Brian DeMaris, artistic director for music theater and opera and associate professor in the School of Music, Dance and Theatre. “I think people will love hearing the music, and the subject offers opportunities for learning and healing, especially during challenging times.”

Following three years of developmental workshops and concerts, a staged reading at the New York Film Academy (2017) under the direction of Robert Schneider, the musical direction of Kevin David Thomas, and development in Tokyo and Akron, Ohio, the show received further development at ASU.

The musical follows psychology student Avery, who is in her final semester of undergraduate studies and in just a few short weeks will earn her degree and be one step closer to the ultimate goal of opening her own practice. That's assuming she finishes her thesis — a study of the mechanics of mental illness and how science can change lives. Case after case, Avery becomes immersed in the lives of these patients — the day-to-day struggles of anxiety, depression, suicide, medication. But when one of the cases hits very close to home, Avery realizes that numbers only tell part of the story of mental illness.

The musical became an official selection of the Phoenix Theatre Company’s Festival of New American Theatre in 2018, and festival organizer Robert Harper, associate artistic director for the Phoenix Theatre Company and faculty associate with the School of Music, Dance and Theatre, identified the musical as a piece that would be excellent for students to workshop at ASU and perform at the festival. 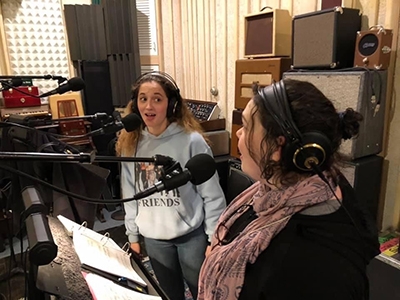 Hahnna Christianson and Nellie Shuford in the recording studio.

“Our first association with ASU's incredible program was via the Phoenix Theatre Company's Festival of New American Theatre,” said Brush, lyricist and librettist. “For us, the timing was ideal — it was exactly what we as artists needed and exactly what the show needed at this developmental phase.”

The students also performed the musical that year as part of ASU Music Theatre and Opera’s new works initiative, which exposes students to the creative process of new work development. Students participated in several developmental workshops for the piece.

“Any new work brings its own challenges, but specific to ‘The Anxiety Project’ was the weight of the work we were doing,” said Kathryn Leonard, director for “The Anxiety Project” workshops and production manager for Music Theatre and Opera. “Mental health is such an important subject to explore, and submerging myself and our cast into that world was challenging but necessary to make sure these stories were told in the most honest and respectful way possible.”

Dean said the professionally produced cast recording will present a musical understanding of the show's potential and impact on audiences to potential producers, directors and companies that will hopefully lead to a fully realized production.

“New work development is incredibly important for the future of our art form,” Leonard said. “Ideally, our students will have the opportunity in their careers to originate roles, and learning to do that in the safe space of their college is so beneficial. Our students are able to help shape their characters and inform revisions to the scripts, which helps develop collaboration, critical thinking and creativity.”

“The Anxiety Project” album was recorded at Tempest Recording in Tempe in January 2020, with editing and mastering before the pandemic. The album was produced by ASU Music Theatre and Opera, made possible in part by research funding from the Herberger Institute for Design and the Arts.

Who should have a say on editing DNA?

Designer babies, mutant mosquitoes and frankenfoods: These are the images that often spring to mind when people think of genome editing.The practice, which alters an organism’s DNA in ways that could be inherited by subsequent generations, has implications so profound that a growing group of experts believe it is too important a matter to be left only to scientists, doctors and politicians.In th...

Creating a climate for fiction writing

Who should have a say on editing DNA?

Designer babies, mutant mosquitoes and frankenfoods: These are the images that often spring to mind when people think of genome editing.

The practice, which alters an organism’s DNA in ways that could be inherited by subsequent generations, has implications so profound that a growing group of experts believe it is too important a matter to be left only to scientists, doctors and politicians.

In the journal Science, 25 leading researchers from across the globe, including Consortium for Science, Policy, and Outcomes Associate Director Mahmud Farooque at Arizona State University, are calling for the creation of national and global “citizens’ assemblies,” made up of laypeople, tasked with considering the societal implications of this emerging science. The potentials for genome editing are immense. On the one hand, it could prevent or cure genetic conditions such as sickle cell anemia, cystic fibrosis and even some forms of cancer. On the other, it could create new, treatment-resistant illnesses or cause inequalities with designer babies engineered for superstrength or intelligence.

Researchers — including Professor John Dryzek, head of Australia’s Centre for Deliberative Democracy and Global Governance at the University of Canberra — believe these implications are so important that they should be examined not just by those in the field, but by the general public.

“The promise, perils and pitfalls of this emerging technology are so profound that the implications of how and why it is practised should not be left to experts,” Dryzek said.

The sentiments connect well with decades-long CSPO scholarship and practice with respect to the governance of emerging technologies. Amidst the vacuum left by the demise of the U.S. Congressional Office of Technology Assessment in 2010, CSPO joined the Museum of Science, SciStarter, the Loka Institute and the Science, Technology and Innovation Program at the Woodrow Wilson International Center for Scholars to launch the Expert and Citizen Assessment of Science and Technology (ECAST) network to bring citizen voices into science and technology decision-making.

To assist global citizen deliberations on gene editing, CSPO is working on a series of three closely connected projects. In partnership with the Kettering Foundation, CSPO is developing an issue guide by conducting focus group deliberations at the local community level. These open-framed focus groups will allow participants to share their hopes and concerns and direct the conversation on their terms. The resulting issue guide will be used for community-based, deliberative conversations about human genome editing.

The issue guide will also help inform the design of a series of large-scale, national public deliberations on human genome editing, which CSPO will co-design with the Museum of Science. These deliberations are funded through a three-year grant from the National Institutes of Health awarded to Christopher T. Scott, the Dalton Tomlin Chair of Medical Ethics and Health Policy at the Center for Medical Ethics and Health Policy at Baylor College of Medicine, and Cynthia Selin, associate professor in the School for the Future of Innovation in Society and the School of Sustainability at Arizona State University. The aim is to develop forward-looking, democratically derived, and ethically reflective processes useful in preparing for possible futures related to human genome editing.

The U.S. deliberations will inform and lead into a Global Citizens Assembly on Genome Editing scheduled for early 2022. This assembly will bring together a minimum of 100 participants from different countries for multiday deliberations on the global governance of genome editing.

It will be the beginning of a “more inclusive, effective and integrated global citizen deliberation that will inform the broader public as much as experts and decision-makers,” said Farooque, leader of the U.S. public engagement efforts and clinical associate professor at the School for the Future of Innovation in Society within Arizona State University’s College of Global Futures.

“These forums will provide a unique opportunity for us to build an anticipatory and participatory multilayered governance framework for gene editing in particular and other socially disruptive innovations in general, early in the process when the ‘should we’ and ‘we should not' options are still on the table,” he added.