Traffic is a hassle. Everyday drivers endure the tedium of gridlock induced by road construction or accidents at intersections. Hence the hope for a future driven by autonomous vehicles. We anticipate intelligent transportation systems delivering smooth movement, improved safety as well as a broad range of economic and environmental benefits.

“Of course, the transition is not going to be sudden,” said Aviral Shrivastava, a professor of computer science in the Ira A. Fulton Schools of Engineering at Arizona State University. “For an extended period of time, we will have both autonomous and human-driven cars. So, it’s essential that we develop traffic management systems to accommodate very complex interactions. This is especially true for intersections.” 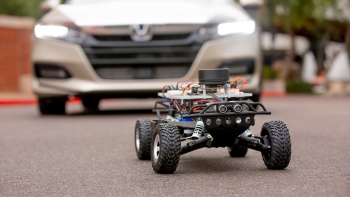 Road network research focuses on intersections because over half of all traffic injuries or fatalities happen at intersections or near them, according to the Federal Highway Administration. As a consequence, more than 120 recent studies related to autonomous vehicles investigate how to maintain fluid transit through intersections.

Shrivastava explains that the overall process involves a computer known as an intersection manager or IM. As each car approaches an intersection, it contacts the IM to say something like, “I’m at this spot right now, moving at this speed and I want to go straight or turn left through your intersection.”

The IM then makes a reservation for this car to arrive at the intersection at a specific time, going at a specific speed and crossing by a prescribed route, all while making sure it won’t collide with any previously scheduled cars approaching the same area.

After receiving the data points of its reservation, the inbound vehicle determines an optimal trajectory for getting to the intersection and lets the IM know what it plans to do. This plan is essentially a position-versus-time graph that specifies where the car should be at any point in time.

The approaching vehicle then follows its planned trajectory to the intersection and continues through it as instructed. But what if things don’t go as planned?

“We have algorithms that allow cars to cross intersections efficiently and without stopping,” Shrivastava said. “But how realistic are they? If we want to implement intersection management systems in the real world, they need to be very robust against several kinds of failures.”

Imagine that an IM gives detailed instructions to an approaching car, but that car doesn’t follow the plan. Maybe it needs to take evasive action to avoid a collision before it arrives at the intersection. Or maybe it has a sensor problem that means it misreports its speed or its location.

“Independent of the reason, it just does what it does, and it’s not what is expected,” Shrivastava said. “We need a system that is robust enough to get cars safely through intersections even when faced with these uncertainties. So, that is what we have created.”

Shrivastava and his team at the Fulton Schools’ Make Programming Simple Lab have developed an algorithm to deal with situations in which any car can start accelerating or braking at any point in time relative to transiting an intersection. Their innovative research has been selected for presentation in September at the 2020 Intelligent Transportation Systems Conference of the Institute of Electrical and Electronics Engineers.

The work is conceptually different from previous research, which created IM algorithms that function only in ideal settings. The ASU algorithm — R2IM, which stands for robust and resilient intersection management — reflects the real world because it allows cars to do arbitrary things and still maintains the safety of all vehicles involved.

“Our approach uses a surveillance system, such as cameras mounted at an intersection, that can detect if a vehicle is not following its expected trajectory beyond a tolerance limit,” said Mohammad Khayatian, who is the lead author of the study and a doctoral student in Shrivastava’s lab at the School of Computing, Informatics, and Decision Systems Engineering, one of the six Fulton Schools

“If that’s the case,” he said, “the intersection manager declares that vehicle as ‘rogue.’”

The IM then alerts all approaching cars about a possible emergency, and they react accordingly. Even so, safety is already guaranteed through the scheduling of crossing times for all approaching vehicles. There are enough built-in buffers that an accident becomes impossible even if a vehicle goes rogue at any point in time. 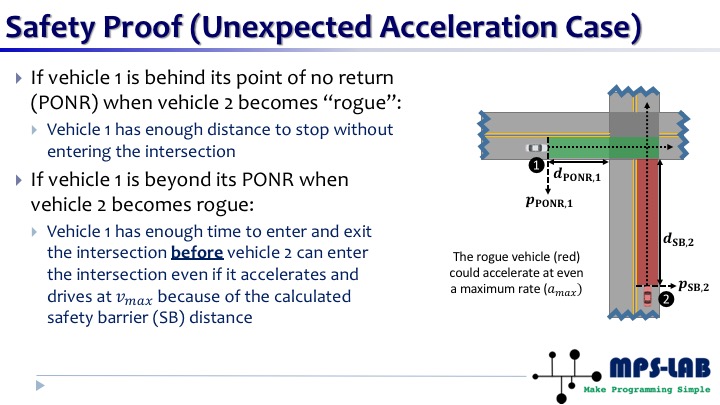 The R2IM algorithm precludes collisions by operating with times and distances that enable safe intersection crossings even when autonomous vehicles behave unexpectedly. Image courtesy of MPS-LAB

The MPS Lab team has evaluated the function of the R2IM algorithm by building a 1/10 scale model intersection and injecting faults into small electric autonomous vehicles that navigate through this scene. The faults force cars to unexpectedly accelerate or decelerate on the track and thereby enable the IM to demonstrate that it will not compromise the safety of any vehicles.

“We then checked the scalability of our approach for a real intersection through computer simulation with variable traffic patterns,” Khayatian said. “In total, 500 faults were injected during 20 hours of traffic, out of which 110 faults could have caused an accident. Even so, all collisions were avoided.”

Finally, Shrivastava’s team confirmed that the algorithm enables the IM to recover the intersection’s normal operations after a rogue vehicle leaves or has been removed from the area once the emergency situation is resolved.

“I see this effort as a first step to getting intelligent intersection management systems deployed in real life,” Khayatian said. “The next round of research is focused not just on intersections. It moves toward a complete solution for autonomous driving systems, incorporating cooperative lane changing, highway merging and more.”

Shrivastava says the Phoenix metro area has become an important hub of autonomous car research. There are now more than 10 companies in the region engaged in autonomous vehicle development.

“Government here is receptive to, and supportive of, this field of innovation,” he said. “Also, we have great infrastructure for this work with straight roads, new signage and lighter traffic than many other urban centers. Finally, there is the weather. It’s almost always sunny, so the technology doesn’t face challenges from rain, snow or fog. As a whole, the Phoenix area is an ideal operational domain for autonomous vehicle testing.”

Shrivastava says these systems are large and complex, so they are difficult to program. Consequently, the focus of their work is making this programming easier. The benefits that these systems promise become possible only when the programming becomes manageable.

On April 25, 1954, Bell Labs announced its latest invention, a silicon solar cell, at a press conference in Murray Hill, New Jersey. A hush fell over the audience during a demonstration of the nation’s first solar panel, used to power a toy Ferris wheel and a radio transmitter.The breakthrough made national media headlines, with The New York Times reporting that the silicon solar cell “may ma... 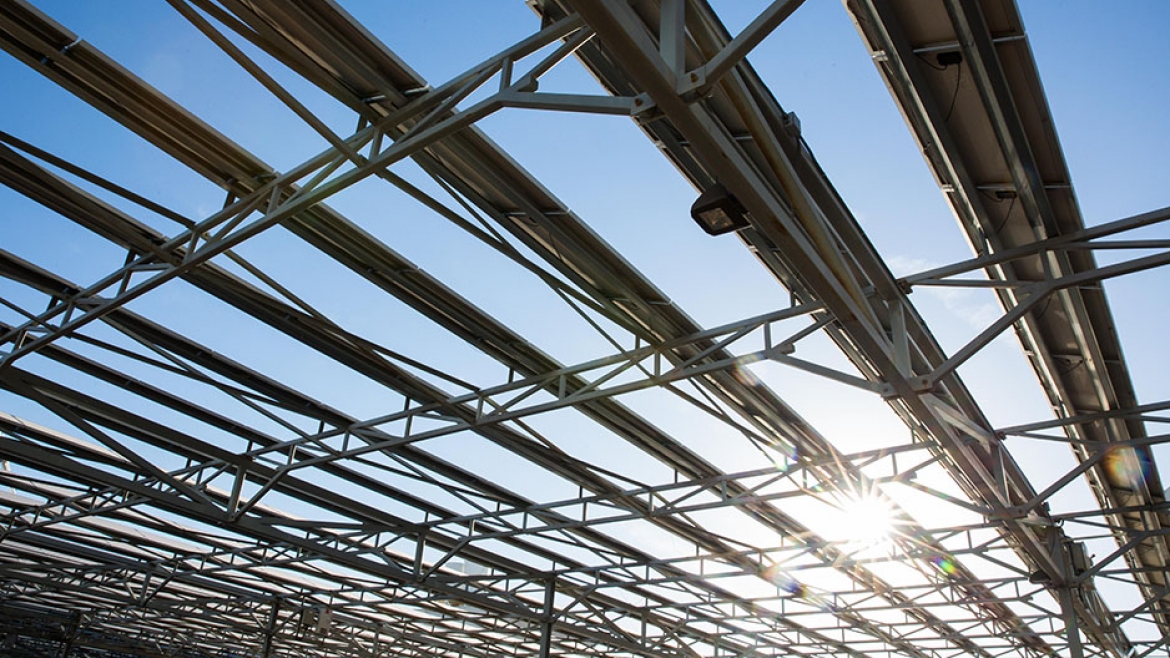 On April 25, 1954, Bell Labs announced its latest invention, a silicon solar cell, at a press conference in Murray Hill, New Jersey. A hush fell over the audience during a demonstration of the nation’s first solar panel, used to power a toy Ferris wheel and a radio transmitter.

The breakthrough made national media headlines, with The New York Times reporting that the silicon solar cell “may mark the beginning of a new era, leading eventually to the realization of one of mankind’s most cherished dreams — the harnessing of the almost limitless energy of the sun for the uses of civilization.”

With an average of 300 sunny days per year, the Valley of the Sun proved to be the ideal location for advancing solar-powered energy.

Here, we chronicle some of the major milestones in the history of solar energy development at ASU, revealing how the university has emerged as a national leader in the field.

All photos from ASU Archive 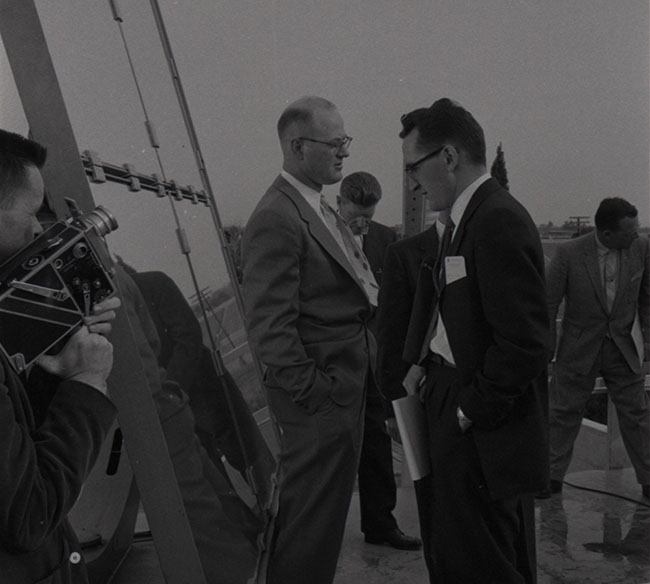 The World Symposium on Applied Solar Energy features presentations by an international cast of thought leaders in an event that draws 130 delegates from 36 countries and spotlights solar’s issues and applications. The event is co-sponsored by the Association for Applied Solar Energy headquartered at ASU. 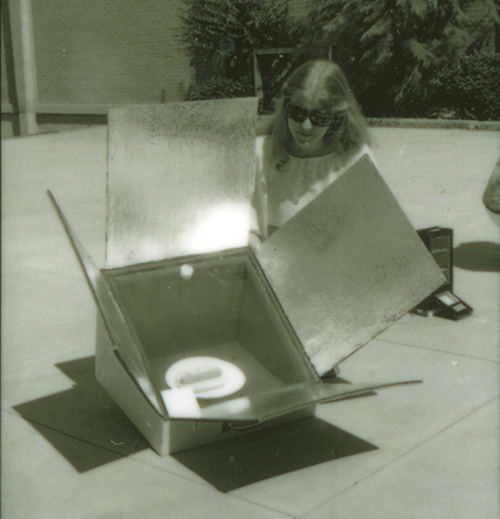 ASU’s Hayden Library houses one of the largest solar energy library collections in the country since 1972, including one-of-a-kind reference materials published by the International Solar Energy Society.

Preparing the next generation of solar energy professionals 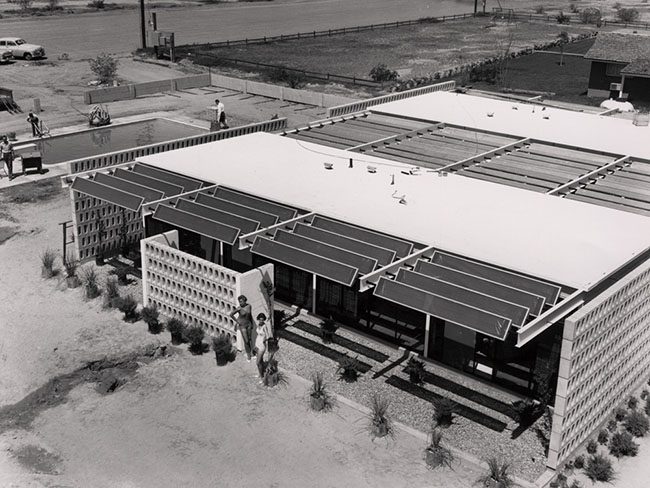 ASU’s College of Architecture leads the nation as the first program to offer a master’s degree focused on solar applications. 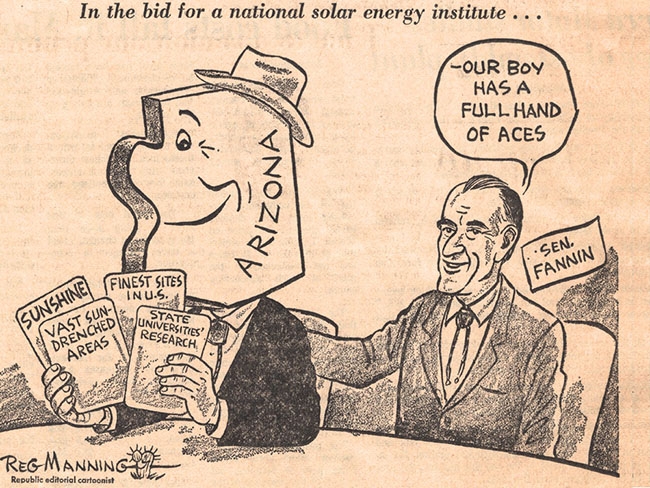 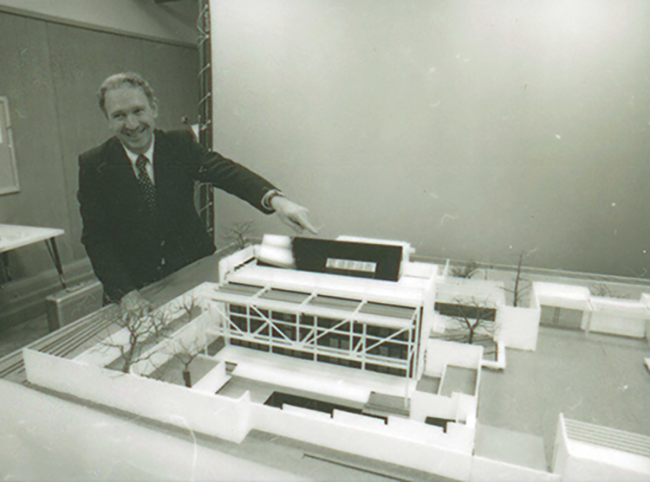 The university launches a facility that demonstrates active and passive solar energy conservation features and serves as a research center for scientists conducting solar strategies testing. 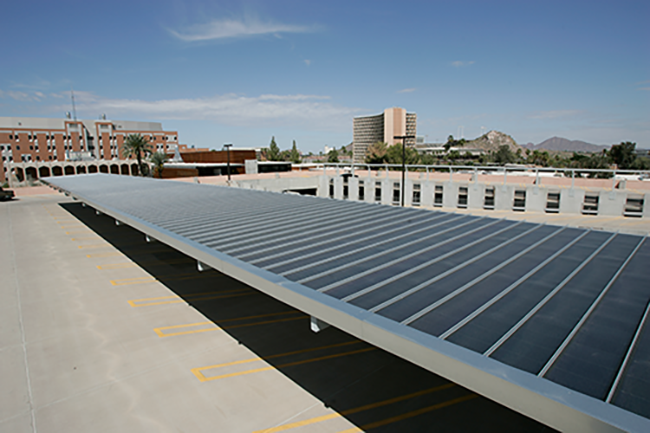 Setting the state standard for generating solar and other renewable energy

Arizona Corporation Commissioner and ASU Professor Kristin Mayes helps co-author the Arizona Renewable Energy Standard and Tariff (REST), which requires utilities to generate 15% of their overall energy portfolio from renewable sources such as solar, wind, biomass, biogas and geothermal by 2025.

The Arizona Renewable Energy Standard and Tariff generated approximately $2 billion in economic benefits in the state through energy and water savings, reduced carbon emissions, decreased technology costs and increased renewable energy investment between 2008-18, according to an estimate by California-based consulting firm Strategen.

TUV Rheinland Group joins forces with ASU to create TUV Rheinland PTL, the most comprehensive, sophisticated, state-of-the-art facility for testing and certification of solar energy equipment in the world. The powerful duo combines the stellar reputation, technological sophistication, management expertise and international reach of TUV Rheinland — a global leader in independent testing and assessment services — with ASU’s more than 50 years of research on solar energy and extensive solar testing abilities. 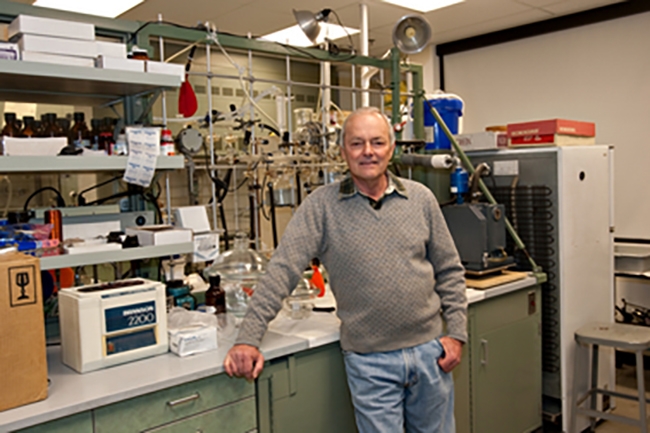 Sponsored by the U.S. Department of Energy, the ASU center pursues advanced scientific research on solar energy conversion based on the principles of photosynthesis. The goal is to accelerate scientific advances needed to build a 21st-century energy economy. 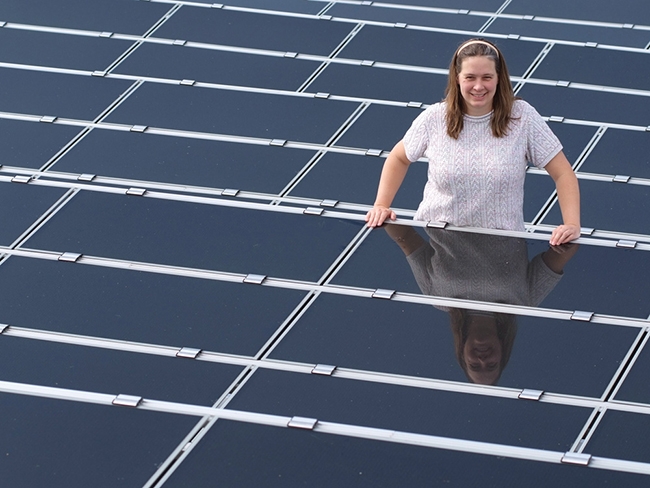 ASU expands its solar capacity by installing a 77-kWdc system on the roof of the Walter Cronkite School of Journalism and Mass Communication building and 322 solar panels on the ASU West campus.

Commanding the lead in solar energy In 2017, QESST creates three new student- and alumni-based spinout companies (bringing the total to eight), one of which set a NREL-certified solar cell efficiency record. ASU’s solar patent portfolio expands from 18 to 22 provisional or full patents, while QESST alumni work as scientists, engineers and policymakers in 54 different technology firms, national labs and other energy related fields. 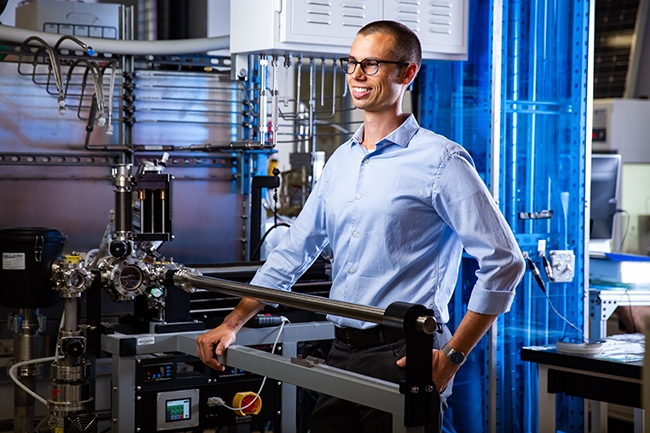 Assistant Professor Zachary Holman and Assistant Research Professor Zhengshan “Jason” Yu in ASU’s Ira A. Fulton Schools of Engineering set a world record of 23.6% efficiency for a tandem solar cell stacked with perovskite and silicon in 2017. The number was a few percentage points shy of the theoretical efficiency limit for silicon solar cells alone.

A year later, the team improves upon the record by nearly two percentage points, to 25.4%, in a joint project with researchers at the University of Nebraska – Lincoln. The team predicts they’ll be nearing 30% tandem efficiency within a few years.

Holman and members of his team discover how a microscopic alteration to industry-standard silicon wafers permits a significant enhancement to solar cell composition. The change can boost the efficiency of solar panels and lower the cost of energy production. The team’s findings are published in the science journal Joule.