Scientists at Arizona State University and the Southwest Research Institute (SwRI) have identified stellar phosphorus as a probable marker in narrowing the search for life in the cosmos and have developed techniques to identify stars likely to host exoplanets, based on the composition of stars known to have planets. They recently published their findings in Astrophysical Journal Letters.

“When searching for exoplanets and trying to see whether they are habitable, it’s important that a planet be alive with active cycles like volcanoes and plate tectonics,” said lead author and SwRI planetary astrophysicist and ASU alumna Natalie Hinkel. 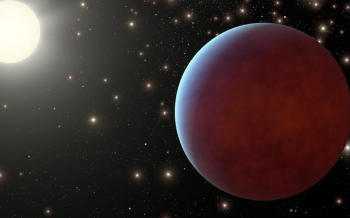 Scientists have identified stellar phosphorus as a probable marker in narrowing the search for life in the cosmos. Stars with phosphorus levels similar to the sun are considered more likely to host rocky planets with the potential to host life as we know it. Image credit: NASA/JPL-Caltech Download Full Image

Determining the elemental ratios for exoplanetary ecosystems is not yet possible, but it’s generally assumed that planets have compositions similar to those of their host stars. Scientists can measure the abundance of elements in a star spectroscopically, studying how light interacts with the elements in a star’s upper layers. Using these data, scientists can infer what a star’s orbiting planets are made of, using stellar composition as a proxy for the planet composition.

“The relative proportions of other elements produced and spread by supernova explosions have significant variations between stars,” said co-author and astrophysicist Patrick Young, an associate professor at ASU’s School of Earth and Space Exploration. “We should expect a range of phosphorus abundances that could have a big impact on the habitability of planets in different stellar systems.”

On Earth, the key elements for biology are carbon, hydrogen, nitrogen, oxygen, phosphorus and sulfur, or “CHNOPS.” In today’s oceans, phosphorus is considered the ultimate limiting nutrient for life as it’s the least available chemical necessary for biochemical reactions.

“Phosphorus is vital for all life on Earth,” said co-author and biogeochemist Hilairy Hartnett, a professor at ASU’s School of Earth and Space Exploration and School of Molecular Sciences. “It is essential for the creation of DNA, cell membranes, bones and teeth in people and animals, and even the sea’s microbiome of plankton.”

Hinkel and her team used the Hypatia Catalog, a publicly available stellar database that Hinkel developed, to assess and compare the carbon, nitrogen, silicon and phosphorus abundance ratios of nearby stars with those in average marine plankton, the Earth's crust, as well as bulk silicate on Earth and Mars. The variation in the phosphorous content of stars, planets and life is quite large; understanding the causes of that variation requires this close collaboration among astrophysicists and geoscientists and biologists.

“But there’s so little phosphorus stellar abundance data,” Hinkel said. “Phosphorus data exists for only about 1% of stars. That makes it really difficult to figure out any clear trends in between the stars, let alone the role of phosphorus in the evolution of an exoplanet.”

It’s not that the stars are necessarily lacking phosphorus, but it’s difficult to measure the element because it’s detected in a region of the light spectrum not typically observed: at the edge of the optical (or visible) wavelengths of light and infrared light. Most spectroscopic studies are not tuned to find elements in that narrow range.

“Our sun has relatively high phosphorus and Earth biology requires a small, but noticeable, amount of phosphorus,” Hinkel continued. “So, on rocky planets that form around host stars with less phosphorus, it’s likely that phosphorus will be unavailable for potential life on that planet's surface. Therefore, we urge the stellar abundance community to make phosphorus observations a priority in future studies and telescope designs.”

The authors propose that upcoming studies target stellar phosphorus to find systems with the greatest probability for hosting life as we know it. Moving forward, these findings could revolutionize target star selections for future research and clinch the role elements play in exoplanet detection, formation and habitability.

This story was written by Deb Schmid of the Southwest Research Institute with contributions by Karin Valentine, marketing and media relations manager at ASU’s School of Earth and Space Exploration.

Sun Devil Football in the NFL: Week One Update

Checking in on the Sun Devils in the NFL after week one of the regular season. ...

Sun Devil Football in the NFL: Week One Update Checking in on the Sun Devils in the NFL after week one of the regular season.