An impressive array of architectural forms can be produced from the popular interlocking building blocks known as Legos. All that is needed is a child’s imagination to construct a virtually infinite variety of complex shapes.

In a new study appearing in the journal Physical Review Letters, researchers describe a technique for using Lego-like elements at the scale of a few billionths of a meter. Further, they are able to cajole these design elements to self-assemble, with each Lego piece identifying its proper mate and linking up in a precise sequence to complete the desired nanostructure. 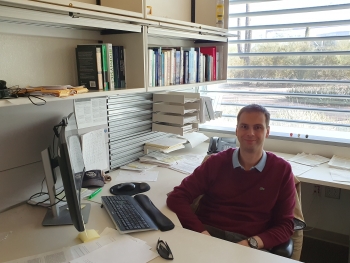 Petr Sulc is a researcher at the Biodesign Center for Molecular Design and Biomimetics and ASU’s School of Molecular Sciences. Download Full Image

While the technique described in the new study is simulated on computer, the strategy is applicable to self-assembly methods common to the field of DNA nanotechnology. Here, the equivalent of each Lego piece consists of a nanostructures made out of DNA, the famous molecular repository of our genetic code. The four nucleotides making up DNA — commonly labelled A, C, T and G — stick to one another according to a reliable rule: A nucleotides always pair with Ts and C nucleotides with Gs.

Using base-pairing properties allows researchers like Petr Sulc, corresponding author of the new study, to design DNA nanostructures that can take shape in a test tube, as if on autopilot.

“The possible number of ways how to design interactions between the building blocks is enormous, something that is called a ‘combinatorial explosion,’” Sulc said. “It is impossible to individually check every possible building block design and see if it can self-assemble into the desired structure. In our work, we provide a new general framework that can efficiently search the space of possible solutions and find the one which self-assembles into the desired shape and avoids other undesired assemblies.”

Sulc is a researcher at Arizona State University's Biodesign Center for Molecular Design and Biomimetics and School of Molecular Sciences. He is joined by his colleague Lukáš Kroc along with international collaborators Flavio Romano and John Russo from Italy.

The new technique marks an important stepping stone in the rapidly-developing field of DNA nanotechnology, where self-assembled forms are finding their way into everything from nanoscale tweezers to cancer-hunting DNA robots.

Despite impressive advances, construction methods relying on molecular self-assembly have had to contend with unintended bondings of building material. The challenges grow with the complexity of the intended design. In many cases, researchers are perplexed as to why certain structures self-assemble from a given set of elementary building blocks, as the theoretical foundations of these processes are still poorly understood.

To confront the problem, Sulc and colleagues have invented a clever color-coding system that manages to restrict the base pairings to only those appearing in the design blueprint for the final structure, with alternate base-pairings forbidden.

The process works through a custom-designed optimization algorithm, where the correct color code for self-assembly of the intended form produces the target structure at an energy minimum, while excluding competing structures.

Next, they put the system to work, using computers to design two crystal forms of great importance to the field of photonics: pyrochlore and cubic diamond. The authors note that this innovative method is applicable to any crystal structure.

To apply their theoretical framework, Sulc has started a new collaboration with professors Hao Yan and Nick Stephanopoulos, his colleagues at Biodesign and the School of Molecular Sciences. Together, they aim to experimentally realize some of the structures that they were able to design in simulations.

“While the obvious application of our framework is in DNA nanotechnology, our approach is general, and can be also used, for example, to design self-assembled structures out of proteins,” Sulc said.