Carbon-rich exoplanets may be made of diamonds

As missions like NASA’s Hubble Space Telescope, TESS and Kepler continue to provide insights into the properties of exoplanets (planets around other stars), scientists are increasingly able to piece together what these planets look like, what they are made of and if they could be habitable or even inhabited. 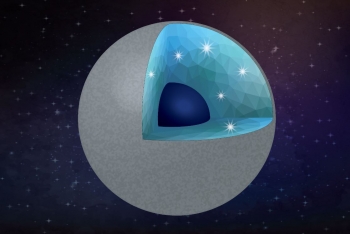 In a new study published recently in The Planetary Science Journal, a team of researchers from Arizona State University and the University of Chicago have determined that some carbon-rich exoplanets, given the right circumstances, could be made of diamonds and silica.

“These exoplanets are unlike anything in our solar system,” said lead author Harrison Allen-Sutter of ASU’s School of Earth and Space Exploration.

When stars and planets are formed, they do so from the same cloud of gas, so their bulk compositions are similar. A star with a lower carbon-to-oxygen ratio will have planets like Earth, comprised of silicates and oxides with a very small diamond content (Earth’s diamond content is about 0.001%).

But exoplanets around stars with a higher carbon-to-oxygen ratio than our sun are more likely to be carbon-rich. Allen-Sutter and co-authors Emily Garhart, Kurt Leinenweber and Dan Shim of ASU, with Vitali Prakapenka and Eran Greenberg of the University of Chicago, hypothesized that these carbon-rich exoplanets could convert to diamond and silicate, if water (which is abundant in the universe) were present, creating a diamond-rich composition.

To test this hypothesis, the research team needed to mimic the interior of carbide exoplanets using high heat and high pressure. To do so, they used high pressure diamond-anvil cells at co-author Shim’s Lab for Earth and Planetary Materials.

As they predicted, with high heat and pressure, the silicon carbide reacted with water and turned into diamonds and silica.

So far, we have not found life on other planets, but the search continues. Planetary scientists and astrobiologists are using sophisticated instruments in space and on Earth to find planets with the right properties and the right location around their stars where life could exist. 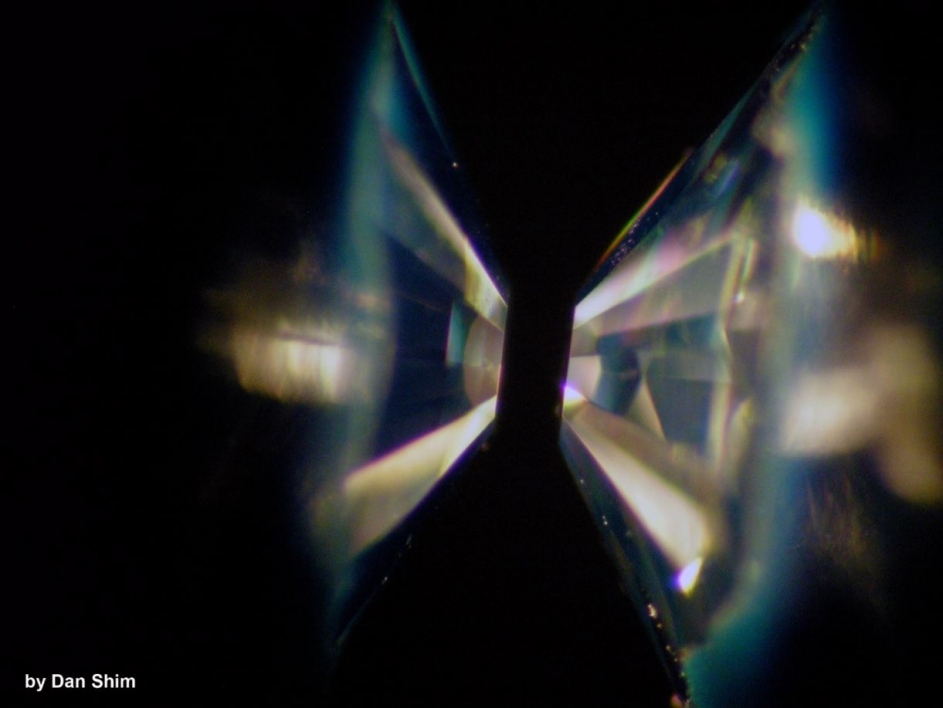 In a diamond-anvil cell, two gem-quality single crystal diamonds are shaped into anvils (flat top in the photo) and then faced towards each other. Samples are loaded between the culets (flat surfaces), then the sample is compressed between the anvils. 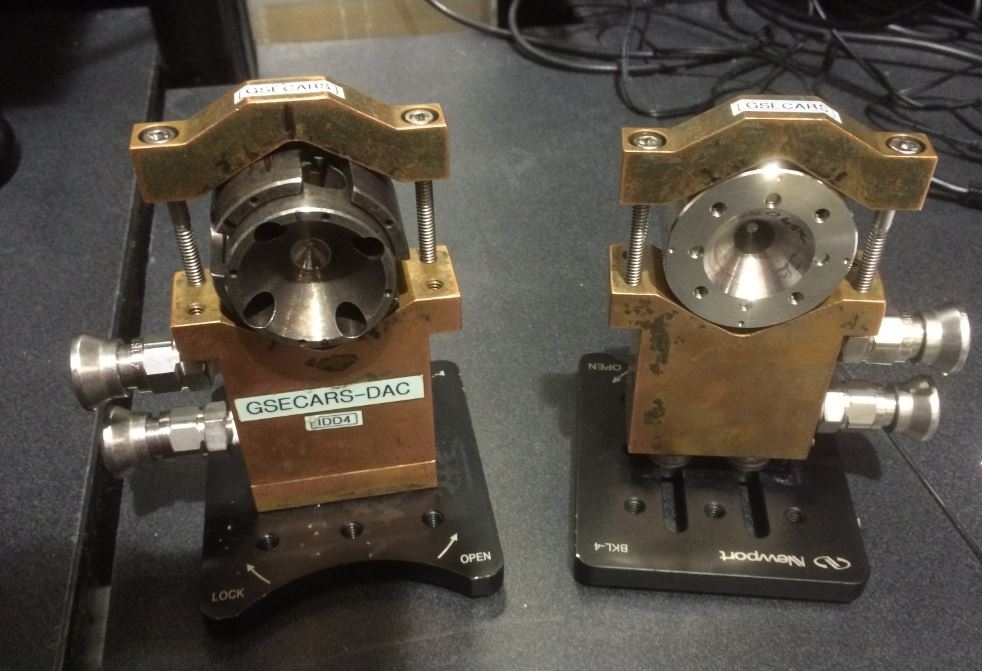 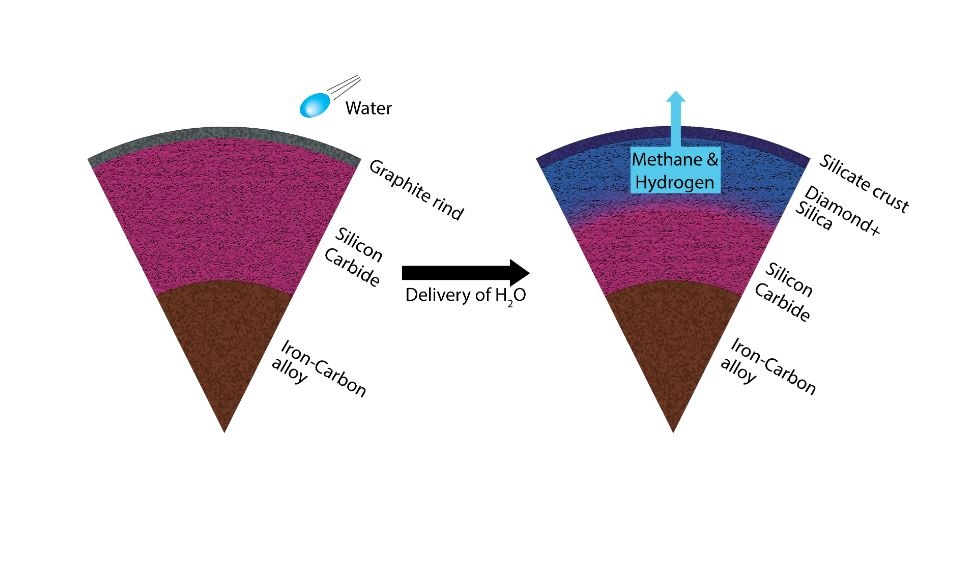 For carbon-rich planets that are the focus of this study, however, they likely do not have the properties needed for life.

While Earth is geologically active (an indicator of habitability), the results of this study show that carbon-rich planets are too hard to be geologically active and this lack of geologic activity may make atmospheric composition uninhabitable. Atmospheres are critical for life as it provides us with air to breathe, protection from the harsh environment of space and even pressure to allow for liquid water.

“Regardless of habitability, this is one additional step in helping us understand and characterize our ever-increasing and improving observations of exoplanets,” said Allen-Sutter. “The more we learn, the better we’ll be able to interpret new data from upcoming future missions like the James Webb Space Telescope and the Nancy Grace Roman Space Telescope to understand the worlds beyond our own solar system.”

A major collaborative effort that has been developing over the last three years between Arizona State University and European scientists has resulted in a significant technical advance in X-ray crystallographic sample strategies.The ASU contribution comes from the School of Molecular Sciences , Department of Physics and the Biodesign Institute Center for Applied Structural Discovery.The European ...

Tempe campus , The College of Liberal Arts and Sciences , Department of English , English

A major collaborative effort that has been developing over the last three years between Arizona State University and European scientists has resulted in a significant technical advance in X-ray crystallographic sample strategies.

The ASU contribution comes from the School of Molecular Sciences , Department of Physics and the Biodesign Institute Center for Applied Structural Discovery. 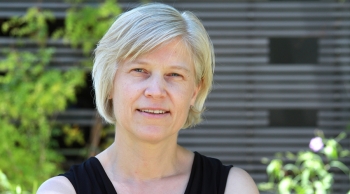 The European X-ray Free Electron Laser (EuXFEL) is a research facility of superlatives: It generates ultrashort X-ray pulses — 27,000 times per second and with a brilliance that is a billion times higher than that of the best conventional X-ray radiation sources. After 10 years of construction, it opened for initial experiments in late 2017. The group of Alexandra Ros, professor in ASU’s School of Molecular Sciences, was awarded the second allocation of beam time amongst worldwide competitors.

Their results, published Sept. 9 in Nature Communications, validated a unique microfluidic droplet generator for reducing sample size as well as waste (which can be as high as 99%) in her team’s Serial Femtosecond Crystallography (SFX) experiments. Using this, they determined the crystal structure of the enzyme 3-Deoxy-d-manno-Octulosonate 8-Phosphate Synthase (KDO8PS) and revealed new detail in a previously undefined loop region of the enzyme that is a potential target for antibiotic studies.

“We are excited that this work, resulting from a huge collaborative effort, has been well received in the XFEL community,” Ros said. “We are further developing this method and are seeking synchronization of the microfluidic droplets with the pulses of XFELs. At this very moment, a small team of ASU students has just finished performing experiments at the Linac Coherent Light Source at the SLAC National Accelerator Laboratory in Menlo Park, California, to refine the method. There could not have been better timing for the publication of our work.”

SLAC has been the XFEL facility best known to U.S. scientists, where the now-famous work on crystallography of protein nanocrystals — by the ASU team led by professors John Spence and Petra Fromme — was carried out. SLAC and its companion in Europe, also at Hamburg, have been very successful and consequently, have become heavily overbooked. The coming-on-line of the new facility, with its giant 2.6-mile accelerator tunnel and atomic length scale resolution, has relieved some of the demand on the other facilities, while offering grand new possibilities in the physical sciences. 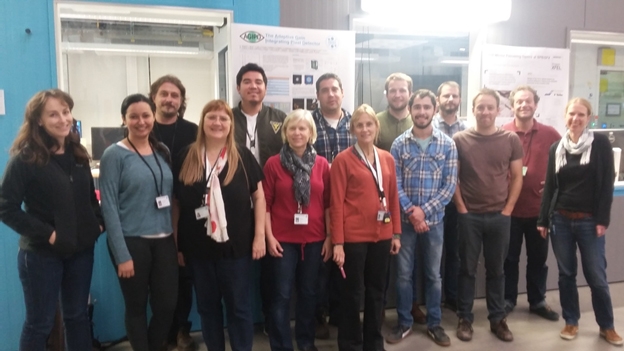 SFX is a promising technique for protein structure determination, where a liquid stream containing protein crystals is intersected with a high-intensity XFEL beam that is a billion times brighter than traditional synchrotron X-ray sources.

Although the crystals are destroyed by the intense XFEL beam immediately after they have diffracted, the diffraction information can, remarkably, still be recorded thanks to the state-of-the-art detectors. Powerful new data analysis methods have been developed, allowing a team to analyze these diffraction patterns and obtain electron density maps and detailed structural information of proteins.

The method is specifically appealing for hard-to-crystallize proteins, such as membrane proteins, as it yields high-resolution structural information from micro- and even nanocrystals, thus reducing the contribution of crystal defects and avoiding the tedious, if not impossible, growth of the large crystals demanded by traditional synchrotron-based crystallography.

While crystallography with XFELs has been a powerful technique for unraveling the structures of large protein complexes and also permitting time-resolved crystallography, this cutting-edge science nevertheless engenders a major problem. Because of the small “hit” rate it requires huge amounts of suspended protein, which although not irradiated, are cumbersome to retrieve for most protein samples. As much as 99% of the protein can be wasted.

Droplets are generated in the microfluidic T-junction, indicated by red arrows. The droplet carries crystals that will be delivered to the XFEL.

Herein lies the major technical advance made by Ros and her team. They have developed a 3D-printed microfluidic device, which is high-resolution, and generates aqueous-in-oil droplets of variable droplet segmentation that can be synchronized to the free electron laser pulses. This dramatically reduces the amount of purified protein needed for the European XFEL experiment from the currently typical (and almost inaccessible) 1 g requirement for full data set recording.

The researchers’ approach interleaves sample-laden liquid “slugs” within a sacrificial liquid, so that a fast-moving liquid microjet is maintained with sample present only during exposure to the femtosecond XFEL pulses (one millionth of one billionth of a second in duration).

The team of scientists has demonstrated droplet generation of the enzyme KDO8PS crystal suspensions with the microfluidic droplet generator and shown that the droplet generation frequency can be controlled by the rates of the aqueous and oil streams. The diffraction quality of the crystals of KDO8PS is similar both when injected in aqueous droplets surrounded by oil or by continuous injection with a gas dynamic virtual nozzle, with approximately 60% reduction in sample consumption achieved with droplet injection.

The determined structure revealed new detail in a previously undefined loop region of KDO8PS, a potential target for antibiotic studies. These results advocate for future routine integration of droplet generation by segmented oil flow at other XFELs around the world.

Co-first authors on this paper are Ros’ doctoral students Austin Echelmeier (graduated) and Jorvani Cruz Villarreal in the School of Molecular Sciences.