Robert Farid Karimi wants to amplify the ways people tell stories, and as a new assistant professor in Arizona State University's School of Music, Dance and Theatre, Karimi hopes to do that through theater.

Karimi, who uses gender-neutral pronouns, has 25 years of experience as a creative developer and comedic storyteller, some of which were spent working with ASU on groundbreaking projects. A graduate of UCLA with an MFA from the USC Roski School of Art and Design, Karimi created programs in high schools in Chicago and Minneapolis and has worked with performers all over the world. 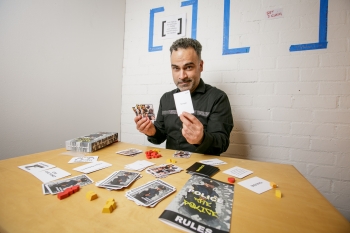 Karimi worked for corporate clients like HBO (Def Poetry Jam), General Mills and the Kresge Foundation. They bring food, comedy and interactive storytelling to events as small as 25 and as large as 5,000. They also design game-performances, interactive immersive theater experiences and themed entertainment to engage players to share stories and discuss social issues that concern the various communities they visit.

“Teaching art, design, games, theater and performance is a part of my artistic practice,” Karimi said. “I think about how to engage people. Theater is the language I first used to think about that engagement.”

As a touring solo performer and spoken-word artist, Karimi was not only asked to perform, but also to attend workshops where they would share ideas, dialogue and all that encompasses acting beyond just skills.

“It made me think about theater as part of the life journey and how theater can be an asset to us no matter what path we take.”

This fall, Karimi is teaching Acting I to theater students and plans on wearing all of the hats they feel a theater professor should wear.

Karimi hopes to bring this spirit and to “be a spark to someone.”

“We are so pleased that Robert Farid Karimi has joined us,” said Heather Landes, director of the ASU School of Music, Dance and Theatre. “Karimi’s 25 years of experience as a creative storyteller and actor and their work engaging community in conversations addressing social issues through interactive experiences aligns well with ASU’s mission of responsibility for the economic, social, cultural and overall health of the communities we serve.”

Karimi was first invited to teach as a guest artist at ASU to engage communities with their Creative Capital supported work, The Peoples Cook Project. The culinary engagement project combines humor, cross-cultural exchange and food where participants’ stories, recipes and cultures are the focus of artistic nourishment. As the revolutionary cook Mero Cocinero, Karimi’s alter-ego for the project, Karimi has cooked for such luminaries as DJ Peanut Butter Wolf, poet Jose Montoya, Yuri Kochiyama, Michele Serros and hip-hop superstar MF Doom, as well as for over 60,000 people in the last 11 years.

In 2012, with a team of researchers from the Herberger Institute of Design and the Arts and the School of Nutrition and Health Promotion, Karimi focused on the relationship between creativity, theatrical performance and changes in dietary attitudes and beliefs. They worked with nutrition students and health workers to see if creative activities enhance nutrition education skills. PBS produced a short documentary on their residency at ASU.

Before the pandemic, Karimi was working on a board game examining police brutality and had planned to produce and direct “Swimming Pool Party,” an interactive game-performance they premiered in Los Angeles in 2019. It takes place in a futuristic land where people are separated by those who can swim and those who cannot. The premise: to get audiences focused on the inequitable amount of communities of color that do not know how to swim. They still hope to attempt this project virtually, seeing the roadblocks as an opportunity rather than a hindrance.

Karimi hopes to continue their work on interdisciplinary game-performance and playfulness in socially engaged art, and shares that they would “also like to introduce the campus to a group of interdisciplinary cross-cultural thinkers, performers and doers that use the theater vocabulary to create their work and create global social change.”

When people are incarcerated, their families also suffer, surrounded by shame and stigma. Especially little kids.Sometimes, children will make up stories to explain why their parent isn’t around.The Center for Child Well-Being at Arizona State University has been holding summits on the topic of incarceration over the past few years, with experts and advocates sharing best practices to help the... When people are incarcerated, their families also suffer, surrounded by shame and stigma. Especially little kids.

Sometimes, children will make up stories to explain why their parent isn’t around.

The Center for Child Well-Being at Arizona State University has been holding summits on the topic of incarceration over the past few years, with experts and advocates sharing best practices to help these families.

“Families were reaching out to educators for help with, ‘How do we explain this to the kids? How do we explain where their parents are? We don’t know what language to use,’” said Judy Krysik, director of the center and an associate professor in the School of Social Work.

“If the kids are telling stories, it’s something bad to be ashamed of. There is so much stigma.”

The center heard from teachers too.

So the center has created a resource for families and teachers around the state, and they've gotten some help from a well-known Sun Devil to promote it.

“Even parents make mistakes” is the catchphrase used on posters in libraries around Arizona that accompany displays of children’s books about incarceration. The posters feature Zylan Cheatham, who played for the Sun Devil basketball team in 2018–19 and is now on the New Orleans Pelicans in the NBA.

Cheatham was interested in helping to promote the campaign because when he was growing up in south Phoenix, his father was incarcerated. 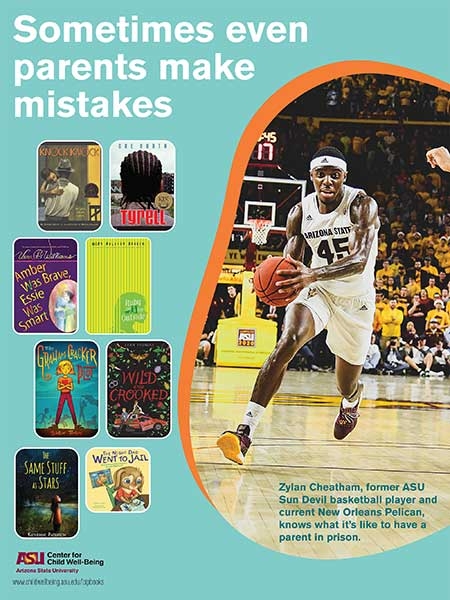 Former Sun Devil basketball star Zylan Cheatham, now a player with the New Orleans Pelicans of the NBA, is promoting the children's book initiative with this poster. His life was impacted by incarceration.

Melinda Borucki, communications and events manager with the Center for Child Well-Being, spent months last year poring through children’s book catalogs and online sites to find books in which the main character is a child affected by incarceration. She found 45 books, ranging from toddler to young adult, for the collection.

“I approached all the libraries in Arizona last summer, and said, ‘All we want you to do is put out a display of the books. I can give you the posters,’” Borucki said.

But many libraries, especially in rural areas, told her that they didn’t have the funds to purchase the books.

“We started raising funds slowly, piecemeal from donors,” she said. “And then we had a very generous benefactor, the Hickey Foundation, and they gave us a grant to purchase books for 13 libraries that needed them.”

The center purchased the books from Changing Hands, an independently owned bookstore with locations in Tempe and Phoenix.

Borucki hasn’t been able to deliver the books yet because of the pandemic, which also suspended the center’s spring summit on incarceration, when the promotional campaign featuring Cheatham was supposed to debut.

The collection of 45 books likely doesn’t include all titles that are about young people dealing with incarceration, Borucki said.

“The list is a work in progress. Hopefully we’ll continue to build and expand it,” she said.

The books include a range of scenarios, including foster children who have parents who are incarcerated, Black and Native American families and one book that was written by a group of teenagers.

“We want to expand to school libraries, community centers and anywhere there’s a child who is impacted by incarceration,” Borucki said. “The goal is to get all of the state of Arizona covered.”

About 2 million children are affected by incarceration right now across the country, with 5 million having dealt with it at some point in their lives, Krysik said.

“Some people are in and out, and some children have a parent who will be in prison for the rest of their lives,” she said.

The message of “Even parents make mistakes” will itself reduce stigma, Krysik said.

“This is not just for children who are affected by incarceration, but also for those who aren’t, so that hopefully they will gain empathy when they encounter another child who is,” she said.

The ASU Foundation has set up a link to donate to the Empathy Through Literacy Project.