A federal government contest created to expand solar energy manufacturing in the United States has awarded its grand prize to a startup venture from the Ira A. Fulton Schools of Engineering at Arizona State University.

SunFlex Solar learned on Aug. 28 that it is one of two ultimate winners in the second round of the American-Made Solar Prize, a competition initiated by the National Renewable Energy Laboratory and the U.S. Department of Energy’s Solar Energy Technologies Office. 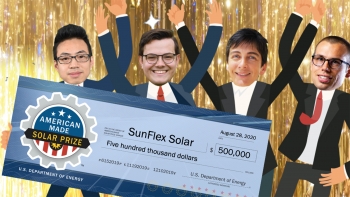 The company will receive half a million dollars to develop its novel, low-cost method of enhancing solar panel efficiency, as well as an additional $75,000 in vouchers for technical support from national laboratories and associated fabrication operations.

This major award follows wins during two previous stages of the same competition. SunFlex Solar received $100,000 in prize money as well as another $75,000 in vouchers upon selection as a finalist in late March. Six months earlier, the company won $50,000 as a semifinalist.

The foursome from the School of Electrical, Computer and Energy Engineering, one of the six Fulton Schools, say they are excited and grateful for national recognition of their efforts.

“Selection as a winner means the Department of Energy believes that our technology offers viable support to revitalizing photovoltaics manufacturing in the United States,” Yu said. “This prize represents a milestone along our innovation trajectory.”

The company’s next steps involve acquiring new equipment to improve their production process as well as increasing the size of their prototype to commercial scale. Alongside that upsizing, SunFlex Solar needs to prove its innovation will function in real-world conditions.

“Solar panels need to survive in the elements for many decades, and different aspects of climate affect the various materials of a solar panel in different ways,” Fisher said. “So, there is a series of tests that new products need to pass. We’ll be focusing on the ones that affect the connection points between the solar cells and our new foil technology.”

Fisher said the tests assess the impact of environmental stressors like variations in temperature, exposure to moisture and mechanical flexing from wind or a layer of snow. Fortunately, she says, these conditions can be duplicated in a lab in an accelerated manner, so their venture doesn’t have to wait years to certify its product.

Alongside victory in this competition, SunFlex Solar is excited to enter a new joint development agreement with a commercial partner in Washington state. Details of the deal are not yet released, but initial manufacturing is expected to begin soon.

“We are very excited by this opportunity,” Holman said. “SunFlex Solar will scale our technology to industry-standard, 60-cell modules and secure the required laboratory validation testing. Our new partner will subsequently manufacture a pilot round of 30,000 panels representing 10 megawatts of power.”

Holman says their partner’s plan is then to ramp up annual production to 500 megawatts and eventually to five gigawatts or 15 million solar modules per year. He also says this investment, equating to millions of dollars, would not be possible without the spotlight of the American-Made Solar Prize competition.

“It’s no small feat to capture the attention of an equipment or module manufacturer and ask them to pivot from what they are doing now to take a chance on something new,” Holman said. “So, apart from the prize money, this major award is a cue to potential partners to see a venture as something real and worthy of investment.”

The latest round of this recurring contest began in July and is open to new submissions until Oct. 8. Competitors need to supply materials including a short video identifying a solar energy challenge, a proposed solution and a plan to achieve that solution.

As current competition winners, the principals at SunFlex Solar can offer some helpful advice to new entrants.

“Focus on the business side of your idea,” Holman said. “Use the National Science Foundation’s Innovation Corps methodology of customer discovery. Get people on the phone early in your project, and realize that talking to them doesn’t mean trying to sell the thing that you created. It’s really about trying to understand the market, and how your idea fits in.”

Hartweg agrees that success in the American-Made Solar Prize competition and more broadly requires substantive focus on the business side of technical innovation. This perspective inspired him to pursue his doctoral degree at the Fulton Schools.

“Something that attracted me to ASU is the number of professors who are interested in commercial relevance,” he said. “Many other universities and research programs get very technical and look at really small issues. But I wanted to work on technologies that can really make a difference to industry. That’s exactly what we’re doing here in creating high-efficiency innovation for commercial application. And our success in this competition is validation of that approach.”

Bobby Hurley, Pat Tillman and Randall McDaniel: All Part of "Get To Know Q&A" of Cameron Sisk

Bobby Hurley, Pat Tillman and Randall McDaniel: All Part of "Get To Know Q&A" of Cameron Sisk Get to know junior men's golfer Cameron Sisk, a third-team All-American in 2019-20.