In what would become a remarkable career as a Sandra Day O’Connor College of Law professor, Jonathan Rose began teaching in September 1968, the second year of the new College of Law. Although he looked forwarded to teaching, his assignment to teach contracts troubled him.

“When Ped (late Professor Willard ‘Ped’ H. Pedrick, founding dean of ASU Law) told me I would be teaching contracts, I was not very happy about this,” Rose said. “I had little affinity for contracts and my law school contracts course was not great. But teaching first-year contracts turned out to be the most rewarding, enjoyable and probably successful aspect of my 47 years of teaching.” 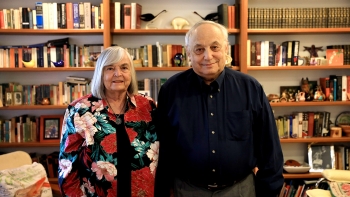 Adding a 2L antitrust course and other courses throughout his career, English legal history ultimately became Rose’s primary academic field. Honored with several awards for outstanding teaching, Rose is the Willard H. Pedrick Distinguished Research Scholar Emeritus, and ASU Law is now naming a professorship for him and his wife, Wendy.

A graduate of the University of Minnesota Law School in St. Paul, where his family had lived for more than 100 years, Rose and Wendy married soon after he earned his Juris Doctor and before he accepted his first job in the early 1960s for the U.S. Department of Justice Honors Program in the Antitrust Division in Washington, D.C. That is where Pedrick, who heard of Rose from then-University of Minnesota Law Dean William Lockhart, would eventually entice him to come to Arizona.

“I liked practicing law although a government practice is very different than one in a firm,” Rose said. “I had gotten some trial experience and liked it and did well. But after almost five years in the Department of Justice, I was at a decision point. I needed to decide whether to stay longer in the Department of Justice, join a firm in D.C., St. Paul or elsewhere, or become a law professor.”

Rose remembers the moment in the fall of 1967 when Pedrick walked into his D.C. office to talk about joining the faculty at ASU Law, one of 10 law schools recommended by Lockhart.

“I was very surprised as I had not yet been contacted by ASU and did not recognize him," Rose said. "He introduced himself, said he’d gotten my name from Dean Lockhart.

“Since there were two other lawyers sharing the office, I was fortunately able to use the assistant attorney general’s conference room. Dean Pedrick, in his own inimitable way, extolled the virtues of the ASU’s new law school and Arizona and invited me to come out and interview. I accepted,” Rose said.

And that began his storied career of teaching and his firm belief in its critical importance.

“I really enjoyed teaching and found it professionally rewarding,” Rose said. “ASU gave me the opportunity to be employed doing work that I really liked to do. Not everyone has the good luck to end up in a job and employment activity that they like and enjoy as much as I did.”

Rose added that the faculty and students are the lifeblood of ASU Law. “I have been supporting scholarships for students for the last decade and will continue to do so. Now it is time to also support the faculty and thus, my endowment of the Jonathan and Wendy Rose Professor of Law.” 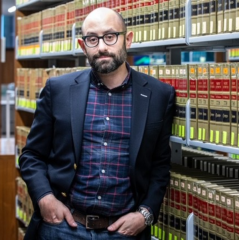 “I am humbled by this appointment. Jon and I were colleagues for many years, and I know how much ASU Law means to Jon and Wendy. It is an honor to hold a position in their names,” said Kramer, who was previously recognized with the Mary Sigler Fellowship. He teaches and writes in the areas of property law and civil rights law. He is the author of "Outsiders: Why Difference is the Future of Civil Rights" (Oxford 2019).

“Mary was a beloved mentor and friend to me. We shared a deep interest in the welfare and treatment of animals. I am humbled to hold a fellowship honoring a remarkable person and scholar,” Bradshaw said. 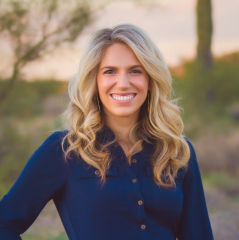 Bradshaw is concurrently a faculty affiliate scholar with the Classical Liberal Institute at New York University School of Law and senior sustainability scientist at the Global Institute of Sustainability at Arizona State University. She is the author of "Wildlife as Property Owners: A New Conception of Animal Rights," forthcoming from University of Chicago Press. She also has published more than 20 articles in law and peer-reviewed journals at the intersection of property, administrative, natural resources, animal, and environmental law.

The Mary Sigler Fellowship was created in 2019 to recognize Sigler as a tremendous scholar, teacher and citizen. A lifelong academic, Sigler earned her bachelor’s degree and doctorate from ASU and juris doctorate from the University of Pennsylvania. She joined ASU Law faculty in 2003 and was later appointed as an ASU Law associate dean in 2012. A leading expert in criminal law and jurisprudence, she was a frequent contributor to leading law journals, with dozens of publications, and was a sought-after panelist at international conferences. Sigler was part of the ASU Law faculty until her death in 2018 after a nearly three-year battle with pancreatic cancer.

With a shifting landscape facing learners of all kinds, Arizona State University today announced a new initiative that will accelerate the university's efforts to redesign American higher education. The initiative is supported by the Stand Together community."The work advanced through this partnership will drive a culture change and the commitment to redesign and restructure higher education that...

With a shifting landscape facing learners of all kinds, Arizona State University today announced a new initiative that will accelerate the university's efforts to redesign American higher education. The initiative is supported by the Stand Together community.

"The work advanced through this partnership will drive a culture change and the commitment to redesign and restructure higher education that we embrace at ASU and that is critical to the success of students across the country," said ASU President Michael M. Crow. "The public health pandemic that has swept the globe and the stress it has placed on our education system has exposed weaknesses that have existed for years. Universities are being forced to adapt right now, and so we're saying, 'Let's take advantage of this opportunity and let's build things in a way that serves the learner in a new world that doesn't look anything like the one that existed when most of America's institutions of higher learning were designed.'" 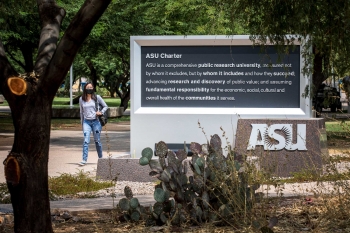 Students walk past the ASU charter sign on the Polytechnic campus on the first day of the fall semester Aug. 20. Photo by Charlie Leight/ASU Now Download Full Image

ASU's new University Design Institute (UDI) will coordinate the initiative and support other universities to implement their own culture change initiatives. The goal is to broaden access to world-class education methods and cutting-edge technological innovations that are tailored to empower students and be responsive to their specific needs and goals. ASU's design-driven commitment to both educational access and scholarly excellence — two historically opposing objectives — has captured the attention of leaders within and outside universities from around the world. The former teachers college stands out among research universities in such factors as its 380% increase from 2002 to 2019 in enrollment of students from low-income families. During this same period, first-generation undergraduate student enrollment increased from 7,500 to nearly 26,000, Hispanic undergraduate student enrollment increased from about 5,000 to 20,500, and Black undergraduate student enrollment increased from less than 1,500 to more than 4,500.

Financial commitments by the Charles Koch Foundation, the Morgridge Family Foundation, Michael and Beth Kasser, Ambassador Frank and Kathy Baxter, Mike and Cindy Watts, the O'Neil Family Foundation and Gary and Claudia Phillips are supporting the initiative. The nearly $12 million in donor gifts will contribute to an overall campaign to raise $30 million to support this initiative. With these gifts, ASU will:

"The principle of individual empowerment and a student-centric approach to learning and to education is a shared commitment, one where we are called to take action and broaden the network of stakeholders engaged in bringing about a change of culture," said Crow. "The goal is not to replicate ASU, but to advance a design model that enables every university to put learners, of all ages and life circumstances, at the center, implemented in the way that works best for the students served by that institution."

"UDI is intended to help universities speed innovation, enhance outcomes, lower costs and scale impact," said Crow. "The point is to not have one model, but to have many models that fit the circumstances of anyone who aspires to learn and to contribute to their community."

"ASU has made transformational changes in its comprehensive efforts to improve access and learning outcomes for its students at an affordable cost. This new initiative will invite other universities to develop and apply new ideas in partnership with their peers, leading to increased opportunity for millions of learners," said Charles Koch Foundation Executive Director Ryan Stowers. "We are thrilled to support this work to empower university leaders with a forum and support network to help drive innovation and better serve their students. There is no better time than now to think about how we can innovate to open new opportunities for as many people as possible."

Watch this video to learn more about the partnership.