Francine Banner, graduate of the justice studies Phd program at Arizona State University's School of Social Transformation was recently selected for an honorable mention at the ASU Humanities Book Awards for her book “Crowdsourcing the Law: Trying Sexual Assault On Social Media.”

The honorable mention was awarded by the Institute of Humanities Research at ASU, which holds a book award reception annually to highlight writers who foster new directions in their disciplines. 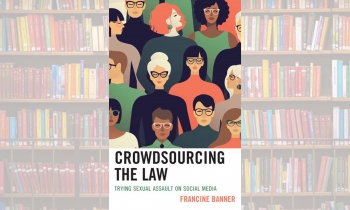 The book explores the discussion of sexual assault, particularly on social media. Banner said these digital conversations are more crucial than some would initially believe, and that they can have an impact on courtroom decisions.

“Some people dismiss conversations on the internet as ‘throwaway’ speech, but I argue that in fact the court of public opinion is shaping the law. How the formal legal system will react to and incorporate public opinion remains to be seen,” Banner said.

A major example that Banner discusses is the #MeToo movement, which has led to significant legal changes, such as extending statutes of limitation or even the removal of judges. Other online campaigns have also successfully petitioned for the retrial of people who may have been wrongfully convicted.

While it is clear that social media plays a major role in creating movements and important conversations, the formalities of the legal system can often blur the significance of everyday talk and commonsense. Banner said this idea was a major inspiration when writing the book.

“I am fascinated by how law is being shaped in the context of everyday conversations. What we might call ‘common sense’ ideas have always had an impact on legislation and court decisions,” she said.

Banner said she was also inspired to explore how social media commentary is affecting sexual assault law because it is an area of law that is heavily impacted by race and gender bias. Social media has helped to bring these issues to light to create new conversations and lessons on the disparities in the legal system.

“We are at a time when public awareness of the flaws in the criminal justice system is at an apex. The public is rightfully angry at the system for its historically biased treatment of victims and the wrongfully accused,” Banner said.

While researching for the book, Banner focused on recent accusations of well-known figures such as Bill Cosby and Donald Trump, and used discourse analysis to closely study a small number of comments on social media to explore overall consciousness about sexual assault.

“What we have to say about these highly publicized cases is important because they provide a space for us to discuss and debate how we feel about contested social issues, to assess the state of our values and norms, and to consider what law should look like in the future,” Banner said.

While discussion on social media can be impactful and important, Banner does not dismiss the fact that opinions on the internet can also be very quick to raise judgements without receiving full information.

“The public also often races to judgment. On social media there is an excess of public shaming and often not a lot of due process,” Banner said.

Banner said her experience at ASU helped her develop into an interdisciplinary teacher and scholar. It pushed her to broaden her studies and think critically both in and outside the classroom.

“ASU fostered my commitment to praxis — that theoretical work must be connected to creating social justice and social change,” Banner said.

Banner plans to continue exploring the topics in her book as well as other aspects of sexual assault and social media. She believes it is important to always analyze and discuss public reactions to allegations and law because it reflects where it is going.

“Because so few sexual assault cases actually reach conviction, I argue that examining the public discussion of these allegations provides a unique and important lens into the real-life operation of sexual assault law today,” Banner said.

In ongoing efforts to advance women’s equality and ensure every woman’s voice is heard, the Sandra Day O’Connor College of Law at Arizona State University is creating dynamic programs and events as part of its “Future Fifty” women’s initiative launched earlier this year.With ASU Law reaching more than 50 years of impact and as one of the few law schools named after a woman, the Future ...

In ongoing efforts to advance women’s equality and ensure every woman’s voice is heard, the Sandra Day O’Connor College of Law at Arizona State University is creating dynamic programs and events as part of its “Future Fifty” women’s initiative launched earlier this year.

With ASU Law reaching more than 50 years of impact and as one of the few law schools named after a woman, the Future Fifty initiative was created to provide meaningful topics and discussions for female students, faculty and top women in law — encouraging further progress in the next 50 years. Following the launch of the popular Future Fifty Conversation Salon Series featuring female leaders and experts, the latest program is “Into the Den.” The new series, suggested by female law students, offers the opportunity to have engaging, small-group conversations with prominent women in law.

During one-hour, virtual sessions scheduled over lunch, Into the Den participants hear from ASU alumni and other women in the legal field to learn about how they’ve used their talent, skill and intellect to create highly successful careers in a professional landscape that presents unique challenges for women.

Colleen Gautam, ASU Law 2008 grad, was the featured speaker in the first Into the Den discussion held Aug. 24 and attended by six ASU Law 1L, 2L and 3L students. Gautam talked about her early career as a litigator with Snell & Wilmer, one of Phoenix’s leading law firms, where Gautam gained the experience to become now general counsel and vice president of administration for the Valley of the Sun United Way.

Students asked Gautam for advice in areas including networking during COVID-19, what classes to focus on and whether it is still a man’s world in the legal profession. She encouraged them to take classes they’ll need if they have a very specific career path, but to remember to get the most out of their learning experience.

“I took classes where I was interested in the subject matter. You’re going to learn what you need to learn from the jobs you decide to pursue, and gain mentoring from upperclassmen along the way and do what you can to meet people in the profession you want to be in,” Gautam said. She added that she fortunately “never ran into the chance to not get ahead because I was female. Position yourself where you want to be and advocate for yourself and connect with the people who can help.”

Future Into the Den sessions, scheduled through December, will continue to bring together a small group of students and one legal professional, ensuring the conversation is casual, warm and meaningful. Topics will vary, thoughtfully curated by each host, so that participants have the opportunity to hear firsthand from women with varied backgrounds and points of view.

Other upcoming Future Fifty events include:

You also can support these vital programs by making a donation today.