Since its creation more than 30 years ago, the Indian Legal Program at the Sandra Day O’Connor College of Law at Arizona State University has grown to become one of the best of its kind. And the meaningful work the program’s alumni pursue is a key reason. 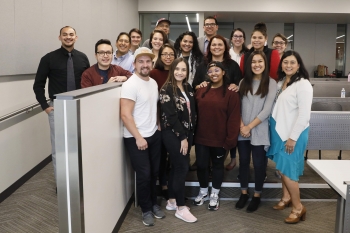 ILP alumni give back whenever they can. ASU Law alums Doreen McPaul (’01) and Kimberly Dutcher (’01) stopped by the law school last year to give a lunch lecture to ILP students and community. Download Full Image

From roles in prestigious law firms, tribal governments and entities, public agencies and more, Indian Legal Program grads are making a difference for Indian Country across the U.S.

Here are some recent examples of where alumni are making an impact.

Kris Beecher, an ASU Law 2020 JD graduate and W. P. Carey School of Business MBA grad, is an enrolled member of the Navajo Nation and a Navajo Nation Bar Association member who recently completed a three-year term as chairman of the board of the largest public housing authority in Indian Country and nearly the eighth largest in the U.S. After taking the bar, Beecher will be joining prominent national law firm Dickinson Wright and plans to put his Indian Law Certificate to use working with tribes on economic development.

“As a participant in the Indian Legal Program, I’ve been able to jump-start my law career in multiple ways,” said Beecher, an O’Connor Merit Scholar, Cobell Scholar and Chief Manuelito Scholar. “The Indian Legal Program has taken me to Washington, D.C., to meet with members of Congress and federal officials, as well as help individual tribal members protect their right to vote and make important legal decisions for their families.”

Charles Galbraith, ASU Law 2005 JD graduate and a former White House tribal liaison for President Barack Obama, was named a partner and co-chair of the firm’s Native American Law Practice. Lawrence Roberts, ASU Law professor of practice and executive director of the Indian Gaming and Tribal Self-Governance Program, was named special counsel. And Krystalyn Kinsel, ASU Law 2015 JD graduate and a former trial attorney in the Attorney General Honors Program of the U.S. Department of Justice Natural Resources Section of the Environment and Natural Resources Division, was named an associate. 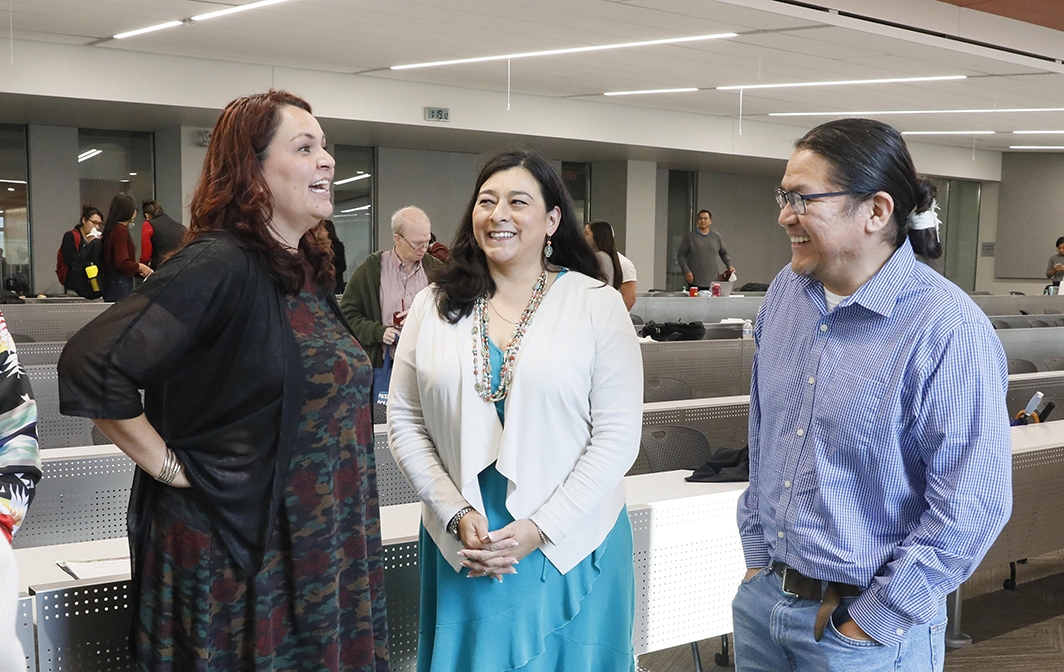 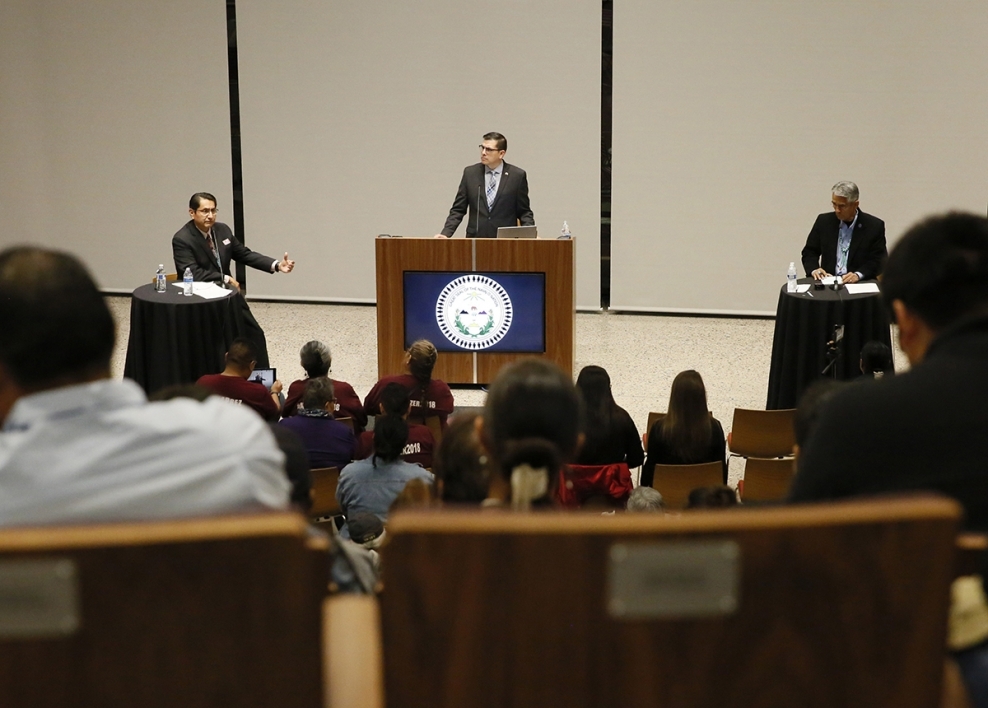 “I envisioned a law firm that would only focus on federal Indian law, meaning we wouldn’t represent banks or development companies or casino interests or oil companies,” said Rosette in a recent ASU Law news story. “Just practice Indian law, purely on the tribal side as a tribal member from Rocky Boy. That was my original ambition and what I always wanted to do.”

Rosette, LLP, now has offices in Arizona, California, Michigan, Oklahoma and Washington, D.C., and a staff of 26 attorneys with nearly half from ASU Law’s Indian Legal Program.

Rosette is thankful for what the ILP provided, both in terms of his own education and a pipeline of talented attorneys for his law firm, and stays deeply involved. He is a member of the Indian Legal Program advisory board and founded the Rosette, LLP, American Indian Economic Development Program, which presents the annual “Wiring the Rez” e-commerce conference for tribal governments, businesses and entrepreneurs.

When Navajo Nation Attorney General Doreen McPaul was appointed to her position in January 2019, she asked fellow 2001 ASU Law JD Kimberly Dutcher to be her deputy attorney general. The two have become a powerful team of ILP alumni in the Navajo Nation Department of Justice.

“I hope to make a positive difference for my tribe and my own people,” McPaul said in a recent ILP blog offering thoughts on their positions and advice for students. “At the Department of Justice, that means organizing the department in a way that best serves the needs of our clients, being responsive to client requests, and supporting our legal team so that they are enabled to provide the highest quality of legal services to our clients.”

McPaul and Dutcher have advice for current ILP students, with Dutcher saying, “You can go home again! Tribal nations have so many challenges and it is normal to want to be involved in everything, but everyone has the same 24 hours each day, so prioritize. Remember your role as an attorney and who makes decisions. While you are in law school, learn about different legal career paths and find what interests you and how you can use it to best serve your nation, if that is what you choose to do.”

A nearby star, the host of two (and possibly three) planets, was initially thought to be quiet and boring. These attributes are sought-after as they create a safe environment for their planets, especially those that may be in what scientists call “the habitable zone” where liquid water could exist on their surfaces and life might be possible. But astronomers at Arizona State University have an...

A nearby star, the host of two (and possibly three) planets, was initially thought to be quiet and boring. These attributes are sought-after as they create a safe environment for their planets, especially those that may be in what scientists call “the habitable zone” where liquid water could exist on their surfaces and life might be possible. But astronomers at Arizona State University have announced that this nearby star turns out to be not so tame after all.

This star, named GJ 887, is one of the brightest M stars in the sky. M stars are low-mass red stars that outnumber stars like our sun more than tenfold, and the vast majority of planets in our galaxy orbit them. 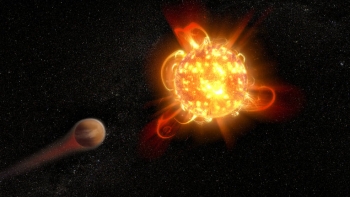 GJ 887 had initially been spotlighted for the apparently gentle space environment it provides to its recently discovered planets. In monitoring by NASA’s Transiting Exoplanet Survey Satellite (TESS), a mission to search for planets outside our solar system, the star oddly exhibited no detectable flares over 27 days of continuous observations.

And an absence of flares is a quality that favors the survival of atmospheres on planets orbiting the star, and therefore potential life on those planets.

But ASU astronomers Parke Loyd and Evgenya Shkolnik of ASU’s School of Earth and Space Exploration had their doubts about GJ 887 being all that quiet. Digging into archival Hubble Space Telescope data, they found that GJ 887 actually flares hourly.

How did they spot this difference? By using far-ultraviolet light, Loyd, Shkolnik and their collaborators were able to see huge spikes in brightness caused by stellar flares.

Their findings were recently published in a Research Note of the American Astronomical Society, with co-authors from the University of Colorado, Boulder and the Naval Research Laboratory in Washington, D.C.

Because there are so many of them, M stars like GJ 887 are a key player in humanity's quest to understand where Earth fits into the grand menagerie of planets in the universe and in the search for life on other planets.

“If the genesis of life on a planet is more a less a roll of the dice, then M stars are rolling those dice far more than any other type of star,” Loyd explained.

But there is a catch. M stars are prone to peppering their planets with flares. They can also be two-faced, appearing calm in visible light, like that observed by the TESS mission. In reality, they can be rife with flares that are clearly apparent in ultraviolet light, which has photons (particles of light) of much greater energy than visible light. And each flare has the potential to bombard the star's planets with a magnetic storm and a shower of fast-moving particles, increasing the chances that the atmospheres of GJ 887's planets were eroded away long ago.

“It is fascinating to know that observing stars in normal optical light (as the TESS mission does) doesn’t come close to telling the whole story,” said Shkolnik. “The damaging radiation environment of these planets can only fully be understood with ultraviolet observations, like those from the Hubble Space Telescope.”

While ultraviolet monitoring of M stars is valuable, the resources astronomers have to devote to such observations are currently limited. Luckily, there are plans in the works for missions that can help fill this need, including an ASU-led CubeSat mission called the Star-Planet Activity Research CubeSat (SPARCS), for which Shkolnik is the principal investigator. This mission will provide astronomers with the observing time they need to capture ultraviolet flares from M stars and measure how often they happen, ultimately leading to a greater understanding of the stars and planets in our galaxy.

“A star’s ultraviolet emission is really a critical, albeit still missing, puzzle piece to our understanding of planet atmospheres and their habitability,” Shkolnik said.