Biological organisms are made up of interconnected systems of tissues, liquids and similar substances continually at work maintaining vital functions — vastly different in nature from inanimate matter. But not entirely so.

On and beneath the surfaces of manufactured materials, for example, there are countless interactions in motion within their microstructures, many at the atomic level, that determine how effectively those materials will perform the functions for which they’re made. 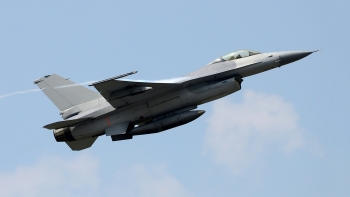 With a multi-university team of colleagues, Arizona State Univesity Professor Karl Sieradzki is undertaking a five-year research effort aimed at enhancing the performance and durability of metal alloys like those used for military jets. Other kinds of aircraft, as well as ships, space flight technologies and automotive vehicles are made largely of alloys. Photo courtesy of Shutterstock Download Full Image

Karl Sieradzki, a professor of materials science and engineering in the Ira A. Fulton Schools of Engineering at Arizona State University, is beginning work with six colleagues in his field at Johns Hopkins University, the University of Virginia and Northwestern University to get a deeper understanding of the workings of the fundamental structures and potential capabilities of metal alloys.

“We’re looking at the very smallest elements of what makes up these materials and how the environments they are exposed to impact them,” said Sieradzki, who teaches in the School for Engineering of Matter, Transport and Energy, one of the six Fulton Schools.

One key objective is finding the right combinations of chemical components to mix into so-called multiprinciple element alloys — also known as high-entropy alloys — that would best resist high-temperature oxidation and aqueous corrosion.

The research is supported by the U.S. Department of Defense Multi-University Research Initiative, or MURI, which funds research to facilitate advances in emerging technologies that will help to address national security and military challenges and potentially have applications in the commercial sector. 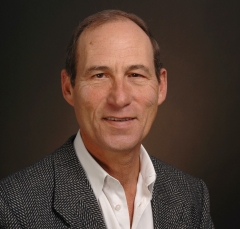 ASU Professor Karl Sieradzki’s expertise in materials science and engineering has earned him a place on his third research team to have won support from the U.S. Department of Defense Multi-University Research Initiative, or MURI. The program awards grants to fund high-priority science and engineering research considered essential to meeting the nation’s military and national defense challenges.

In the MURI project, supported through the Office of Naval Research, Sieradzki and his fellow research leaders aim to produce results that will improve alloys used in aircraft, ships and automotive vehicles, as well as space exploration technologies, Sieradzki said.

Research to date indicates high-entropy alloys can improve the tensile strength of materials and provide better resistance to fracture, but resistance to corrosion and high temperature oxidation remains a challenge the MURI project team will work to solve.

MURI projects often involve highly specialized areas of science and engineering. Researchers seeking funding must be able to show track records of progress in such demanding and multifaceted pursuits.

Sieradzki and his research team met that stringent requirement. The group’s proposal is one of only 26 projects to be selected for MURI awards from among 365 that underwent merit review by the Department of Defense for funding in the current 2020 fiscal year. The team will receive approximately $7.5 million over the next five years to support its members’ research. Sieradzki will be given $1 million of that total.

This is Sieradzki’s third MURI project, one in which he will drive work on some essential aspects of the research. His role will involve studies to expand the application of a process called passivation, involving the formation of protective oxide films on metal surfaces that can reduce the rate of corrosion and high-temperature oxidation.

That effort will include further development of the use of percolation theory, which involves “arranging the atomic elements of metals in a certain way that results in effective passivation,” he said.

Sieradzki will also conduct further examinations of high temperature oxidation, which causes materials to lose mechanical properties due to temperature increases and chemical reactions of metal with the environment.

“It’s a type of environment a jet engine would be exposed to, or that a spacecraft might be exposed to on reentry,” he said.

Roger C. Newman, a professor of chemical engineering and applied chemistry at the University of Toronto, said Sieradzki is a pioneer in methods to combat metals corrosion.

More than three decades ago, Sieradzki began delving into the complexities of percolation and produced valuable models of the outcomes that could be expected from emerging methods for that process, Newman says.

Recently, Sieradzki “has greatly expanded the content and reach of such approaches, and tested them using electrochemical methods,” Newman said. “Now he is ready to tackle pressing issues of alloy design for corrosion resistance, using his vast experience in the relevant physics and electrochemistry. Among other outcomes, his research will lead to important economies in the use of scarce metals.”

Such prominent achievements in the field led to Sieradzki’s recruitment for the new MURI project team by Mitra Taheri, a professor of materials science and engineering at Johns Hopkins University, who led work on the MURI proposal and is now the project’s principal investigator.

Taheri will lead the project’s work on reducing the time needed to determine what alloy combinations are viable for testing, using advanced microscopy to get live views of new alloys’ reactions to real-life extreme conditions.

Among those with highly specialized expertise who will be involved in the MURI project are Northwestern University Professor Christopher Wolverton and Associate Professor James Rondinelli. They will provide the computational materials science and physics Sieradzki and others will need to move forward on their parts of the research project.

Sieradzki is now also recruiting postdoctoral researchers to assist with work on the project to be done in his ASU lab, which focuses on electrochemical surface science. He also expects several graduate students to be involved over the next five years.

Sieradzki is looking forward to the outcomes of the MURI endeavor for several reasons. The work promises to lead to designs for new families of alloys, which in itself would be an important achievement, he says.

There is also the possibility of discovering more successful combinations of high-entropy alloys that would open a path toward more-resilient, high-performing materials for an array of devices, systems and processes.

Most intriguing from a larger perspective, Sieradzki said, “We’re going to try to expand some of the boundaries of where materials science and engineering can take us.”

Hitting the brain on the nose

How do odors wafting in the air, from fragrant fruits to foul stenches, guide and change behavior?This fall, Arizona State University will join institutions in a new international research network centered on the science of smell, called Odor2Action. The project will investigate how animals use odors from their environment to inform and guide their behavior, which could lead to a deeper understand...

Hitting the brain on the nose

How do odors wafting in the air, from fragrant fruits to foul stenches, guide and change behavior?

This fall, Arizona State University will join institutions in a new international research network centered on the science of smell, called Odor2Action. The project will investigate how animals use odors from their environment to inform and guide their behavior, which could lead to a deeper understanding of the function and evolution of the human brain. 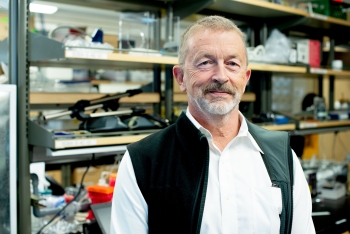 Brian Smith, inaugural Trustee Professor at ASU’s School of Life Sciences and a part of its Social Insect Research Group, will lead a group of researchers to investigate how animals use sensory structures such as nose or antennae to detect and discriminate important odors in their environment. Download Full Image

The Odor2Action network is part of the National Science Foundation’s Next Generation Networks for Neuroscience (NeuroNex) Program. The $20.2 million award encompasses 16 scientists from 16 prestigious institutions around the world, with support also from the Canadian Institutes of Health Research and the UK Research and Innovation Medical Research Council. The project will also include work from over 50 undergraduate, graduate, and post-doctoral researchers over it’s five-year period.

The network is composed of three interdisciplinary research groups designed to investigate one segment of the end-to-end process of olfactory processing. The process begins with sensory input, called active sensing, then the central processing of the scent information, or sensory coding, and finally to activation of physical behavior, called sensorimotor circuits.

Brian Smith, inaugural Trustee Professor at ASU’s School of Life Sciences and a part of its Social Insect Research Group, is the lead investigator for the active sensing group. They will investigate how animals use sensory structures such as nose or antennae to detect and discriminate important odors in their environment.

“I am interested in how brains transform the physical olfactory world into patterns of electrical activity and motor responses to help us understand and adapt to that world,” Smith said. “But I have always been concerned that we do not yet understand the fully the statistical structure of our physical world well enough to fully understand the neural activity that we can now measure. This award now lets me bring studies of the structure of the phyiscal world of odors together with advances my lab has made in the last 30 years in understanding how the brain represents and learns about important odors.”

Understanding how the brain works and produces behavior is a complex research challenge with far-reaching potential. Examining all of the steps involved in how odors are detected and encoded in the brain, and how these stimuli then produce an active, behavioral response in model species such as fruit flies and mice, will improve our understanding of these same steps in the human brain.

“The chemical sensing process (i.e. smell) evolved in the very earliest life forms on Earth,” said John Crimaldi, lead principal investigator on the network and professor in the Department of Civil, Environmental, and Architectural Engineering at the University of Colorado, Boulder. “The idea here is that all brain evolution has taken place in the presence of chemical sensing. And so, it's thought to be a primal portal from which to view brain function.”

Understanding how the human brain interprets odors to produce a behavioral response serves as a valuable model for the more general question of how the brain takes a variety of information gathered from diverse sources and methods and translates them into actions. While other systems such as memory, locations and representations of visual objects develop over many stages of processing, the system of odor processing is far more compact. This provides a unique opportunity to achieve a truly comprehensive understating of the end-to-end process.