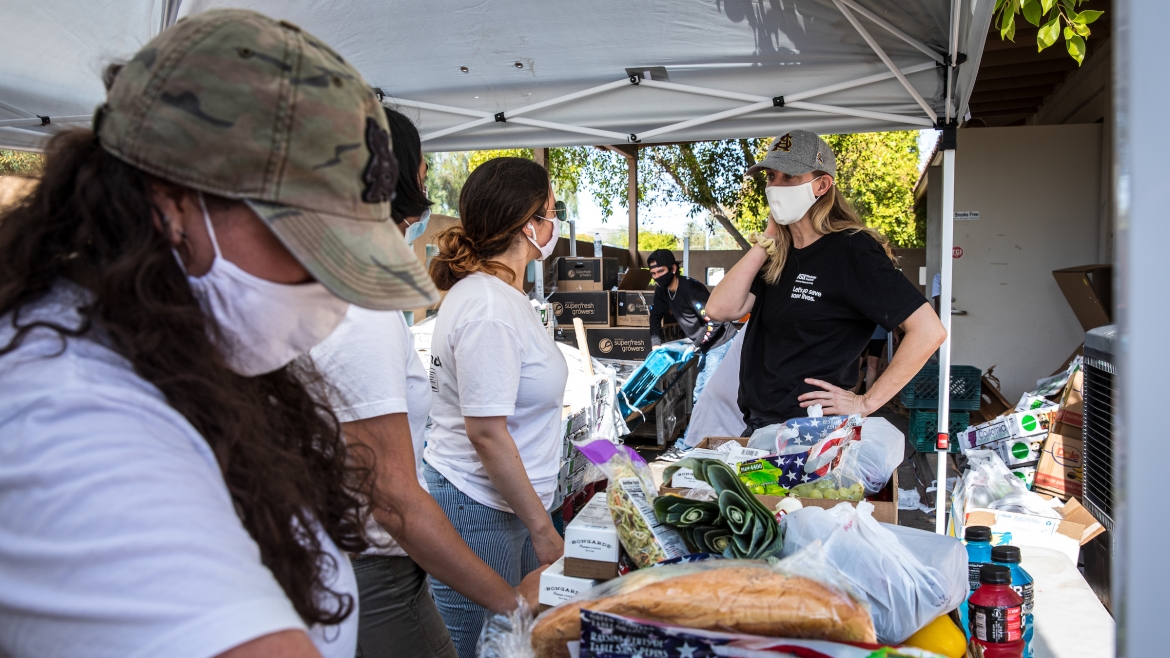 Three days a week, an Arizona State University epidemiologist leads a team into the Pascua Yaqui tribal community of Guadalupe to track and respond to COVID-19.

Megan Jehn, an associate professor in the School of Human Evolution and Social Change, brings a team of student volunteers into the community to assist with case investigations, contact tracing, delivering supplies and assessing needs.

ASU’s COVID-19 Response Team spends one day a week on food distribution and two others going into the community for to assist virus victims and support isolated individuals.

“Guadalupe is a much more tight-knit community than other places in the Valley,” Jehn said. “Everyone looks out for one another. Families are very grateful when we call. I think that they appreciate knowing that someone is checking in on them to make sure that they are OK. They appreciate the information and the support.” 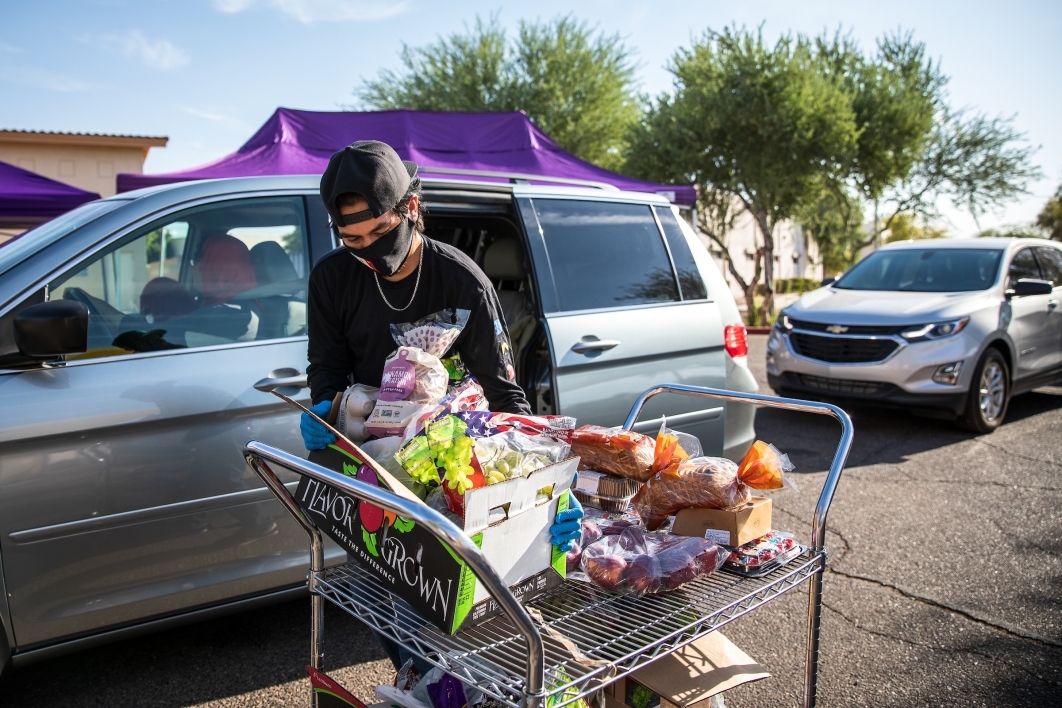 Recent ASU graduate and Community Action Program case officer Esteban Fuerte loads a box of food and supplies into a vehicle in Guadalupe on Aug. 4, 2020. 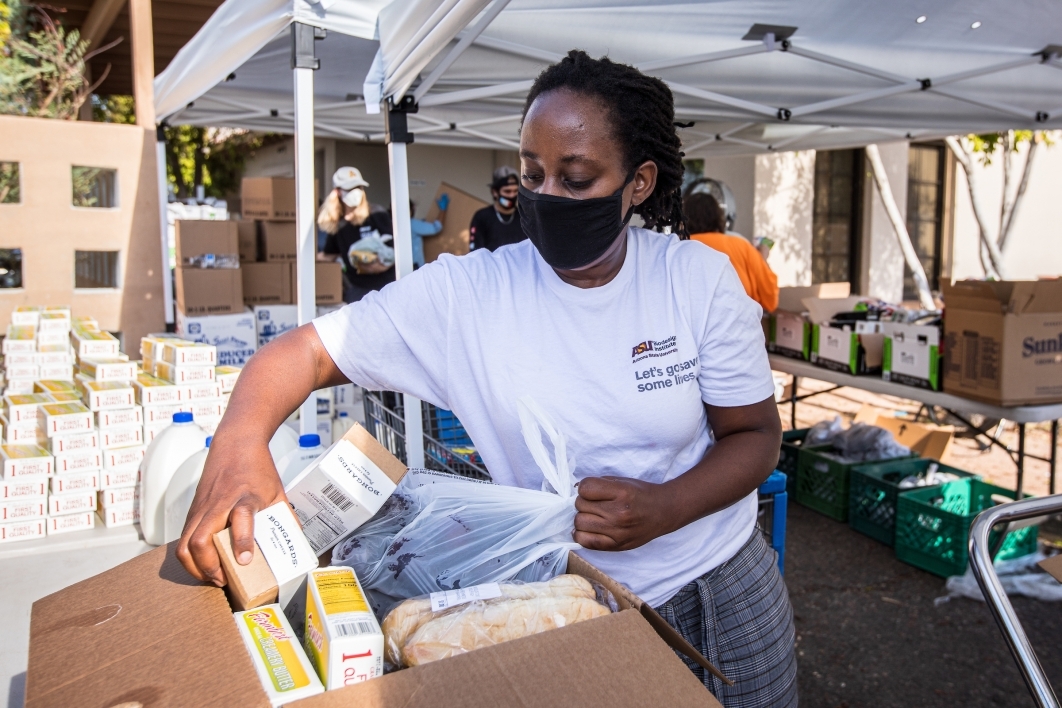 Project manager Gloria Karirirwe is a member of the team led by Megan Jehn, associate professor of epidemiology in the School of Human Evolution and Social Change, that spends one day a week with the food distribution and two others going into the Pasqua Yaqui community for contact tracing, to assist virus victims and to support isolated individuals. Recent graduate Kimberly Prete and the rest of the team joined a dozen members of Guadalupe's Community Action Program to package and hand out food to an estimated 50 vehicles.

“I agree with (Megan) about the feeling of gratitude and relief that families express when we call them and offer guidance on safe isolation,” she said. “The town and its leadership have been welcoming and the working relationship is good.”

The ASU COVID-19 Case Investigation Team is affiliated with and funded by the Maricopa County Department of Public Health. The response is a coordinated effort between ASU, MCDPH, the town of Guadalupe, the Pasqua Yaqui Tribe and Native Health.

Jesus Emiliano Galvan chose Arizona State University because of its goal to be inclusive.“ASU gave me an opportunity, so I ensure that I work hard in return,” he said.Galvan is a first-generation political science student in the School of Politics and Global Studies at The College of Liberal Arts and Sciences who often thinks about various research “puzzles.” Originally viewing political s...

Jesus Emiliano Galvan chose Arizona State University because of its goal to be inclusive.

“ASU gave me an opportunity, so I ensure that I work hard in return,” he said. Galvan is a first-generation political science student in the School of Politics and Global Studies at The College of Liberal Arts and Sciences who often thinks about various research “puzzles.” Originally viewing political science as a major to get him to law school, Galvan’s passion for the discipline came after he found political theory.

“As soon as I got to work in the Early Start Program and the POS courses my freshman year, I just fell in love with the work.”

The Early Start Program is a two-week immersion program that helps prepare incoming first-year students for their transition to ASU. Galvan attributes much of what he’s achieved thus far in college to this experience since it better helped him understand his major, connect with faculty and form relationships with like-minded students.

After his freshman year, Galvan would continue to assist the Early Start Program and participate in Junior Fellows, which gives undergraduate students the opportunity to work with professors as teaching or research partners.

His latest achievement was being selected as a member of the inaugural class for The Society for Political Methodology Undergraduate Initiative to Diversify Political Methodology. This initiative is designed to “increase the number of underrepresented students who intend to pursue an academic career in political methodology.” Through the initiative, eight students get invited to attend the first summer session of the Inter-university Consortium for Political and Social Research (ICPSR) Summer Program in Quantitative Methods of Social Research.

“I have been very fortunate to develop relationships with faculty at the School of Politics and Global Studies,” Galvan said. “Dr. Woodall actually encouraged me to apply, as the program offered a huge opportunity to further develop my research skills.”

The ICPSR summer program, which was virtual this year, provides instruction on statistical techniques, research methodologies, and data analysis. During the program, Galvan took courses like Race Ethnicity and Quantitative Methodology, which “touched on group love and the different theories regarding how it leads to group hate."

“When I saw this program advertised, I immediately thought of Jesus since he is a curious student who works hard and is interested in conducting his own political science research in graduate school and beyond,” said Gina Woodall, senior lecturer in the School of Politics and Global Studies.

Beyond the classroom, the ICPSR program connected Galvan with a network of PhD students from around the globe. He says these connections can help him gain perspective from someone who is further along in their career path.

As Galvan approaches his junior year at ASU he tries to be mindful of his time in college rather than attempt to sprint through it. He shared his appreciation for his family, friends and everyone who has been a part of his journey so far, including Woodall.

“(Dr. Woodall) sets an example of what a political scientist and professor should be,” Galvan said. “If I was ever to be a professor, I would want to be just like her.”