Dragon DNA: Sequencing the genome of the rare tuatara

New Zealand is home to an astonishingly rich web of life, with many indigenous plant and animal species found nowhere else on Earth. Even amid such exceptional biodiversity, however, the tuatara stands out as one of the most remarkable of New Zealand’s creatures.

Tuatara and related species flourished hundreds of millions of years ago, during the Mesozoic era, once inhabiting a landmass comprised of Africa, South America, Australia, Antarctica, the Indian subcontinent and the Arabian Peninsula — a supercontinent known as Gondwana. 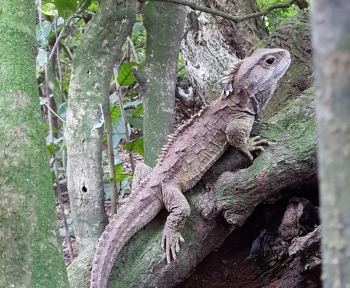 The tuatara is the last surviving member of the reptilian order Rhynchocephalia, which once flourished globally in the age of the dinosaurs. Today, they live only in New Zealand. Among the creature's unusual traits are exceptional longevity and a combination of bird and reptile characteristics that have made their position on the evolutionary tree a matter of uncertainty. Download Full Image

In the ensuing millennia, tuatara have occupied their own solitary branch on the evolutionary tree, after diverging from snake and lizard ancestors some 250 million years ago. Today, tuatara is the only living member of the archaic reptilian order Rhynchocephalia.

The species is considered a living fossil and a genetic treasure trove for researchers like Arizona State University's Melissa Wilson, a computational evolutionary biologist at the Biodesign Center for Mechanisms of Evolution and the Center for Evolution and Medicine, and associate professor at the School of Life Sciences.

In a new study, published in the journal Nature, Wilson joins an international team, led by Neil Gemmell, a geneticist at the department of anatomy, University of Otago, New Zealand, to help untangle the skein of tuatara’s outsized genome, which — at some 5 billion base pairs — is nearly twice that of humans and one of the largest vertebrate genomes on record. The new study highlights the peculiar architecture of the tuatara’s genetic composition and confirms the unique evolutionary status of this ancient reptile.

“They're as close to dragons as we have on this planet, because they are not closely related to any living reptiles,” Wilson said. “Unlike iguanas or Gila monsters or green anole lizards, tuatara are on this evolutionary branch all by themselves.”

This uniqueness makes unlocking the secrets of the tuatara challenging, as researchers have no analogous species suitable for comparison with this genomic outlier.

While tuatara represent the only extant member of Rhynchocephalia, they are a living relic of now-extinct stem reptiles from which the amniotes — dinosaurs, modern reptiles, birds and mammals — eventually evolved. Scientists believe tuatara can help fill in many pieces in the puzzle of amniote evolution.

Tuatara can live to more than 100 years of age, a biological feat likewise rooted in the animal’s unusual genome, which appears to be exceptionally effective in protecting them from disease and the ravages of age. The study also examined the genetic underpinnings of tuatara vision, smell and temperature regulation.

In addition to the large international team of researchers, the new study was conducted in close collaboration with the Ngātiwai, a Maori Indigenous tribe of Northland New Zealand, drawing on their particular knowledge of (and reverence for) the tuatara, which they consider a special treasure or “taonga.”

Gemmell cites the new study as providing a valuable template for future collaborative efforts with native communities. He stresses that one of the primary objectives of the new research is to assist long term conservation efforts and promote global awareness of the tuatara along with other endangered members of New Zealand’s spectacular ecosystem. Despite the country’s dizzying profusion of life, New Zealand is experiencing rapid biodiversity loss resulting from invasive species, habitat destruction and the effects of climate change.

Study co-author Clive Stone with the Ngatiwai Trust Board, Whangarei, New Zealand, said, "I think it is important we acknowledge some of the key Ngatiwai people that made this project possible — Nga Rangatira, Houpeke Piripi, Te Warihi Hetaraka and Hori Parata who guided us, informed us and inspired us to complete this journey.”

Wilson is also joined by co-author Shawn Rupp, a bioinformatics researcher in the Biodesign Center for Biocomputing, Security and Society and Marc Tollis, formerly with the Biodesign Institute, now a researcher at Northern Arizona University.

AI and the science of abstraction

Artificial intelligence, or AI, promises transformative innovation for transportation, manufacturing, health care and education. It may also bring freedom from tedious tasks. Imagine robots doing laundry at your home or inspecting cargo at your local airport. These scenarios are not yet reality because of a longstanding problem in the field of computing: how to manage uncertainty.“What should a ...

AI and the science of abstraction

Artificial intelligence, or AI, promises transformative innovation for transportation, manufacturing, health care and education. It may also bring freedom from tedious tasks. Imagine robots doing laundry at your home or inspecting cargo at your local airport. These scenarios are not yet reality because of a longstanding problem in the field of computing: how to manage uncertainty.

“What should a household robot do if it finds a pet cat napping in a heap of dirty clothes? Or what should an inspection robot do with an unidentified package?” asked Siddharth Srivastava, an assistant professor of computer science in the Ira A. Fulton Schools of Engineering at Arizona State University. “Constantly asking humans for help is counterproductive, and immediate communication may not always be possible. We need them to compute what to do and to fall back to humans only when necessary.” The National Science Foundation is recognizing Assistant Professor Siddharth Srivastava for his research to equip artificial intelligence with the capacity to navigate the unknowns of real-world environments. Photo by Erika Gronek/ASU Download Full Image

These examples represent what are known as open-world environments, and they are a world apart from the controlled conditions of a robotics lab. Robots and autonomous agent systems, such as Siri or Alexa, currently lack the ability to process unknowns, and relationships among those unknowns, to navigate open-world settings in a way that humans do intuitively.

Srivastava and his team at the Autonomous Agents and Intelligent Robots, or AAIR, laboratory research how sequences of decisions are made across extended periods of time amid uncertainty. In that domain, they are working to solve the problem of unknowns within AI and advance robotics to a new level of utility, reliability and safety.

“What excites me the most is determining how we can design algorithms that let AI systems automatically compute what they should do next, and then next after that, in order to reliably achieve complex, multi-step, user-assigned objectives in the real world,” he said.

Srivastava’s vision has captured the attention of the National Science Foundation, which has selected him for a 2020 Faculty Early Career Development Program (CAREER) Award. Such recognition is reserved for researchers who show the potential to be academic role models and to advance the missions of their organizations. CAREER awards provide approximately half a million dollars over five years to further each recipient’s research.

For Srivastava and his team, the key to success in this work is abstract — literally the ability to reason with abstractions.

“For instance, asking an autonomous system to bring me a cup of tea is an abstract instruction,” he said. “I don’t specify where the tea is located, how it should be made or where it should be brought. Lack of such detailed information can be viewed as an abstraction.”

He explains that the seemingly simple act of a robot delivering that hypothetical cup of tea involves thousands of decision points related to planning and movement through an uncontrolled environment. What if there are children running through the house? What if the power goes out? Humans manage these uncertainties without even thinking. But the actual process represents a distillation of critical information from a vast field of data.

“Finding concrete solutions in dynamic situations with unknown numbers and types of objects is difficult,” Srivastava said. “But in some of my earlier work, I found that identifying the right abstractions enables you to compute generalized plans or generalized solutions that work very efficiently. So, my group and I are using these methods to develop AI systems that can operate reliably and efficiently in open-world environments.”

Srivastava believes that the Fulton Schools community has the talent and resources necessary to develop the framework and the algorithms that will clear one of the biggest hurdles in AI. Through such innovation, doing the laundry may never be the same.