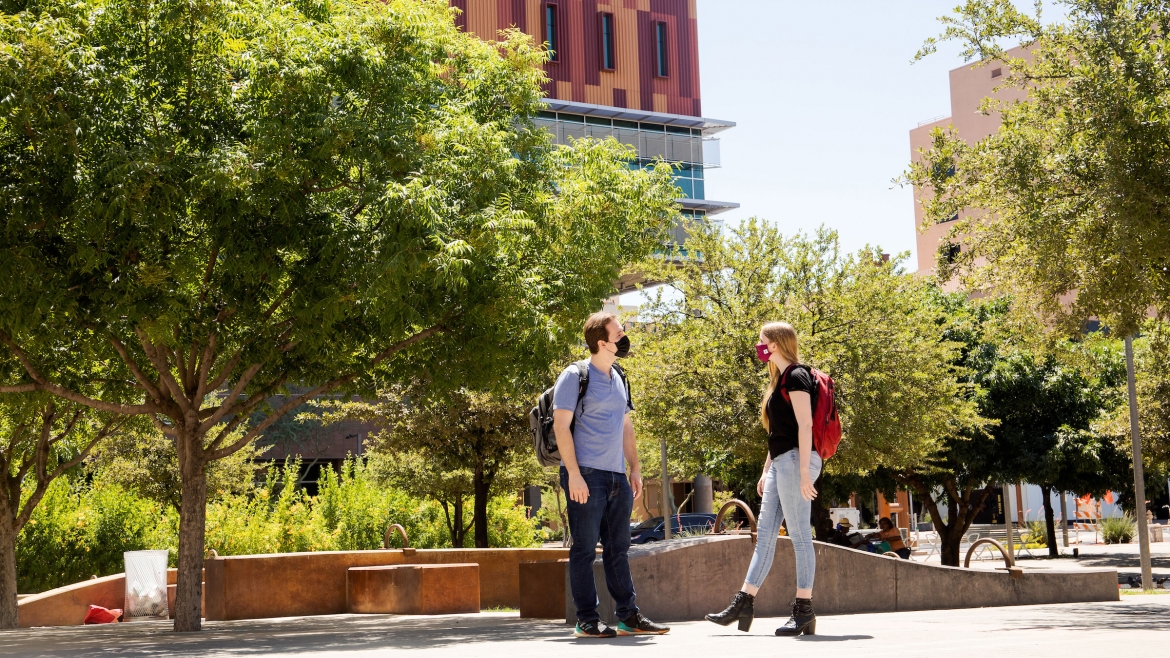 It’s unusual times during the COVID-19 pandemic, but Arizona State University has made an extraordinary shift to welcome another class of Sun Devils for fall semester.

Thousands of first-year students will be arriving on campus in the coming weeks to begin their studies, and ASU will provide a full slate of activities for Welcome Week and beyond.

But students also will be able to attend some in-person activities in small-group settings, with face coverings and physical distancing. These will include small-group residence hall floor meetings, plus walk-throughs of the Sun Devil Fitness Complex and “find-my-classes” tours of each campus, according to Joanne Vogel, vice president of student services at ASU.

The in-person activities will be organized by floors in an effort to encourage students to connect in-person in “bubbles” with their nearest peers, Vogel said.

“Students may choose to extend their social bubble beyond their roommates and suitemates to include others living on their floor or within their residence hall. But guests from other residence halls will not be allowed, as we’re asking all students to commit to limiting their in-person social interactions,” she said. “If you live in Hassayampa, you’re not allowed to visit Manzanita.”

Students also will participate in some small-group, “get-to-know-you” activities with their floormates, Vogel said.

“We’ll keep it safely distanced and informative, but we won’t leave out good old-fashioned fun,” she said.

Additionally, Sun Devil Fitness and Wellness is facilitating 170 intimate programs with students, focused on self-care and how to live well during fall semester. At the Tempe campus, students will learn skills in how to maintain “mindful moments” as well as how to “fill up (their) cup” during stressful times.

“We are hopeful that these skills will equip students with the skills they need to navigate the upcoming semester, and also provide them with skills in resiliency/strength,” said Julie Kipper, executive director of Sun Devil Fitness and Wellness at ASU.

Vogel said that ASU’s staff and students worked hard to build a start-of-the-year experience that would be meaningful for new and returning Sun Devils. That meant deciding whether some activities could still be held in person and which would be held virtually — and how to make those “remote” events creative and fun.

“We’ve put a lot of thought into these sessions to figure out the meaning behind every activity, what we hope to accomplish and how it can be accessed,” she said.

So the Engage involvement fairsPassport!, West Fest, Taylor Fest and Club Hub are being combined into the Engage! event. that introduce students to organizations on campus will be virtual this year, using a new software platform that lets them immediately interact with the members and advisers, Vogel said.

Other signature events including CultureFest and Sparky’s Day of Service also will be virtual.

“Changemaker wanted to make a strong statement with the residential colleges as partners to make sure we didn’t lose our service commitment,” Vogel said.

“They were able to figure out how they could do meaningful and impactful service online. Some examples include education around literacy and how COVID has exacerbated the conditions contributing to homelessness.”

The virtual Jason Derulo concert in June was such a success that Welcome Week organizers decided to hold the two-hour Infernofest performance remotely as well, she said. That will be from 7 to 9 p.m. Friday, Aug. 21.

“I think it will play out exceedingly well. We’ll see something that continues our tradition but within an engaging virtual space,” Vogel said.

The rescue, resilience, renewal of space

Communities are often defined by the space they take up or the marks they make. One particular space in Phoenix has impacted the surrounding cultural, religious and historical meaning for the community. That place is Beth Hebrew.A recent article about the building was published in the Journal of Arizona History by Arizona State University faculty and a graduate student: Assistant Professor of hist...

The rescue, resilience, renewal of space

Communities are often defined by the space they take up or the marks they make. One particular space in Phoenix has impacted the surrounding cultural, religious and historical meaning for the community. That place is Beth Hebrew.

Letterhead of Beth Hebrew congregation in the 1970s based on a sketch by Max Kaufman published in the Arizona Republic, July 31, 1955. Download Full Image

The team was formed in 2018 to conduct interdisciplinary research, socially embedded scholarship and cultural innovation. They hope to bring more public history to the community so everyone can learn about the space they occupy. Some of the project’s research can be found on their website.

Beth Hebrew has been many things since it opened in 1955. Starting as a midcentury synagogue, it became a Mexican American Pentecostal church and later an African American theater. After the theater troupe left, it became a graffiti-laden vacated building until 2015 and is now a restored but empty structure that lives and breathes the diverse history and culture of Phoenix.

Before it was built in central Phoenix, near Portland Avenue west of Moreland and Willmetta Streets, the future site of Beth Hebrew sat between a mostly Caucasian north and a mostly Latino southern part of the city. The 1940 census of the city shows the site sat along a still-segregated portion of the city, but had some signs of the line eroding.

The southern side of the site was neglected by officials and was often referred to as "slums,” occupied by a predominant community of color. At the time of the 1940 census, Jewish people were not recorded, but there was a large Jewish community as shown by the congregations at nearby synagogues Beth El and Beth Israel.

“While Beth Israel came to represent reform Judaism, particularly with the arrival of Rabbi Philip Jaffa in 1935, Beth El was a conservative congregation,” the article said. “Beth Hebrew complemented these nearby congregations for now more than 4,000 Jews as the city’s first Orthodox community in 1955.”

Beth Hebrew helped shape the post-World War II Phoenix area and was originally founded by the Loewy family. Elias, Berthe and Erna Loewy rescued 1,500 people from an internment camp in Vichy, France, in 1941. Their resistance and resilience led to the family rebuilding Jewish life in Europe after liberation in 1944. The Loewys eventually moved to New York in 1946 and later to Phoenix.

“In Phoenix, the Loewys did not only start a new life, they also contributed to the renewal of Jewish life spiritually, financially and socially after the Holocaust,” the article said. “Their efforts to found Beth Hebrew together with others were part of a spiritual revival of Jewish life in the 1950s that led more Jews nationwide to affiliate with a synagogue and more Jewish children to receive a Jewish education than ever before.”

The spiritual renewal of the community led to a diverse congregation at Beth Hebrew and began building collaboration and co-existence during the civil rights movement in Phoenix.

“The story of Beth Hebrew is not only important for the history of Phoenix, but for the Holocaust as a whole,” Vance said. “Not only did the Loewys escape from a camp in Vichy, but they went on to rescue 1,500 others and join resisters against Vichy and Germany. Beth Hebrew sits as a testament to those the family helped escape and to their own story of resistance and resilience.”

Rapid postwar growth and government-assisted mortgage programs facilitated many Jewish residents moving to the suburbs, and the Beth Hebrew congregation merged with the Beth El congregation in 1977.

“This demographic change brought a larger Latino/a population to Beth Hebrew’s neighborhood and finally challenged long-held segregation in Phoenix,” the article said. “Roy Delagarza, then a charismatic pastor in his early 20s, formed the Pentecostal church, Centro de Milagros, which came to represent a larger shift in spirituality among Latinos/as increasingly attracted to expressions of Christianity other than Catholicism.”

Centro de Milagros bought Beth Hebrew in the late '70s and the congregation stayed there until 1983 when they moved to a new church in Glendale. The Black Theatre Troupe moved in shortly after, taking over the space that was originally Beth Hebrew.

Black theater gained traction across the nation beginning in the 1960s and had a reputation for being controversial, but as decades passed, Black theater began to close due to lack of funding from arts organizations. However, Helen K. Mason was able to retain funding from the city and rallied the community to raise money for a new location for the troupe in 1983, the former Centro de Milagros church.

The troupe transformed the space into a black box theater and made it their home for almost two decades. Then, in 2001, an electrical fire broke out in the theater and caused the need for major renovations. The city issued a bond measure to renovate the building, which later changed to building a new theater at a different location.

“In a rapidly growing, but long segregated city, the Jewish, Latino/a and African American stories of resilience in bridging diverse cultures should be rescued and become part of the urban renewal of Arizona's capital,” Benkert said.

Beth Hebrew remained vacant for many years and was about to be demolished to make way for upscale apartments but was rescued by Michael Levine.

“Beth Hebrew is not only significant as a space reflective of diverse communities; the stories of rescue, resilience, and revival that reverberate through Beth Hebrew are unique,” the article said. “Beth Hebrew remains, resting in repose, awaiting its next calling as a space for Phoenicians to reflect these stories.”