A majority of the world's population lives on low-lying lands near the sea, some of which are predicted to submerge by the end of the 21st century due to rising sea levels. 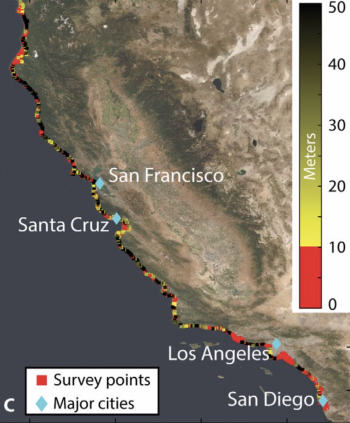 They’ve identified local hot spots of the sinking coast, in the cities of San Diego, Los Angeles, Santa Cruz and San Francisco, with a combined population of 4 to 8 million people exposed to rapid land subsidence, who will be at a higher flooding risk during the decades ahead of projected sea-level rise.

“We have ushered in a new era of coastal mapping at greater than 1,000-fold higher detail and resolution than ever before,” said Manoochehr Shirzaei, who is the principal investigator of the NASA-funded project. “The unprecedented detail and submillimeter accuracy resolved in our vertical land motion dataset can transform the understanding of natural and anthropogenic changes in relative sea-level and associated hazards.”

The research team included graduate student and lead author Em Blackwell, and faculty Shirzaei, Chandrakanta Ojha and Susanna Werth, all from the ASU School of Earth and Space Exploration (Werth has a dual appointment in the School of Geographical Sciences and Urban Planning).

Blackwell, who prefers they/them pronouns, had a keen early interest in geology, and as they began graduate school, the applications of InSAR drew them to pursue this project. InSAR uses radar to measure the change in distance between the satellite and ground surface, producing highly accurate deformation maps of the Earth’s surface at 10s m resolution over 100s km spatial extent.

Land subsidence can occur due to natural and anthropogenic processes or a combination of them. The natural processes comprise tectonics, glacial isostatic adjustment, sediment loading and soil compaction. The anthropogenic causes include groundwater extraction and oil and gas production.

As of 2005, approximately 40 million people were exposed to a 1-in-100-year coastal flooding hazard, and by 2070 this number will grow more than threefold. The value of property exposed to flooding will increase to about 9% of the projected global gross domestic product, with the U.S., Japan and the Netherlands being the countries with the most exposure. These exposure estimates often rely only on projections of global average sea level rise and do not account for vertical land motion.

The study measured the entire 1350-kilometer-long coast of California from 2007–2018, compiling thousands of satellite images over time, used for making a vertical land motion map with 35 million pixels at ~80 m resolution, comprising a wide range of coastal uplift and subsidence rates. Coastal communities’ policymakers and the general public can freely download the data.

“The vast majority of the San Francisco Bay perimeter is undergoing subsidence with rates reaching 5.9 mm/year,” said Blackwell. “Notably, the San Francisco International Airport is subsiding with rates faster than 2.0 mm/year. The Monterey Bay Area, including the city of Santa Cruz, is rapidly sinking without any zones of uplift. Rates of subsidence for this area reach 8.7 mm/year. The Los Angeles area shows subsidence along small coastal zones, but most of the subsidence is occurring inland.”

In the decades ahead, the coastal population is expected to grow to over 1 billion people by 2050, due to coastward migration. The future flood risk that these communities will face is mainly controlled by the rate of relative sea-level rise, namely, the combination of sea-level rise and vertical land motion. It is vital to include land subsidence into regional projections that are used to identify areas of potential flooding for the urbanized coast.

Beyond the study, the ASU research team is hopeful that others in the scientific community can build on their results to measure and identify coastal hazards more broadly in the U.S. and around the world.

ASURE has been awarded a contract that could total as much as $42.4 million over the next five years to advance unmanned and robotic technologies and weapons systems.The Naval Postgraduate School in Monterey, California, awarded $12 million now to the Arizona State University-affiliated applied research lab to solve the initial task and is offering the opportunity for an additional $30.4 million ...

Naval Postgraduate School award could total as much as $42.4M

ASURE has been awarded a contract that could total as much as $42.4 million over the next five years to advance unmanned and robotic technologies and weapons systems.

The Naval Postgraduate School in Monterey, California, awarded $12 million now to the Arizona State University-affiliated applied research lab to solve the initial task and is offering the opportunity for an additional $30.4 million for subsequent tasks. There are nine task groups in total and, according to Naval Postgraduate School, this is the school’s largest task order contract ever awarded for unmanned systems and robotics. It is also the largest contract ASURE has been awarded. 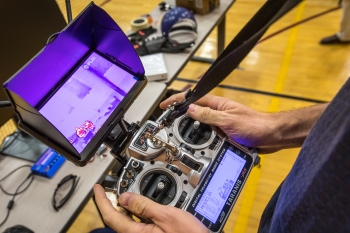 “This is the biggest award we’ve ever had,” said Claudia ElDib, program manager for ASURE, adding that completion of this opportunity could pave the way for additional grants for ASURE.

ASURE is a nonprofit organization and exemplifies a new prototype for the academic applied research lab that leverages ASU’s innovative resources to rapidly solve grand challenges with high-impact solutions for local, state and national government agencies and companies. ASURE’s expertise centers on translating ideas into dual-use solutions for technology, engineering, safety and security sectors, meaning they solve for commercial and military problems.

ASURE will work closely with Ira. A. Fulton Schools of Engineering faculty who want to participate in research, analysis and prototype development of hardware and software for use by U.S. military, civilians and U.S. partner nations. Faculty will focus on artificial intelligence, cyber solutions, weapons payloads, navigation and intelligence sensors and many other areas related to robotics and unmanned technologies.

“This collaboration leverages the multidisciplinary expertise that exists within the Fulton Schools and ASURE’s objective of conducting applied research,” said Kyle Squires, dean of the Fulton Schools at ASU. “Our faculty has made significant progress to achieve broader technological capabilities and understandings of these areas in recent years, so we are eager to work with partners to develop and test robotic and autonomous systems.”

The work is broad and covers a variety of areas so faculty from several specialties can participate, ElDib said. Some of the projects will be classified work, and ASURE can assist faculty who need to obtain credentials to pursue classified work, she said.

Historically, many products that are developed through these types of government research programs later become commonplace in the civilian market — such as plastic containers, GPS systems and cybersecurity, ElDib said.

“Upon completion of the projects, ASURE and ASU would be talked about not just in a naval context but with other government institutions,” she said. “The impact could be profound.”